LOUISVILLE, Ky. (WDRB) – If Braidy Industries Inc. follows through on a plan to build a $1.3 billion aluminum mill in eastern Kentucky, the state stands to benefit in ways beyond landing 550 new, well-paying jobs in a region that desperately needs them.

Kentucky taxpayers are literally invested in the success of the proposed plant.

In late April, Gov. Matt Bevin announced that Braidy Industries – a new venture led by metals industry veteran Craig Bouchard – had chosen Greenup County, outside of Ashland, to build what’s been called the most sophisticated aluminum mill in the world.

A week later, Bevin’s administration used $15 million in borrowed money to buy stock in the company.

Taxpayers now own at least 20 percent of Braidy Industries, making Kentucky either the biggest or second-biggest investor in the company alongside Bouchard, according to state documents released Thursday.

Kentucky’s direct investment in Braidy Industries went beyond the state’s normal efforts to attract big industrial job creators – and that of most other states.

“It is rather unusual to see a state put equity into a business that is locating in their state,” said Jeff Finkle, president of the International Economic Development Council, a group that includes the commonwealth.

But the $15 million investment received little scrutiny from state lawmakers, who unanimously approved the new debt in the waning hours of the legislative session in March.

At the time, all legislators knew was that the governor needed the money to land a big economic development project in the struggling eastern part of the state.

“It was never debated. It was just railroaded through with a plea to help eastern Kentucky,” said state Rep. Jim Wayne, D-Louisville.

Julia Crigler, director of Americans for Prosperity’s Kentucky chapter, said Braidy Industries' decision had more to do with the state's new right-to-work law prohibiting mandatory union dues than with the state's direct investment in the company.

"We oppose the taxpayer handout and believe right to work will do far more to attract new businesses than cronyism ever could," she said.

Jim Waters, president of the Bluegrass Institute, a free-market think tank, said state government should steer clear of “picking winners and losers” in the economy.

“If the private sector wouldn’t take on that risk of borrowing those dollars, why should the taxpayers be put at risk?” he said.

Waters worries about the state creating an “un-level playing field.” What if tax dollars help Braidy Industries put other tax-paying aluminum plants out of business?

If a competitor plant comes in to challenge Braidy, would the state government have to invest in it, too? Or would it put up roadblocks to protect its investment in Braidy?

For those types of reasons, economists are “often leery of government ownership of firms,” said Christopher Bollinger, a University of Kentucky economics professor and director of UK’s Center for Business and Economic Research.

“If the company begins to fall on hard times there would be substantial pressure on the state legislature to help support them, lest we lose our investment,” he said.

Bevin, a fiscally conservative Republican, has defended the investment by saying Kentucky’s $15 million stake could be worth $250 million in 5 to 6 years if the company hits its profit targets. He said it can’t be considered a “handout” because state taxpayers stand to receive a return if the plant is successful.

“The fact that they were willing and able to allow us to invest in that company is an extraordinary opportunity,” Bevin said at a May 26 press conference.

Kentucky’s direct investment in Braidy Industries is in addition to the “incentives” the state routinely offers to land new factories and other job creators.

Braidy Industries will also be able to collect $12.5 million in more typical incentives, which are determined by a company’s investment in the state, how many jobs it creates and the average wage of those positions.

While state officials are “very comfortable” with the business case for the $15 million investment, the primary motivation behind it was to match an unspecified state’s offer for the aluminum plant, said Terry Gill, Bevin’s economic development secretary.

“It came down to one other state, and that state had offered up this direct investment as part of their last best offer,” Gill said in an interview this month.

Gill played down concerns about state government becoming a player in the market economy.

“We don’t want to, nor should we, nor can we impact the marketplace writ large,” Gill said. “The market dynamics have to play themselves out. But at the same time, we have to be opportunistic.”

Taxpayers are going to have to take the governor’s word, however, that Braidy Industries’ stock makes for a compelling use of state dollars.

The Bevin administration denied WDRB’s requests under the Kentucky Open Records Act to see the financial projections state officials reviewed when they decided to buy into the company.

In releasing documents related to its May 4 purchase of the stock, the state unit that made the deal concealed key information, such as the names and addresses of the other investors in Braidy Industries and the amounts they put into the company. Braidy Industries was incorporated in March.

The state’s 3 million shares represent about 15 percent of the stock Braidy Industries is authorized to issue, but the redactions make it impossible to tell how many shares have actually been issued.

Only two investors – the state and Bouchard -- own at least 20 percent of the company, according to documents released Thursday by a state board as it approved Braidy Industries for $2.5 million in sales tax rebates on construction materials for the aluminum mill. 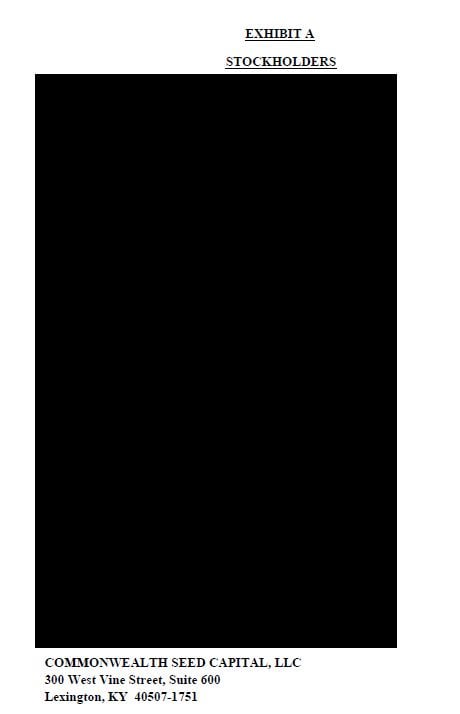 It appears, from the redacted stock sale documents, that there are 5-7 other investors in the company.

The fact that Kentucky won’t disclose who those investors are is a “big red flag,” said Greg LeRoy, executive director of Good Jobs First, a Washington, D.C. nonprofit organization that advocates transparency and accountability in economic development incentives.

Without disclosure, there is no way to be sure those investors aren’t family members of state officials or have other connections that might pose conflicts of interest, he said.

“You can’t tell whether there has been any sort of insider dealing. There is no reason those identities should be masked,” LeRoy said.

The $15 million was channeled to Braidy Industries through Commonwealth Seed Capital, a state-owned limited liability company set up in 2001 to invest in high-risk, early-stage startup companies in industries like information technology, bioscience and pharmaceuticals.

“You have to look at the interest of Braidy, and what they disclose in those documents is not intended to be for public consumption,” said Gill, the secretary of the Kentucky Cabinet for Economic Development. “They certainly don’t want these documents to be public.”

“Is there risk? Of course there is. But (the plant) has potential to be transformative,” he said.

Gill also confirmed that, for the investment to succeed, the state will need a return that exceeds the interest it will owe on the $15 million debt.

“If you view this from a private-equity perspective, they are not looking for a single-digit return,” he said, adding that those types of investments are aimed at doubling or tripling in value.

The documents show that Kentucky secured some basic protections for its $15 million.

For example, if Braidy Industries fails to start on the plant by mid-2018 or to invest at least $1 billion in the facility by mid-2020, the state can demand the money back from the company with interest.

Braidy Industries also promised to put its headquarters and at least 51 percent of its employees and assets in the commonwealth at least until June 1, 2022, according to the documents.

Bouchard, the CEO of Braidy Industries, did not return an inquiry submitted through the company’s website.

The state set up Commonwealth Seed, based in Lexington, in 2001 to make investments and loans to early, high-risk ventures started by local entrepreneurs, such as university researchers.

But documents show the $15 million stake in Braidy Industries doubled Commonwealth Seed’s portfolio overnight, making it by far the biggest bet in the company’s 16-year history. Before Braidy Industries, the company had not injected more than $1.2 million into a single company.

“Historically, they are looking at much smaller companies ... (Braidy) is obviously substantial player in the market,” Gill said.

Commonwealth Seed’s holdings are split between start-up companies in industries like technology and bioscience, and regional “angel” funds that provide cash to fledgling companies in those same fields, according to documents obtained in an open records request.

The goal of the company is to fund new investments using the profits from previous investments.

It’s too soon to say whether any returns from the Braidy Industries investment, should they come to pass, would remain in Commonwealth Seed to fund new companies or flow back to the state for more general purposes, like alleviating the pension crisis.

“I am looking forward to that problem,” Gill said. “…If we had that pool of capital to attract more businesses, I think that would be a tremendous asset to the state.”

Many states have “seed and venture funds” like Commonwealth Seed, said Finkle, of the Washington, D.C.-based International Economic Development Council.

But those funds normally are not used to attract big employers; instead, they typically fund local entrepreneurs with smaller investments, Finkle said.

He said it’s worth noting that Kentucky officials evidently faced a tough tradeoff in wooing Braidy Industries – match another’s state offer or risk losing a badly needed infusion of jobs and investment in a poor part of the state.

“Unfortunately those are the flips of the coins that people in the economic development business have to make,” he said.

The Kentucky Chamber of Commerce, which spent the most of any group lobbying the General Assembly this year, supports the investment in Braidy Industries and thinks future taxpayer investments in companies ought to be weighed on a “case by case” basis, according to spokeswoman Ashli Watts.

“At that moment, Braidy Industries coming to Ashland was the right decision -- if that’s what it took to get them there,” she said.

The company in which Kentucky taxpayers are investors is still trying to raise money for the Ashland project despite a $200 million commitment from Russian aluminum giant Rusal.