LOUISVILLE, Ky. (WDRB) -- A grand juror in the Breonna Taylor case is asking a judge to release evidence from last week's deliberations, including transcripts and recordings, so that the public can access the “full story and absolute truth.”

The juror, who is not named in court documents filed Monday in Jefferson Circuit Court, wants the grand jury proceedings to be made public, in part to protect jurors from backlash. 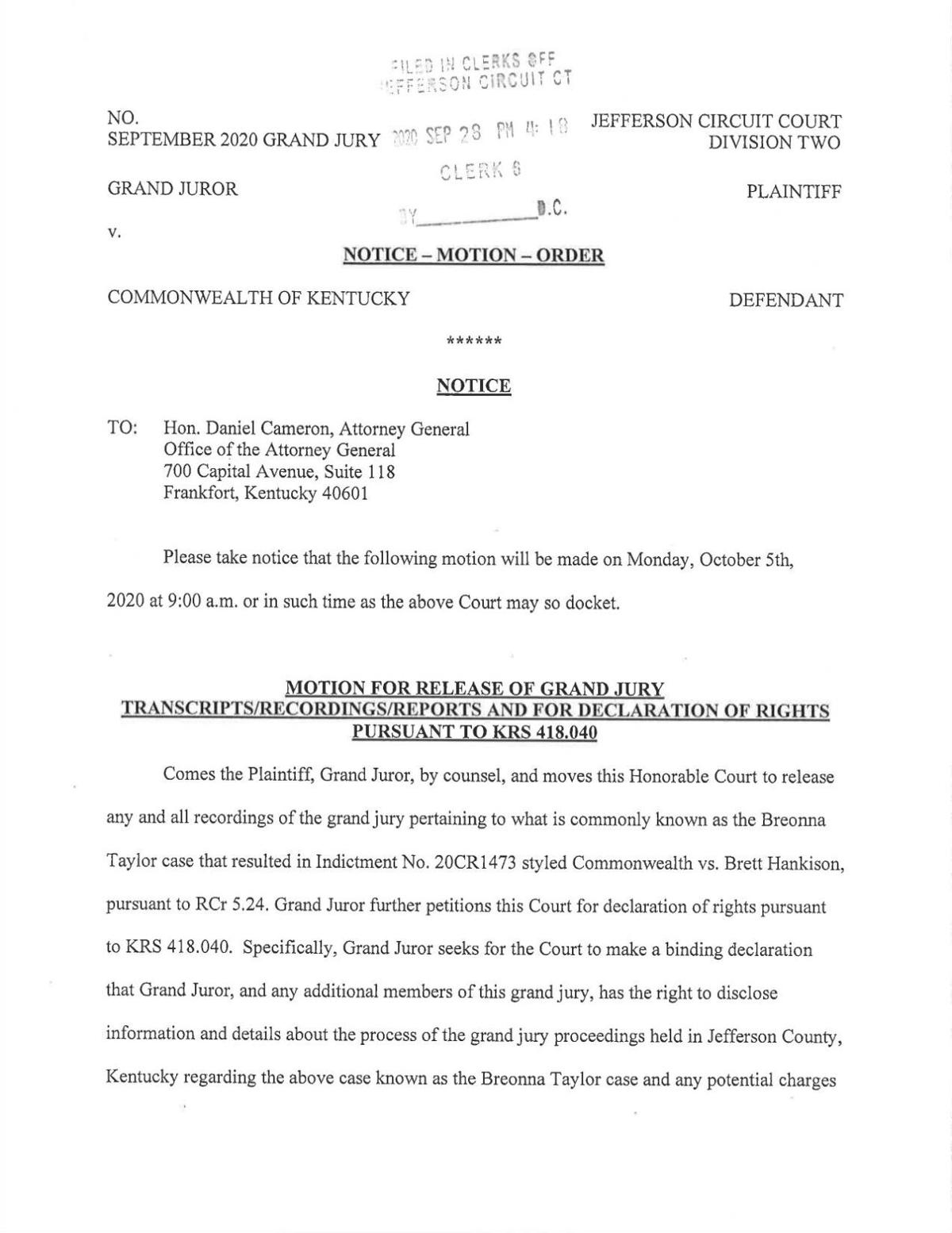 The motion claims that Kentucky Attorney General Daniel Cameron made "definitive comments" last week when he discussed his office's investigation into Taylor's shooting and the grand jury proceedings, which his staff oversaw.

And it notes that Cameron told reporters that the grand jury "agreed" that Louisville police officers Sgt. Jon Mattingly and Detective Miles Cosgrove were "justified" in the shooting. According to Cameron's office, those officers fired into Taylor's Springfield Drive apartment after Kenneth Walker, Taylor's boyfriend, fired first.

The grand juror also notes that Cameron "attempted to make it very clear that the grand jury alone made the decision on who and what to charge based solely on the evidence presented to them."

"The only exception to the responsibility he foisted upon the grand jurors was in his statement that they 'agreed' with his team's investigation that Mattingly and Cosgrove were justified in their actions," the juror's motion says.

And it suggests that Cameron, a Republican in his first term as the state's attorney general, is using the grand jurors "as a shield to deflect accountability and responsibility for these decisions."

Cameron declined last week to say whether his office made any recommendations to the jury. Instead, he said the jury reached its decision to charge former Louisville police Detective Brett Hankison after reviewing all the evidence.

Cameron said in a statement Monday night that he will release the grand jury recording on Wednesday, complying with an order issued Monday by Jefferson Circuit Judge Ann Bailey Smith.

"We have no concerns with grand jurors sharing their thoughts on our presentation because we are confident in the case we presented.  Once the public listens to the recording, they will see that over the course of two-and-a-half days, our team presented a thorough and complete case to the Grand Jury," the statement said.

"Our prosecutors presented all of the evidence, even though the evidence supported that Sergeant Mattingly and Detective Cosgrove were justified in their use of force after having been fired upon by Kenneth Walker. For that reason, the only charge recommended was wanton endangerment."

At the same time, Cameron's statement said his team stands by "our belief that such a release could compromise the ongoing federal investigation and could have unintended consequences such as poisoning the jury pool."

The anonymous juror alleged that the legal system placed the grand jury on on island "where they are left to wonder if anyone who finds them will treat them well or hold the pain and anger of the lingering questions against them,” the juror wrote. “Their choices are to remain there hoping they are never found or attempt to find a way to a safer position.”

Taylor, a Black woman, was shot by white Louisville Metro Police officers in a raid on her apartment on March 13.

The grand jury last Wednesday indicted Hankison on three felony counts of wanton endangerment for shooting into a nearby apartment during the raid. Neither Hankison nor the two other officers who fired their weapons, Mattingly and Cosgrove, were indicted in Taylor's death.

Earlier on Monday, the judge in Hankison's case ordered that evidence, including the grand jury transcript or recordings, be filed in the court file, rather than just between the prosecution and defense.

Taylor's death has prompted monthslong protests in Louisville and has amplified a national debate about police brutality and racial injustice. Protests continued after the grand jury announcement, though they have been tempered by heavy police presence in downtown Louisville and a nightly 9 p.m. curfew that ended at 6:30 a.m. Monday.

Gov. Andy Beshear, Mayor Greg Fischer and others have called on Cameron to release more information, and attorneys for the Taylor family and Walker already have asked the court to make the grand jury proceedings public.

The grand juror who filed the notice Monday said he/she does not seek any monetary damages.

“Only the truth, the whole truth, and nothing but the truth,” the notice reads.