LOUISVILLE, Ky. (WDRB) -- Genesis Washington, a sixth-grader at Noe Middle School, was assaulted earlier this month, and video was shared on social media.

Genesis was sitting with several other students in the gym last Thursday waiting for the second buses to arrive. She said a girl she didn't really know came up to her.

"I guess she thought she could be the bully herself," Genesis said as she began to cry.

She was bullied and brought to tears.

"I just hate getting bullied, because I just get scared," she said, adding that she doesn't want to go back to school. "Who knows what will happen?"

Her mother, BoShanta Coleman said the girl who repeatedly punched Genesis  was given a three-day suspension.

The video would go on to be shared hundreds of more times before it was taken down.

In the first 74 days, there were 7,918 suspensions across JCPS, averaging out to 107 a day. One-hundred-fourteen suspensions were just at Noe Middle School.

"My daughter has been bullied before, and it put her in a dark place," Coleman said. "She verbalized she wanted to kill herself because she was being bullied."

Coleman and Genesis are now trying to raise awareness about the violence and bullying in schools. Coleman said while JCPS claims there was staff in the gym with about 150 students waiting for the bus, Genesis said no employees were there.

JCPS said three students involved have been disciplined but wouldn't say exactly how.

"I feel like JCPS is trying to sweep it under the rug," Coleman said.

JCPS said there's about a 5% increase in suspensions over this time last year. Suspensions have steadily gone up over the past five years, reaching a high of more than 23,000 in the 2017-18 school year then dropping to more than 20,000 last school year.

"While we have seen a slight increase in suspensions from where we were this time last year, we remain committed to creating positive school environments.  We are taking a proactive approach to engage students in learning that we believe will lead to a decrease in suspensions and behavior events over time.  JCPS has provided more trainings for staff and resources for schools to support students than ever before."

Here are the top five JCPS schools for suspensions so far this school year: 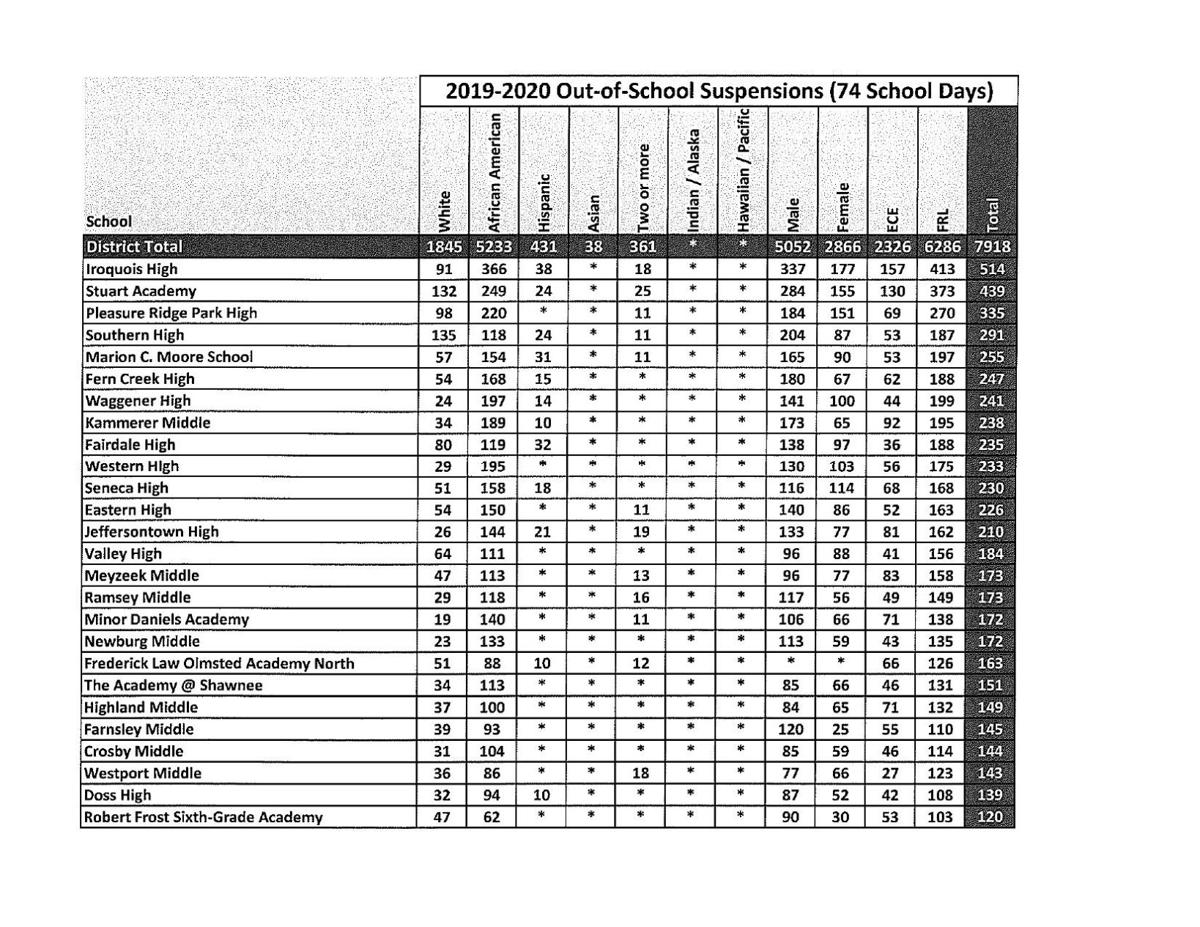 Genesis said she sees violence all the time.

"When I started being second run, I was on second run for two week,s and there was fight every day in the morning and afternoon," she said.

And sometimes, the violence and bad behavior in the schools can also spill onto the buses. Records show there have been 2,071 bus suspensions for the first 74 days of the school year, with an average suspension of more than two days.

The schools with the top number of bus suspensions so far this school year: 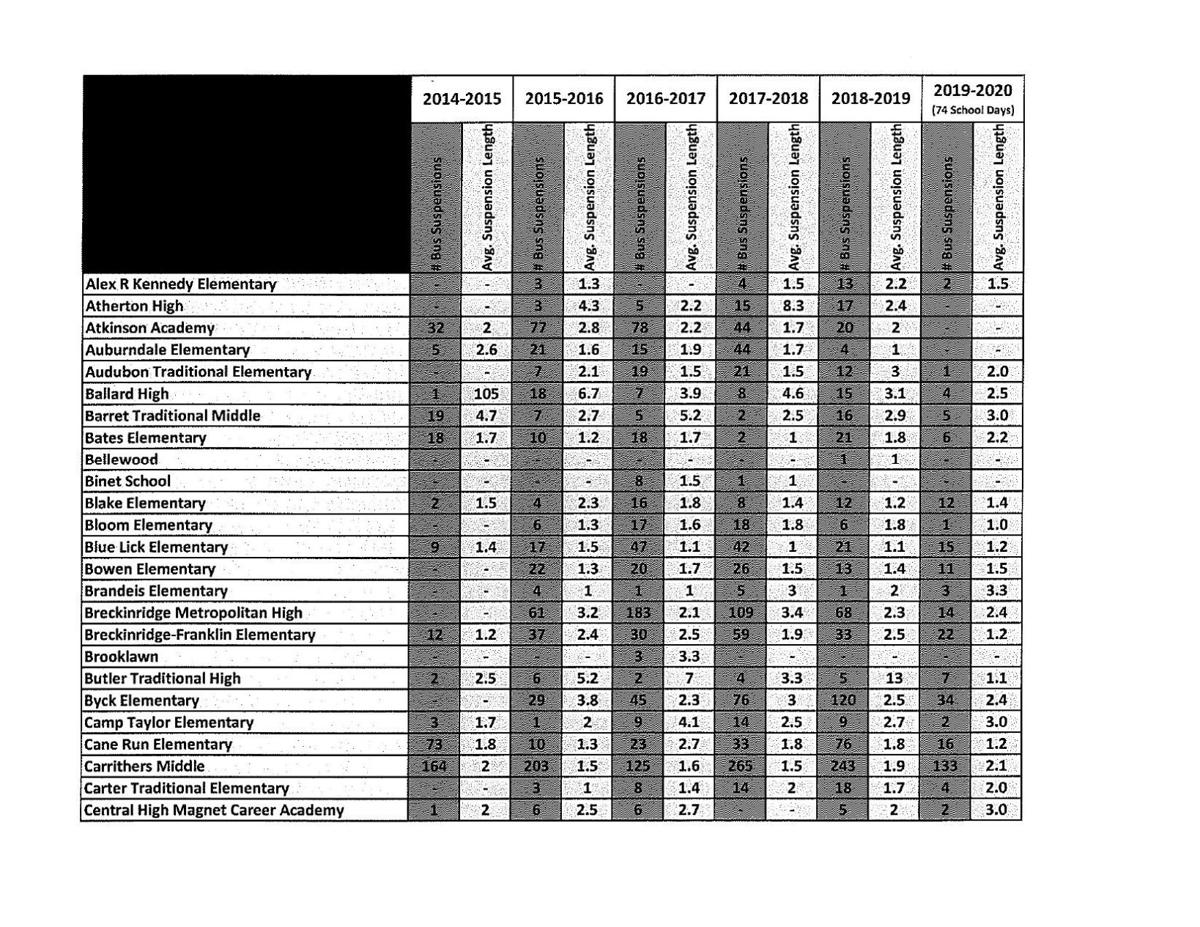 “Every school day, 70,000 students are transported on 900 Jefferson County Public Schools buses," Hebert said. "The buses are safe, so are the students, our trained drivers and monitors on those buses. And while we expect our students to carry themselves in a respectful way to, from and in school, we acknowledge that incidents happen. When they do, the students’ school principal has full authority to decide any appropriate discipline.”

As for Genesis' case, JCPS said the school administration is working with the families of both students on the next steps.

Genesis is hoping what happened to her will bring change. She wants to create a peacemaker club and is returning to school. She and her mother had discussed transferring, but they're trying to see how school is with more support.

"She knows about being bullied firsthand," Coleman said. "She can be a voice for somebody else."

If you've been bullied at a JCPS school, the district offers these resources and help.