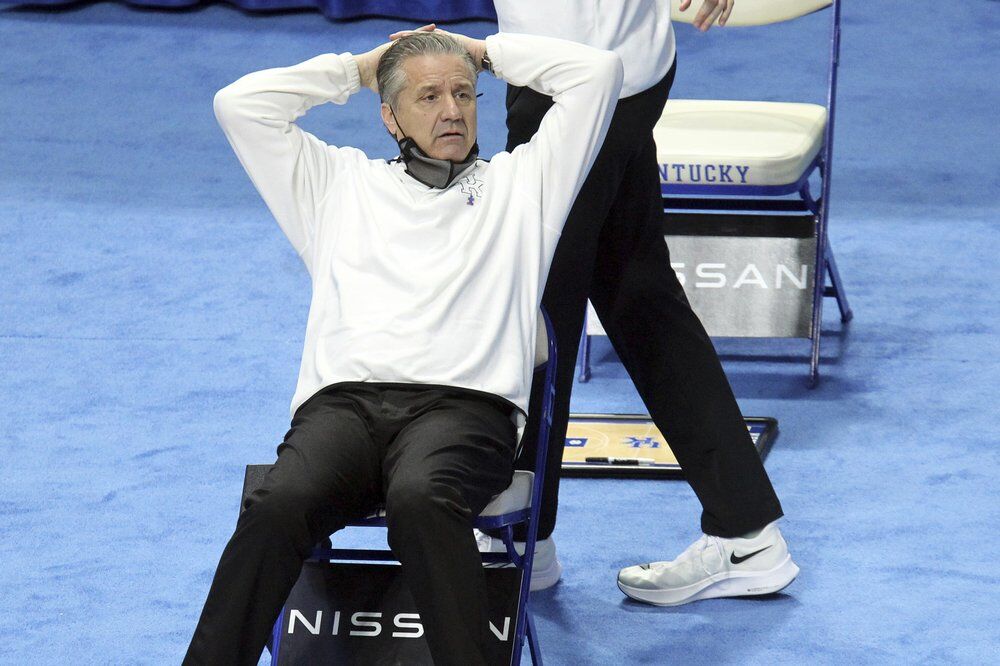 Nothing wrong with that. Coaching is cruel. Celebrate every W.

But it could be the last time he laughs at Calipari’s expense. COVID-19 and karma can be a crushing combination.

Louisville and Kentucky will not play their annual hissing contest Wednesday night in Rupp Arena. The Cardinals announced Monday that the program moved into a COVID-19 pause because of multiple positive tests.

I hope Malik Williams and any U of L player, coach or staff member who might be in COVID-19 protocol gets healthy before this column is posted. This virus has turned too many lives upside down.

But what a difference a year makes.

Only 359 days ago, Louisville defeated Kentucky, 62-59, at the KFC Yum! Center, which was mostly empty because of concerns about the the virus.

It was Mack’s first victory in three tries against Calipari’s program. Cards fans were ecstatic. Mack was not — at least publicly. He spoke with the excitement of a guy who had just beaten Lexington Bryan Station.

No big deal. There were bigger games ahead in the Atlantic Coast Conference. Just one game. Play on.

Then Mack got a lesson in Social Media 101.

Somebody leaked a video taken at the head coach’s house. Upon further review, there was Mack cheering on former U of L football star Eric Wood in an epic rant about how Calipari’s days of dominating Louisville were over because former Card Kenny Payne was no longer in Lexington to recruit and develop Kentucky’s roster.

It looked like they were celebrating a four-game sweep of the Golden State Warriors. All that was missing was the champagne. It was a joke among friends that landed like an air ball.

One more note: Nobody was wearing a mask, barely more than a week after Louisville came off a COVID-19 pause, one of two the Cards endured last season

Mark that down as the last time Mack laughed at Calipari’s expense. Both teams trudged through miserable seasons, missing the 2021 NCAA Tournament: Kentucky by a mile, Louisville by a one victory.

Both coaches were motivated to restructure their coaching staffs.

Calipari did it like a champion. He didn’t say a discouraging word until he helped former assistant Joel Justus land at Arizona State and Tony Barbee secure the head coaching job at Central Michigan. If there were hard feelings, they didn’t percolate into the news cycle.

Mack did it like he needed a mulligan. Luke Murray went from star in the making to Who’s Luke Murray? Dino Gaudio left with a full-throated howl that was heard at the U of L president’s office as well as NCAA headquarters.

Mack lost a 30-year family friend. He lost six games and more than $200,000 to a suspension approved by UofL President Dr. Neeli Bendapudi.

He also lost respect from some peers in the coaching community for secretly tape-recording a conversation with Gaudio, a conversation eventually handed to the FBI and talk radio.

That’s how you break-up with a friend you considered your mentor? Had to be a better way.

The scoreboard shows advantage Calipari in the restructured UK and U of L staffs, too.

He had no coaching experience in college basketball.

According to 247Sports, Louisville’s 2022 recruiting class ranks 82nd in the nation and 13th in the Atlantic Coast Conference. It features a three-star who committed before Mack changed his staff as well as a center from the Bahamas who has great measurements but no credentials (or stars) with the recruiting gurus.

And about that Louisville offense that was supposed to be upgraded?

Until this season, Mack had not lost a non-ACC game to a team ranked worse than 52 while coaching at Louisville.

A trip to Kentucky on Wednesday night gave Mack and the Cardinals a chance to change that narrative. Louisville was likely to be a nine-point underdog, but it was Louisville’s last chance to add a significant non-conference win to its resume.

Now the game is postponed. It could be canceled. And the good times from last Dec. 26 look like the last time Mack will laugh at Calipari’s expense.