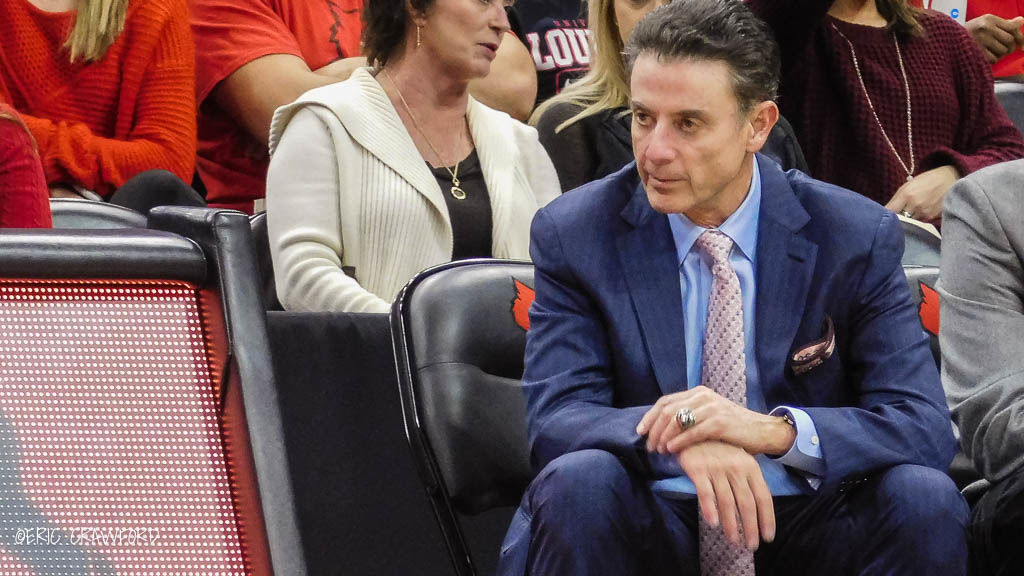 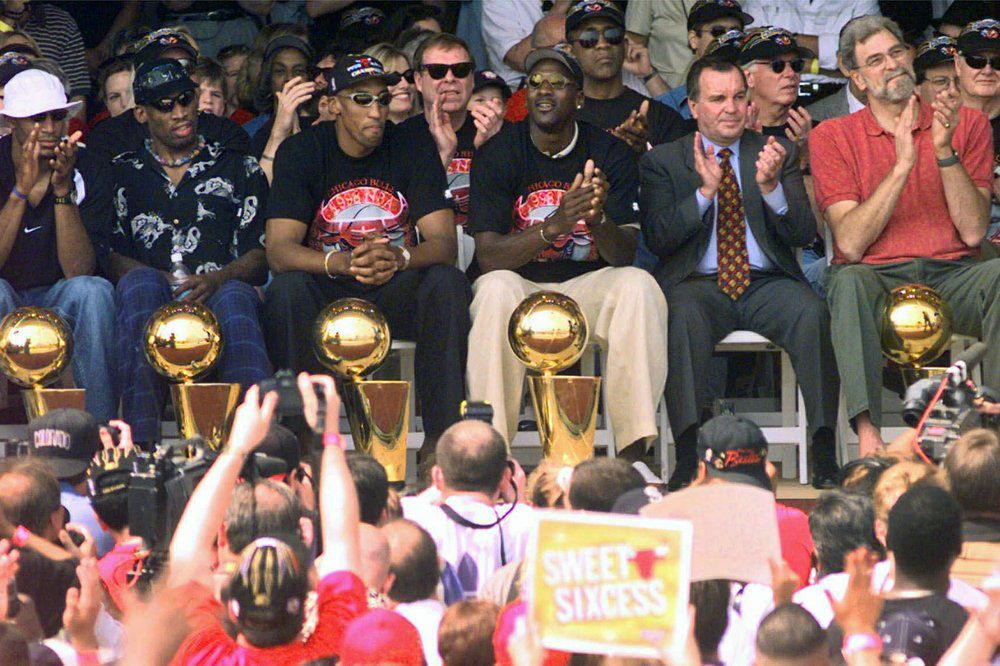 FILE - In this June 16, 1998, file photo, NBA Champions, from left: Ron Harper, Dennis Rodman, Scottie Pippen, Michael Jordan and coach Phil Jackson are joined on stage by Chicago Mayor Richard Daley, second from right, during a city-wide rally in Chicago to celebrate the Chicago Bulls 6th NBA championship. Jordan described his final NBA championship season with the Chicago Bulls as a “trying year.” “We were all trying to enjoy that year knowing it was coming to an end,” Jordan told Good Morning America on Thursday, April 16, 2020. (AP Photo/Beth A. Keiser, File)

LOUISVILLE, Ky. (WDRB) -- The University of Louisville landed Rick Pitino as its basketball coach in 2001 because Rick Pitino did not land Tim Duncan as his No. 1 draft pick with the Boston Celtics in 1997.

That has always been The Story — and a legitimate story at that.

But with all the conversation and whispers surrounding “The Last Dance,” ESPN’s 10-part documentary about the breakup of the Michael Jordan/Scottie Pippen Chicago Bulls’ dynasty, it was inevitable Pitino would work his way into the conversation.

Credit Sam Smith, the irrepressible NBA writer who wrote the best-seller, “The Jordan Rules.” After a long, distinguished career at The Chicago Tribune. Smith writes for NBA.com. He appeared with Scott Van Pelt on ESPN Sunday night to discuss “The Last Dance.”

Early in Pitino's first year with the Boston Celtics, Smith said, Pitino was eager to acquire the disgruntled Pippen from the Bulls.

Remember, after taking Kentucky to the NCAA championship game in 1997, Pitino bolted for the Celtics that spring (a year after he turned down the New Jersey Nets a job that eventually went to John Calipari).

In Boston, Pitino would have two first-round draft picks. With the league’s worst record, Boston had the best odds of earning the top pick in the lottery for the NBA Draft — in what was essentially a one-player draft led by Tim Duncan of Wake Forest.

Pitino has repeatedly said that he felt confident that Duncan was bound for Boston.

Boston failed to win the lottery. The Celtics settled for picks No. 3 and 6.

This is the point where Smith wrote that Pitino “panicked.” Duncan would have been guaranteed shortcut to jump-start the Celtics’ rebuild. Duncan took Gregg Popovich and the Spurs to five NBA titles.

Here is part of what Smith wrote:

"The lottery balls came up tilt and the Celtics got the No. 3 pick in a one-player draft. So incoming coach Rick Pitino panicked. He needed to hit the ground running, so he reached out to the Bulls about Pippen. Boston had two of the top six picks and veterans to spare. Krause saw the future. He believed with Pippen needing yet another surgery, it was a rare opportunity to cash in a big name without that same big game anymore for the foundation for the future, Tracy McGrady as the lead figure."

Still, panicked is not the verb that I would have used. Let’s be charitable and say that Pitino audibled.

According to Smith, Pitino offered the Bulls the third- and sixth-picks for Pippen, who wanted out of Chicago because he was unhappy with his contract.

Bulls general manager Jerry Krause, the Darth Vader of “The Last Dance,” was a willing and eager negotiator.

Krause did not need the top pick. Krause did not want Duncan. Krause wanted Tracy McGrady, the top high school player available in 1997. He could get McGrady with the third pick. (In fact, Toronto drafted McGrady at No. 9.)

According to Smith, Krause could add McGrady and another rookie with the sixth pick and then sign a veteran free agent.

With Jordan, Dennis Rodman, Steve Kerr, Ron Harper, Toni Kukoc and the rest of the Bulls’ championship nucleus still on the roster, Krause could rebuild the Bulls without tanking. That crew might have been good enough to win the 1998 title.

Smith wrote that Krause and Pitino were ready to do the deal.

Reinsdorf said that Jordan and Pippen had earned their opportunity to deliver another three-peat.

Smith wrote that the canceled trade annoyed Krause. It might have inspired him to make the vindictive move of not inviting Bulls coach Phil Jackson to his daughter’s wedding, behavior that signaled the Krause/Jackson could not survive more than another season. The end of the Bulls’ dynasty was near.

With the third pick, Pitino selected Chauncey Billups, a guard from Colorado.

With the sixth pick, he took Ron Mercer of Kentucky.

Mercer was, at best, an ordinary pro.

Billups won two NBA titles and played in five all-star games. None of that happened with the Celtics.

Pitino’s greatest weakness as a personnel guy was a lack of patience. He fell in and out of love with players with every dribble. Billups needed to be developed. Pitino could not wait. He traded Billups to Toronto for serial knucklehead Kenny Anderson after 51 games.

It was the first of string of bizarre personnel moves by Pitino that eventually led to his dismissal, with a 102-146 record after 3 1/2 seasons.

No longer bound to the Celtics, Pitino was unemployed for roughly 2 1/2 months, landing in Louisville as Denny Crum’s replacement.

So Jerry Reinsdorf, the guy known as The Chairman in Chicago, altered the course of the Bulls, the Celtics and the University of Louisville.