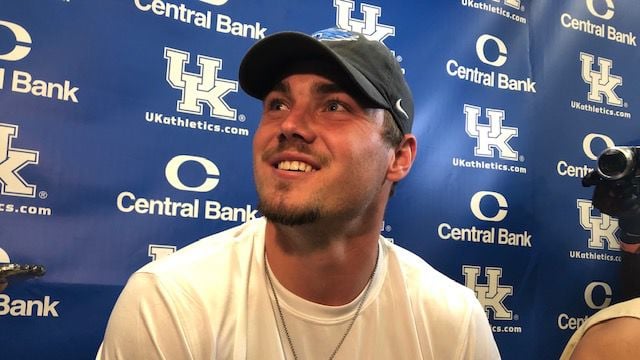 Sawyer Smith needs to improve his accuracy and cut back on his five interceptions. WDRB Photo/Rick Bozich 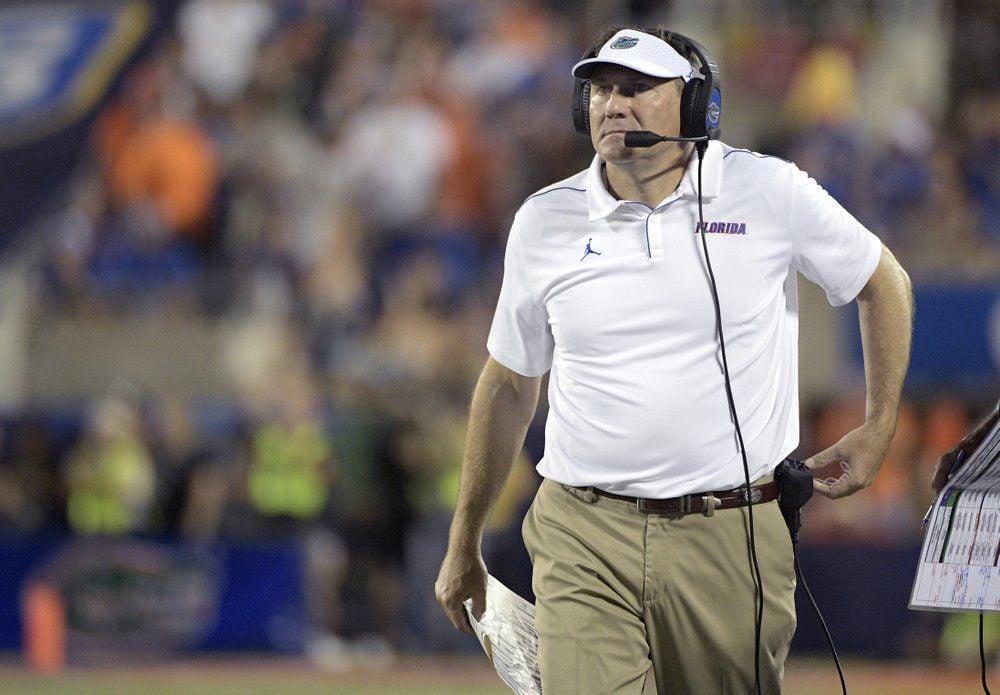 FILE - In this Aug. 24, 2019, file photo, Florida head coach Dan Mullen watches from the sideline during the second half of an NCAA college football game against Miami in Orlando, Fla. This is the time of year when the Southeastern Conference usually validates its claim as the best league in college football by dominating neutral-site nonconference matchups. The SEC is 21-6 in regular-season nonconference games against Power Five opponents at neutral sites since 2012. (AP Photo/Phelan M. Ebenhack, File)

LOUISVILLE, Ky. (WDRB) — Kentucky finished the 2018 season tied with Florida for second place in the East Division of the Southeastern Conference, but the Wildcats earned the tiebreaker by handling the Gators 27-16 in Gainesville.

Will the winner of the Kentucky-Florida game be the team most likely to chase Kirby Smart and Georgia for the top spot in the SEC East?

We’ll have our answers Saturday night at Kroger Field in Lexington.

4. Scouting Florida: The Gators ranked No. 8 in the Associated Press preseason poll, slipped to No. 11 after making three turnovers in a 24-20 win over Miami and then climbed back to No. 9 after handling Tennessee-Martin 45-0 in Gainesville last Saturday … this will be Florida’s first road game because the Miami game was played in Orlando … Florida has won six straight, and the Gators were the consensus pick to finish second to Georgia in the SEC East … Florida quarterback Feleipe Franks ranks second in the SEC in completion percentage at 77.8% but has thrown only four touchdown passes with two interceptions … Former Louisville defensive coordinator Todd Grantham runs the Gators’ defense for Mullen. His blitz-heavy style has the Gators ranking second in the SEC in total defense with an average of 247.5 yards per game allowed.

5. Scouting Kentucky: Like most SEC programs, the Wildcats have a strong recruiting connection in Florida with 19 players who played high school football in the Sunshine State. There are no Kentucky high school products on the Gators’ roster … the Wildcats rank ahead of Florida in multiple offensive categories, especially rushing offense. Kentucky averaged 207.5 yards rushing per game against Toledo and Eastern Michigan, while Florida averaged 140.5 against Miami and Tennessee-Martin … the Wildcats are also plus-one in turnover margin while the Gators are minus-2 … Kentucky has allowed 24 points or less in 15 of its last 16 games.

6. Spotlight Player: Sawyer Smith grew up in the Florida panhandle, playing for Tate High School in Cantonment, a suburb of Pensacola. He transferred to Kentucky from Troy to serve as Terry Wilson’s back-up, but Smith is positioned to be the UK starter the rest of the season after Wilson suffered a knee injury against Eastern Michigan … Smith led Troy to six wins in eight games after taking over under similar circumstances last season. During that stretch, Smith threw 12 TD passes with five picks and had three games with more than 280 yards passing … Wilson was excellent in Kentucky’s 27-16 win in Gainesville last season, completing 11 of 16 passes for 151 yards and two touchdowns. Wilson also ran for 105 yards and a score against the Gators.

7. Sideline storyline: Grantham is considered one of the best defensive coordinators in college football, which is why Mullen brought him along from Starkville to Gainesville. Grantham signed a three-year contract for $4.47 million and was scheduled to earn nearly $1.5 million this season. Then the Cincinnati Bengals tried to recruit Grantham back to the NFL, and word leaked from Florida that Grantham would be making closer to $1.8 million this season, making him one of the five highest paid defensive coordinators in college football. Of course, Grantham is known locally for the work he did during three solid seasons as Louisville’s defensive coordinator. From 2014-16, Grantham’s three defenses at U of L ranked sixth, 18th and 14th nationally in total defense. His departure to work for Mullen at Mississippi State after the 2016 started a major decline by the Louisville defense.

8. Fan Tip: The game is officially listed as a sellout … the SEC Nation TV show will telecast live on the SEC Network from 10 a.m. until noon in front of the William T. Young Library on campus. The crew will feature Marty Smith, Tim Tebow, Paul Finebaum and Marcus Spears … the first 200 fans at that show will receive free SEC Nation T-shirts. Free food and other gear will also be available … Kentucky will honor the six members of its newest Hall of Fame class, which features former quarterback Andre Woodson.