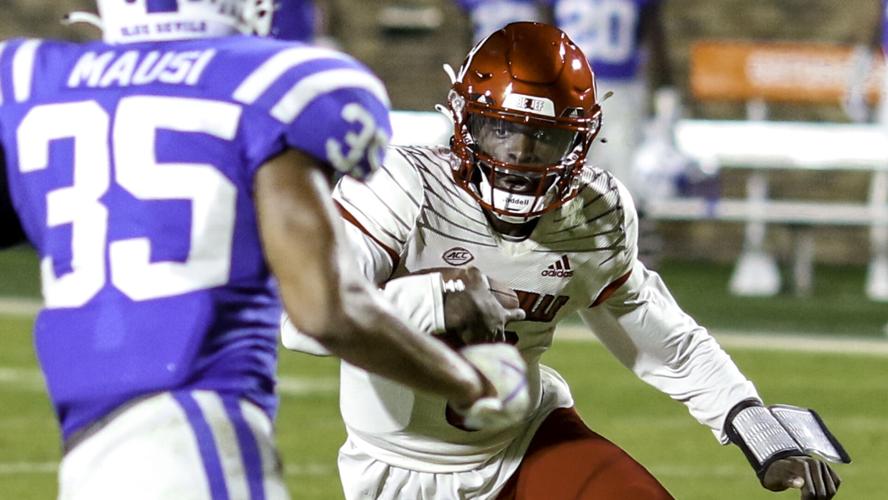 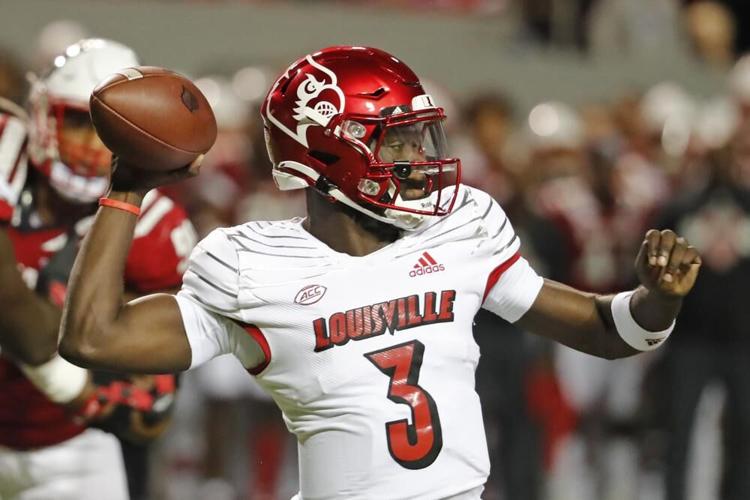 Louisville quarterback Malik Cunningham (3) throws the ball against North Carolina State during the first half of an NCAA college football game in Raleigh, N.C., Saturday, Oct. 30, 2021. (AP Photo/Karl B DeBlaker)

Louisville quarterback Malik Cunningham (3) throws the ball against North Carolina State during the first half of an NCAA college football game in Raleigh, N.C., Saturday, Oct. 30, 2021. (AP Photo/Karl B DeBlaker)

LOUISVILLE, Ky. (WDRB) -- The countdown to football at the University of Louisville has been cut to 23 days.

I’ve heard predictions of an eight-win season for Scott Satterfield’s team. ESPN’s football power index has the Cardinals closer to 6-6.

But with more than three weeks until kickoff, this is the perfect day to rank the dozen games on Louisville’s schedule in order of importance.

12. USF, Sept. 24 — The Bulls are in a serious funk. They recruited Jeff Scott from Dabo Swinney’s staff at Clemson, hoping Scott could pick up the pieces left by Charlie Strong. Not yet. USF is 3-18 under Scott. They were out-gained by 121 yards per game last season, losing eight games by 12 points or more. Not much reflected glory from winning this one.

11. James Madison Nov. 5 — The Cards won’t earn many credibility points by beating the Dukes but the fine print shows this team is better than USF. After making the FCS playoffs eight straight seasons, the Dukes have upgraded to the Sun Belt Conference. They played West Virginia tough in 2019 and North Carolina State tough in 2018 — and the Dukes will come to Cardinal Stadium following an off week. Satterfield knows what it means to a Sun Belt team to get a crack at a Power 5 opponent.

10. At Virginia Oct. 8 — The Cavaliers have won back to back games against the Cards, including last season when Virginia quarterback Brennan Armstrong threw for 487 yards. Armstrong is back but he’s playing for Tony Elliott, a first-year head coach who made his name directing the Clemson offense. And the Cavaliers are down a dozen starters.

9. At Boston College Oct. 1 — I rank this one more important than the Virginia game because the Eagles play in Louisville’s division. The Cards out-gained BC by 172 yards last season in a 28-14 win but have lost their last two trips to lovely Chestnut Hill, Mass. BC’s Jeff Hafley is supposed to be one of the game’s rising coaches.

8. At Clemson Nov. 12 — The Tigers start the season ranked No. 4 in the USA Today coaches poll. They’re still trying to understand how they lost the Atlantic Division title to Wake Forest last season. After years of stability, Swinney had to find new offensive and defensive coordinators. Quarterback D.J. Uiagalelei remains an enigma. There’s a lot going on at Clemson. But it’s a road game and the Cards have never won there. It would be the biggest win of the season but I can’t rank it high on the must win scale.

7. Pittsburgh, Oct. 22 — Some are picking the Panthers to repeat as Coastal Division champions even though quarterback Kenny Pickett is one of seven starters gone from Pitt’s 11-3 team. Coach Pat Narduzzi is counting on USC transfer Keon Slovis to replace Pickett but Slovis had 11 TD passes with eight interceptions last season. Definitely a swing game.

6. North Carolina State Nov. 10 — The Wolfpack have replaced Louisville as the team most likely to challenge Clemson in the Atlantic Division. They’re ranked in the Top 25 in the preseason magazines as well as the USA Today coaches poll (No. 13). Phil Steele ranks Wolfpack quarterback Devin Leary the second-best in the ACC. Hard to question a guy who had 35 TD passes and only five picks last season. Would be a statement win.

5. Wake Forest Oct. 29 — Anybody else forget the Demon Deacons averaged 41 points and won the Atlantic last season? I did. But the narrative around Wake changed this week as the game moved into the winnable category with the news that Wake quarterback Sam Hartman will miss an indefinite amount of time with a non-football related medical condition. Wake coach Dave Clawson said Hartman underwent a medical procedure and that he expected him to return this season. But until Hartman does return, it’s difficult to view Wake as a Top 20 team. Another game the Cards could get.

4. At Kentucky, Nov. 26 — Phil Steele ranks U of L (No. 33) ahead of UK (No. 35) but I have not seen the Cards ahead of the Wildcats in any other forecast — or on the scoreboard lately. Three straight Kentucky wins by a combined margin 153-44 make this a game Louisville needs to save an entire recruiting class from finishing their careers without beating the Wildcats. At minimum, the Cards have to avoid another blowout.

3. At Central Florida, Sept. 9 — Howard Schnellenberger beat UCF during his inaugural season at Louisville. Strong lost to UCF during his final season here. Satterfield needed a 66-yard return of a tipped interception with 13 seconds to play to beat UCF last season. Those three games were played in Louisville. This will be the Cards’ first trip to the Bounce House, where UCF has won 30 of its last 32. Steele says the Knights have the best running backs and receivers in the American Athletic Conference. If Ole Miss transfer John Rhys Plumlee comes through at quarterback, this game will require Louisville’s best. Need this week to create momentum for the following week.

2. At Syracuse Sept. 3 — The Cards have won 7 of 8 as well as well as 10 of the last 12 against the sagging Orange. Syracuse coach Dino Babers is a consensus candidate on the coaching Hot Seat lists. But the fine print shows that although Syracuse finished 5-7 last season, they lost back-to-back-to-back games by three points to Florida State, Clemson and Wake Forest. Sean Tucker led the Atlantic Coast Conference in rushing — and Steele named him a third-team preseason all-American. U of L is currently favored by 3 at VegasInsider.com, so this is hardly a putt in the leather.

1. Florida State Sept. 16 — First home game. ESPN national TV. A program that Louisville has beaten in back-to-back seasons as well as a program that has lost its last four road openers. If any team is likely to surprise Clemson or N.C. State at the top of the Atlantic Division, it’s the Cards or the Seminoles. Cards need this one to build buy-in from any skeptics in the fan base and hold their spot ahead of FSU in the ACC pecking order.

Louder Than Life wraps up four-day music festival in Louisville