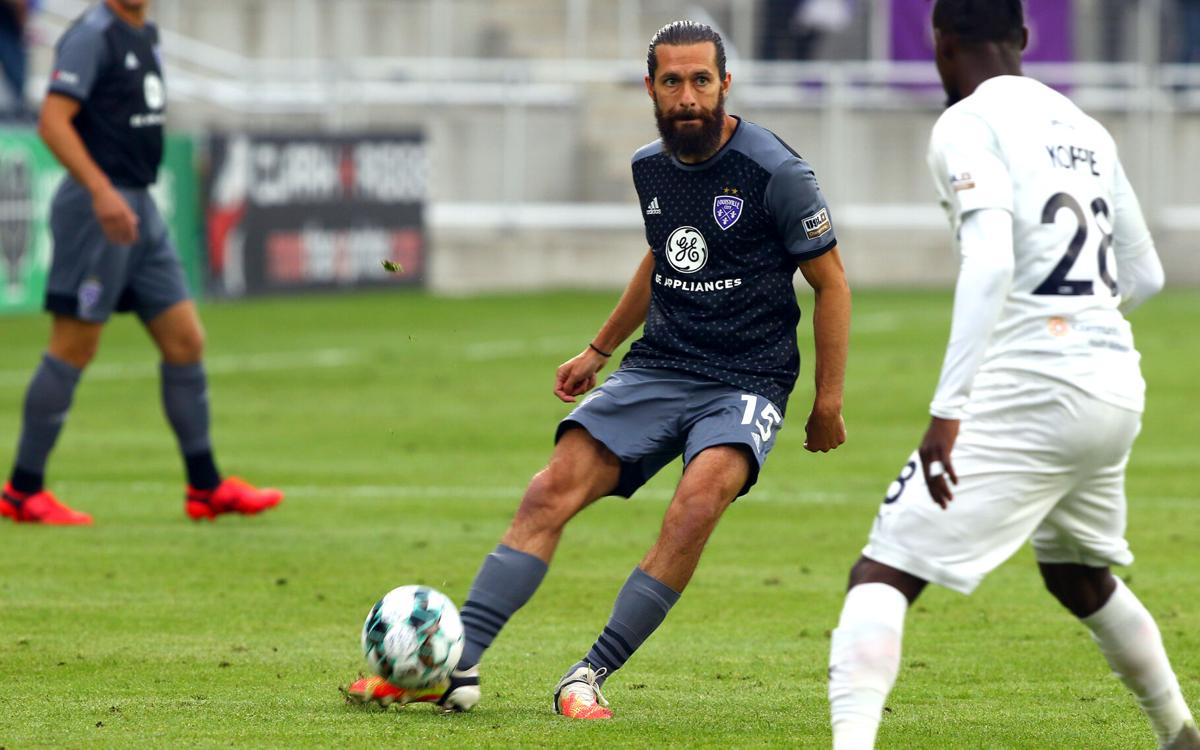 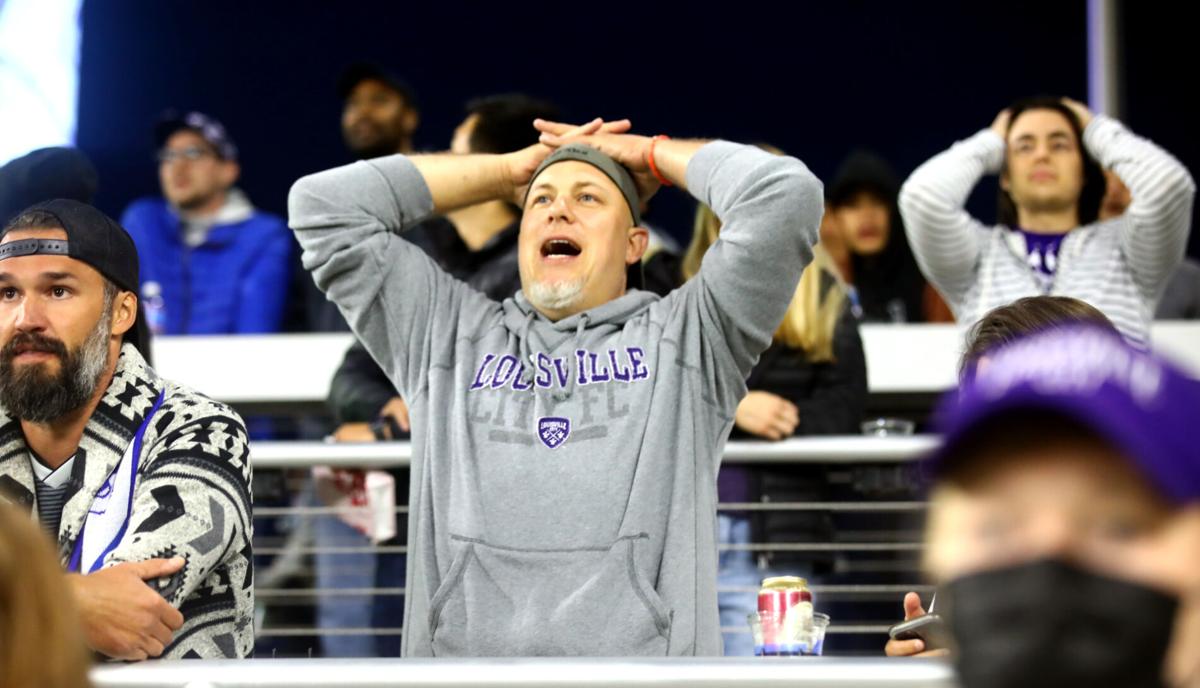 LouCity fans were in disbelief that the home team suffered its first loss this season on Saturday night. Courtesy EM Dash Photography 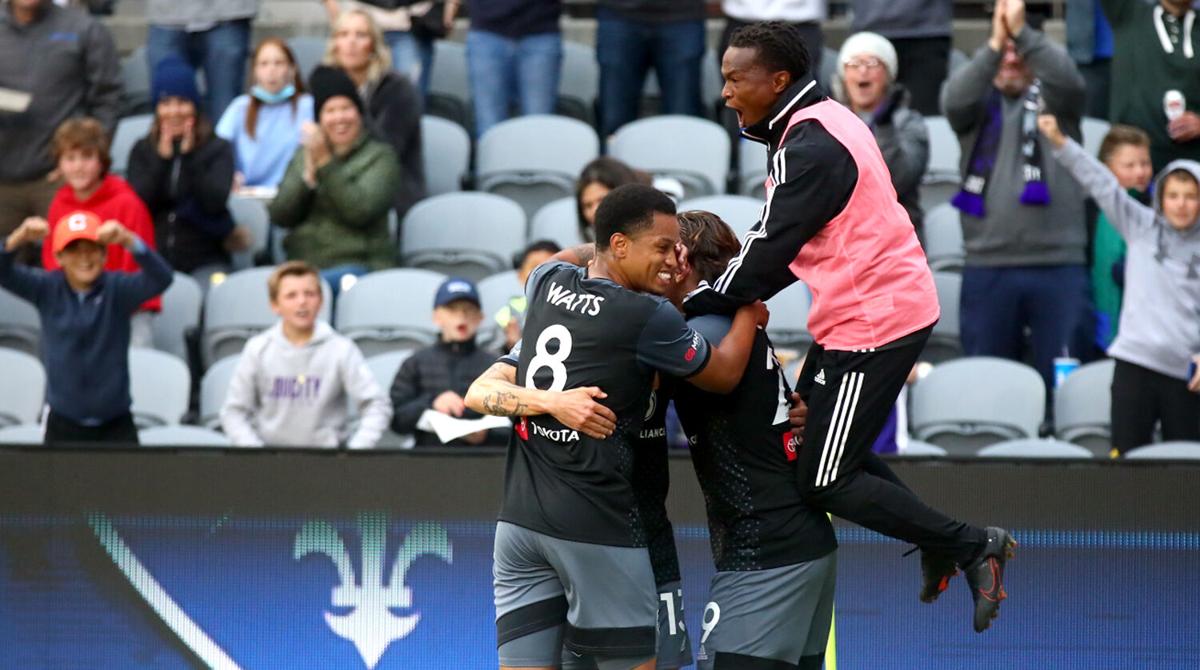 Lou City celebrated its only goal, by Corben Bone, in a 2-1 loss to the Indy Eleven Saturday night at Lynn Family Stadium. Courtesy EM Dash Photography

LouCity fans were in disbelief that the home team suffered its first loss this season on Saturday night. Courtesy EM Dash Photography

Lou City celebrated its only goal, by Corben Bone, in a 2-1 loss to the Indy Eleven Saturday night at Lynn Family Stadium. Courtesy EM Dash Photography

LOUISVILLE, Ky. (WDRB) -- For more than three years the rivalry between Louisville City FC and the Indy Eleven has been as one-sided as a conversation with the tax assessor.

This was not the way LouCity expected to have its 1,120-day stretch of dominance end. Not with a come-from-behind 2-1 Indy victory Saturday night at Lynn Family Stadium.

On a night when relaxed health and safety guidelines resulted in a record gathering of 10,731, a prelude to the inevitable future sellouts in the sparkling 15,304-seat venue.

On a night when Louisville City FC dominated the first 60 minutes, leading 1-0 without allowing Indy even a single shot on goal.

On a night when the home team outshot the visitors, 18-to-5.

On a night when Indy’s huffed and puffed to manage two shots on goal for the entire match. Both were penalty kicks by Indy’s Jordan Hamilton.

Both resulted in goals — the first in the 63rd minute and the decisive second one in the 88th minute that tagged LouCity with its first loss in four matches this season.

“Unhappy we couldn’t walk away with smiles for the thousands of people that were here,” LouCity coach Danny Cruz said.

“Obviously two plays it goes the other way and two penalty calls.”

For stretches, Indy played like a team that would have been happy to ride home with a 0-0 draw. For the first 44 minutes the visitors aligned five players in the back line, all within whispering distance of goalie Jordan Farr.

LouCity’s Niall McCabe flashed down the right side before crossing the ball off Cameron Lancaster. It quickly bounced to Corben Bone who drilled his first goal of the season.

Cruz said that at halftime he warned his players the same thing he had warned them all week: Beware Indy’s transition to quick counters from its defensive alignment.

“We had the ball, possessing it and we got rolled kind of,” said LouCity defender Pat McMahon. “We had possession, kind of lost the ball and just not in good position.”

The first penalty kick came after a foul on LouCity’s Sean Totsch. Hamilton stepped to his right but delivered a sizzling goal to the left side of the net.

The second miscue was more haunting. Louisville’s Alexis Souahy and George Davis IV miscommunicated and then misplayed a ball near midfield.

Indy’s Manuel Arteaga pounced on the prize as it rolled away, seeing nothing but open field ahead of him in the South end zone.

He raced toward the LouCity goal and was brought down by goalie Chris Hubbard inside the box.

Indy coach Martin Rennie directed Hamilton to take care of the penalty kick again — and Hamilton knew what to do, silencing the home crowd with his success.

“You can’t keep gifting goals like that and obviously come away short with zero points,” Cruz said. “Ultimately really frustrated at the moment.

“It can’t happen. Miscommunication. One thought the other was going to get it. Either way at this level with the expectation I have for this group, you can’t give that ball away.

“Ultimately two clear mistakes cost us two goals. I was really proud of how we played in the first half. Didn’t concede a shot. Really proud of the group. Created some good things.

“I said to them in there, ultimately you end up losing 2-1 so it doesn’t matter how beautiful the football was in the first half. It doesn’t matter than we created chances because we lost the game.”

Bone led LouCity with two shots on goal. Lancaster, Napo Matoso and Kyle Greig had the other three on the first the team was without Jonathan Gomez, who joined the Mexican National Team for several weeks of training.

LouCity (2-1-1) will play at Atlanta June 6 before returning for consecutive home matches against Memphis (June 12) and Birmingham (June 16). The Memphis match will be the official grand opening of the stadium and a night when a capacity crowd is expected.

“Honestly every single day I’m proud to be here. To hear what it sounded like tonight the feeling that I had on the first goal I’m probably never going to forget until we end up filling the place here not too long from now.”