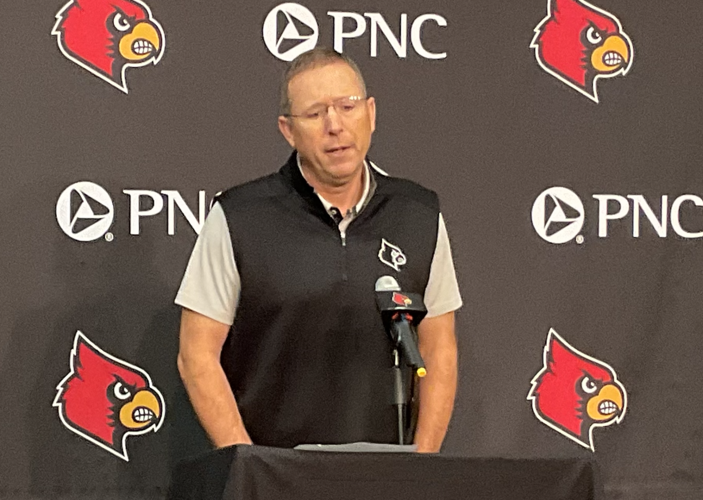 Scott Satterfield and Louisville are listed as a 7-point underdog for their game at Clemson Saturday. WDRB Photo Rick Bozich 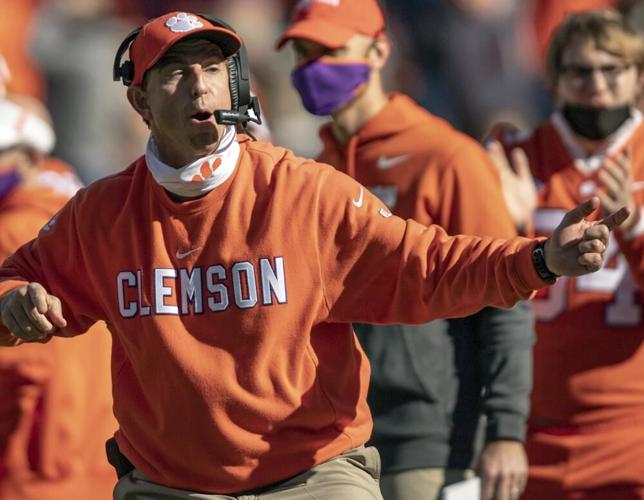 FILE - In this Oct. 31, 2020, file photo, Clemson head coach Dabo Swinney talks with players during the second half of an NCAA college football game against Boston College, Saturday, Oct. 31, 2020, in Clemson, S.C. Swinney, the coach of No. 3 Clemson, faces No. 5 Georgia in the season-opener in Charlotte, N.C. (Josh Morgan/Pool Photo via AP, File)

Scott Satterfield and Louisville are listed as a 7-point underdog for their game at Clemson Saturday. WDRB Photo Rick Bozich

LOUISVILLE, Ky. (WDRB) -- Have you been following the point spread for the Louisville-Clemson football game?

Because it is absolutely screaming that the wise guys believe something wild, improbable and never seen before could happen at Memorial Stadium in South Carolina on Saturday afternoon?

Six days ago, Clemson was favored by 13 1/2 points at DraftKings. Then Clemson rolled over and out for a three-touchdown loss at Notre Dame. Louisville backed up its victories over Virginia, Pittsburgh and Wake Forest by defeating James Madison.

The wise guys bet it down to 9, 8 1/2 , 8 and 7 1/2 — without another snap of the football and the news that U of L quarterback Malik Cunningham has an injury to his left (non-throwing) hand that is not expected to stop him from playing.

If you waited until Tuesday afternoon to bet the Cardinals, you only got seven points. Six weeks ago, nobody thought Scott Satterfield's team could take down Dabo Swinney and his army of five-star recruits. This week we're officially on Upset Alert.

A Louisville team (6-3) that lost to Boston College will only be a touchdown underdog against a Clemson team (8-1) packed that was headed for the college football playoff until the Tigers embarrassed themselves at Notre Dame.

"I think we're certainly playing with a lot more confidence as a football team overall compared to a month ago," Satterfield said.

"We were inconsistent early on playing. I think we've just kind of — over the last four games — really found some consistency. That's been the biggest key. ...

"We know we're going to play a really good team in a hostile environment and all that. We've got to do what we've been doing the last four games and not worry about who we're playing and try to elevate our game a little bit more and just try to continue to get better."

Louisville has played Clemson seven times. Louisville has lost seven times by an average of 20.4 points. The Tigers have won 38 consecutive home games. Clemson has already secured its position as the champions of Atlantic Division of the Atlantic Coast Conference.

Clemson beat Boston College by 28. U of L lost to BC by one — Advantage Clemson.

Clemson beat Florida State by six. U of L lost to the Seminoles by four — Advantage Clemson.

Clemson beat Syracuse by six. U of L lost to the Orange by 24.

I'm not Kirk Herbstreit or Urban Meyer, but that appears to indicate advantage Clemson.

But ... U of L has played its best football the last three weeks. Clemson's last two wins were by a touchdown and the Tigers flopped at Notre Dame.

Louisville's defensive improvement has transformed the Cardinals into third in the ACC in points allowed. The Cards are giving up 343 yards per game, just nine more than Clemson.

After the Tigers managed 281 yards against Notre Dame, people starting asking the question they have asked about the Tigers' offense all season:

Is it time for Swinney to make a switch at quarterback and replace D.J. Uiagalelei with five-star freshman Cade Klubnik, who has completed only 45% of his passes with one touchdown and one interception in limited playing time?

That's a question that fans ask when a program that has made a habit of making college football playoff looks as if it will not make the College Football Playoff.

"Obviously, to beat a team so recognizable like Clemson that's won national championships, that has won 38 straight at home, certainly your future would look pretty good," Satterfield said.

"It impacts recruits. It impacts the future that way, which is huge obviously. And it would also just prove that we're headed in the right direction.

"We're not there yet but we want to continue to get better and better as a football team. This would be another step in that direction."