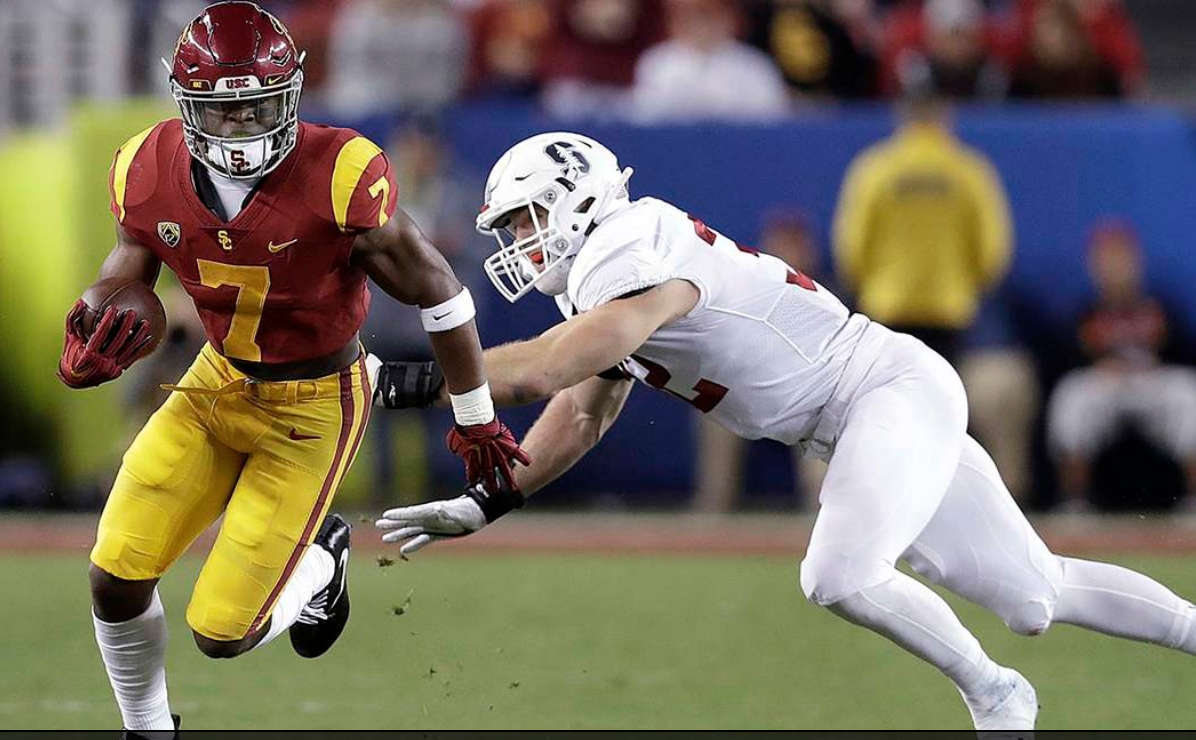 Tailback Stephen Carr (7) was a 5-star recruit at USC who decided to play his final season for Indiana in 2021.  AP Photo Marcio Jose Sanchez. 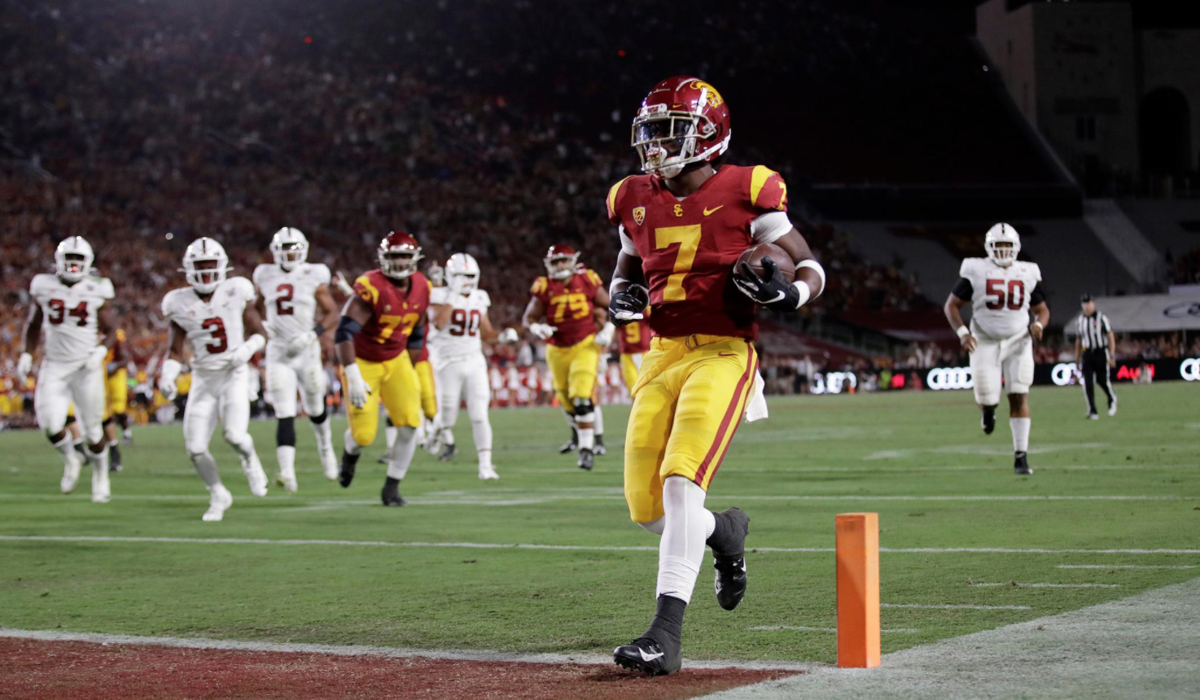 Tailback Stephen Carr (7) was a 5-star recruit at USC who decided to play his final season for Indiana in 2021.  AP Photo Marcio Jose Sanchez.

LOUISVILLE, Ky. (WDRB) -- The “transfer portal” is a term we’ve heard 1.7 million times since the NCAA decided players can jump to a new program without sitting out a season.

Keep an eye on Indiana football. The Hoosiers look like a clear test case for what the transfer portal can do to quickly strengthen a team. As many as nine transfers jumped into Tom Allen’s improving program as the No. 17 Hoosiers try to upgrade from last season’s 6-2 performance. The journey will begin with a visit to No. 18 Iowa on Sept. 4.

“I think we’re going to win a lot of games this year,” said Stephen Carr, who transferred from Southern California to play tailback.

Several IU transfers have brand-name pedigrees: wide receivers from Florida State and Texas A&M, an offensive lineman from Michigan and a defensive linemen from Auburn and Ole Miss.

None can match the pedigree of Carr, the guy likely to be Indiana’s lead tailback.

If you’re making a list of the glamour positions in college football, it’s Notre Dame quarterback, Alabama anything and USC tailback.

Carr is a California kid who committed to the Trojans knowing that five USC tailbacks won the Heisman Trophy. He was a five-star talent, the top-ranked player in USC’s 2017 recruiting class, which was ranked No. 4 in the nation. Carr said “No,” to Alabama, Georgia, LSU, Notre Dame and Oregon to stay closer to his mother in Fontana, California, an hour West of the USC campus.

In four seasons in Los Angeles, Carr was good but not great. He averaged 5 yards per carry over four seasons. Pass-catching was not an issue. Carr averaged 14 receptions per season.

Carr never earned enough carries to generate as many as 400 yards in a season and departed with one career 100-yard rushing game, which he posted against Stanford in the second game of his freshman season. Back, ankle, foot and hamstring issues forced him to miss 10 games over four seasons.

Back to that 5-yards-per-carry average. Indiana’s overall running game has not averaged 5 yards per carry since 2014, Tevin Coleman’s farewell season in Bloomington.

Even as the Hoosiers won in 2020, they had to overcome a mediocre running game that averaged 3.1 yards per attempt, next to last in the Big Ten.

If Carr can average 5 yards per carry in Bloomington, it will change the way teams defend quarterback Michael Penix Jr. and the IU offense.

Reports from IU’s fall camp have been that Carr and sophomore Tim Baldwin look the part of productive Big Ten backs. At 6 feet 1 inch tall and 215 pounds, Carr looks the part.

“His strengths are that he’s very explosive,” IU running backs coach Deland McCullough said. “His change of direction is high-end. He has the ability to make people miss. He runs with power. He runs with decisiveness ...

“... His pass protection is where I want it to be also. Obviously he has very good hands. We’ll be able to see those on display.

“The things for him to continue to work on are all the finer points of our offense ... but when the ball is snapped, he’s going to know what he’s doing and operate on a high level, and we’re all excited about that.”

McCullough is an essential piece of this story. He helped recruit Carr to USC. McCullough coached him as a freshman, which was Carr’s best season, before he jumped to the Kansas City Chiefs for three years.

In February, McCullough returned to IU, where he coached from 2011-16. Carr followed in May. That was a jarring development for USC because he had a “tremendous” spring camp, according to one USC website.

Remember this: Coleman, Jordan Howard and Devine Redding all excelled under McCullough during his first run at IU.

Carr has the ability to produce more than he produced at USC. Although he had never before left the Los Angeles area, Carr said that his mother encouraged him to change directions in his career.

In an interview session Thursday, Carr was direct in his goals: Win football games and get to the National Football League.

“It was a very tough decision, leaving one of my dream schools and leaving so much of my family behind and leaving so many friends behind,” Carr said. “But I think it was what I needed to take a further step in my life.”

Carr exchanged the pressure of being the next Reggie Bush or Marcus Allen for the job of being the guy who can help Indiana run the ball with gusto.

“There’s always going to be pressure whenever you step on the field wherever you go,” Carr said. “You want to be at your best when it counts the most.

“There’s always pressure, but it just all depends on how you prepare for that pressure. You can’t let that moment get to you.

“Pressure makes diamonds at the end of the day. You’ve got to love being in pressure situations. You’re either going to thrive or you’re going to fall. I love those type of situations.”

Against the Grain opening 'The Whirling Tiger' bar, event venue in Butchertown next week

Louisville's first and only Honor Flight of 2021 takes off for Washington, D.C.