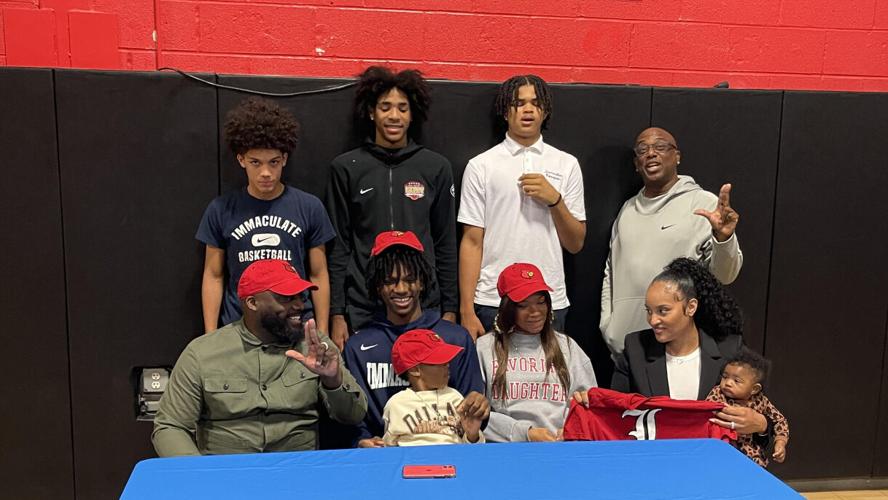 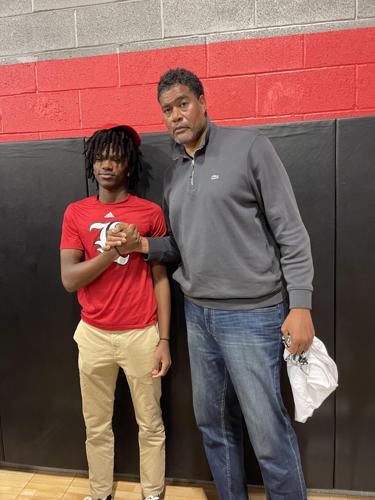 T.J. Robinson and Pervis Ellison after Robinson's commitment to Louisville. 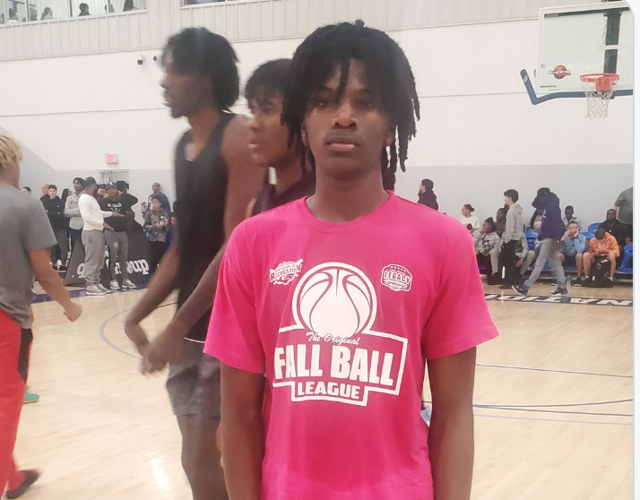 T.J. Robinson, a junior point guard from New Jersey, said he planned to play basketball for the University of Louisville on Monday. Photo NJ Hoops/Rivals

LOUISVILLE, Ky. (WDRB) -- One day after the gaps in the University of Louisville men’s basketball team backcourt were exposed in an exhibition game defeat to Lenoir-Rhyne, the Cards moved to fix that problem — for the 2023-24 season.

According to the 247Sports composite recruiting index, Robinson is ranked the No. 87 overall prospect in the 2024 class.

Last summer Robinson played for the 16-and-under New Jersey Scholars AAU team. That program is directed by former University of Louisville star Pervis Ellison, a teammate of U of L coach Kenny Payne on the Cards' 1986 NCAA title team.

"T.J. is an elite athlete who can really score," said Ellison, who attended Robinson's commitment ceremony Monday. "I don't care where he is ranked, he is definitely one of the Top 25 athletes in his class. He is super quick and he wants to score.

"He's going to move up the rankings when he's out there more on the bigger stage. He can shoot it and he can definitely beat you off the bounce. You can't stay in front of him."

A left-hander, Robinson started his prep career in New Jersey at Patterson Teaneck High, averaging 17.1 points as a freshman. He is listed as 6 feet, 4 inches tall and 170 pounds.

Robinson reportedly impressed the U of L coaching staff during several Nike EYBL events last spring and visited for the Louisville Live event at Slugger Field on Oct. 21.

In a 2021 interview with Jamie Shaw of Rivals.com, Robinson said that he has tried to pattern his play in the style of New York/New Jersey point guards.

"I feel like I bring a tenacity to the floor," Robinson told Shaw. "I can defend, score, rebound, set up my teammates, pretty much anything.

"I try to be able to do anything needed of me on the floor. Some people say I play like Kenny Anderson or Brandon Jennings (left-handed point guards from New York who made the NBA)."

Robinson is the Cards' first commit in the 2024 class. Payne has two players pledged to join his program next season: forwards Kaleb Glenn and Curtis Williams Jr.

Glenn, a three-year star at Male High School in Louisville, will play his senior season at La Lumiere High, a prep school in LaPorte, Indiana. Williams plays for Brother Rice High School in Bloomfield, Michigan, a suburb of Detroit.

Another name to follow in the Class of 2024 is Billy Richmond, a 6-7 forward who will play for Camden (N.J.) High School, That is the same school as point guard D.J. Wagner, a top guard in the Class of 2023 class who is expected to commit to Kentucky.