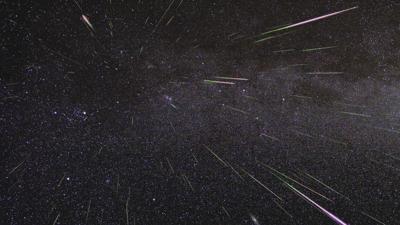 Look up into the northern sky tonight for a chance to see an active meteor shower. The Draconids are active right now; technically the shower peaked yesterday, but activity is still expected tonight. Here's the catch: Draconid is not usually a very big event. Only a few meteors per hour are likely this year, so head outside tonight after the sun sets for a chance to see them. Get away from all light sources and give your eyes time to adjust to the darkness. This shower is best viewed just after the sun sets when the radiant point is highest in the sky. If you can find the Big Dipper in the night sky, look just a bit above that to find the radiant point for the Draconids. The new moon happened on Wednesday, October 6, so we still don't have much moonlight to get in the way of trying to see a shooting star tonight.

The Orionid meteor shower is also active right now. This shower peaks later this month, but that peak happens at the same time as our next full moon. The full moon adds more light to the night sky making it harder to see shooting stars. This is another shower that isn't expected to produce huge quantities of shooting stars this year, and this one will be best viewed in the hours between midnight and dawn. Orionid meteors are usually characterized as being slow-moving and faint, but with trains of light behind them that can last for a few seconds. Look toward the east for this one.

The north Taurid meteor shower becomes active toward the end of this month and stays active through early December. That's also not a shower that has a lot of shooting stars falling all at once, but some of the meteors could be fireballs. Those are the really bright shooting stars you most often see on dash cam video or home security video. The Taurids are also best seen before dawn, but you may want to wait to look for these until early November at our next new moon.

Why are there so many active meteor showers right now?

We see shooting stars when the earth passes through a debris field left over by a comet. Think of it this way: the comet is a toddler and the space debris left over are the crumbs the toddler leaves everywhere. The Earth passes through that debris-field just like you might walk through the crumbs on the floor. When the dust, rock, and ice pieces in that debris field enter Earth's atmosphere, they will burn up. That's what we call a shooting star - burning space debris. In the next month or two, the Earth's orbit takes it through the orbital path (debris field) of a few different comets which is why we have a few different showers happening around the same time.