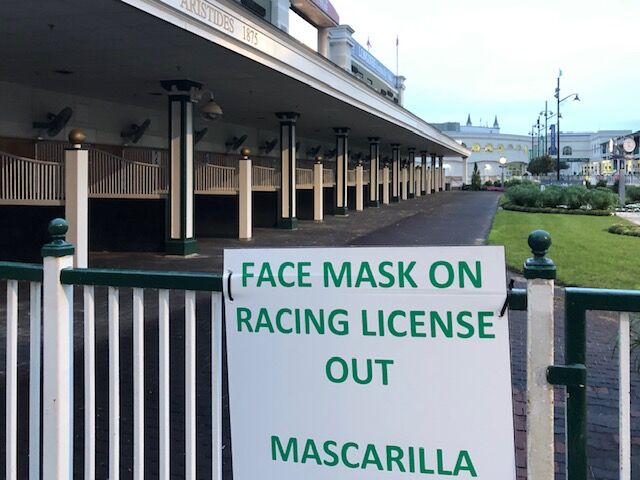 Facemasks are required of everybody who enters the paddock at Churchill Downs. Rick Bozich photo 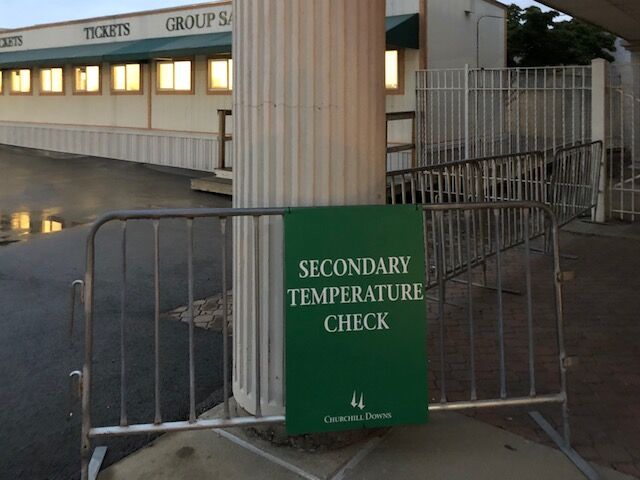 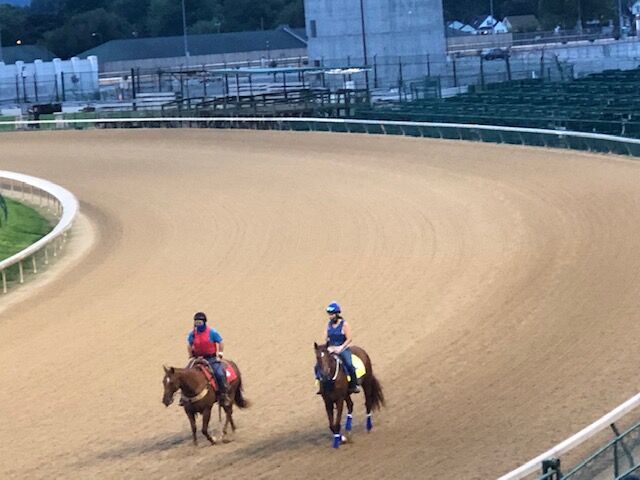 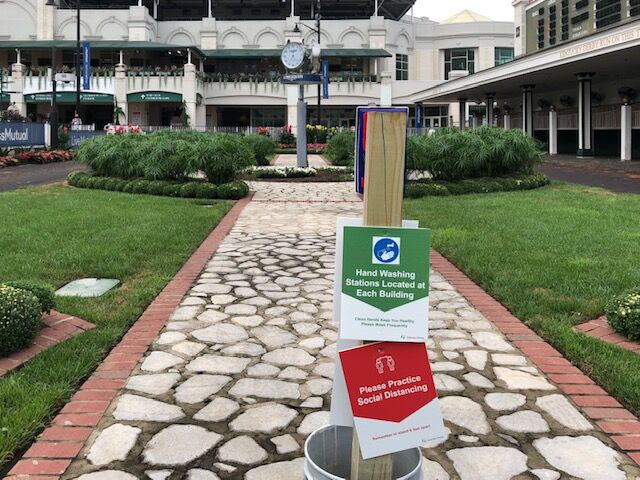 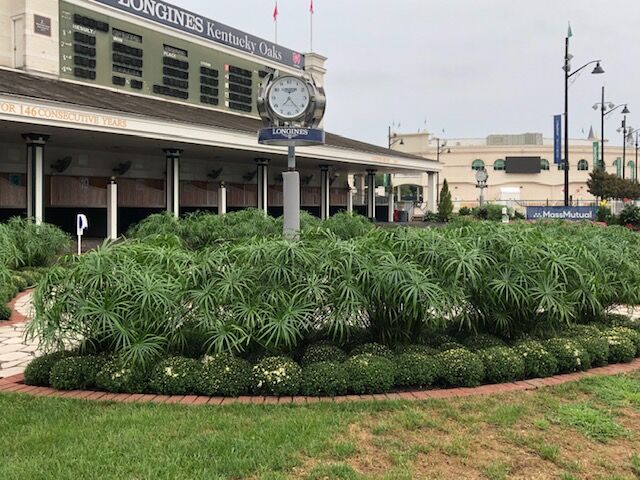 Tulips have been replaced by mums and other shrubbery in the Churchill Downs paddock. Rick Bozich photo 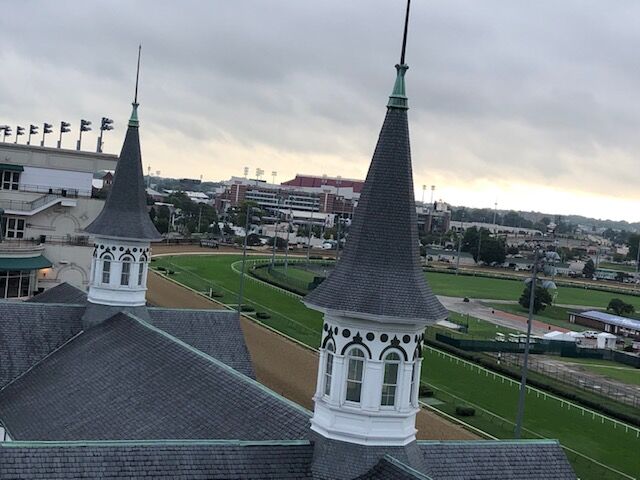 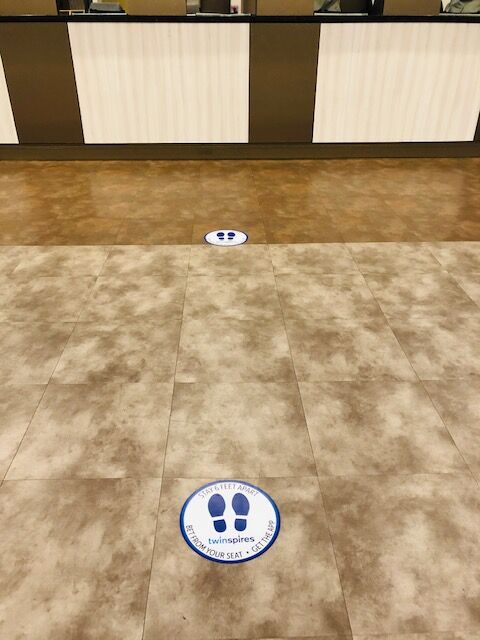 Facemasks are required of everybody who enters the paddock at Churchill Downs. Rick Bozich photo

Tulips have been replaced by mums and other shrubbery in the Churchill Downs paddock. Rick Bozich photo

LOUISVILLE, Ky. (WDRB) — The “FACEMASK ON, RACING LICENSE OUT,” signs protect the gates that lead into the locked paddock at Churchill Downs.

Inside the paddock, three hand sanitizer stations are arranged around the ornate Longines clock — with the requisite reminders to remain socially distanced.

The red tulips that bloomed so forcefully in early May have been replaced a collection of yellow mums still waiting to explode in color.

Stickers requesting 6 feet of separation have been placed on the ground outside every betting window. Even the fancier elevators typically reserved to whisk celebrities to the Turf Club or higher levels of exclusivity carry warnings:

Make no mistake: Kentucky Derby Week opened at the track Monday morning. This will not be the festival of bantering, betting and beverages that has been a community trademark for generations.

Odds are it will be a six-day held breath. Concerns about the novel coronavirus pushed the Derby back 18 weeks on the racing schedule, making it the second leg of the Triple Crown, not the first.  The virus stirred concerns about bringing more than essential personnel to the track as COVID-19 cases surged in Kentucky.

But in 2020 there is always more to the story. Barclay Tagg is the trainer of Tiz the Law, the unquestioned Derby favorite. Tagg is 82, by definition a member of an at-risk group for the virus.

On Friday, during a national teleconference to discuss the Derby, Tagg said he was “very concerned,” about the prospect of protests and conflict outside the track.

The possibility of protests for social justice in memory of the death of Breonna Taylor undoubtedly contributed to the recent decision by the track to reduce the crowd for Saturday’s race from 23,000 to 0 — other than owners, trainers, jockey, media, security and necessary track personnel.

“I couldn’t be anything else but very, very concerned,” said Tagg, who is scheduled to take Tiz the Law to the track Tuesday morning before post positions for what is expected to be a 18-horse field are drawn.

That is where we are with Kentucky Derby 146. It will arrive 18 weeks late with an extra serving of anxiety.

Tiz the Law has all the credentials of being a legitimately special horse. When the morning-line odds are set late Tuesday morning, the colt is expected to be 6-to-5 favorite, perhaps the shortest price since Arazi in 1992.

Because of the shuffled racing schedule, Tiz the Law arrives with the unusual credentials of four consecutive stakes victories, including three Grade I wins — the Florida Derby, the Belmont and the Travers.

The last two races were supposed to be contested after the Derby, but when COVID-19 raged in the spring, the Belmont became the first Triple Crown race. It will be followed by the Derby and finally the Preakness in Baltimore next month.

Tiz the Law dusted nine challengers to win the Belmont by nearly four lengths June 20 and then moved to Saratoga, where the colt won the Travers by 5 1/2 lengths last Aug. 8.

He certainly looks the part of a great horse as well as a wonderful story.

Tiz the Law was purchased for $110,000 by a collection of New Yorkers, the folks from Sackatoga Stable. It’s a joyous syndicate of horse lovers, who love to roll into the track in a school bus, as they did when Funny Cide won the Derby and Preakness in 2003.

Tagg is the generally taciturn trainer, who will be 5 years older than 77-year-old Art Sherman was in 2014 when Sherman became the oldest man to train the Derby winner with California Chrome.

Don’t forget Manny Franco, the forgettable jockey. The wise-guys wanted Tagg to replace Franco for a more established jockey even before they realized Franco finished 17th and 18th in his only two Derby rides.

Great stories, all of them.

But this week they are footnotes. The story will be how Churchill Downs and the city handle the virus and the predicted protests.

On Monday the track was generally quiet. When a handful of Derby horses moved onto the track at 7:30 am. there were fewer than 25 observers in the mammoth Churchill Downs grandstand. It had all the look of the last week in August instead of the first week in May.

On Tuesday a field of likely 18 horses will be drawn with the odds tilted toward Tiz the Law.

The held breath will continue the rest of the week. Horse racing, Churchill Downs and Louisville will work to get through Saturday as safely as possible.

HOW TO WATCH: Kentucky chases statement win at No. 8 Auburn

Against the Spread, Week 3: The SEC joins the fun