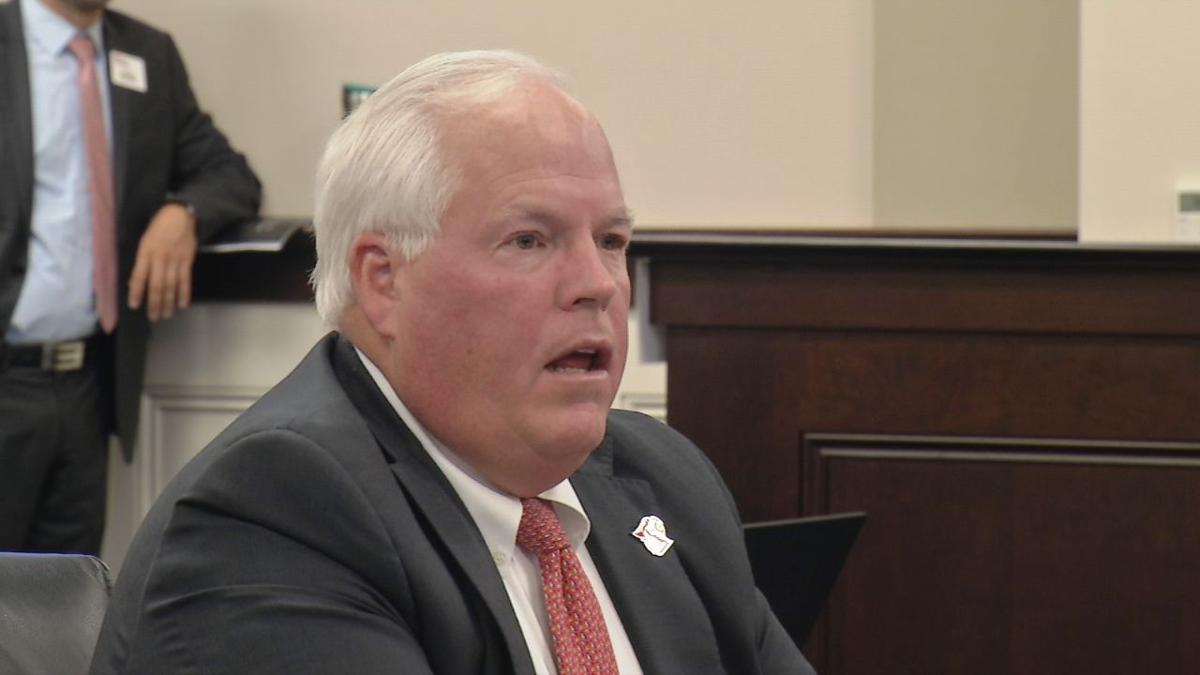 Tom Miller, CEO of University of Louisville Health, testifies during a legislative hearing in Frankfort, Ky. on Sept. 9, 2019. 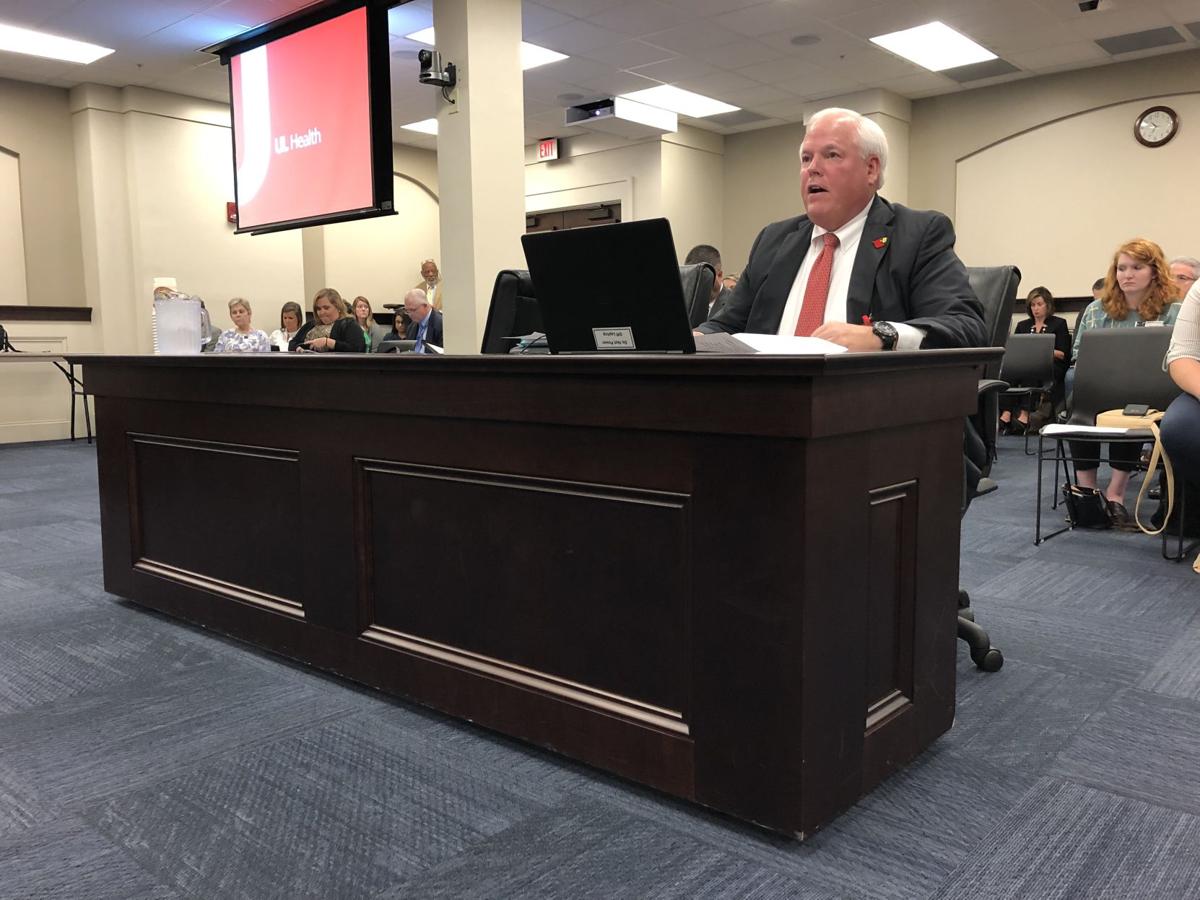 Tom Miller, CEO of University of Louisville Health, testifies during a legislative hearing in Frankfort, Ky. on Sept. 9, 2019.

LOUISVILLE, Ky. (WDRB) –  University of Louisville officials have said for months that the university can’t afford to take on money-losing Jewish Hospital and KentuckyOne Health’s other Louisville properties without the help of someone else’s checkbook.

As rumors of Jewish Hospital’s imminent closure swirled last month, state government came to the rescue: Gov. Matt Bevin and legislative leaders said they would shepherd a $50 million infusion of state money to U of L to help fund the KentuckyOne Health bid.

When the deal was announced Aug. 14, U of L President Neeli Bendapudi called that support “vital” and said there was “zero chance” the university would have agreed to take on the KentuckyOne Health properties without outside funding – primarily, the promise of $50 million from the state, which still must be approved by the legislature.

But in a private meeting in late August that was secretly taped, U of L Health CEO Tom Miller told a group of KentuckyOne Health physicians that the university can in fact “be successful” with the takeover even without the $50 million from state government.

“Whether it happens or not, we have a plan associated with that on how to be successful,” Miller told the group of physicians at the meeting in late August, according to an audio recording reviewed by WDRB News. “It’s great to have that as a backup; it’s just a great resource to have.”

Seeming to bolster the case that the $50 million will come through nonetheless, Miller said during the private meeting that Bevin “believes that this was his idea, not our idea.”

Bevin, who is running for reelection in November, has been an unequivocal supporter of the loan, which is couched as an economic development measure to preserve about 5,000 healthcare jobs in the Louisville area. A Bevin spokeswoman did not respond to a request for comment.

A U of L spokesman said Miller’s remarks during the private meeting are not at odds with previous statements by him and other top U of L officials about the necessity of the $50 million.

“U of L Health has been involved in extensive contingency planning related to the expansion of its medical facilities and operations,” Miller said in a written statement for this story, which did not directly address his comments during the private meeting. “We are exploring several scenarios that would position us for success as we integrate the KentuckyOne Health assets into our system. The $50 million loan from the state … is critical and gives us the best opportunity to make Jewish Hospital and the other assets sustainable.”

U of L moving forward with or without state money

It’s no surprise that U of L isn’t absolutely banking on the state money as it plans to absorb the KentuckyOne properties. That’s because U of L has already agreed to the purchase regardless of whether lawmakers follow through on the $50 million.

The university is set to take ownership of the KentuckyOne assets -- which include not only Jewish Hospital, but three other hospitals, four outpatient centers and a physician practice group -- on Nov. 1. Lawmakers can’t approve the loan until they convene for the 2020 legislative session in early January.

In addition to Bevin, the leaders of the state House and Senate are on board with the $50 million plan, and House Speaker David Osborne, R-Prospect, has said he’s “quite confident” it will quickly pass his chamber. But others have expressed skepticism.

“Are we picking winners and losers when we are participating in these kind of efforts?” he said. “…Why should we spend $50 million for Jewish (Hospital) when we are not going to do anything for Pineville Community (Hospital)?”

At the hearing Monday, lawmakers pressed Miller on what would happen if they don’t approve the $50 million loan, half of which U of L would not have to repay if the university meets certain conditions.

“We will do everything that we can (but) we cannot do the things that we thought we’d have to do,” Miller said during the hearing.

U of L projects the KentuckyOne facilities, particularly Jewish, need more than $100 million in facility upgrades, for example. If the state loan isn’t approved, Miller said told lawmakers, “We wouldn’t be able to meet those needs at all. We wouldn’t have the resources associated with that.”

Miller told reporters a few minutes later that it would be “very difficult” for U of L without the $50 million.

Miller was also asked during the private meeting with physicians how U of L would manage if the $50 million doesn’t come through.

During that meeting, he touted his “$92 million integration plan” to merge the U of L and KentuckyOne operations, saving money and increasing revenue. He did not mention cutting back on capital expenses.

The physician questioner at the private meeting then continued, “At our last meeting you outlined how the University of Louisville could do this without anybody.” Miller replied: “Correct.”

Jill Scoggins, the top communications official for U of L’s Health Sciences Campus, said it was “unfortunate” that the meeting with the KentuckyOne doctors, in which Miller and other officials sought to address their concerns, was leaked to the press.

“It is not the way we would have wanted to start the relationship,” she said.

Louisville Business First on Friday reported on other details of the meeting.

As a group, the KentuckyOne properties are losing about $43 million a year, according to figures presented by U of L in multiple presentations leading up to the deal.

That’s why the transaction actually involves KentuckyOne’s parent company paying U of L a net a $126 million from various sources over four years to assume responsibility for the healthcare operations.

The $50 million from the state is not the only external support U of L has garnered; the Louisville-based Jewish Heritage Fund for Excellence has also pledged $10 million to help fund the takeover.

Jewish Hospital and several other healthcare properties around Louisville are about to get new names as the University of Louisville takes over KentuckyOne Health’s local assets, which is set to close on Friday.

Bendapudi: U of L 'really, really needs' $50 million from state as it swallows KentuckyOne Health

The University of Louisville’s academic medical center doubled in size today with the KentuckyOne deal. Now U of L "desperately needs" lawmakers to approve a $50 million infusion of state money to make the takeover work, the university's president says.