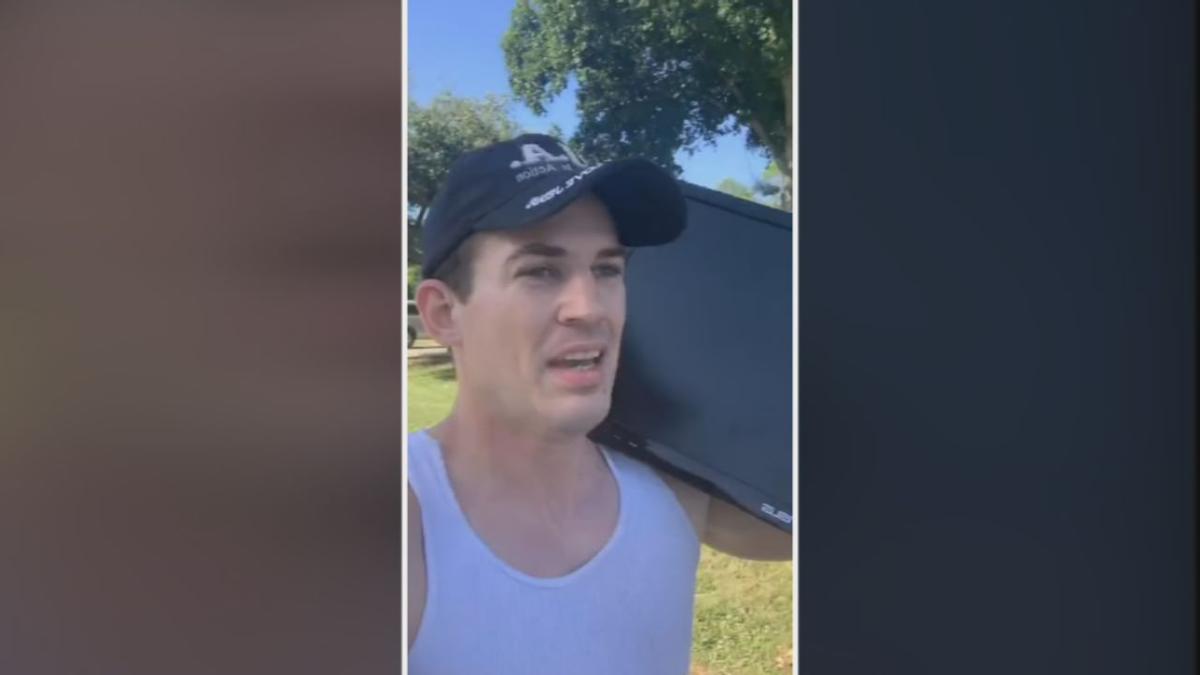 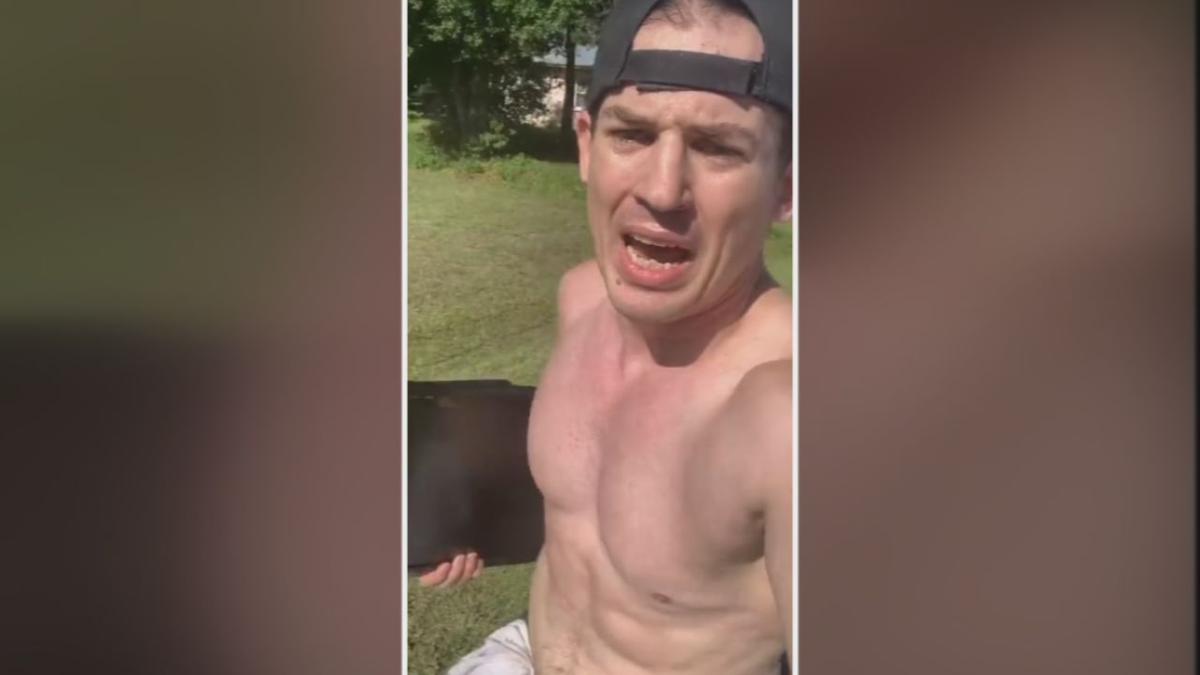 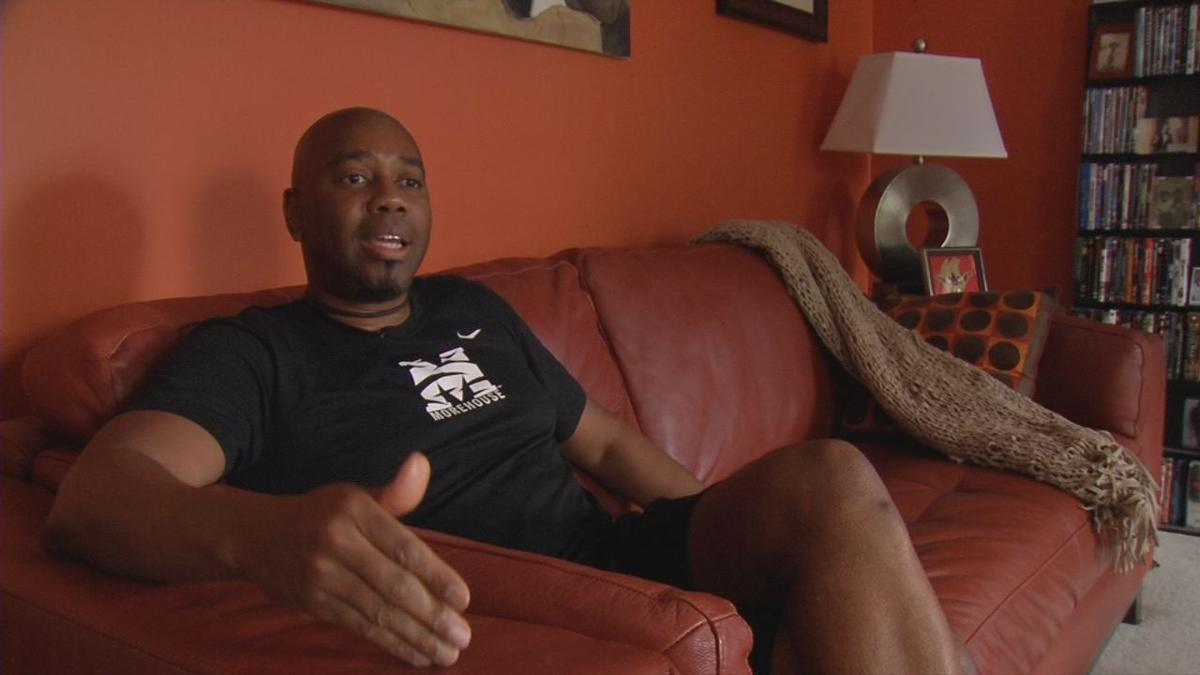 Dr. Ricky Jones, a professor of Pan African Studies at the University of Louisville 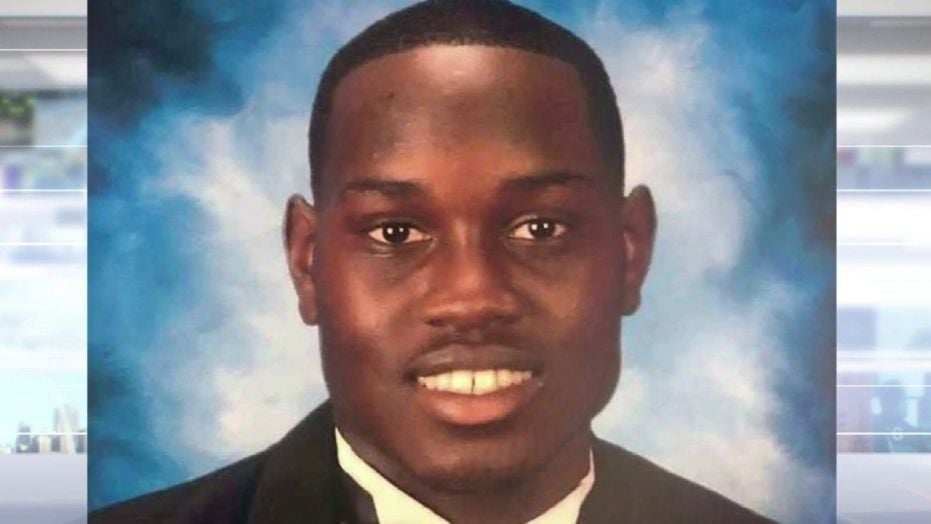 Ahmaud Arbery, 25, was killed on a residential street just outside the port city of Brunswick. (Courtesy of Fox News)

Dr. Ricky Jones, a professor of Pan African Studies at the University of Louisville

Ahmaud Arbery, 25, was killed on a residential street just outside the port city of Brunswick. (Courtesy of Fox News)

LOUISVILLE, Ky. (WDRB) — A white former pastor hopes running while carrying a flat-screen television will help raise awareness about social justice issues across the country and here in Louisville.

"I still consider myself a conservative, although I definitely am an independent," said Richard Demsick, from Vero Beach, Florida. "I removed my registration from the Republican party earlier this year."

Demsick joined people across the country who went on runs in honor of Ahmad Arbery, a 25-year-old Georgia man who was shot and killed while jogging in February. Gregory and Travis McMichael, the father and son charged with killing Arbery, told police they thought he looking suspicious, matching the appearance of a burglary suspect who they said had been recorded on a surveillance camera some time before, according to an Associated Press report. Arbery’s mother, Wanda Cooper Jones, has said she thinks her son, a former high school football player, was just jogging in the neighborhood before he was killed.

Demsick heard about case through a friend and wanted to do something.

##runwithmaud ##irunwithmaud ##runwithahmaud happy birthday Ahmaud. Sad to me I ran today with no fear in a similar neighborhood carrying a TV

"I was on Instagram, and a friend of mine posted, 'I run with Ahmaud.' I had no idea who Ahmaud Arbery was," he said. "I started to look it up. I watched the video; I read some articles, and my heart just sank."

Recently, Demsick joined people across the country to celebrate what would have been Arbery's 26th birthday. Instead of a celebration, people mourned Arbery by jogging 2.23 miles, symbolic of the date Arbery was killed.

"I immediately knew that I wanted to run with Ahmaud," he said. "I decided to figure out a way to do that in a way that might shine some light, as a white person, on the privilege that I know that I have and live with."

So, halfway through his run, Demsick took off his shirt and turned his baseball hat to the back. He was also carrying a flat screen television.

During the 2-mile run, Demsick got the answer he expected.

"No one called the police," he said, "and I knew they wouldn't. The only response I got was people waving and smiling at me. It didn't seem like anyone thought I was a thief and stole the TV."

##irunwithmaud part two! Really thought I figured it out guys but made it home safe after my 2.23 mile run 🤷🏻‍♂️ ##runwithmaud ##runwithahmaud ##fyp

A video of Demsick's run has been seen and shared several million times, and it has also raised his awareness and exposure to other high-profile cases, including Louisville's Breonna Taylor, a 26-year-old former EMT who was shot and killed after Louisville Metro police officers executed a no-knock search warrant at her apartment in March.

"The most amazing thing that has come from this is being invited to the conversations with people that have been fighting this fight for years and hearing the stories that I didn't hear very often," Demsick said.

Demsick's latest video is directed toward the National Rifle Association (NRA) about Taylor's boyfriend, Kenneth Walker, who has been charged with attempted murder after shooting Sgt. John Mattingly during the raid. Walker's attorney claims Walker thought Taylor's apartment was being robbed and fired out of self-defense. A wrongful death lawsuit Taylor's family filed against the officers involved claims Walker called 911 as officers "fired shots into the home from outside."

Demsick, a licensed gun owner, believes Walker had a right to protect his home and thinks the NRA should agree.

"If you guys believe in the right to defend ourselves and property, I'm surprised that you guys haven't made any statement in defense of Kenneth Walker," Demsick said.

Demsick questions how people and groups like the NRA decide what causes to fight for.

"Honestly, I think me and a lot of Americans are sick of the political divides, where we put the identity of the person over the value of their lives," he said. "What about the sanctity of Breonna Taylor's life and Ahmaud Arbery's life? We need to stand up against that kind of injustice, loudly."

Despite threats from the Ku Klux Klan and others, Demsick is not biting his tongue.

"It seems like every time something like this happens, people try to find an excuse for why it was happening that doesn't have to do with race," he said

The former pastor admits he was one of those people.

"I sometimes was so desperate for it to not be about race, to not be a broader incident," he said. "That it's just a tragic circumstances and nothing more. But we sure have a lot of these stories and the excuses don't seem to line up and make sense in the grander scheme of things."

He has also changed some of his thoughts on, what some call white privilege.

"I thought there was no such thing as white privilege," he added. "... (When) I pictured white privilege, I pictured people on a yacht, sipping champagne, laughing about how they didn't have to work for it. And I said, 'That's not my life. I've struggled; I have trials.'"

Demsick admits he had heard stories involving injustices against blacks before but said, "I lived mostly in my bubble, and, every once and a while, I'd hear a news story and think it was exaggerated." He said he later learned he was looking at the issue from the wrong perspective.

"It wasn't until I started paying attention to people of color, sharing with me stories of where they had this lack of human decency and expectation of them which resulted in this prejudiced that negatively impacted their lives," he said.

Dr. Ricky Jones, a professor of Pan African Studies at the University of Louisville, commended Demsick's efforts but doesn't expect the NRA to respond to his message.

"Black people are always suspects, and white people are always considered safe or saviors," Jones said. "... What brother Demsick did was great, but there is no historical evidence that we are going to have any substantial white brothers and sisters who are going to follow suite to really bring about true equality in the country.

"If we study our history, we know that the NRA is always opposed to gun control ... unless black people have the guns," he added.

Despite the actions of Demsick and others, Jones doesn't expect to see a lot of opinions and attitudes change and said neither should anyone else.

"What are black people going to do to defend themselves, to fight for their own humanity and hope, that at least some percentage of whites will partner with them?" he said. "That's really the question. The question isn't whether or not we're going to have this huge percentage of white people do it, because they're not. They never have and never will."

Jones, a Navy veteran, explained white privilege from his perspective: "It gives them the luxury of ignoring black suffering. So, if people believe that the playing field really is even and America is the land of equal opportunity, regardless of race, then whenever you see black suffering, even black death, among black men, women and children, remember, we have children who have been killed. Trayvon Martin was a child; Tamir Rice was a child. So, even when we see that, whites can afford to ignore it."

Jones isn't even confident the local and nationwide outcry will continue.

"We'll pay attention to it for a week or two," he said. "You give it three months; I'll be surprised if anybody is talking about Breonna Taylor or Ahmaud Arbery anymore. That's America.

Meanwhile, despite the threats against his life, Demsick plans to continue fighting against injustices.