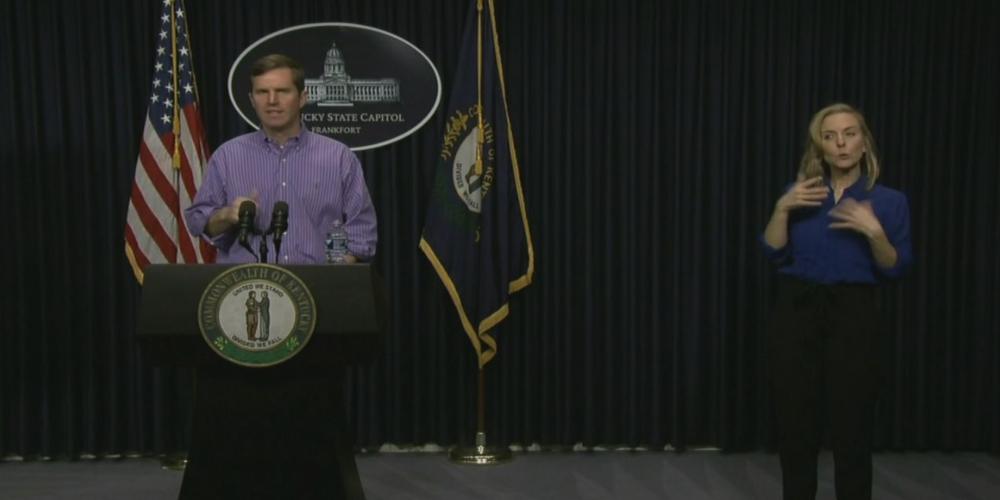 Gov. Andy Beshear announced Kentucky's third death related to the novel coronavirus during his daily update on the spread of COVID-19 in the commonwealth on Saturday. 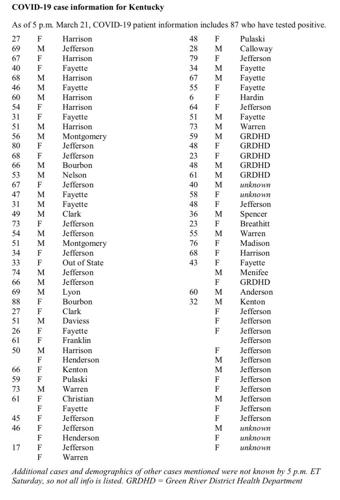 According to Gov. Andy Beshear, there are now at least 87 confirmed cases of COVID-19 in Kentucky, which is a jump from at least 63 confirmed cases reported Friday afternoon. (Courtesy of the governor's office) 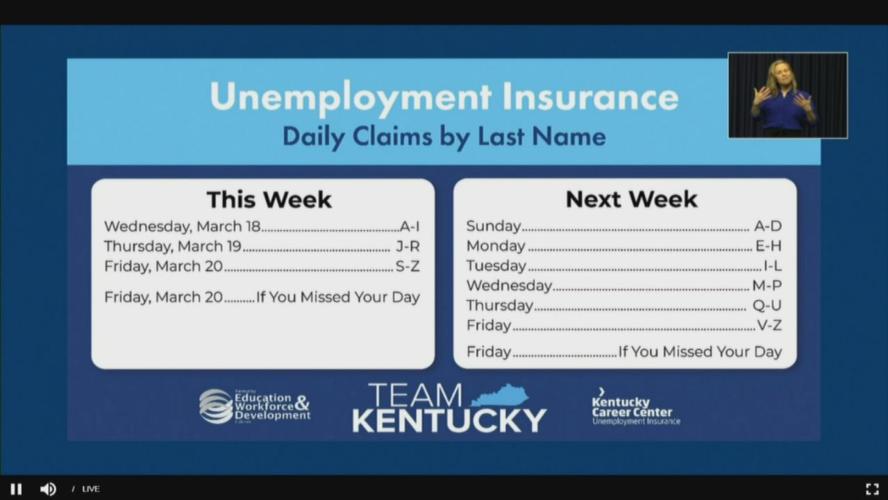 The list of dates Kentuckians can apply for unemployment based on the first letter of their last names.

LOUISVILLE, Ky. (WDRB) -- Gov. Andy Beshear announced Kentucky's third death related to the novel coronavirus during his daily update on the spread of COVID-19 in the commonwealth on Saturday.

The patient who died was a 67-year-old man from Anderson County, Kentucky. A number of other health factors contributed to the man's death, Beshear said.

The Governor's Mansion will be lit green — "the color of compassion," Beshear said — Saturday night and every night a death related to COVID-19 is reported in the commonwealth.

To show a small, yet significant message of compassion, empathy and renewal for each Kentuckian who passes related to #COVID19, Britainy and I are lighting the Governor's Mansion green. We are thinking of those we have lost. Our prayers are with their families & loved ones. ^AB pic.twitter.com/UCKBwF3QEQ

Spencer County, Kentucky, also reported its first confirmed positive case of COVID-19 on Saturday. The patient is a 36-year-old man, according to Beshear.

The number of reported cases around the commonwealth will become "more uncertain" as Kentucky's testing capacity increases, the governor added.

"I know those numbers won't line up perfectly," Beshear said. "It's the best that we can do right now. ... We expect new positive cases every day."

"This disease is really contagious," Stack said. "It spreads very easy from one person to another. ... You put a whole bunch of people together and you have one infected person, and a whole lot of them get infected, then it's like buckshot: They all scatter and they spread it everywhere they go."

Beshear is asking anyone who started an unemployment application this week to finish it by 11:59 p.m. Saturday. If you don't, there's a chance your application will not be processed and you may have to apply a second time.

"These are already frustrating enough times," Beshear said. "We want to make sure you get those in."

Starting Sunday, only people whose last names start with letters A through D can apply. There are specific times through the remainder of next week when you can apply for unemployment based on the first letter of your last name.

CRAWFORD | Is this thing on? Can rout of USF be a re-start for Louisville football?