LOUISVILLE, Ky. (WDRB) -- A detective with the Louisville Metro Police Department's Sex Crimes Unit is accused of sexual assault. Now the whistleblower, a fellow detective, says he's fighting to keep his job for speaking up.

"If you see something, say something," that's LMPD's motto when they investigate crimes. As Louisville attorney Tom Coffey puts it, the officer is being punished for doing just that.

"I've been employed with Louisville Metro for 12 years, and the last six years I've been a Sex Crimes Unit detective," Pedigo said at the time during a press conference about the two-day operation.

Now, he is being accused of sexual assault himself.

"Pedigo, who was alleged of committing a sexual assault himself, remains in the Sex Crimes Unit," said Coffey.

According to a lawsuit filed against LMPD on Thursday, Sex Crimes Unit Detective Jason Moseley was contacted by a victim's advocate with the Governor's Human Trafficking Task Force who "expressed her concern" that Pedigo would be working human trafficking cases.

The advocate claims to have been sexually assaulted by Pedigo and "feared for other victims whom Pedigo would be in contact with" in the role.

"Jason (Moseley) has a duty to disclose that,” Coffey explained. “He does that."

The lawsuit notes that Moseley, an officer on the force since February 2012, reported the information to his superiors, Sgt. Anthony Doninger and Sgt. Amanda Steelye with the Crimes Against Children Unit.

The sergeants referred the victim's advocate to LMPD's Professional Standards Unit, which interviewed her.

It goes on to say Mosely was told by his superiors "if he did not resign voluntarily then when he was demoted, which would happen posthaste, they would see to it that he was reassigned to the worst placement they could find for him."

"All that work that he's put into his career,” said Coffey. “He has now been demoted back to the Eighth Division."

Coffey has reasons to believe this is retaliation for stepping forward.

"It's just too obvious what happened," Coffey said. "When Jason makes the disclosure to Sergeant Doninger, about Doninger's longtime friend, colleague and beat officer, Kris Pedigo, Kris Pedigo stays, and Jason has to go."

Coffey says there is only one interest and that’s justice for Moseley.

LMPD did not respond to a request for comment.

You can read the full complaint in the document below: 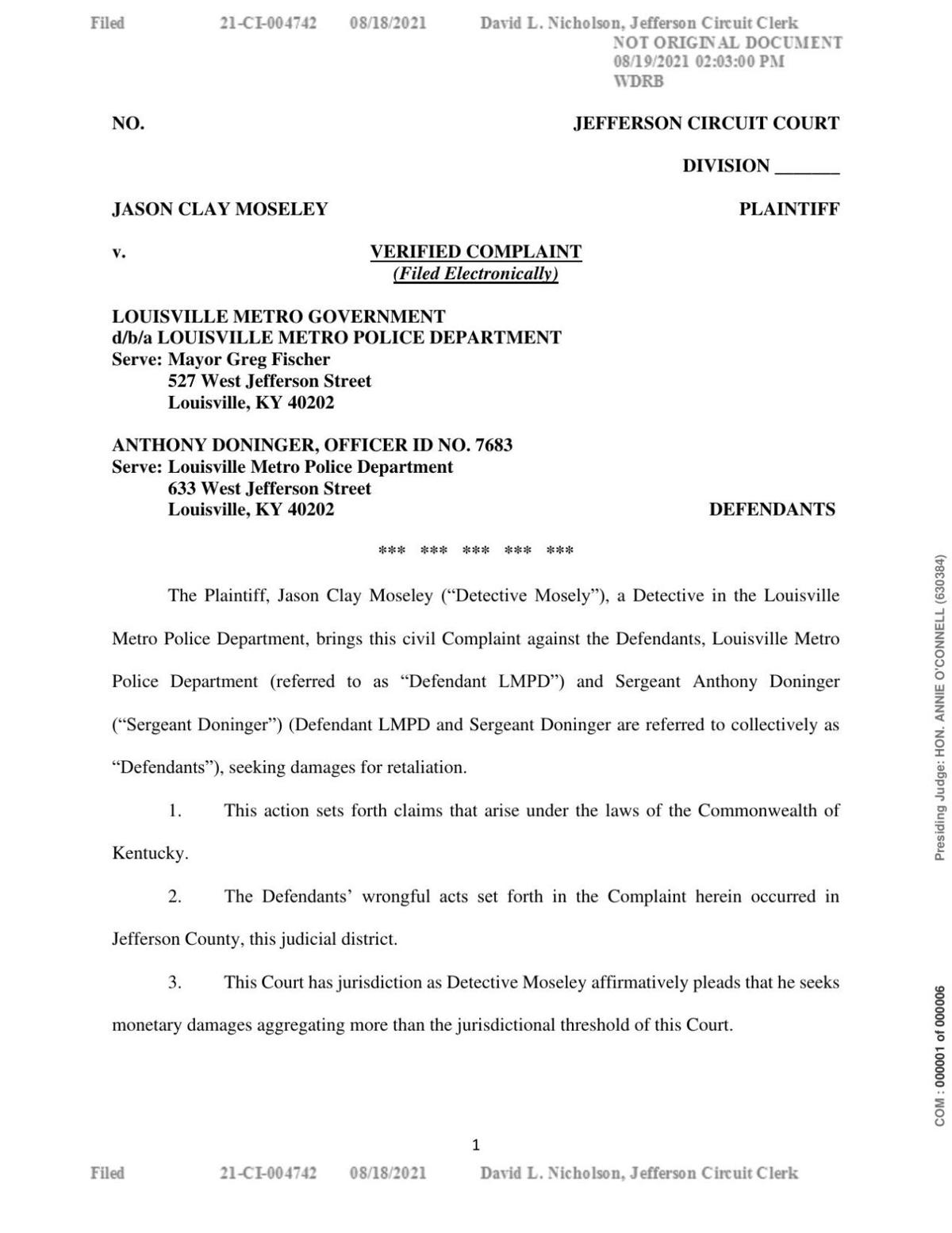