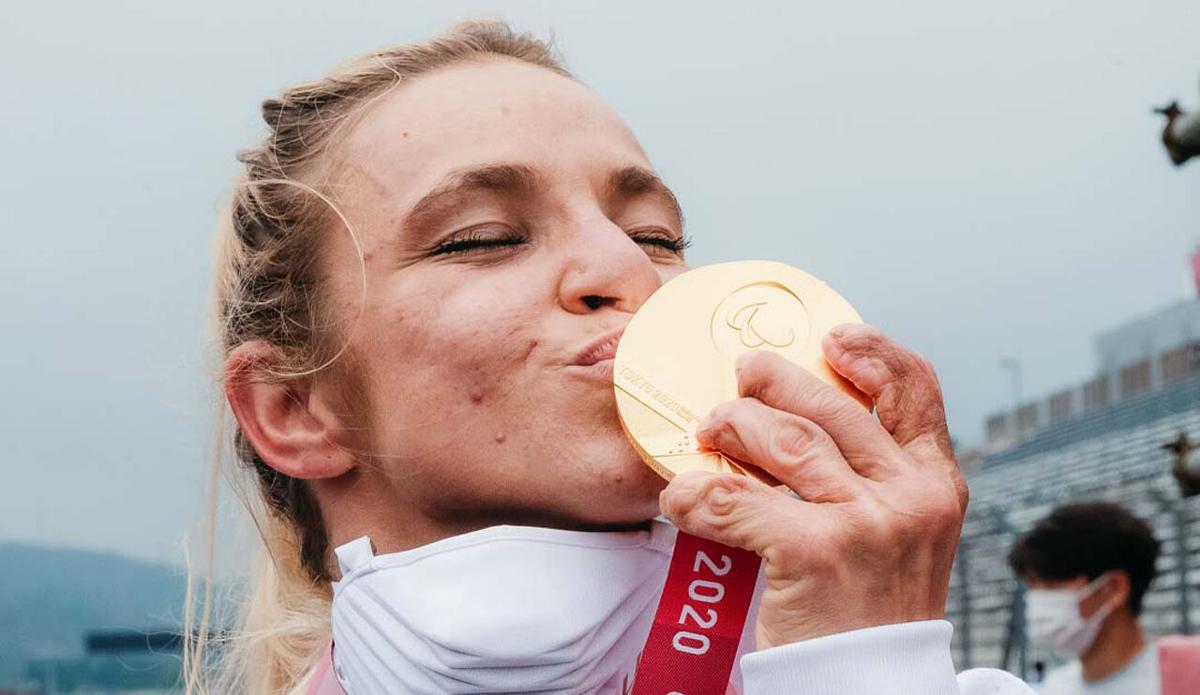 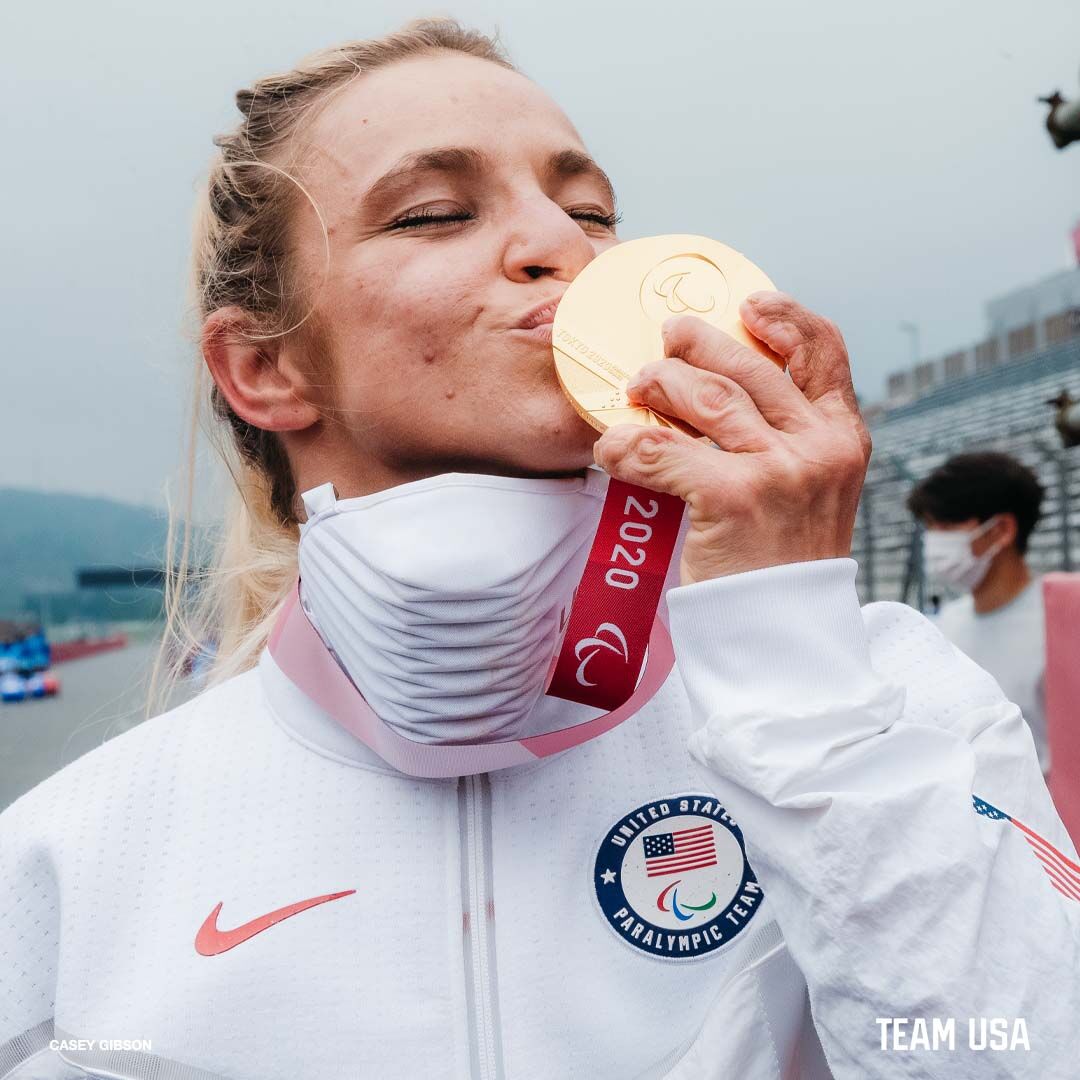 Team USA tweeted Tuesday that the Atherton High School grad is officially a gold medalist at both the Summer and Winter Paralympics, after she came in first in the in the H4-5 time trial, a road cycling event.

😚🥇@OksanaMasters is officially a gold medalist at both the Summer and Winter Paralympics. #TokyoParalympics pic.twitter.com/mLJPEuMThe

It is her ninth Paralympic medal.

Masters was born in the Ukraine and was adopted by a woman in New York. She moved to Louisville when she was 13.

A thought recently struck Masters: What would young Oksana, the one who shuffled between Ukrainian orphanages, think of this grown-up version?

The young Oksana was always resilient, determined and headstrong — qualities that helped her persevere through years in an orphanage and with birth defects believed to be from the aftermath of Chernobyl, the world’s worst nuclear accident. That malnourished orphan eventually was adopted by her American mom.

Now 32, Masters remains just as resilient, determined and headstrong — qualities that helped her rise to the top in multiple Paralympic sports spanning the Winter and Summer Games. She cruised to a gold medal Tuesday in her classification of a hand-cycle time trial in Tokyo. It was her ninth career Paralympics medal and third of the gold variety.

“All the stuff that was ingrained in my younger self, are also the reasons why I’ve been able to, with the support of so many people behind me, get to where I am today, " said Masters, who will compete in a road race Wednesday (late Tuesday in the U.S.) at the Paralympic Games. “I’m hoping that my journey is helping inspire that next young girl.”

It’s been quite a journey for Masters, who was born in 1989 with legs that were different sizes and missing shinbones. She also had webbed fingers, no thumbs, six toes on each foot, one kidney and only parts of her stomach.

Being from the region near Chernobyl, the connection was made with the nuclear accident that happened in '86. It’s thought her birth mom either lived in an area that was contaminated or ingested produce that was riddled with radiation, leading to in utero radiation poisoning.

Masters had her left leg amputated near the knee at 9 and the right one at the same spot five years later.

Fast-forward to the present: There she was a few weeks ago, riding her hand-cycle around Champaign, Illinois, to prepare for Tokyo. All the more remarkable given she had a tumor removed from her femur in late May — a surgery that had some wondering if she would be ready.

She would. Not only that, but turned in an impressive performance during a race Tuesday in Tokyo that she won by a 1-minute, 46.48-second margin.

For making it back, she credits resiliency, a word she doesn’t throw around lightly.

As a child, she was shuttled between three orphanages. She tried to remain strong but often wondered — would someone rescue her?

That someone would be Gay Masters, who saw a black-and-white photo of a 5-year-old Oksana in a Ukrainian adoption notebook.

The process, though, took more than two years after the Ukrainian government placed a moratorium on foreign adoptions. Gay sent care packages filled with Teddy bears to young Oksana.

The packages never got to her.

Oksana thought she was on her own again. That is, until one night, with the paperwork finally approved, Gay arrived to take her new daughter home to Buffalo, New York.

They've overcome a lot — together. Malnutrition (she weighed about 35 pounds when her mom took her home, which is healthy for a 3-year-old but not for someone who was nearly 8). Early language barriers (they worked through it with gestures and pointing at phrases in a book). Walking on tippy-toes (that's how Masters compensated for her differing leg heights). Surgeries (to amputate her legs).

At 13, Masters discovered rowing. The pull of the oars and the push against the water became a release for her, a “healing from my past,” she once said.

That started her on a path to where she is now. Her first Paralympic Games medal was in rowing, a bronze in 2012 with partner Rob Jones. She would capture seven more medals in cross-country skiing and biathlon ('14 and '18) and will be a favorite in her classification of the hand-cycling events in Tokyo. She's also training for Beijing, too, which will be in about six months.

“It's not about the medals," said Masters, who went to high school in Kentucky. “It’s not about anything else except leaving a legacy, being one example for that young girl to see.”

She recently partnered with Secret deodorant as part of a campaign called “ Watch Me,” which encourages young girls to stay in sports with resources and support. There were murals placed in New York City, Philadelphia and Atlanta that feature Ashleigh Johnson (water polo), Chiney Ogwumike (WNBA), Chelsea Wolfe (BMX), Alex Morgan (women’s soccer) and Masters.

“There’s so much power when you’re able to have something that you can look at and see and be like, ‘OK, it’s here. It’s doable,’” Masters said. “I’ve always been about seeing is believing, and when you can see something, you can be it and achieve it.”

Determination. Another important word to Masters.

Because determination got her through this: A few weeks before the 2018 Paralympic Winter Games in Pyeongchang, Masters slipped on the ice in Montana, where she was training, and dislocated her right elbow. She recovered in time to win five medals, including two golds in cross-country skiing events.

Afterward, she underwent a procedure to fix her elbow.

“She’s overcome so much,” her mom said.

Gay recently moved to Champaign to be closer to Masters and Masters' boyfriend, Aaron Pike, a five-time Paralympian who's competing in track events in Tokyo along with the marathon. With fans not really permitted to attend the Paralympics due to coronavirus restrictions, Gay headed to Colorado Springs, Colorado, for a viewing party sponsored by Toyota.

“Just amazing," Gay said after the race. “Last night, she texted me and said she was very unsure. She thought she couldn't finish the race. She clearly could.”

Headstrong — another word Masters uses. Once she gets a goal in mind, she chases after it. Just something she learned from her younger self, who rarely took no for an answer.

“Not too long ago, I was honestly reflecting about little Oksana back in the orphanage ... about staying true to her and who she is and chasing those goals,” Masters said. “Maybe sometimes you can’t physically see your dreams, or see the dream that you're dreaming that you want, doesn’t mean it’s not going to happen.”