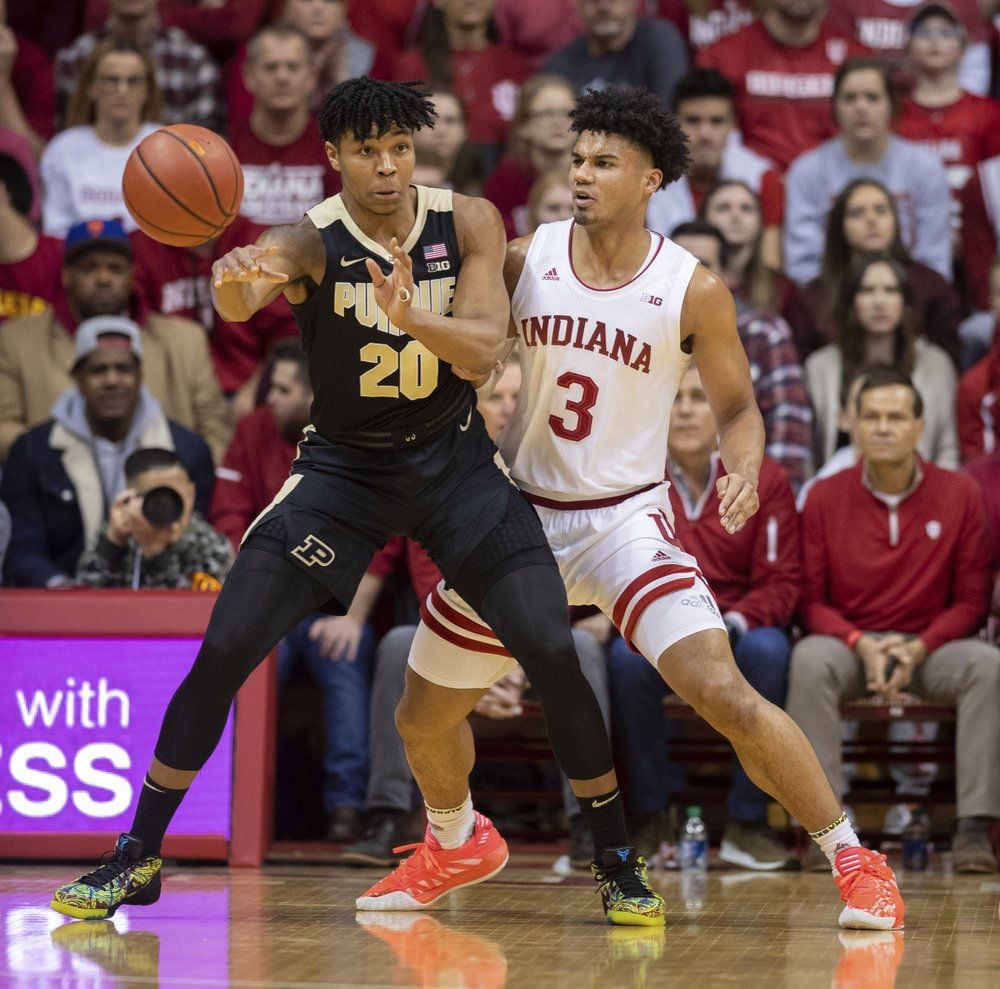 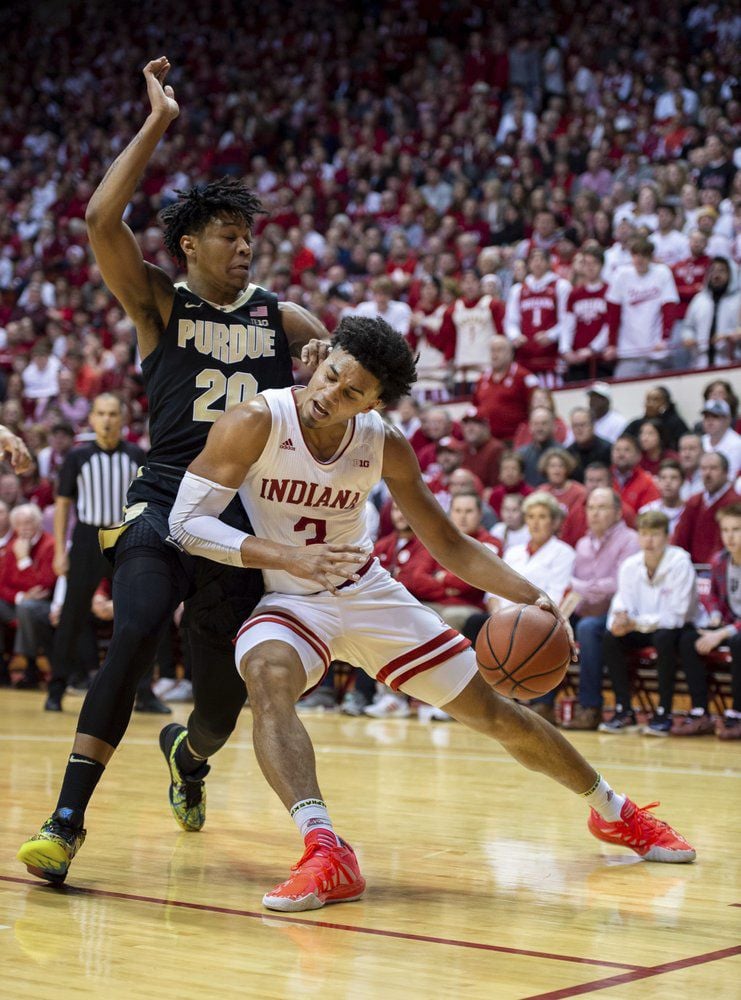 Indiana forward Justin Smith (3) makes contact with Purdue guard Nojel Eastern (20) as he drives the ball towards the basket during the first half of an NCAA college basketball game, Saturday, Feb. 8, 2020, in Bloomington, Ind. (AP Photo/Doug McSchooler) 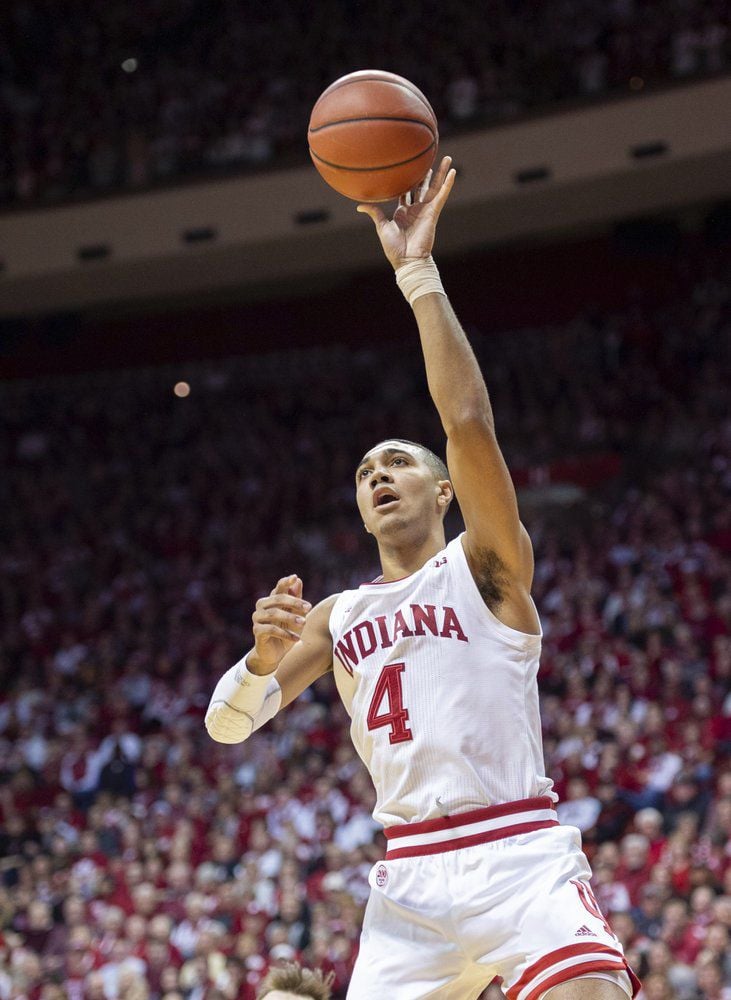 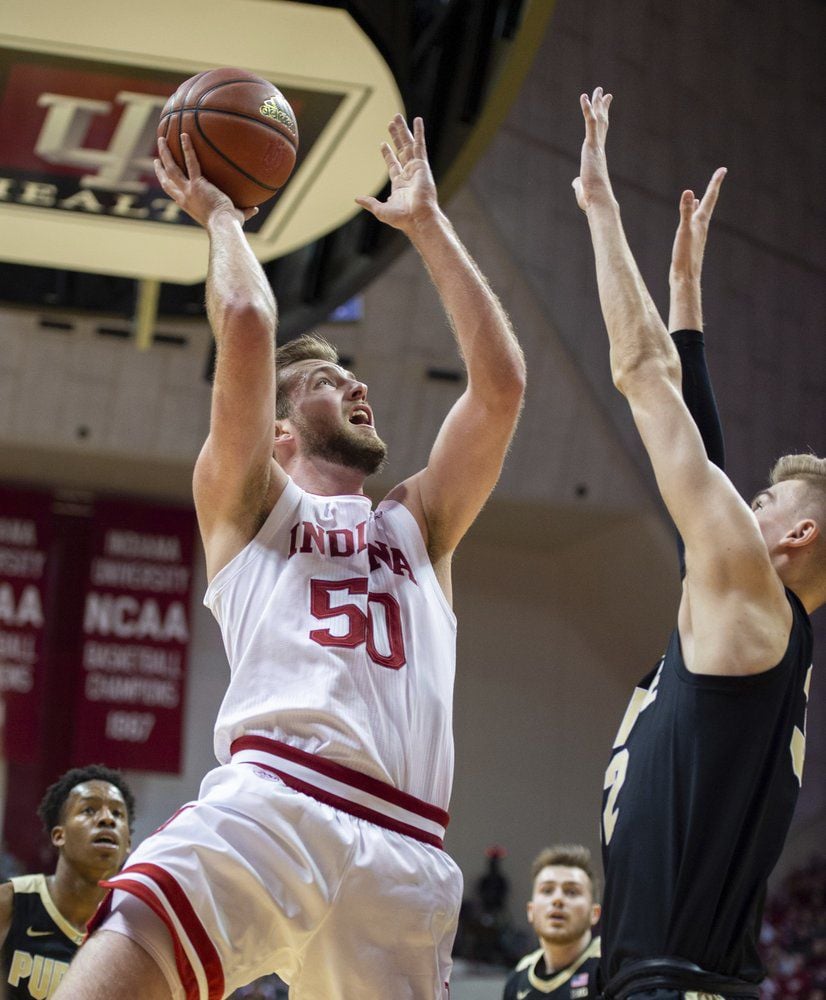 Indiana forward Justin Smith (3) makes contact with Purdue guard Nojel Eastern (20) as he drives the ball towards the basket during the first half of an NCAA college basketball game, Saturday, Feb. 8, 2020, in Bloomington, Ind. (AP Photo/Doug McSchooler)

BLOOMINGTON, Ind. (WDRB) — There were probably worse ways for Archie Miller and his Indiana basketball team to squander the zesty faith of the IU fan base on a day when Bob Knight made his first public appearance at Simon Skjodt Assembly Hall in 20 years.

Mine will begin with the Hoosiers' 74-62 loss to Purdue. In the vocabulary that students of Bob Knight will understand, this game was more season on the brink than get excited about March.

It bumped the sagging Hoosiers closer to the NCAA Tournament bubble.

It exposed the ugly issue this program has had defending the 3-point line this season, last season and Miller's first season in Bloomington, Indiana.

But, most of all, it was a jarring reminder of what Indiana used to be but has rarely been again since Knight's departure in 2000 — one of the best programs in the Big Ten or even the big dog in its own state.

At 15-8 overall and 5-7 in the Big Ten, the Hoosiers have played their way into a tie for 11th place in the league. They also stirred memories of last season when they lost 12 of 13 conference games and were one of the last cuts from the NCAA Tournament field.

After playing host to Iowa on Thursday night, Indiana plays four of its next five on the road — and this team is 1-5 in Big Ten road games.

"It gets miserable when you're losing," Miller said. "At the same time, we've got to find another way to get right up off that mat and respond."

The crowd, which filled all 17,222 seats with folks standing in every corner, did not wait for the final horn for confirmation of Matt Painter's fourth win in four tries against Miller. Fans began their exit with 3:09 remaining and Purdue leading 65-52.

IU was outscored in both halves and never truly pressured the Boilermakers in the second half, after Knight re-energized the crowd by ending his 20-year freeze-out of the school that fired him.

Knight was not given a microphone to address the crowd. Surrounded by his son, Patrick, as well as former players Quinn Buckner, Scott May and Steve Green, he walked to center court for a picture with about three dozen former IU players.

He didn't need a mic. After waving to the roaring crowd, Knight, 79, asked for quiet. Then he signaled to his guys to "PLAY DEFENSE." Keith Smart bent his knees and assumed a stance.

Maybe Knight watched the way Indiana failed to defend in the first half and allowed the Boilermakers to make half of their 10 3-point shots and surge to a 37-28 lead.

Purdue finished the game making half of its 16 shots from distance. They made 48% of their shots while limiting the Hoosiers to a 43% struggle.

They dogged Indiana into 14 turnovers, which was more than than 20% of the Hoosiers' possessions. The more the Hoosiers play, the more it is apparent Indiana does not have the kind of guards this program had when Buckner, Randy Wittman, Isiah Thomas and Smart were winning national titles. Not at all.

They were unable to follow all the instructions that Knight gave during a pregame talk in their locker room. The message was play hard and defend.

Then Purdue coach Matt Painter attacked the Hoosiers with nine guys — and all nine made at least two field goals.

"(Coach Knight) came in, talked to us, told us to play hard, which I thought we played really hard," IU forward Trayce Jackson-Davis said. "Just not the outcome we wanted. But like Jerome (Hunter) said, he's a legend. He's the reason why people talk about IU basketball, really."

The reason they talk about Knight, of course, is because he won three NCAA titles and 11 Big Ten championships.

Knight also put the Hoosiers in the NCAA Tournament in 24 of 29 seasons, including his final 15 years in Bloomington.

If the Hoosiers whiff on the tournament this season, it will be their fourth straight absence, including all three years under Miller.

"You're only as good as the next one," Miller said. "Today, as disappointing as it is, you have to find a way to be about the right things over the course of the next three, four days, to give yourselves a chance to play against another great team.

"And one way or another, you have to earn the right to break through. And we're at home again on Thursday. We've got to find a way to do that."

Or else this season will move even closer to the brink.