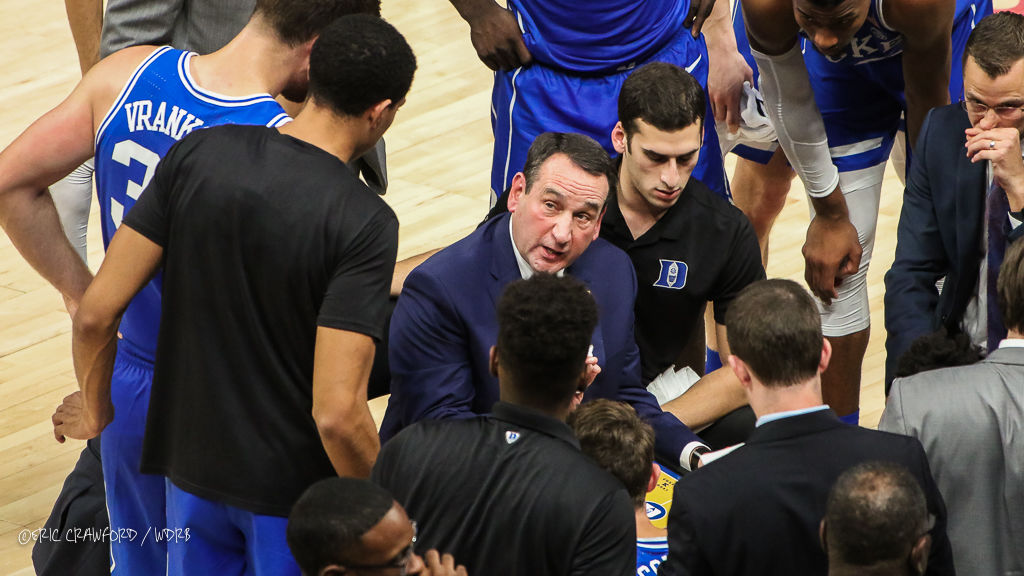 Louisville coach Chris Mack said Duke's Mike Krzyzewski, "does a really good job of putting (his players) in positions where they have a lot of space to operate."

Louisville coach Chris Mack said Duke's Mike Krzyzewski, "does a really good job of putting (his players) in positions where they have a lot of space to operate."

Every minute that passes without Williamson answering the pointed questions posed by Ford and her legal representatives, college basketball should raise the question the NCAA seems reluctant to ask:

What’s going on at Duke?

If a Kansas assistant coach appeared on an FBI wiretap talking with an Adidas rep about what Williamson and his people needed to attend a college, did the kid really commit to Duke to get his picture taken with Christian Laettner?

Until last weekend, I’d never heard of Ford. Now she is in line to do the best job of taking down the mythology of the Blue Devils since Lehigh (2012 NCAA Tournament) or Mercer (2014).

In 2010, Krzyzewski won his fourth NCAA title. I would argue it was one of his finest coaching jobs because that was not a roster that had NBA scouts hyperventilating.

Brian Zoubek at center. Kyle Singler, and The Jewelry Man, Lance Thomas, at forward. Nolan Smith and Jon Scheyer at guard. The Naismith Basketball Hall of Fame stopped tracking that Fab Five a long time ago.

Over the next four seasons, Duke lost in the Sweet Sixteen, first round, Elite Eight and first round of the NCAA Tournament.

Then a funny thing happened in Durham. Coach K started his own slobbering love affair with one-and-dones.

Laettner stayed four years at Duke. So did Grant Hill. And Bobby Hurley. And Shane Battier. And J.J. Redick. Greg Paulus. There were others. Many others.

That all changed after the Lehigh and Mercer debacles — and Kentucky dominating the recruiting scoreboard. From 1999--2014 Duke had five one-and-done players. From 2015-19, Duke had 14.

It always seemed like a puzzling marriage for a fashionable private school with an annual price tag of more than $55,000 well as an average GPA of 3.9 and SAT of 1450.

Hey, the world changes. What does not change is the urgency to win, win, win.

Jahlil Okafor. Brandon Ingram. Jayson Tatum. Marvin Bagley Jr. Williamson. Duke kept reeling them in, but these were not guys on the Grant Hill Plan.

They went to Duke to join, I believe they call it The Brotherhood.

When you invest that much time in the one-and-done pool, puzzling things can happen.

They appear to be happening at Duke — at least Ford is suggesting they are happening. On Sunday, it was reported that Ford had served “request for admissions” in Prime Sports Marketing lawsuit against Williamson.

They would like Williamson to admit that he received “money, benefits, favors or other things of value,” to attend Duke.

Or if he merely went to Durham to join The Brotherhood and study microbiology.

(Consider this the necessary disclaimer that Duke has said it did all the necessary background work on Williamson’s recruitment and everything is spotless. Just as it was at Louisville, North Carolina, UNLV, Cleveland State and blah, blah, blah.)

Let me also take a quick timeout: If you’d like to howl that if Williamson got paid, good for him. Anything he might have received was likely less than market value. ESPN gave Williamson more air time than Kevin Durant. President Obama showed up to watch him play.

But that’s another discussion for a room down the hall.

Under the current rules, if Williamson received extra benefits, that would push Duke into the same room with other programs that are dealing with the pay-for-play scandal like Louisville, which has already missed one NCAA Tournament and is in danger of another trip to the penalty box.

Did Williamson or his mother or step-father receive any goodies from Duke (directly or indirectly)?

I don’t have that answer. I realize Ford and her reps have merely made a request for information and that she's unhappy with Williamson because he dropped her group for another representative, costing her a lucrative client. Ford is looking for leverage. Causing a stir can create some.

But I can share the wiretapped words of Kurtis Townsend, assistant coach and ace recruiter at the University of Kansas during a conversation Townsend had with Adidas consultant Merl Code when the Jayhawks were locked in a recruiting battle for Williamson with Duke, Kentucky, Clemson, South Carolina and North Carolina.

Let’s follow the transcript of that conversation, reportedly about Williamson and his stepfather, Lee Anderson, between Townsend and Code:

Townsend: “Hey, but between me and you, you know, he asked about some stuff. You know? And I said, ‘Well, we’ll talk about that, you decide.’ ”

Townsend: “I’ve got to just try to work and figure out a way because if that’s what it takes to get him here for 10 months, we’re going to have to do it some way.”

Williamson and his family picked Duke, not Kansas. Ford has some questions about that.

The NCAA should have some questions, too.