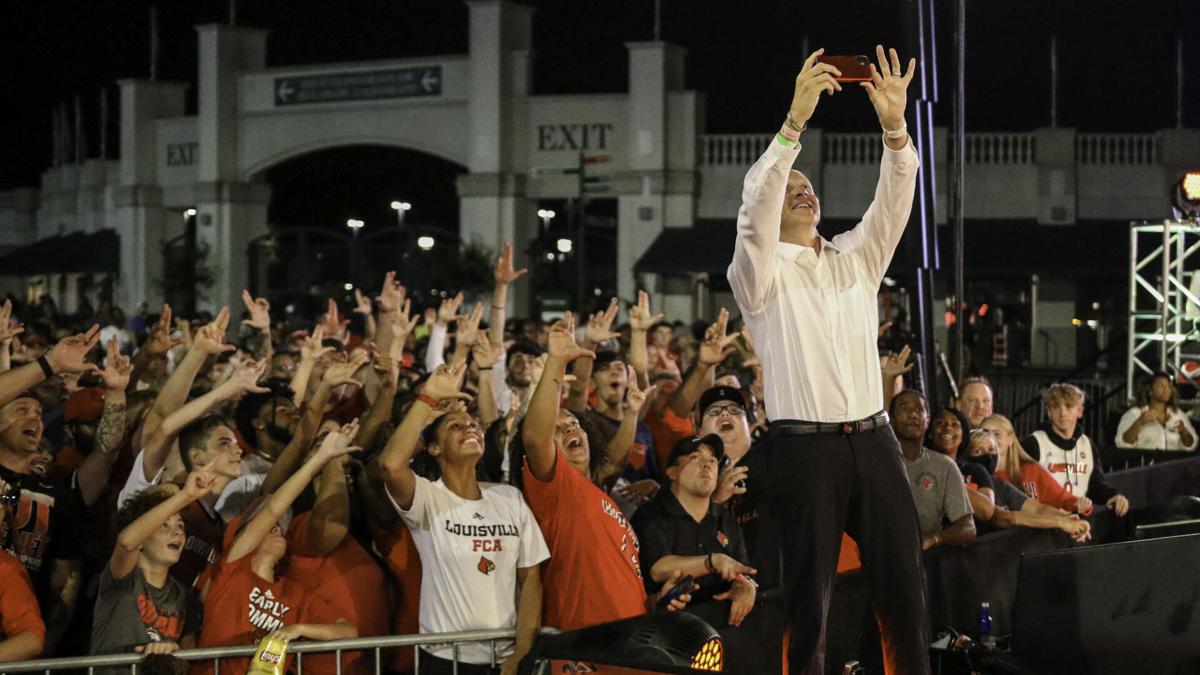 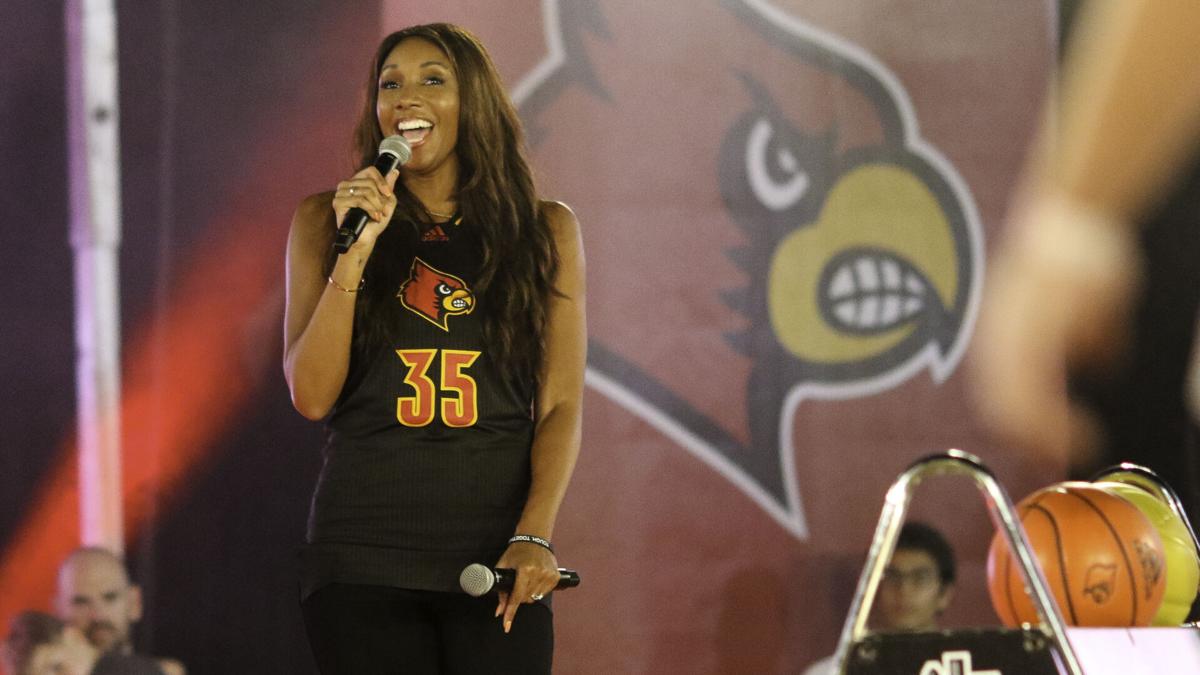 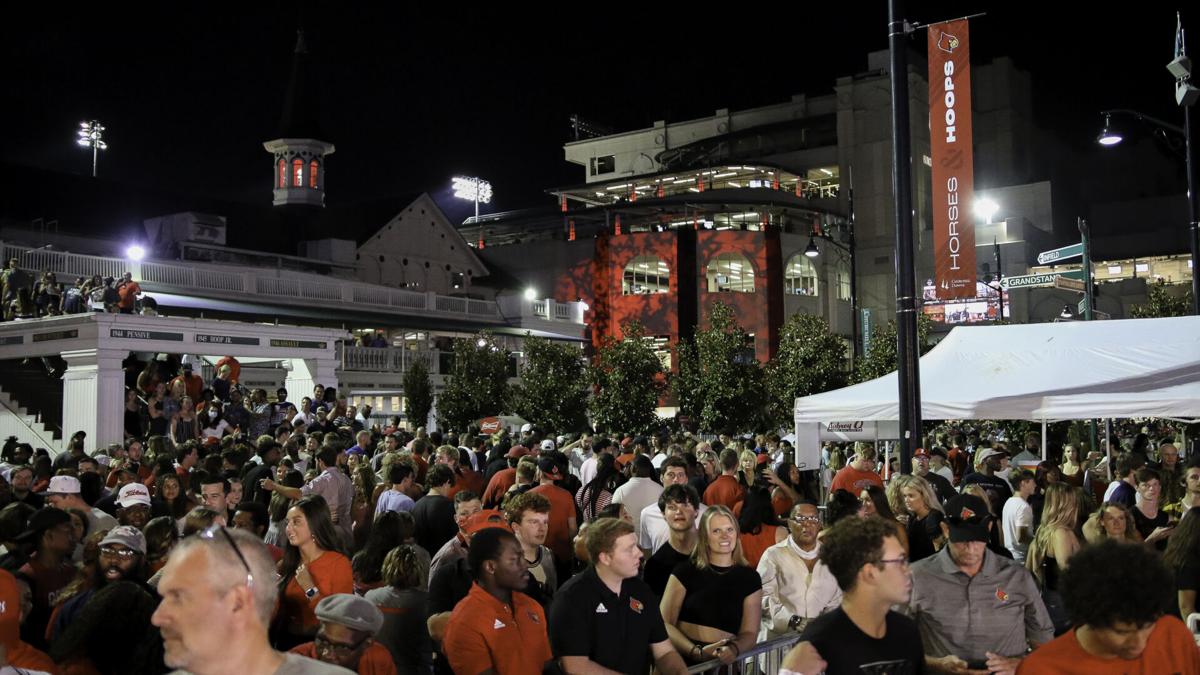 Fans cram the paddock at Churchill Downs during the "Louisville Live" Hoops and Horses event for Downs After Dark.

LOUISVILLE, Ky. (WDRB) – It's always visually stunning. The University of Louisville basketball program's "Louisville Live" outdoor tipoff event moved a few miles down Fourth Street from Fourth Street Live to Churchill Downs Saturday night, but the scene was no less electric for what has become a unique event in college basketball.

It's funny, because Louisville wanted to stage a more intimate tipoff event, in a different setting, knowing that it wasn't likely to draw 20,000 to a traditional "Midnight Madness" type of deal. It began with a court in Fourth Street Live and that city setting made for a great show, with the crowd packed in tight like you might see for a big-time pickup game.

At Churchill Downs, it turned out, the program could draw 20,000 to a tipoff event. Just a little more than that, actually.

I've been to 30 runnings of the Kentucky Derby. I've never seen the paddock more thick with people than it was on Saturday, to watch the Louisville men's and women's teams run through some drills and play to the crowd, and to watch the 1986 NCAA Championship team be honored.

A gallery of images from the "Louisville Live" basketball event at Churchill Downs.

This year's event raised the bar, with help from its host, NBC's Maria Taylor, who is unique among national sports media in her ability to connect with a live audience in such a celebratory and playful manner. She got an assist from Louisville great Angel McCoughtry

At its heart, it's a chance for Louisville fans to get a first look at the teams, to hear from the coaches, and to celebrate Louisville basketball.

And it's fair to say, after a long pandemic season of attendance restrictions and COVID precautions, Louisville fans were ready to celebrate.

Louisville coach Chris Mack walked onto the raised basketball court just inside the Churchill Downs entrance with a red blazer, black tie and rolled up program. His young son Braden wore the same, complete with his own rolled up program. They paid homage to Hall of Fame coach Denny Crum, who sat on the court, taking it all in.

"This crowd and these fans are just awesome," Mack said after the program.

Students chanted "Free Mack." They roared when Donovan Mitchell's latest shoe design was passed out by cheerleaders. They posed for group selfies with players, with Mack, and with Montrezl Harrell, who has ended an NCAA-mandated separation by returning to the program this week. He came to a basketball game a couple of seasons ago on his own. Saturday night, he was on stage, judging dunks (with an appropriately critical eye).

"Just enjoying the love, taking it all in," Harrell said. "I'm blessed to be able to come back. It's been a great weekend. The football team had a great comeback win. And this event was even more special tonight, doing it outside. I'm just happy to be back, glad that everybody's welcoming. It's special to me. I was blessed to win a national championship here. My kids and their mom are from here. I have a lot of ties here, and to be welcomed back with open arms is great. It's been a long time coming and it feels good."

If you were looking for insights into the team, it wasn't the place to be. A couple of three-point shooting contests and a slam-dunk contest aren't exactly the best way to handicap what is coming in for a pair of new-look outfits. Walz challenged fans to help his women's program average more than 10,000 in home attendance this season.

"We're here," said Walz, who stays out of the hype and lets his players put on the show, though he did bring his daughters Lola and Lucy onto the court for his brief comments. "Now we'll see if we can win some basketball games."

It was instead, as Churchill Downs often is for "Downs After Dark" programs, a place to see and be seen.

The 1986 NCAA champs took the court between the men and the women, with every player but Pervis Ellison and Kenny Payne present. ESPN's Jay Bilas, who played in that game for Duke, sent a special video greeting. Robbie Valentine spoke for the group.

"We're certainly proud to honor that team," Mack said. "It was goosebumps when they were announced at the football game, and then again tonight."

In the end, the event plays to a select group – recruits who come into town to watch the show. They sat courtside, with the crowd and Churchill Downs' Twin Spires in full view.

The program had to take several 15-minute breaks to let horses clear the paddock on their way to the track to race. That was about the only hitch, along with the notion that Mack would have to miss the team's first six games. On Saturday, Mack said his team will have to deal with it.

"It is what it is," Mack said. "I'm not really going to comment on it. I feel like the team's in great hands with Mike Pegues. Do I wish it was different? Yes. But when I was a little kid and kicked a soccer ball into the stands after we tied a game, my dad spanked me and I moved on. That's all I'm going to say about that. The team's in great hands. We've got a lot of time to prepare before Nov. 9. And Mike will do a great job in my absence. I'm just excited to get back when that day comes against Michigan State."

"It was an amazing time," Louisville men's captain Malik Williams said. "We had a great turnout. The guys were really excited, and it was great. Great thing for the city, great kickoff to our season."

Pedestrian identified in fatal crash on I-65 from Saturday night