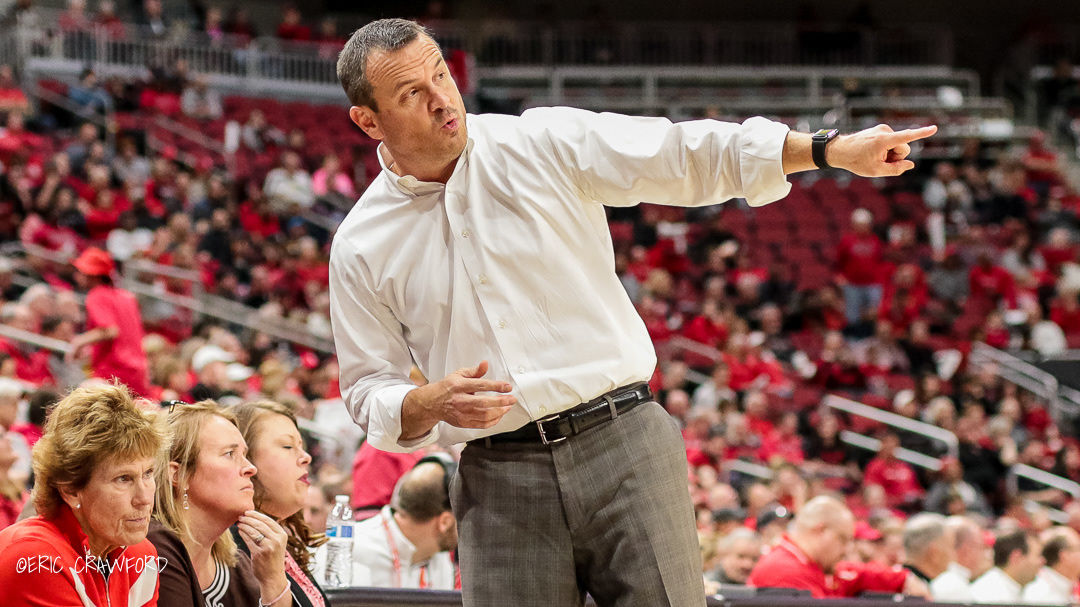 Louisville coach Jeff Walz says his team is in a "three-game tournament" is it pursues an ACC regular-season championship.

Jazmine Jones led Louisville with 18 points in a victory at Georgia Tech.

Louisville coach Jeff Walz says his team is in a "three-game tournament" is it pursues an ACC regular-season championship.

Jazmine Jones led Louisville with 18 points in a victory at Georgia Tech.

LOUISVILLE, Ky. (WDRB) – If you’re looking for a blueprint on how to react when you’re facing a good defensive team and your shots aren’t falling, you could do worse than watch a tape of the University of Louisville women’s basketball team managing the fourth quarter Thursday night at Georgia Tech.

The No. 5-ranked Cardinals made one field goal in the first six minutes of the quarter. Nothing was falling. Their leading scorer, point guard Dana Evans, had her leg elevated on the sidelines after rolling her ankle late in the third quarter. Former Cardinals’ All-American Asia Durr was in the stands but couldn’t help the Cards in this situation.

But Louisville got all the help it needed from its defense. While it was struggling to start the fourth quarter, Georgia Tech was struggling even more. And when Mykasa Robinson came on in relief of Evans with just under four minutes to play, the offensive spark she provided was more than enough to allow the Cards to get out of town with a 58-47 victory, their third straight.

“They defend extremely well,” Walz said of Georgia Tech in an interview with Nick Curran on his postgame radio show. “They caused us problems. And in the third quarter, we were our own worst enemy. I don’t know how many times we turned it over, but we only got seven shots ... But we did make a nice little run at the end of the third quarter ... Overall, we gave up 47 points. That’s a pretty good effort. This was a game I was concerned about. So I am happy to get out of here with a win and then move on to the next.”

Louisville held Georgia Tech to just 6-30 shooting in the second half. Robinson, after replacing Evans, made a jumper from the elbow to put Louisville up by nine. She then spotted Jazmine Jones running the court and threw a long pass ahead for a layup to bump the lead back to double-digits with 2:34 left. On Louisville’s next possession, she scrambled to get a loose ball, then alertly found Kylee Shook under the basket for a layup at the shot clock buzzer that made the lead 11 with 48 seconds left.

Her status is uncertain for Louisville’s weekend game at Pittsburgh.

“We’ll have to take care of her and get her some treatment,” Walz said. “Obviously she won’t do anything tomorrow ... She’s a competitor. She told me she was good to go again, and she came in and made a big one on the wing. Just really proud of a great team win ... We’ll see how Dana is this weekend, but I told our players in the locker room, it’s next one up. That’s what this game is all about. Who can step up and make plays to help us win?”

Louisville was catching a commercial flight back to campus after the game, which also isn’t ideal for an injured player.

The Cardinals opened the second half cold and Georgia Tech pulled within three when Evans hit a three-pointer and was fouled. She landed on the defender’s foo, and left the game with an injured ankle at that point, with 1:22 left in the period.

Evans returned early in the fourth quarter and made another three but left the game for good with just under four minutes left and Robinson had to take the Cards home the rest of the way.

“We got some easy ones in transition, which is what you have to do in a game like this,” Walz said. “And we made some big buckets on hustle plays.”

And then Walz and his team were off for the Atlanta airport with a little extra baggage: a 24th regular-season victory, against three losses, with three games to play in the season and an ACC regular-season title clearly in sight.

“It’s a three-game tournament now,” Walz said. “That’s how we’ll look at it.”

Is Vince Tyra leaving the University of Louisville?

Kentucky lawmakers meet to determine who should get pandemic bonus pay