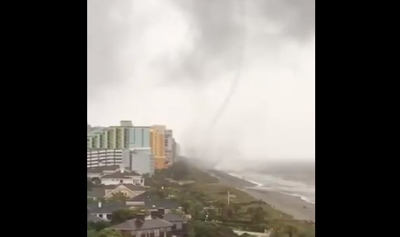 A waterspout turned into a tornado as it came ashore in Myrtle Beach around 3:25 pm on Friday. It was only on land for a minute or so tossing chairs and umbrellas into the air. Thankfully, no injuries were reported. Multiple people witnessed the event and quickly posted video to their social media accounts. Take a look...

Another vide of the tornado that touched down in Myrtle Beach around 3:30pm. This was taken from the Island Vista Resort by Cym Caprice. There has been some damage done. #scwx #ncwx pic.twitter.com/7RwM0yzObQ

Tornadic waterspouts are tornadoes that form over water, or move from land to water. They have the same characteristics as a land tornado. They are associated with severe thunderstorms, and are often accompanied by high winds and seas, large hail, and frequent dangerous lightning.

If a waterspout moves onshore, the National Weather Service issues a tornado warning, as some of them can cause significant damage and injuries to people. Typically, fair weather waterspouts dissipate rapidly when they make landfall, and rarely penetrate far inland.