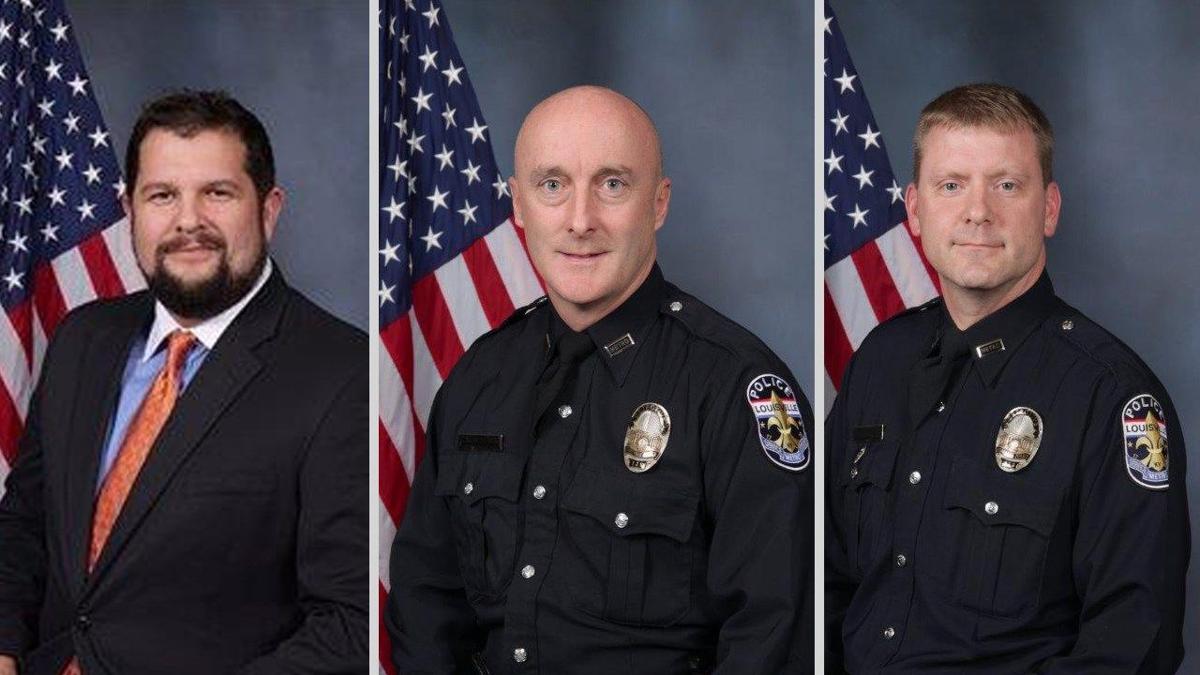 Judge Jennings said the three former officers committed "a very serious crime," but have paid restitution, been humiliated in the community and had no prior criminal history.

Stanfield, 45, who could have been sentenced to up to 21 months in prison under sentencing guidelines, has already paid $101,000 in restitution. Stanfield's attorney, Steve Schroering, said Stanfield "has an incredible amount of remorse for his actions."

Not long after Stanfield was sentenced, the judge used similar language when giving Roadhouse and Final the same punishment.

Prosecutors recommended probation instead of prison for all three men. The former officers pleaded guilty in October to wire fraud charges that included falsifying arrest citations to justify overtime hours.

Roadhouse and Final acknowledged wrongdoing but argued in court records that faking overtime to boost pay and retirement benefits were part of the "culture" of the department.

After the men were sentenced, LMPD Chief Steve Conrad sent out a statement about the case.

“We launched an investigation into this overtime abuse because the integrity of our department is important to us," He said. "We expect our officers to follow the laws we entrust them to enforce. We are cooperating with an audit to review our overtime system and already have instituted several additional safeguards. These actions by these officers violated public trust and we are committed to restoring that trust.”

And during the sentencing, Assistant U.S. Attorney Stephanie Zimdahl bristled at the allegation of stealing overtime being widespread in the department, calling it a "false narrative" and saying "this is not the general culture of LMPD."

She said the men were doing more than leaving work early and claiming overtime. They falsified citations, altering the time of the arrest and adding each other's names on the signature line, she said.

The men were claiming to work an "implausible" number of hours of overtime while either working other jobs or "sitting at home while pretending to be out protecting our city," Zimdahl told the judge.

Jennings called the falsifying of citations "the most disconcerting part," noting that it affected defendants and others in the court system more than padding overtime hours.

Still, attorney Brian Butler, who represents Roadhouse, called his client and Final the "creme de la creme of the police department" and said LMPD officers have a "history of leaving early" and collecting undeserved overtime.

"This is a part of the culture," he told the judge.

Attorney Scott C. Cox, who represented Final said that "to the extent it was part of the culture, it needs to stop and I think it has stopped. We did not intend to advance that as any sort of a defense. but it's something that if it is prevalent it needs to stop."

In a written statement to the judge, Final said his commanding officer would often send him home early and allow him to claim overtime he didn't work.

"This was not something that was hidden, this was done routinely, and everyone is aware of it," he wrote in his statement. "I have always been a 'rules guy,' I guess that I just began to go along with the cultural norms instead of following my own path of what I knew to be right."

The convictions came nearly two years after a WDRB News investigation exposed overtime abuse by several officers, including the three who have now admitted to the scheme.

In 2018, Louisville Metro Council requested an internal audit of LMPD's use of overtime between December 2016 and August 2018. The audit is expected to be released soon.

According to the U.S. Attorney, Stanfield, Roadhouse and Final schemed together from 2014 to 2017 to submit hours to LMPD when they actually didn't work the hours. They also failed to work during their assigned shifts, according to court documents.

In addition, the U.S. Attorney argued that the men claimed to have worked hours for the ATF as part of a special task force when they in fact did not work the hours. LMPD paid the three for those hours and was then reimbursed by the federal government.

Stanfield retired in February 2018 while under internal investigation for violating department policy by getting paid as a police officer while also working off-duty at UPS.

But the case was closed "by exception" because of his retirement, according to a letter from Police Chief Steve Conrad. Roadhouse retired shortly after the WDRB News investigation was published. Final resigned from the department when the trio was charged.

In September 2018, Louisville Metro Council passed a resolution requesting an internal audit of LMPD overtime spending from December 2016 to August 2018.

The WDRB News investigation found officers worked weeks or months without taking a day off -- including weekends -- logging what experts say would be either suspicious or dangerously long hours. Yet the department has no internal policies meant to force officers to rest or avoid marathon shifts.

Roadhouse, for example, worked more than 200 hours during the first two weeks of January 2017, including back-to-back 17-hour days. He followed that with a 21-hour day, according to his time slips. In all, his workload during that time yielded about 120 hours of overtime.

Roadhouse's time slips, obtained under the Kentucky Open Records Act, show he worked 84 consecutive days from January 1 to March 25, logging, on average, about 12 hours a day.

Final worked every day in February 2017, including weekends, averaging about 12 hours a day, for the police department while also working a secondary job providing security at Male High School, according to records.