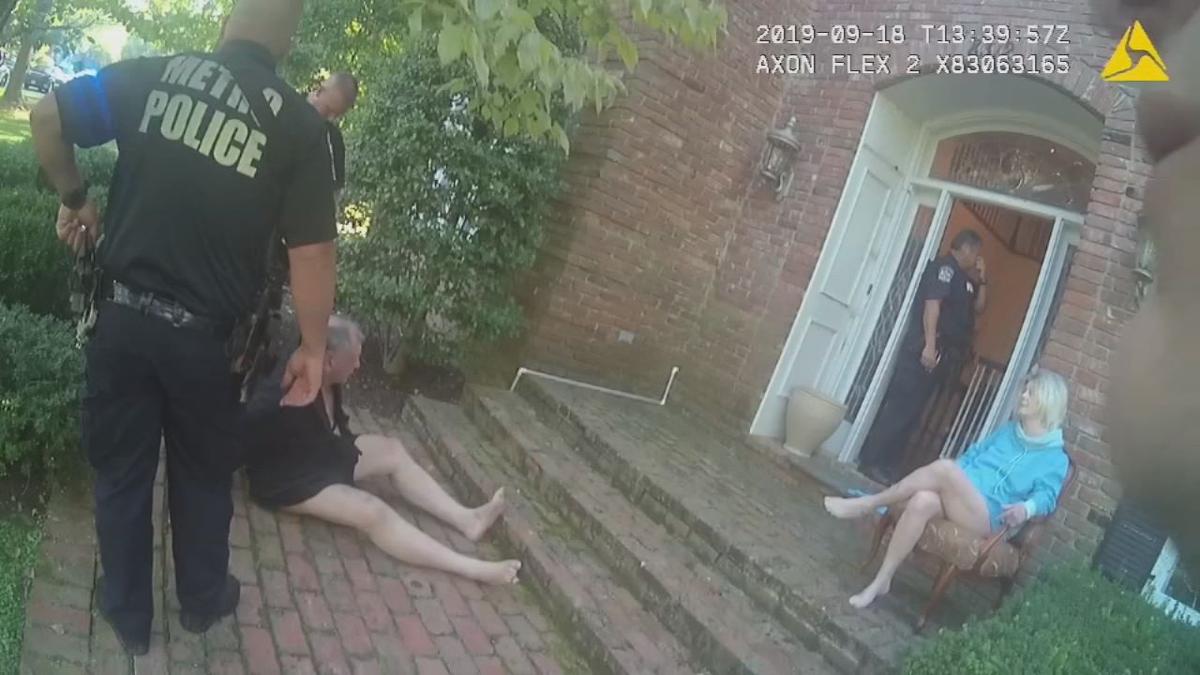 Pictured: a police officer stands near a man who was slammed to the ground after a false report that he had shot his wife in the head. 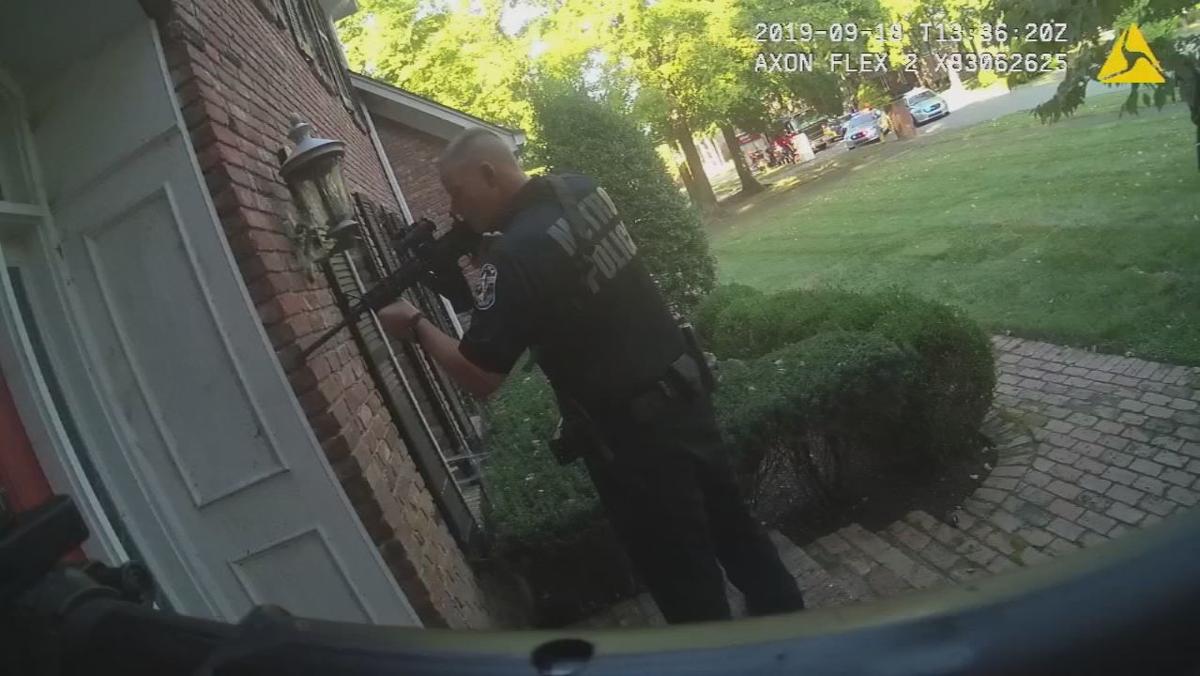 Pictured: a still image from police body cam footage that shows an officer with his weapon drawn outside the home of a man in Jeffersontown, Ky. 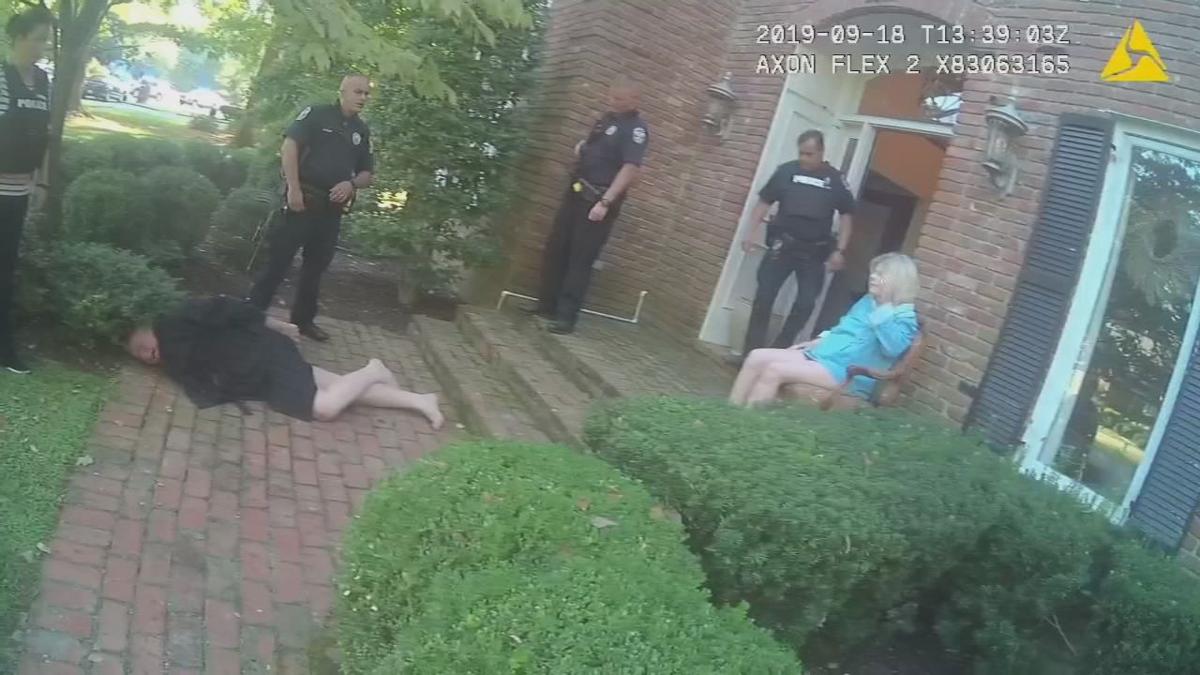 Pictured: a police officer stands near a man who was slammed to the ground after a false report that he had shot his wife in the head.

Pictured: a still image from police body cam footage that shows an officer with his weapon drawn outside the home of a man in Jeffersontown, Ky.

LOUISVILLE, Ky. (WDRB) – Frank Serapiglia says he was in his kitchen drinking coffee and reading the news early one morning last September when he heard yelling and noticed several police officers outside his home with guns drawn.

Serapiglia, 71, thought officers must be pursuing a suspect running through his neighborhood. Then he heard banging on his front door.

As Serpadilia was opening the door in his bathrobe, a police officer reached in the house, grabbed him and threw him to the pavement, where he landed face first, according to police body cam video that captured the incident.

The video below shows part of the body camera footage captured by officers; it shows two different angles of Serapiglia being dragged out of his home.

"Get on the f***ing ground!" an officer yelled, as another officer handcuffed him and kneeled on Serapiglia's back.

When Officer William Kline grabbed Serapiglia, "he lost his footing and fell to the ground," Stettler said, according to body camera video.

"As Dave said, he wouldn't come out, wouldn't get on the ground," Kline said, according to body cam video. "We pulled him out and he lost his footing and fell."

The body camera video challenges the official police narrative of the events of last September, raising questions that now are part of a lawsuit filed in Jefferson Circuit Court on March 5.

Below body camera is from Sgt. Jerome Passafuime explaining his account of what happened.

For example, Kline says Serapiglia opened the door but wouldn't come out.  But the video shows Kline immediately reaching into the house and hurling the man to the ground outside.

"Take these ****ing handcuffs off me; you don't think I'm a ****ing problem, I opened the door for you!," Serapiglia yelled.

Police were responding to a 911 call made by Serapiglia’s wife while he was downstairs.

The woman had called 911 in a “delusional state” claiming her husband had shot her in the head, according to the lawsuit filed last week against Louisville Metro Police officers, the Jeffersontown Police Department and the city.

"What did she call the police for?" Serapiglia repeatedly asked. "There's no ****ing problem. What the heck is the deal?"

As Mrs. Serapiglia is brought downstairs and outside, disheveled but not hurt, an officer reported to dispatch that “there was no shooting,” according to body cam footage.

"We're out," a J-Town officers says, according to body cam. Another officer laughs.

When police don't respond to his questions, Serapiglia asks his wife why she called 911.

"I thought you shot me," she quietly responds.

Serapiglia explains to police that his wife had previously been hospitalized, had seizures and mental health issues.

After several minutes, an unidentified officer comes up and asks why Serapiglia is still handcuffed on the ground.

"What's going on?" the officer asks.

Officer Stettler responds that Serapiglia is "still pissed," according to his body cam video.

Meanwhile, Sgt. Passafume  and Serapiglia are arguing about how police handled the incident.

"What did you think we were going to do?" the sergeant asks him, "say 'Hey good morning, did you shoot your wife in the head?'"

Serapiglia yells back that police could see he was in his bathrobe and not a threat.

An LMPD spokesman said the department does not comment on pending litigation.

He was taken to the Norton Brownsboro Hospital Emergency room with multiple injuries, including head trauma, according to the lawsuit.

Attorney Thomas Clay, who is representing Serapiglia, said police should have known immediately that the woman was not in danger

She called 911 in a "delusional state" and "calmly but vaguely reported that she had been shot in the head but didn’t know if she was bleeding," the suit claims. "She did not sound like she was in any distress or in any pain," or seem afraid.

Jeffersontown Police, who responded first, according to the lawsuit, saw Serapiglia’s wife at the window in her bedroom and “should have known at that point she had not been shot.”

But J-Town police have not turned over any body cam video or other documents related to the incident, claiming they would not have responded to the call, according to the lawsuit.

Assistant chief of Jeffersontown Police Steve Schmidt declined to comment on the case but did acknowledge that J-Town officers did respond to the scene.

As officer Kline's body cam video comes to an end, Serapiglia is on his knees trying to crawl up his porch, not allowing anyone to touch him.

He looks back and tells them, "thank you guys, for ****ing protecting me."