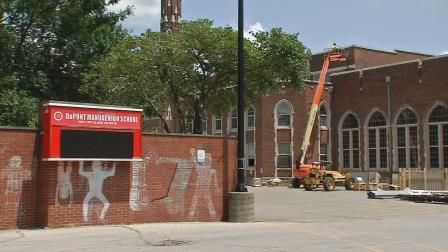 Crews work outside duPont Manual High School, which is undergoing a $35.3 million renovation that includes a new HVAC system. 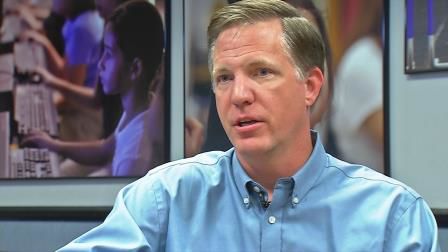 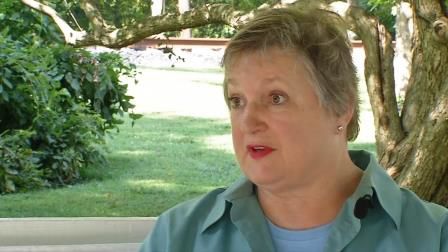 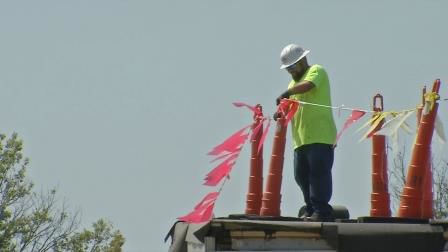 A construction worker working on the roof of Hite Elementary School. The Jefferson County Board of Education approved $7 million in improvements at the school, including a new HVAC system and partial roof replacement. 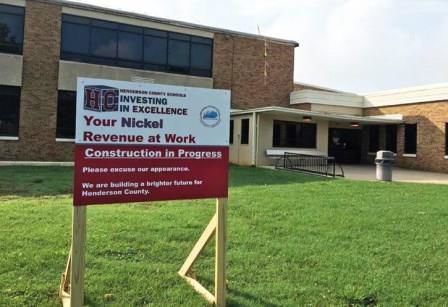 A sign outside a school in Henderson County highlights part of how the school district's nickel tax is being spent. Eric Kennedy, director of advocacy for the Kentucky School Boards Association, says efforts by Henderson County Schools helped the district survive a recall election after it passed a "nickel" tax for facility improvements. (Photo courtesy KSBA) 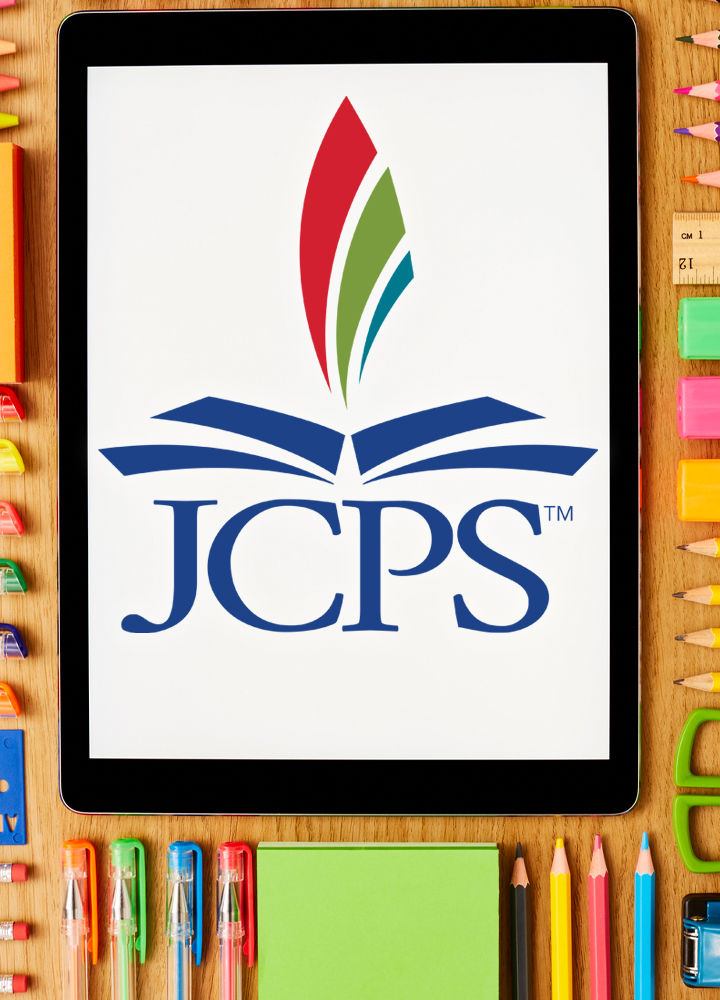 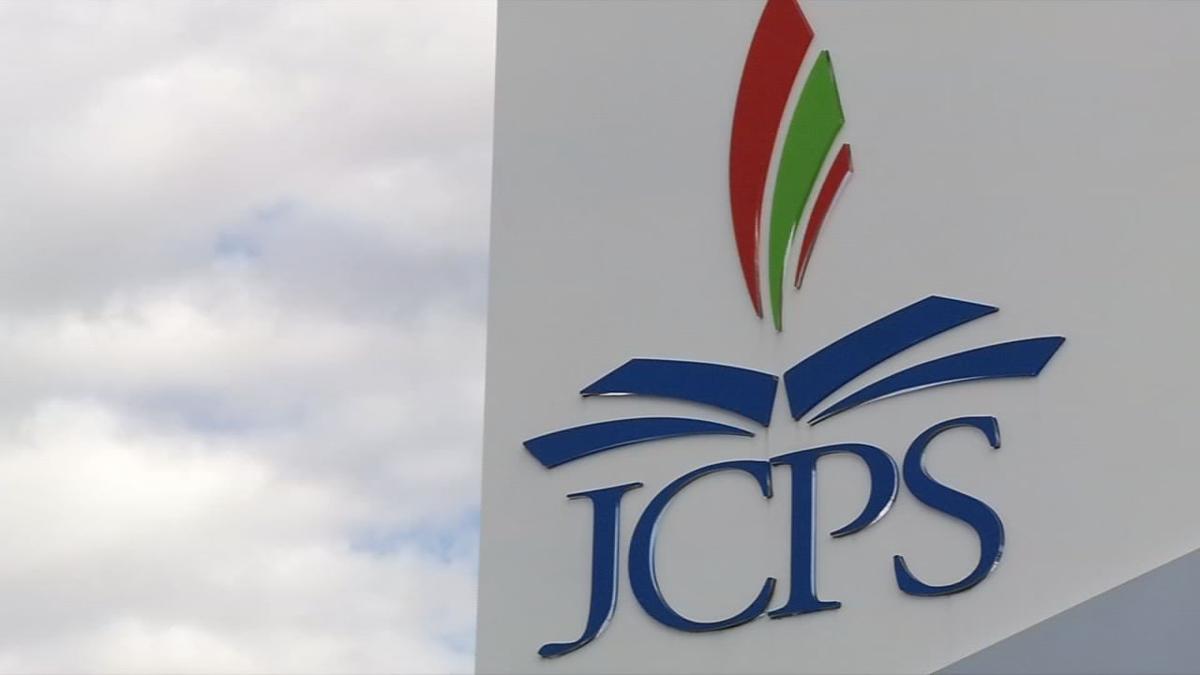 Crews work outside duPont Manual High School, which is undergoing a $35.3 million renovation that includes a new HVAC system.

LOUISVILLE, Ky. (WDRB) – The busiest construction season for Jefferson County Public Schools – the summer months when schools are mostly empty – may be winding to a close, but district officials are already taking a close look at how to improve facilities and build new ones.

With more than $1 billion in unmet facility needs and rapidly aging schools, the district is looking at every financing option available – including raising taxes – to pay for building projects. JCPS is empaneling an advisory committee to examine various revenue streams that the district can tap to fund improvements, according to Renee Murphy, the district’s communications director.

“It’s no secret that we have extensive facility needs, but the next steps to address this are being determined now,” she said in an email to WDRB News.

One financing possibility for the Jefferson County Board of Education is a recallable “nickel” tax that would equal about 5.6 cents for every $100 in assessed property value for local homeowners. That means a homeowner with a $100,000 house would pay an additional $56 in annual property taxes.

JCPS is one of more than 100 school districts across the state that don’t have a nickel tax, which can be defeated on the ballot if enough voters sign a petition challenging its adoption.

Chay Ritter, who works in the Kentucky Department of Education’s Office of Finance and Operations, told the school board during a work session last month that the tax could net JCPS about $38 million per year for facility improvements, a roughly 22 percent boost to its capital improvement revenue for the current fiscal year. Ritter also discussed the possibility of taxing utilities up to 3 percent, something 159 of Kentucky’s 173 school districts have enacted, as part of his presentation. That tax could also be challenged via petition.

The district’s facility needs have been well documented, including in a 14-month audit by the Kentucky Department of Education that led to Education Commissioner Wayne Lewis’s recommendation that the state assume management of its largest school district. KDE and JCPS agreed to a settlement that avoided a state takeover of the district, and the agreement calls for the school board to consider additional revenue sources “to address critical facility needs.”

Even without new funding, JCPS has ramped up spending on building renovations over the past year.

The school board has approved contracts worth more than $155 million to start renovation projects at facilities throughout the district since July 2018, some of which are funded through bond sales that will be paid back over time. That’s nearly twice the $79 million in construction contracts initiated in the previous year, according to board documents reviewed by WDRB News. Some of the projects approved over the last two years are holdovers from prior years in which construction didn’t begin.

The board also approved a new facilities plan in March that’s expected to cost at least $120 million. The plan involves building three new elementary schools and a new middle school plus major renovations at the Academy @ Shawnee that will open the school’s third floor for the first time in decades.

Contracts for those projects have not been awarded yet.

Chris Brady, who represents District 7 on the school board, wants to see the district focus on building more new schools rather than incurring extensive upgrades at older buildings.

“During my time on the board, we’ve only built one new school,” said Brady, who was first elected to the board in 2012. “We have about 150 buildings, so if we were to replace one building every year, it would take us 150 years to go through that process.”

Norton Commons Elementary, the most recent school built by JCPS that opened in 2016, cost the district $16.9 million in all, board documents show.

To garner support for increased taxes, Brady said he hopes JCPS develops a facilities plan that spells out exactly how the district intends to spend the new money on schools.

That would include architectural renderings of schools already in the construction pipeline and information on the types of schools that JCPS hopes to build, he said.

“I think all those things need to happen, and they need to be presented to the public to be able to make the case for improving our schools and to tell the public and show the public what we have in mind before we really start getting serious about implementing a nickel tax or exploring some other option for revenue,” Brady said.

If that’s the route the school board takes, Brady said he expects new taxes will be on the table next year. JCPS and other school districts typically set tax rates around August, leaving little time for such an effort this year, he said.

A public awareness campaign would help the district’s chances of clearing a ballot challenge to a new tax, said Eric Kennedy, director of advocacy for the Kentucky School Boards Association.

While many school tax initiatives have historically been turned back when put to voters, Henderson County Schools’s successful pursuit of a nickel tax is worth emulating, he said.

Thanks to what Kennedy called a “fantastic” public awareness campaign, the western Kentucky district successfully overcame a recall petition by just 157 votes in 2016. That endeavor included community forums, easily digestible talking points on the need for new tax revenue and short videos that showed the state of facilities in Henderson County, according to a KSBA profile of the district’s efforts to develop support for the nickel tax.

“From what we’ve seen in other districts over time, that is the exact sort of public engagement campaign that makes it more likely that the public support will be there for the tax increase,” Kennedy said.

Regardless of whether JCPS has a comprehensive facilities plan to sell to the public, at least one group has already said it will push back against any new taxes.

‘No amount is ever enough for the government’

Theresa Camoriano, president of the Louisville Tea Party, thinks JCPS has more than enough money to manage the district.

She estimated that millions of dollars could be saved by ending the practice of busing some JCPS students to schools far from their homes and by cutting costs in a “top-heavy” district administration.

“I have no doubt that some facilities need to be renovated or replaced,” Camoriano said. “New facilities probably need to be built, but that should all be incorporated into the money they've already got.”

“No amount is ever enough for the government,” she continued. “They always want more. I think what they need to realize is people can vote with their feet and do, and an awful lot of people have chosen not to live in Jefferson County because of JCPS, because of their policies, because of their taxes, so if we want to build a strong, vibrant community, everybody in government needs to work more efficiently.”

Even without a formal proposal under consideration, Camoriano said she believes the Louisville Tea Party will “do what we could to oppose” any new tax increase eligible for recall.

They’ll have an easier path to putting the issue before voters thanks to a law passed by the General Assembly this year.

House Bill 49, which passed by wide margins in the House and Senate, allows those pursuing recall petitions in Jefferson and Fayette counties to collect electronic signatures if they agree to cover any costs associated with the practice. Petitioners in the state’s two largest counties also get an extra five days – 50 instead of 45 – to collect signatures under the new law.

Opponents of the Fayette County tax hike couldn’t get enough signatures – at least 10 percent of the number of voters who voted in the most recent presidential election and live within the school district’s boundaries – to put the issue on the ballot last year.

Brady said he understands that any tax increases proposed by JCPS will likely face opposition, but he hopes a clear vision of how the money will be spent to improve local schools will prevail.

CORRECTION: A previous version of this story listed renovations at Butler High School, Youth Performing Arts School and Tully Elementary School as projects approved by the school board in the past year. Those projects were initiated prior to that and completed this year.