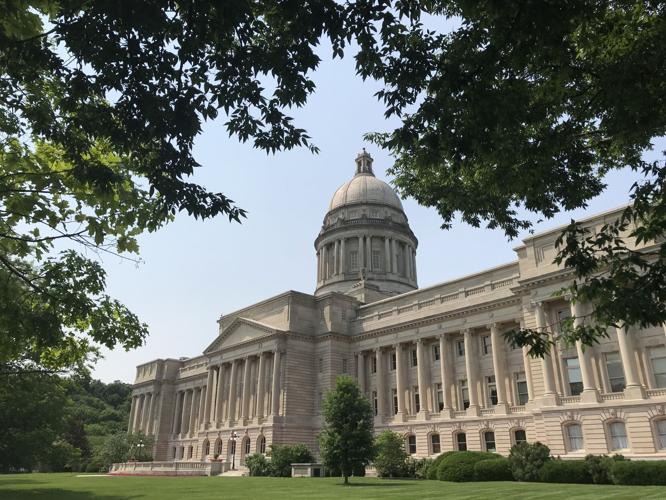 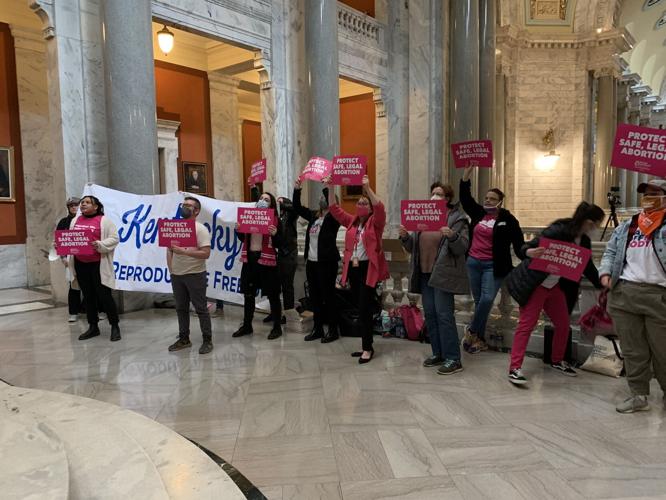 A group of pro-choice advocates protests outside the Kentucky Senate in opposition of a sweeping abortion bill on Tuesday, March 29, 2022. (WDRB photo)

FRANKFORT, Ky. (WDRB) -- Kentucky lawmakers are busy this week working to pass bills before the end of the current session.

The Senate chamber gaveled in at 1 p.m. Tuesday, and leadership alluded to a late night, maybe as long as midnight. The same could go for Wednesday.

Several bills were passed, and others remain without a vote after passing out of committee.

Here's a running outline of updates from Frankfort:

The Senate version revised the conditions to be met to trigger incremental drops in the state's personal income tax rate, which is now at 5%. The tax rate could drop by a half-percentage point at a time if the formula's targets were achieved. The first rate cut could come as soon as Jan. 1, 2023, said Senate Appropriations and Revenue Committee Chairman Chris McDaniel.

Over time, the bill could fundamentally change Kentucky’s tax code. Legislative leaders left about $1 billion unspent in the budget to cover changes in the tax code. The result was tax legislation aimed at gradually phasing out individual income taxes while extending the state sales tax to more services.

"It allows the working people of Kentucky to keep more of what they earn and more like our neighbor to the north, Indiana," said Rep. Damon Thayer, R-Georgetown.

Opponents decried a lack of debate and time to read the 134-page bill.

"Does this tax plan cut spending into the exact areas we need to be investing because of the revenue?" We don't know," said Sen. Morgan McGarvey, D-Louisville. "We haven't had a chance to properly vet or debate this bill."

The bill now heads back to the House for further action before being sent to the Democratic governor.

The charter school funding bill passed the Senate on a 22-14 vote Tuesday. The legislation allows charter schools to participate in the state’s Support Education Excellence in Kentucky program and directs school districts to transfer portions of their local tax receipts, federal funding, transportation money and other state-issued dollars to charter schools operating within their boundaries.

HB 9 also establishes a five-year pilot program with at least one charter school opening as an “urban academy” in Jefferson County and northern Kentucky. Urban academies prioritize enrollment of students who live close to the charter schools, according to HB 9.

HB 9 moves to Gov. Andy Beshear’s desk for his signature or veto. The governor has said he plans to veto the measure if it clears the legislature.

The legislation narrowly passed the state House on a 51-46 vote on March 22.

Abortion opponents added a proposed 15-week abortion ban to a bill regulating the dispensing of abortion pills, as Kentucky's legislature moved closer Tuesday to imposing its latest round of restrictions on the procedure.

The anti-abortion measure won Senate passage after a tense debate. Abortion-rights protesters chanted “abortion is health care” before being cleared from the Senate gallery. The bill returned to the House for a potential final vote.

At one point, pro-abortion advocates were removed from the gallery after repeatedly chanting "abortion is health care." Once outside the Senate chamber, they continued protesting in opposition of HB 3.

Pro-choice advocates chanting outside the Ky. Senate in opposition to HB3. @WDRBNews pic.twitter.com/O2GFO9HoA3

The proposal banning abortions after 15 weeks of pregnancy is modeled after a Mississippi law under review by the U.S. Supreme Court in a case that could dramatically limit abortion rights.

The 15-week abortion ban had been a stand-alone bill but Kentucky senators inserted it into the broader measure regulating abortion. The maneuver came as GOP lawmakers push to finish work on priority bills before starting an extended break this week.

By taking preemptive action, Kentucky’s stricter ban would be in place if the Mississippi law is upheld by the nation's high court, said Republican Sen. Max Wise.

The bill is on its way to Gov. Beshear's desk after the House concurred the Senate's final recommendation.

The bill, sponsored by Rep. Kevin Bratcher, R-Louisville, would require an armed school resource officer on every campus. Currently, under state law, schools are supposed to have an armed SRO at every school, if funding and personnel are available.

HB 63 aims to offer more guidance on the “School Safety and Resiliency Act,” and most Kentucky House representatives are on board. It states at least one school resource officer should be placed at each campus but also dictates that schools who can’t afford SROs, or don’t have enough qualified personnel, would need to meet with the state school marshal to come up with a plan to fulfill the goal as best as possible.

The proposed bill does not comply with the school safety plan JCPS approved earlier this year. JCPS plans to have one armed officer patrolling multiple schools all within close proximity. It would also have safety administrators, who would be unarmed individuals, working inside every school.

As of now, state law requires an armed SRO in every school if funding and personnel are available.

Among other things, HB 314 lets voters in unincorporated areas in Louisville outside the Urban Services District form new cities of at least 6,000 people if 66% of those living in the proposed city limits petition the Metro Council.

It also would require Louisville Metro Council to approve the new cities if they meet the bill’s thresholds. The version passed in the Senate on Tuesday with a 26-8 vote. New cities couldn't be created until July 15, 2024.

The bill would create a task force — the 15-member Louisville Metro Comprehensive Review Commission — to conduct a sweeping review of Metro government operations, including the relationship between merged city-county government and Jefferson County’s suburban cities/service districts.

Another provision would limit Louisville's mayor to two straight terms. Greg Fischer, the Democratic incumbent, is finishing his third term this year.

The bill mostly passed Tuesday along party lines in the Senate, moving it back to the House for consideration of the Senate's changes. Hours later the House approved those changes.

Two other bills under potential consideration Tuesday and Wednesday are House Bill 606, to legalize sports betting, and House Bill 136, which would legalize medical marijuana. As of 7 p.m., both have yet to to be heard on the Senate floor.

The final version of the Kentucky budget was announced Tuesday morning in a joint conference committee of leadership from both sides. It still needs final approval with a vote in both chambers. Gov. Andy Beshear's designated veto period begins Thursday. Then, lawmakers will come back for the very last two days, Wednesday and Thursday, April 13-14, and can override any vetoes.

If lawmakers pass any legislation April 13-14, there is no option to override a veto.