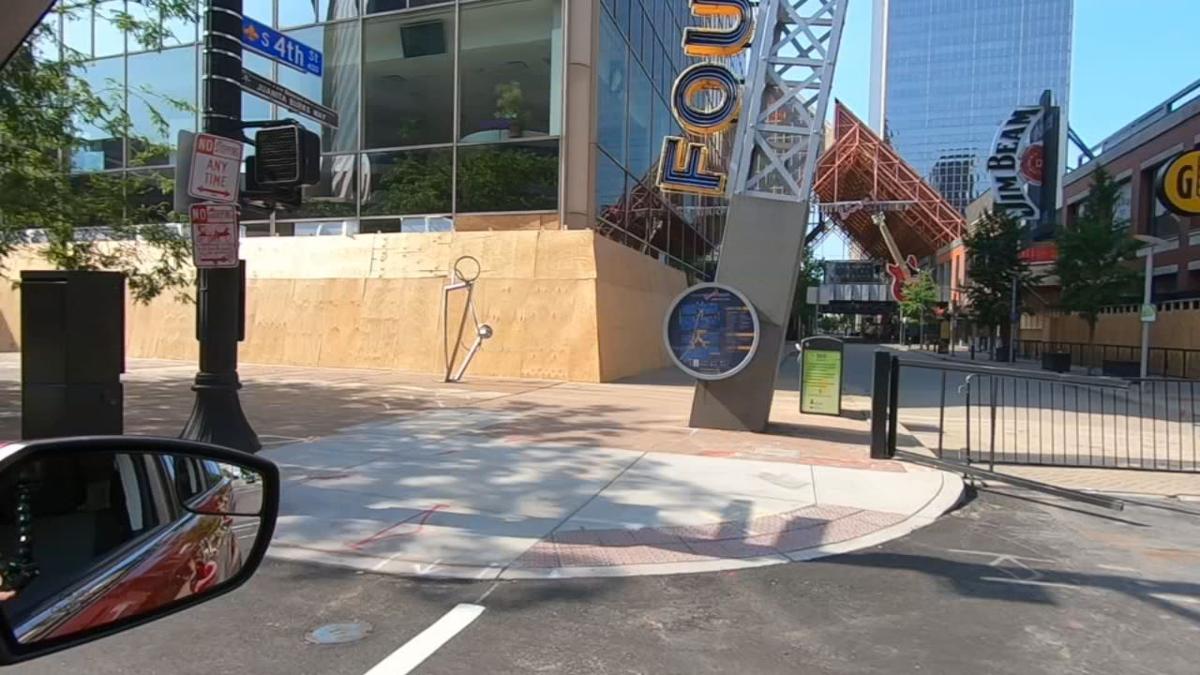 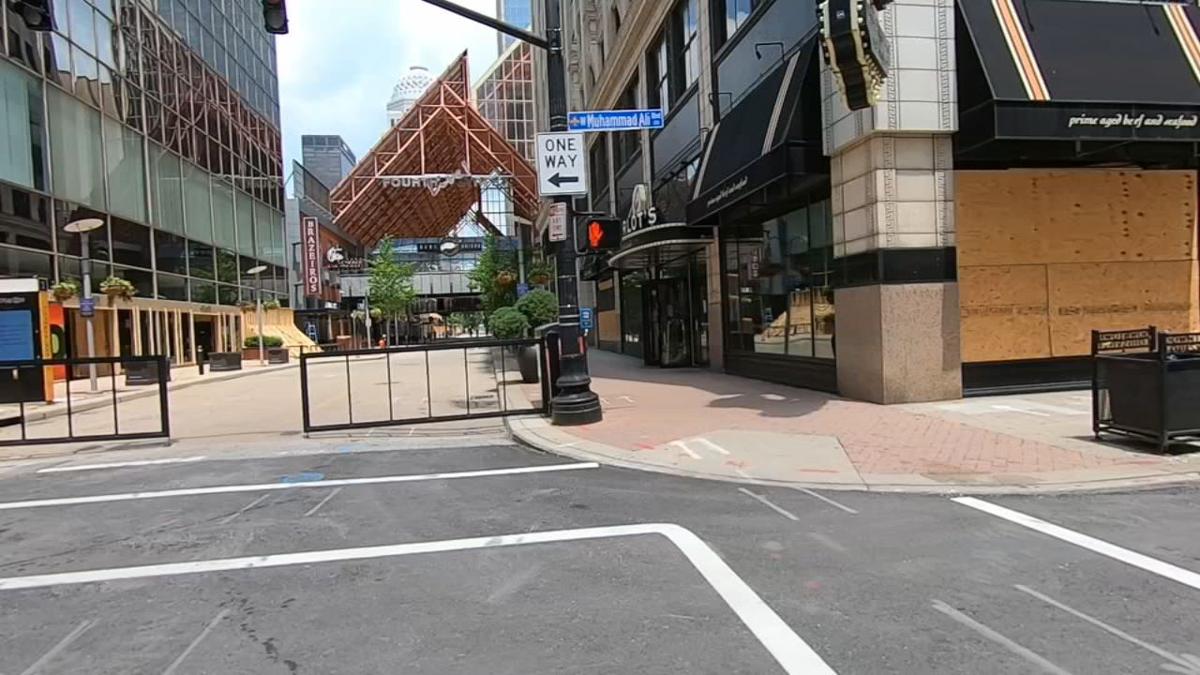 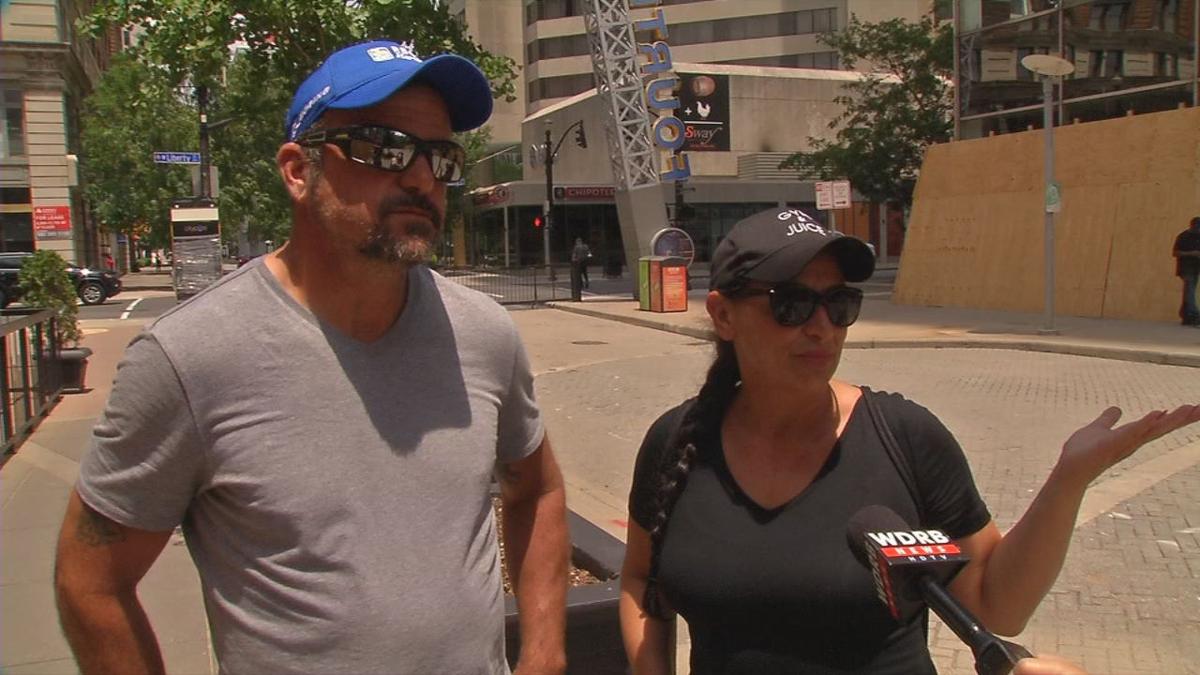 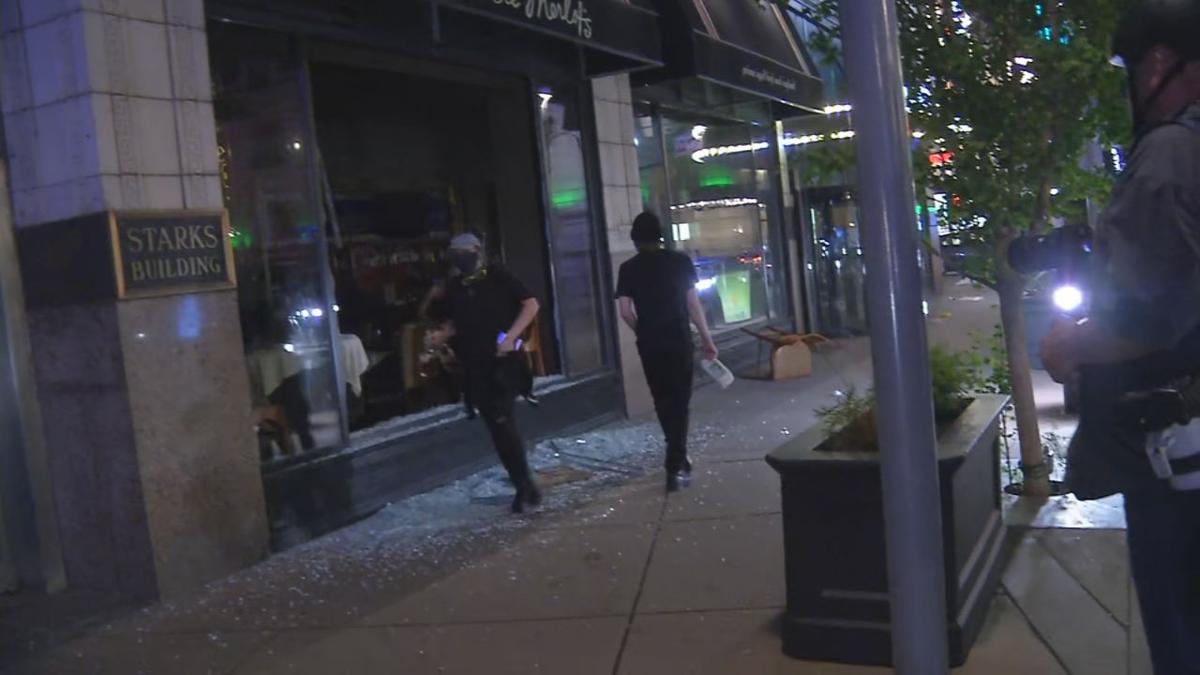 LOUISVILLE, Ky. (WDRB) -- It started as a peaceful protest. Then violent vandals and looters took over and shattered the peace of downtown Louisville.

Anyone who hasn't been to downtown Louisville in a while might not be able to recognize what's there now. Businesses are all boarded up. Some remain closed.

Kelly Williams and Brad Saul are from Kansas City and came to Louisville for a vacation. The damage was not what they expected.

"Actually it's my first time here," Williams said. "I'm actually really shocked at all the damage that is going on down here. It's really sad for the city."

"If I would have known it was like this, I don't think I would've come," Saul added.

Plywood abounds on Muhammad Ali Boulevard. Very few windows are visible. The Embassy Suites Hotel is all boarded up. The CVS has a sign saying it's open, but the the windows all have wood on them.

Fourth Street Live! used to be busy before the pandemic. Now it's virtually deserted. After looting and protests, several businesses closed and downtown looks empty.

"There's really not many open restaurants," Williams said. "We aren't able to see any of the local events around here. That's a little bit of dismay."

Stacy Roof with the Kentucky Restaurant Association says the unrest has had a dramatic effect on local eateries.

"It's tough because so many have damage, that makes some fearful to be open late at night or to go downtown," Roof said. "A lot of our childcare is just starting to come back. A lot of businesses aren't bustling downtown to make it make sense for the restaurants to be open."

KRA says restaurants were already having a hard time due to COVID-19, and ones without drive-thrus are reporting they won't make a profit this year.

There is one new development: a homeless camp along Jefferson Street, filled with garbage and clothes. It appeared in an area that had been recently cleaned by the city.

Tents are set up in Jefferson Square, with people hanging out there. Signs are on the ground, and there are a lot of flowers.

Along Broadway, there are more boarded up businesses, with some open, and others closed.

It's all a new reality for the face of Louisville -- a face that will be seen by tourists.

"I think that's what catches us the most, just how much damage has been done to your city," Williams said.

Some of the businesses haven't decided when they'll take down the plywood or open their stores.

GLI President and CEO Sarah Davasher-Wisdom writes, "Greater Louisville businesses are trying their best to keep their doors open with a high regard to safety, but we need support from government and public safety officials to help put us on a strong path to sustained recovery.

The Greater Louisville region continues to grapple with the uncertainty related to this global pandemic. As businesses and families continue to find ways to live and work through COVID-19, we know there are many concerns for public health and safety that impact the decisions we are experiencing in the community.

GLI also recognizes there is a lot of pain and deep emotions felt by the community as we pursue meaningful reforms to address racial inequities. During this pursuit of justice and healing, we know continuous actions must be taken to allow for peaceful demonstrations, while also preventing the destruction of property and interruption of business operations. GLI urges government leaders to continue to assess Louisville’s safety for all and take measured actions to thwart criminal behavior and violence."