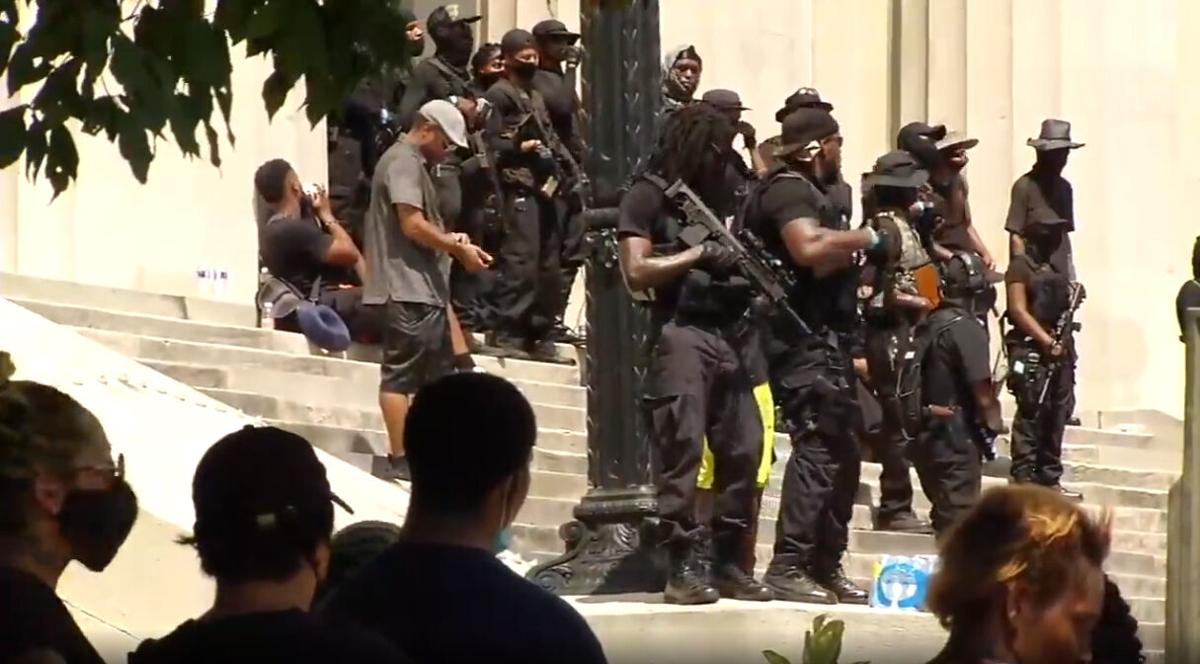 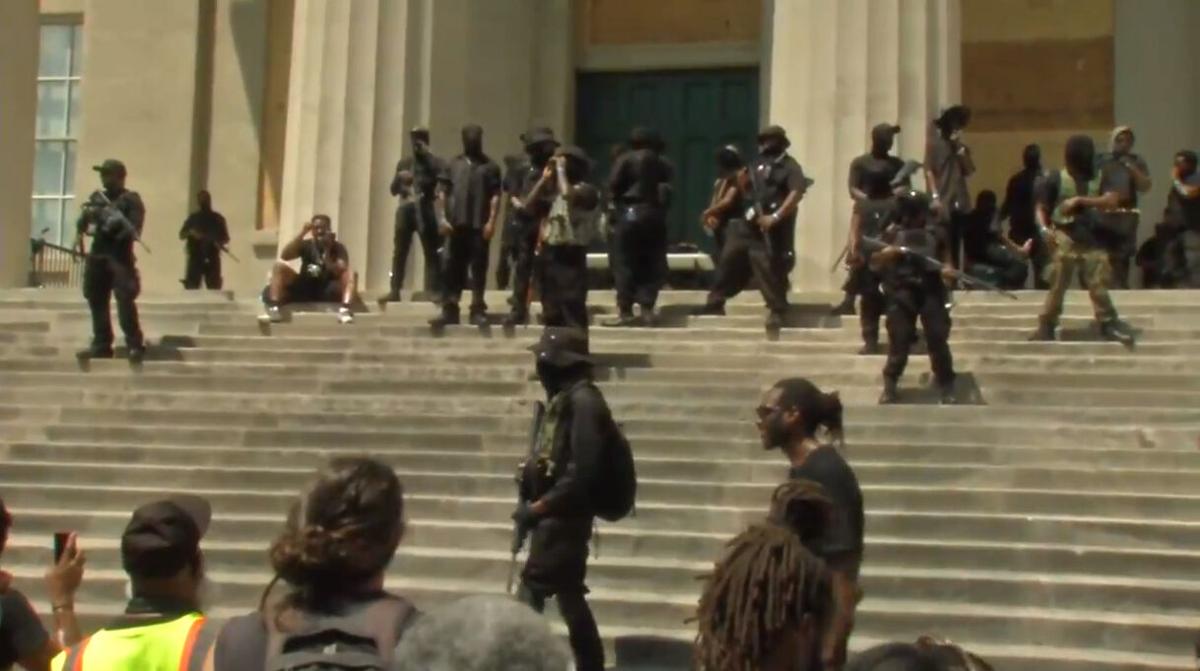 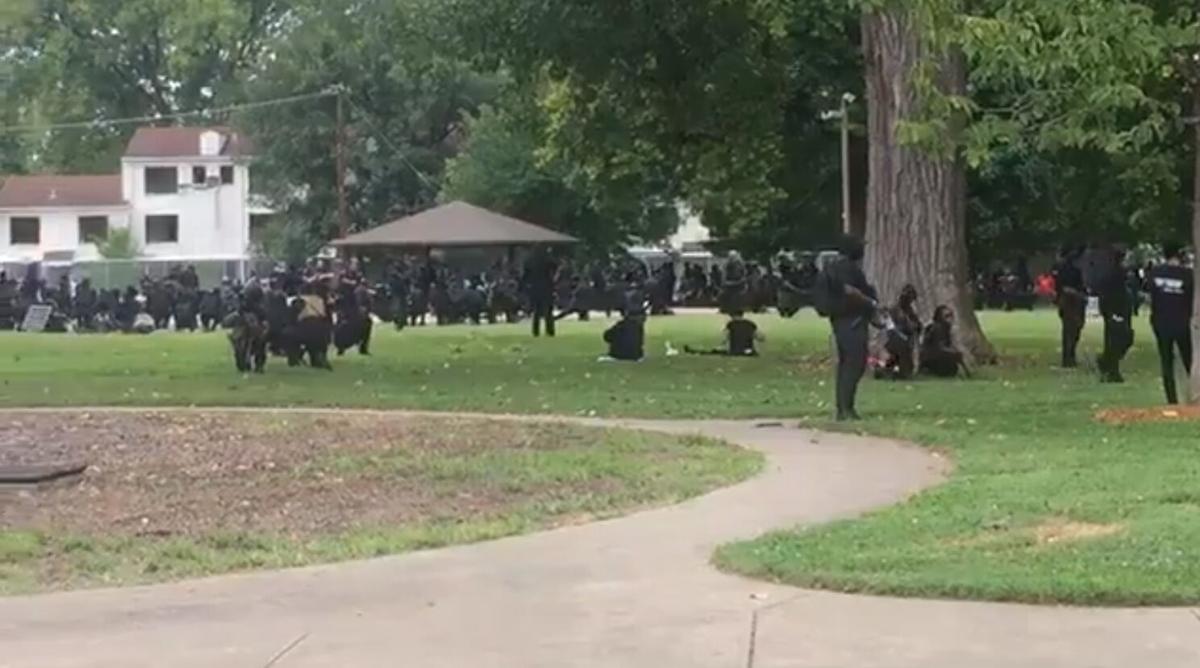 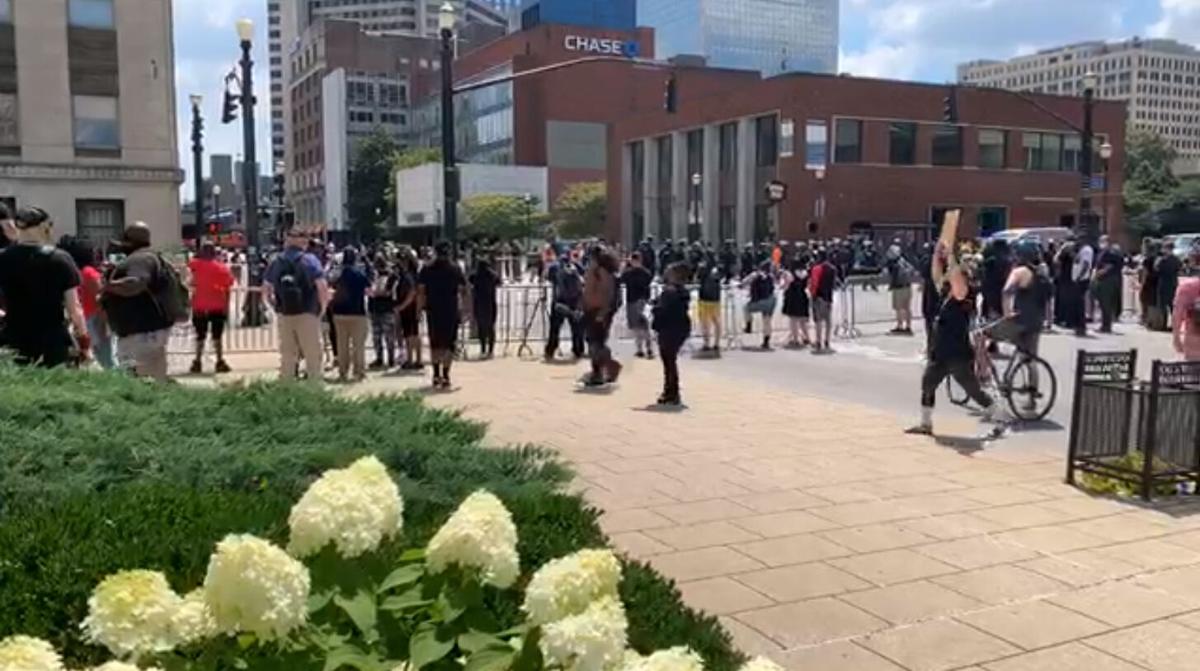 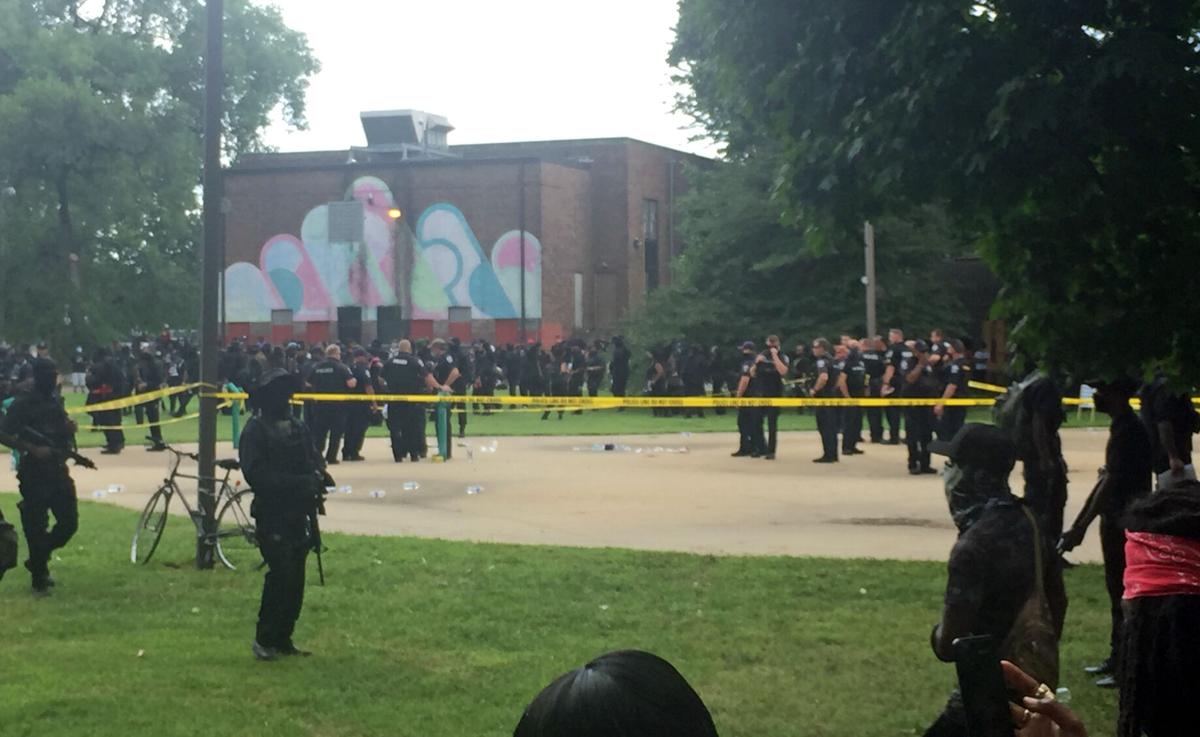 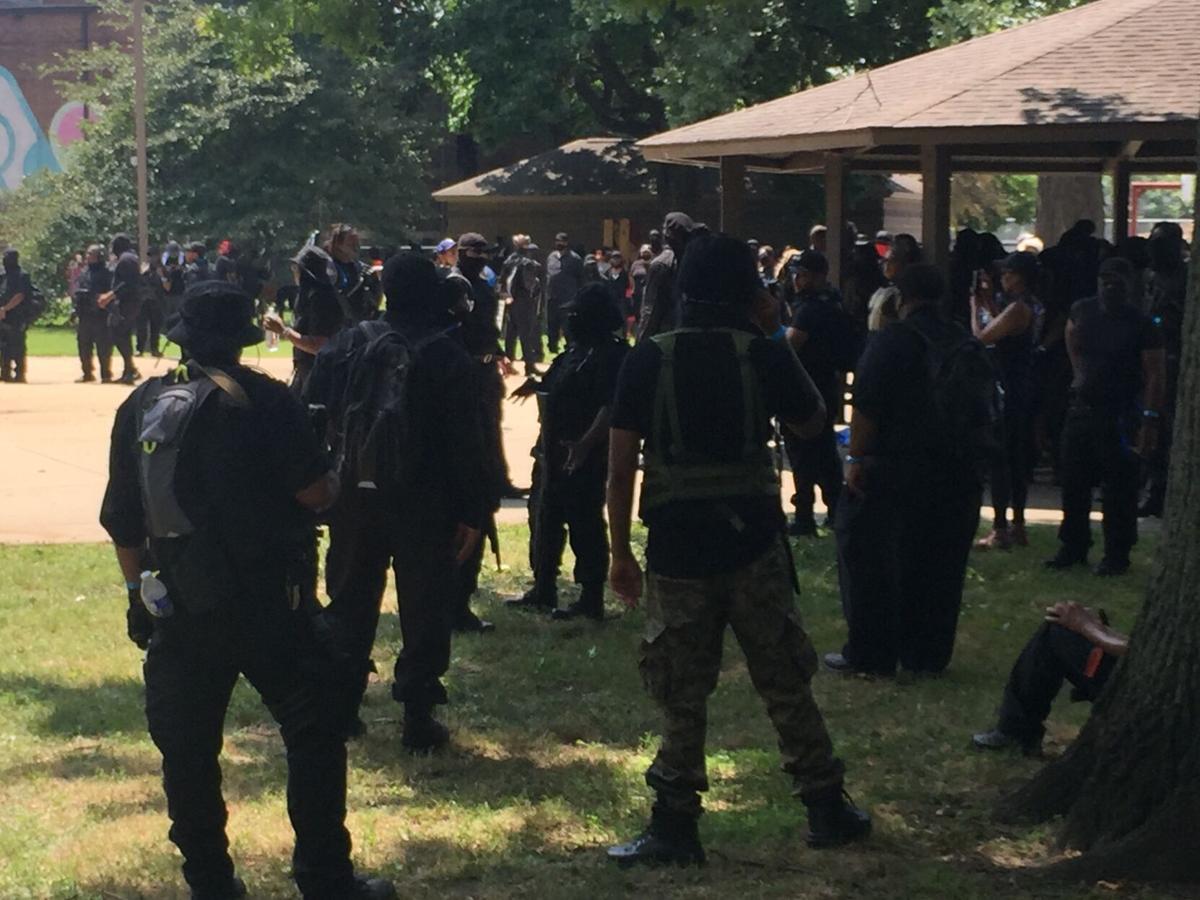 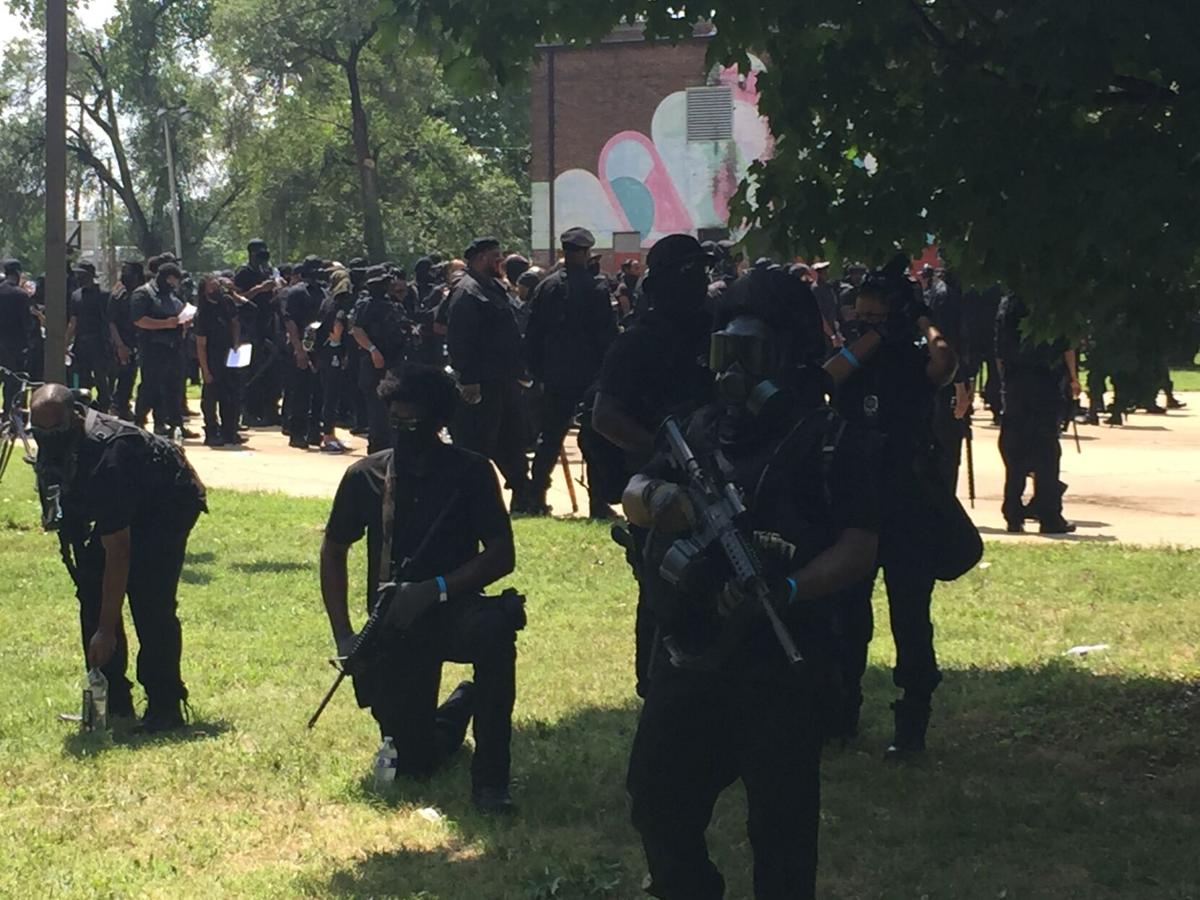 LOUISVILLE, Ky. (WDRB) -- The leader of a Black militia group says when Attorney General Daniel Cameron told him it would be four months before his investigation into the Breonna Taylor case would be completed, he had one response.

The comments came from Grand Master Jay, leader of the NFAC, the "Not F****ing Around Coalition, to about 350 armed militia members in downtown Louisville Saturday.

Standing on the steps of Metro Hall, Grand Master Jay said he was told Louisville Mayor Greg Fischer only gave the full case to Cameron last week, and that Cameron told him in a phone call that the case file was sorely lacking in documents.

"There was no crime scene," Grand Master Jay told the group. "There was no report. There was no ballistics. There was no blood and toxicology. Matter of fact, there wasn't nothing. So when they gave it to the AG, and he said, 'Where's the case?' The mayor said, 'I gave you enough. Do your job.'"

"And they thought that [EXPLETIVE] was gonna go away," Grand Master Jay told the group. "But you mother-[EXPLETIVE]s ain’t stupid."

He said he asked Cameron on the phone if he would arrest the officers, and he says Cameron responded with, "I'm going to do what I need to do."

In response, the militia leader told the group that he issued an ultimatum to Cameron, telling him he had four weeks to finish the investigation. He also promised that the NFAC would return to Louisville.

"Four weeks from today, we gonna come back here, and we should have an answer," he said.

In a statement on Saturday evening, Cameron's office confirmed that the attorney general did speak with Grand Master Jay by phone, but denied making any statements about a timeline.

"As was confirmed earlier this week, the conversation between Grand Master Jay, Metro Council President David James and the Attorney General was productive," the statement read. "The Attorney General reiterated his commitment to a thorough and independent investigation into the death of Ms. Taylor, but he did not comment on any specifics related to the timeline of the investigation."

Cameron also tweeted a statement about the ongoing protests Saturday afternoon urging that the focus of the demonstrations be "the desire for truth," not violence.

"Those who are gathering in Louisville today to protest, we understand the desire for truth and ask that to be the focus of demonstrations, not violence. We continue to work diligently in pursuit of the truth by conducting an independent investigation into the death of Ms. Taylor."

Those three people, all of whom were NFAC members, were taken to the hospital with injuries that were not believed to be life threatening, according to Schroeder.

"This is a tragic situation that could have been much worse," Chief Schroeder said, in a statement. "I encourage anyone choosing to exercise their Second Amendment rights to do so responsibly."

EDITOR'S NOTE: The below video contains raw video of the moment a shot rang out in Baxter Park. Please be aware that raw video sometimes contains explicit language.

"It has been a tension-filled day for all of us," said Deputy Chief LaVita Chavous.

She also encouraged protesters, "to choose peace, and not violence, to continue to exercise your right to protest, but do it lawfully."

She added that, despite "rumors on social media and the news that make people afraid for your safety," the LMPD remains committed "to protect all of you."

Organizers of the NFAC say the group shows up when the Black community doesn't get answers regarding cases like the fatal police shooting of Breonna Taylor. The group said earlier this week it planned to openly carry weapons and urged members to show up wearing all black, to carry semi-automatic weapons and to be peaceful.

But not everyone in the Jefferson Square area was there to rally behind the NFAC's message. Another armed group of protesters were nearby, saying they were there to "keep the peace."

Jeffery Reece, a veteran and a member of a group that calls themselves the Three Percenters, said he was there to protect the police.

"We didn't want our law enforcement officers getting overrun," he said. "And that is what we told them. We're like, 'Look, just tell us what you need. We're here.'"

About three-dozen of members of the group were stationed on the other side of a barricade. They also had guns on full display, and many were dressed in camouflage gear and were former marines and veterans.

Some were not part of the group but just wanted to show patriotism for the city.

The intersection of South 5th Street and West Jefferson Street was a buffer zone, with LMPD stationed in the middle to keep the two groups apart from each other.

They said their goal is to get people back to caring for each other and for the country they live in.

"All vets really want to just keep the peace," said one group member who identified himself as "Preacher." "People fight for the United States -- it's not for just any one group. Everyone in the United States deserves the same thing, and that is why we are here."

Despite some brief arguments both sides remained peaceful.

Sgt. Lamont Washington says LMPD made eleven arrests on Saturday during the demonstrations for charges such as disorderly conduct and obstructing a highway.

As the night went on, protesters marched from Jefferson Square Park to Lynn Family Stadium. At the stadium, some of the protesters forced entry into one of the stadium gates, according to Sgt. Washington.

Protesters then went to the Big Four Bridge, where they used vehicles to block the roadway and drive in the wrong direction. Sgt. Washington says protesters on foot began to throw bottles at police. Three of the protesters were arrested and charged with interfering with a government operation, fleeing and evading, wanton endangerment and obstructing a roadway. After being given orders to disperse, protesters returned to Jefferson Square Park.

Those who are gathering in Louisville today to protest, we understand the desire for truth & ask that to be the focus of demonstrations, not violence. We continue to work diligently in pursuit of the truth by conducting an independent investigation into the death of Ms. Taylor.

On Friday afternoon, Metro Councilman Kevin Kramer, R-11, and other council members had urged residents to stay away from the downtown Louisville area on Saturday.