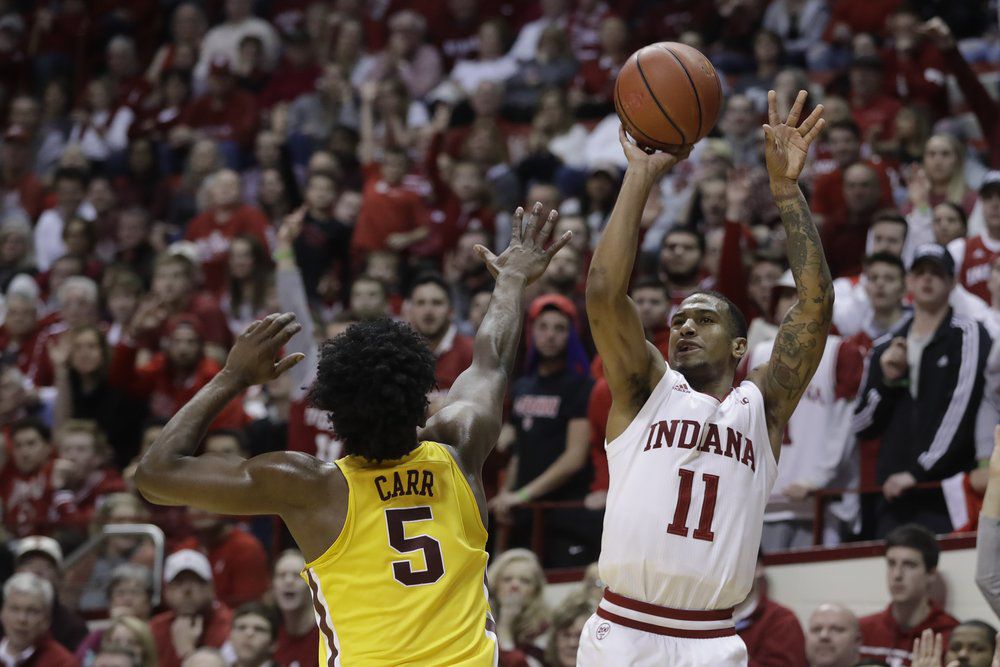 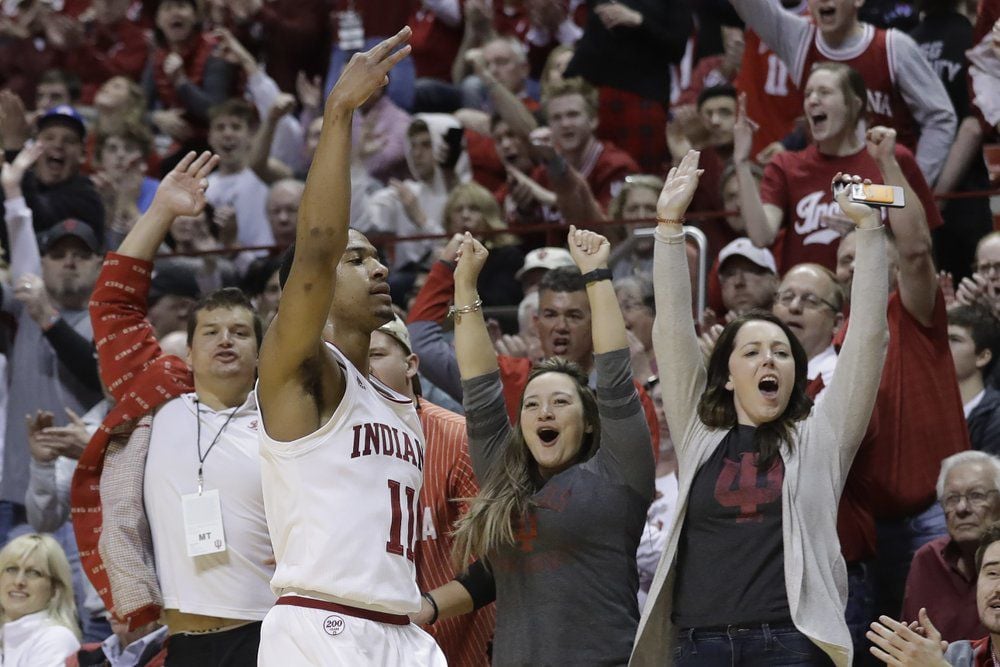 Indiana's Devonte Green (11) reacts after hitting a 3-point shot during the first half of the team's NCAA college basketball game against Minnesota, Wednesday, March 4, 2020, in Bloomington, Ind. (AP Photo/Darron Cummings) 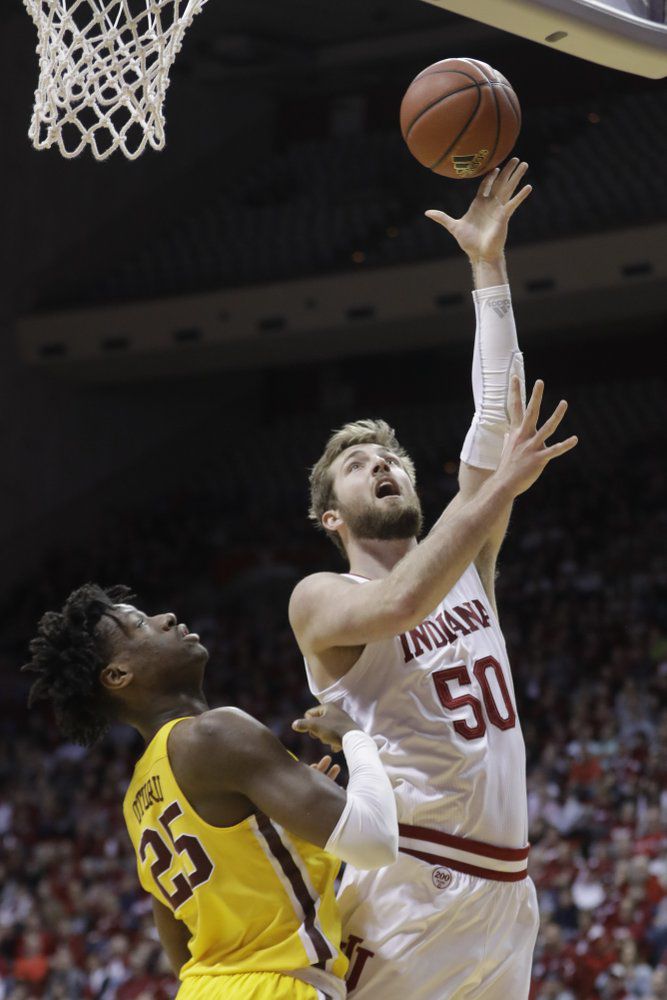 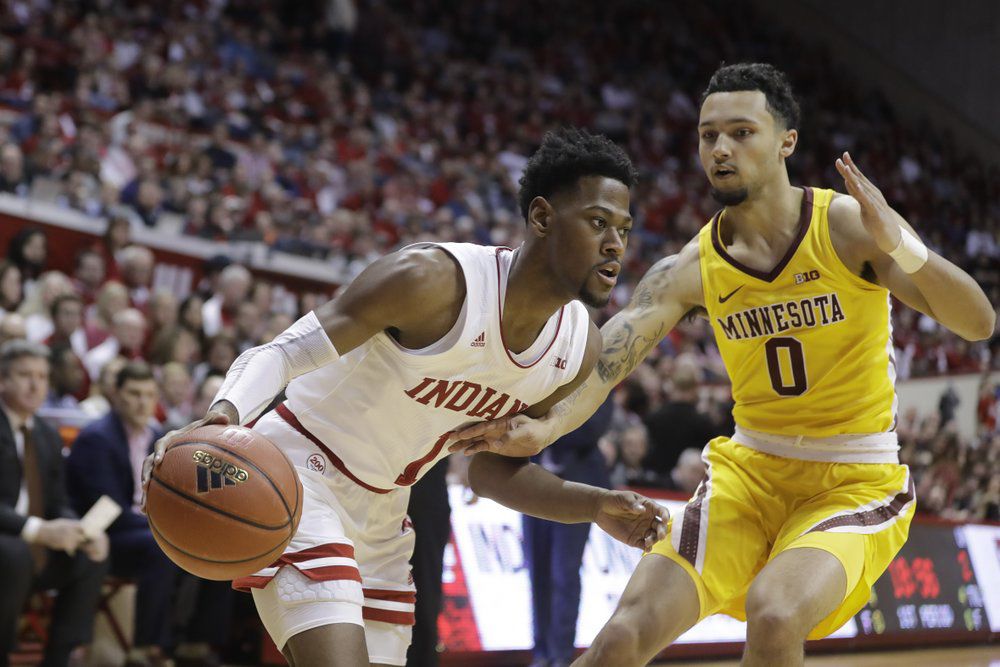 Indiana's Al Durham (1) goes to the basket against Minnesota's Payton Willis (0) during the first half of an NCAA college basketball game Wednesday, March 4, 2020, in Bloomington, Ind. (AP Photo/Darron Cummings) 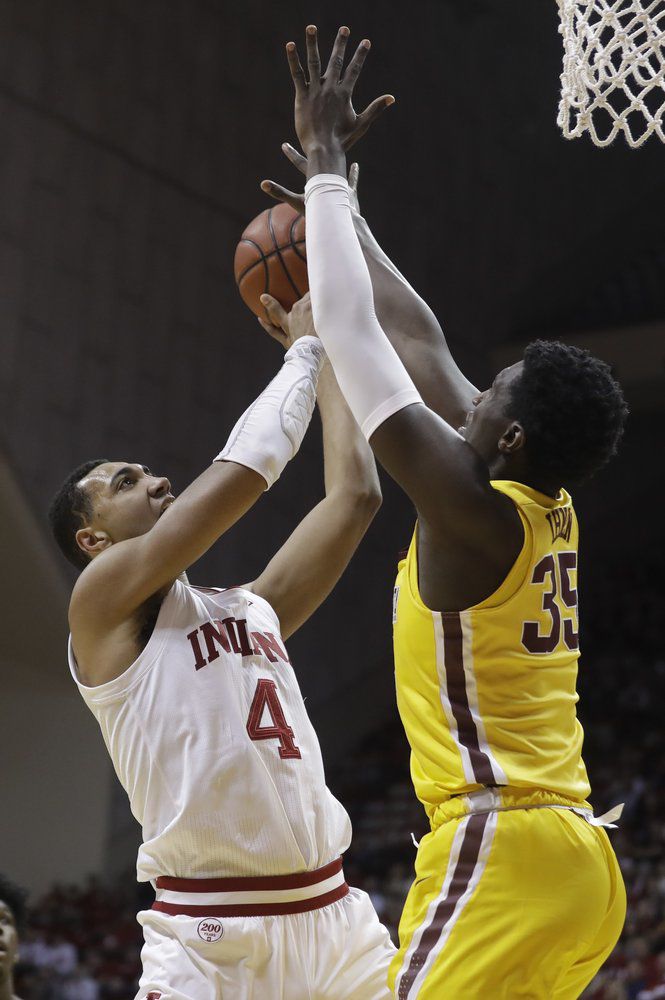 Indiana's Devonte Green (11) reacts after hitting a 3-point shot during the first half of the team's NCAA college basketball game against Minnesota, Wednesday, March 4, 2020, in Bloomington, Ind. (AP Photo/Darron Cummings)

Indiana's Al Durham (1) goes to the basket against Minnesota's Payton Willis (0) during the first half of an NCAA college basketball game Wednesday, March 4, 2020, in Bloomington, Ind. (AP Photo/Darron Cummings)

Man, that’s a tired phrase. It’s especially tired at Indiana because this was the Hoosiers’ 30th must-win game this season.

Every game is a must win when a basketball program is working to avoid a cold seat on the sidelines for the NCAA Tournament for the fourth consecutive season for the first time since 1972.

Two weeks ago, critics howled for Miller to pull Joey Brunk from the starting lineup and replace him with Race Thompson.

Brunk had not scored double figures since Jan. 23, a stretch of 10 consecutive games. He failed to score against Minnesota the last time the teams played and backed it up with another blank against Penn State. He huffed and puffed for six total points in IU's last four games.

Thompson had more energy, bounce and a better nose for the ball. Brunk is a redshirt junior, a transfer from Butler. Thompson has been in the program three seasons and has two more years of eligibility. He's the future.

Critics will need a different punching bag the rest of this season. Miller said that he had no plans to remove Brunk from the lineup. Check video of Indiana's 72-67 victory over Minnesota for an explanation.

Brunk scored 10 of his 12 points in the second half and led a defensive effort that frustrated Minnesota big man Daniel Oturu as the Hoosiers won a game on a night when a loss would have been intolerable.

"I think the whole key to the game was Joey Brunk," Miller said. "I thought our bigs did a really good job."

So Miller has no plans to remove Brunk and his 7 points and 5 rebounds from the lineup? Or anybody else?

"Here is the deal," Miller said. "You're in March. If you change your starting lineup, you change your starting lineup with a specific reason or a specific adjustment. I'll tell you this much, the minute you change, you lose guys. There's no reason to do that. Part of it is I think what Joey did tonight, you hang in there, hang in there. It's not easy to play well every night, but it's easy to play hard every night. I think Joe played extremely hard tonight.

"I also think Trayce (Jackson-Davis), we weren't sure if Trayce was going to play tonight, he's a little banged up (with a tender ankle). Had guys ready to roll on that one.

"We've been doing it all year by committee. It's not like our starters always play well or this guy and that guy play well. We have games where Devonte (Green) is coming off the bench, he's killing people.

"Tonight I really thought Rob and Al (Durham) played a solid game. Devonte did as well, especially with his assists. I'm pleased with our group. I was really, really happy for Joey to kind of get going offensively again. We need that. We need that."

Brunk was one of five Hoosiers in double figures -- the five starters. Trayce Jackson-Davis led IU with 18 points. Point guard Rob Phinisee is playing his best basketball. Although Phinisee only had 11 points, Wednesday marked the first time this season he has scored in double figures in consecutive games.

Although Oturu led Minnesota with 24 points, he needed 27 field-goal attempts to get his 11 baskets. He missed a jarring number of shots from three feet or less. Credit Brunk who defended him with the I Refuse To Retreat approach that Big Ten officials allow.

"Just got to stick with it regardless of what is going on," Brunk said. "Continuing to lead in practice, have energy, keep plugging away."

The victory bumped Indiana’s record to 19-11 and 9-10 in the Big Ten. The Hoosiers were either a No. 10 or No. 9 seed on most NCAA brackets prior to the game. Beating Minnesota for the second time in two weeks should enable them to hold the spot. One more victory should sound the all clear.

"We don't really focus on it," Phinisee. "We focus on day by day, winning the practice. Really we just want to tomorrow get after it in practice and do what we can so we can beat Wisconsin."

If this also reads like a distant replay of last season, it is. The Hoosiers missed the 2019 NCAA Tournament because they lost 12 of 13 conference games until a late-February surge. A first-round defeat to Ohio State in the Big Ten Tournament put the Buckeyes, not Miller’s team, in the NCAA Tournament.

The Hoosiers made this one a struggle. They opened with energy and efficiency, surging to a 10-point lead that stirred a response from the crowd.

Then, that energy waned. Minnesota’s persistent defense was a factor. So was the Gophers’ shooting from distance. When IU won at Minnesota two weeks ago, Richard Pitino’s team made only four of 25 shots from distance.

On Wednesday, Minnesota made four 3-point field goals (in nine attempts) in the first half, pushing into a 34-32 halftime lead when Isaih Ihnen converted from the right corner with seven seconds to play.

Defense enabled Indiana to steady in the second half. The Gophers suffered five missed shots and two turnovers as IU moved ahead 40-34, forcing Pitino to request a timeout.

You don’t have to need to be a basketball guru to diagnose several critical issues with this IU team. The guard play is ordinary. The shooting is inconsistent. IU shot 3 of 15 from distance and 9 of 17 from the free-throw line.

Senior Day is the only game remaining on the Hoosiers’ schedule. Indiana opened Big Ten play by losing at Wisconsin by 20. They will close conference play against the Badgers in a game they cannot afford to lose by 20 — or 2.

Go ahead and call it a must win — the 31st of the season.

After long wait, Louisville's 'hot rod haven' will be fixed