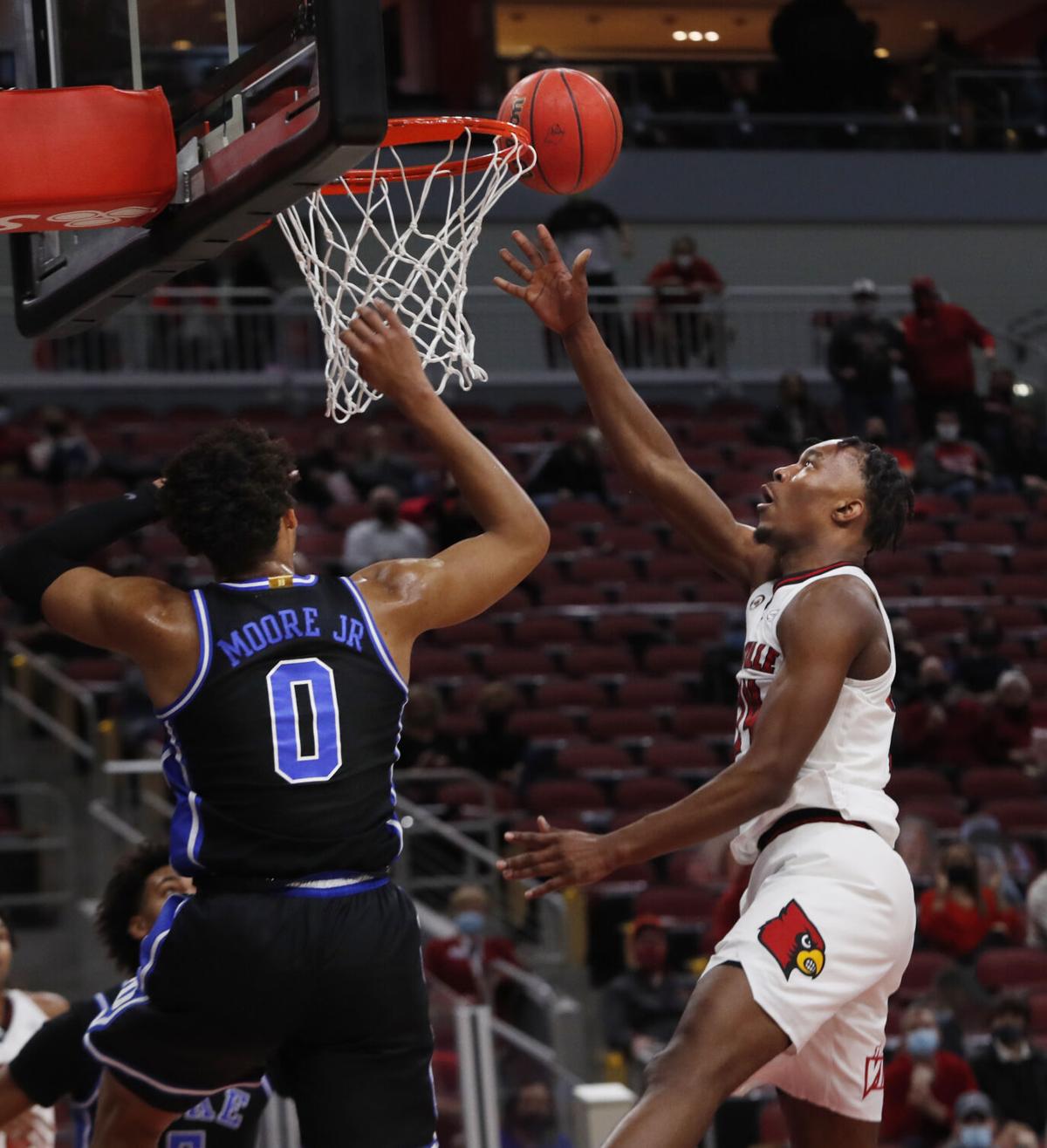 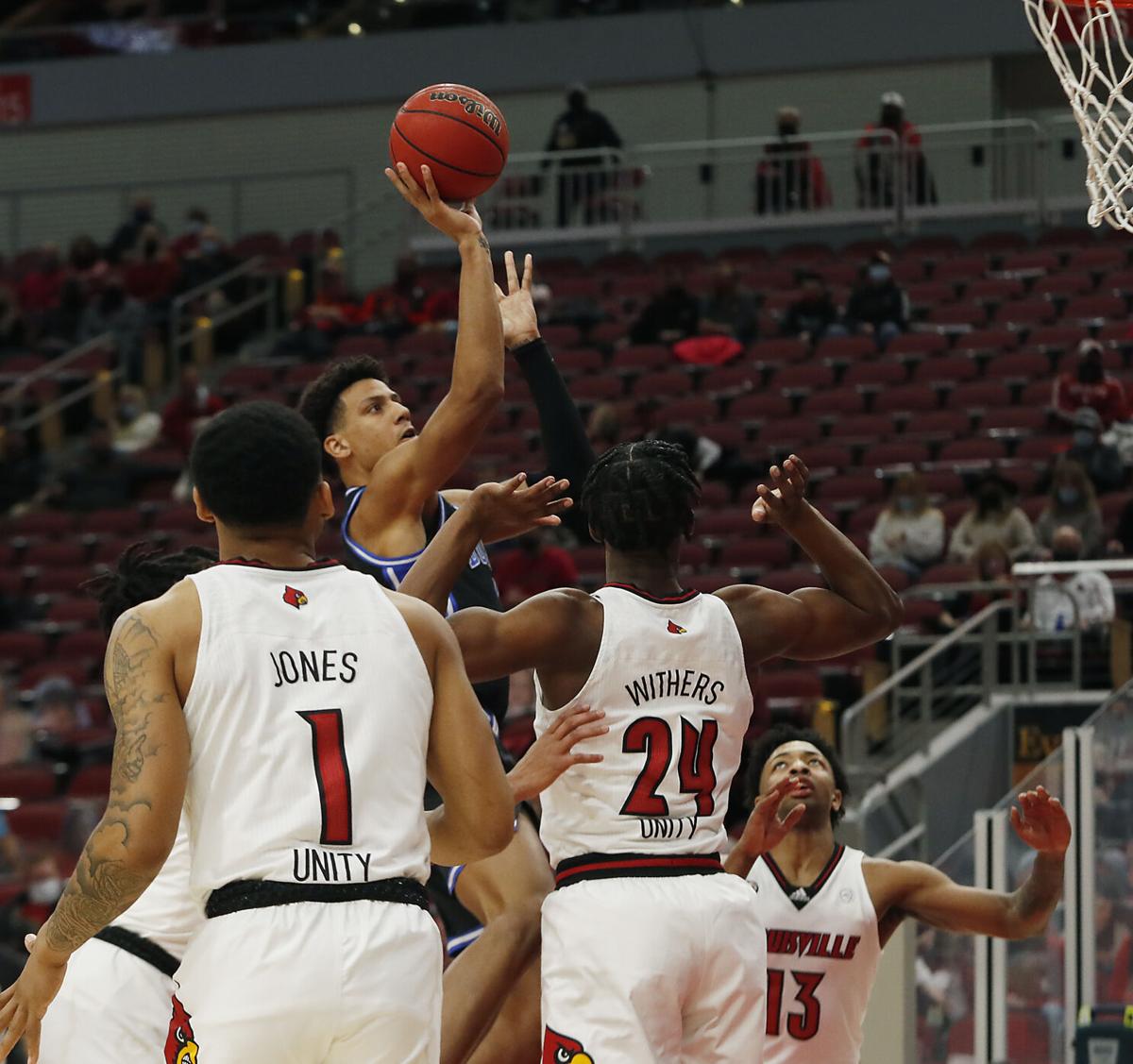 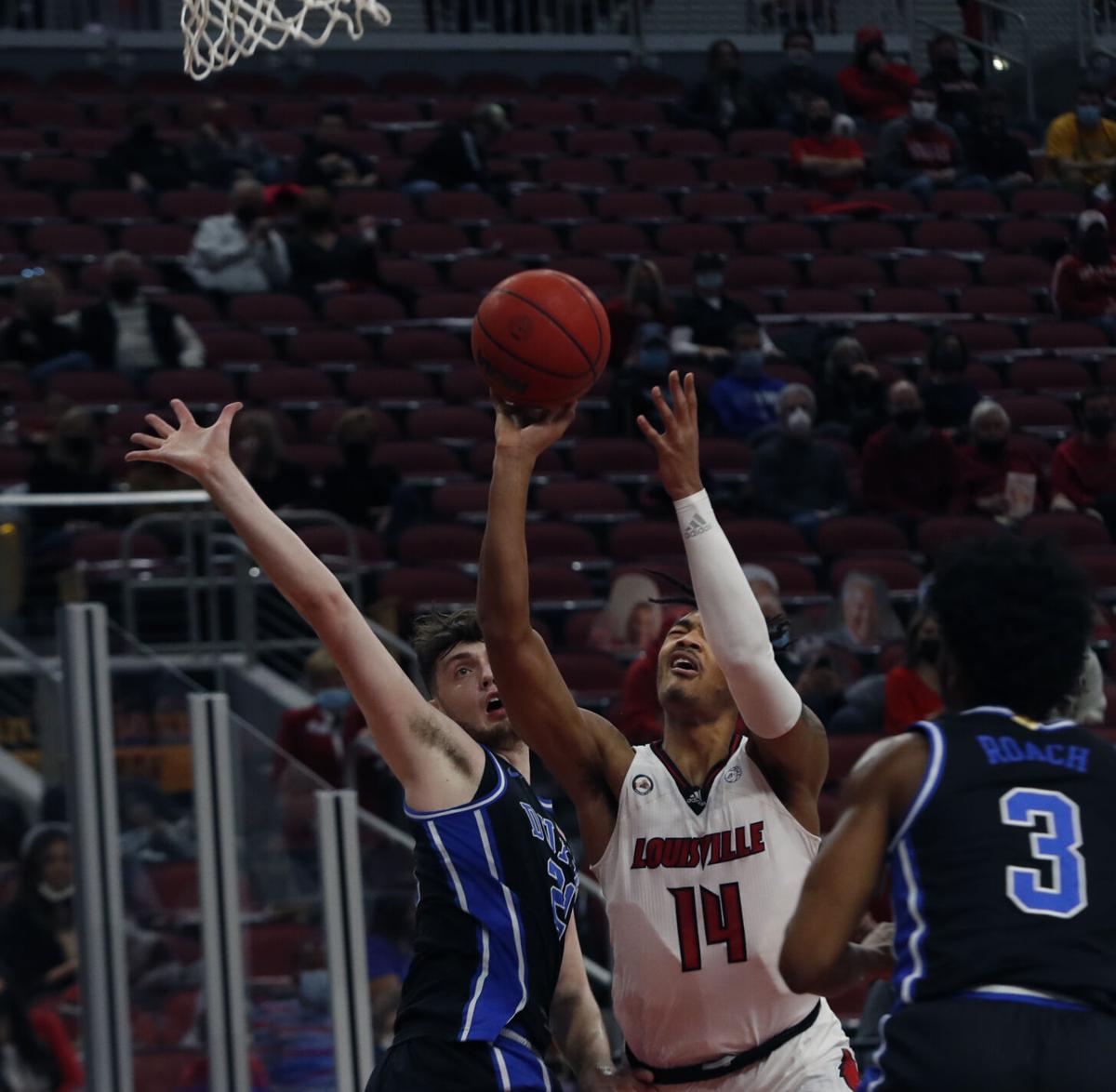 LOUISVILLE, Ky. (WDRB) — Duke is not the team you have to go through to win the Atlantic Coast Conference men’s basketball championship this season.

No, sir. If the NCAA Tournament field was picked Sunday, the Blue Devils would be making plans for the NIT.

No NBA-ready guards. No quality wins. No depth. Not even a winning record.

Coach Mike Krzyzewski has one star — forward Matthew Hurt. He might be the ACC Player of the Year. He looked the part Saturday.

Louisville coach Chris Mack also has a guy projected to be taken in the first round of the 2021 NBA Draft — guard David Johnson. If scouts watched Louisville defeat Duke, 70-65, Saturday afternoon at the KFC Yum! Center, they saw Johnson deliver a defensive performance that ensured Duke, not U of L, would exit with a three-game losing streak.

Hurt scored 24 points for the Blue Devils. Look closer at the numbers. Hurt scored 4 in the final 18 minutes. Johnson's defense turned him into a footnote, and Louisville's balanced offense (four guys scored at least 11 points) was better than Hurt's supporting cast.

Credit Johnson, a sophomore from Trinity High School. At 6 feet, 5 inches and 210 pounds, Johnson is 4 inches shorter and 25 pounds lighter than Hurt. No problem. One reason NBA guys love Johnson is that he can defend guys who are smaller or larger, point guards or post players.

It didn't matter over the final 18 minutes Saturday. Hurt made a 3-pointer to push Duke ahead, 40-37, less than two minutes into the second half. At that point, Hurt was 4 for 4 from distance and 8 of 10 overall. He scored half of Duke's points.

That's when Mack decided that, if Louisville was going to win, Johnson would have to stop — or at least slow — Hurt.

"Hurt was really hurting us, ironically, with his perimeter game," Mack said. "We felt David would not get overpowered on the box and Hurt would have no real advantage on the perimeter."

"I know he was killing us when he got the ball near the basket," Johnson said. "I was going to work my butt off to keep him from getting the ball."

Hurt went nearly 10 minutes without a field goal attempt. He did not score a field goal for more than 13 minutes. He finished with one more basket and two free throws.

"You've got to stay low in a stance and just be ready and alert," Johnson said.

"I don't know how many times he touched the ball in the post (after Johnson took over)," Mack said. "It couldn't have been more than one or two times."

Jones helped, too. It was his drive with 1:50 to play that sent Hurt to the bench with his fifth foul. Jones made two free throws to put Louisville ahead, 64-63.

Jones led the Cardinals with 24 points, including the team's final 9. His layup pushed Louisville ahead, 66-65, with 1:18 to play. Duke missed four 3-point field goal attempts in the final 33 seconds.

The 65 points were the fewest that Duke has scored since the Blue Devils managed only 50 against Virginia on Feb. 29, 2020.

Unless the ACC makes some impromptu scheduling changes, Louisville has six days off until the Cardinals play again. They are booked to play Boston College, the second-worst team in the league, on Jan. 30 at the KFC Yum! Center. Louisville won by 12 on Jan. 2 at BC.