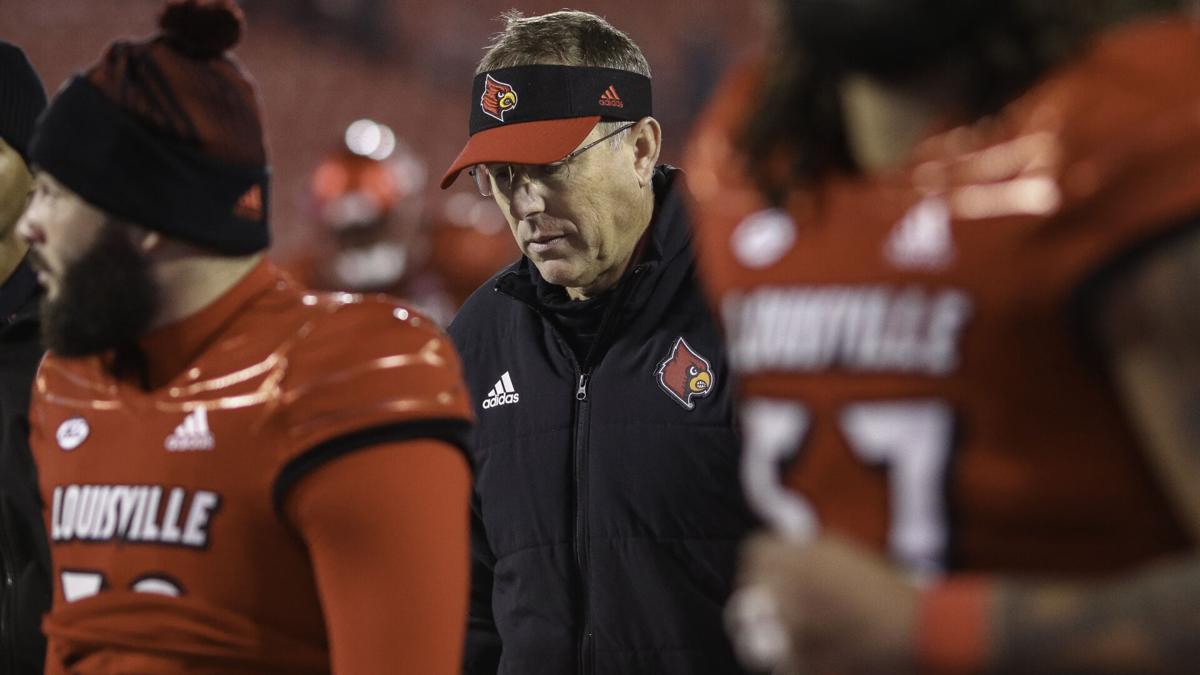 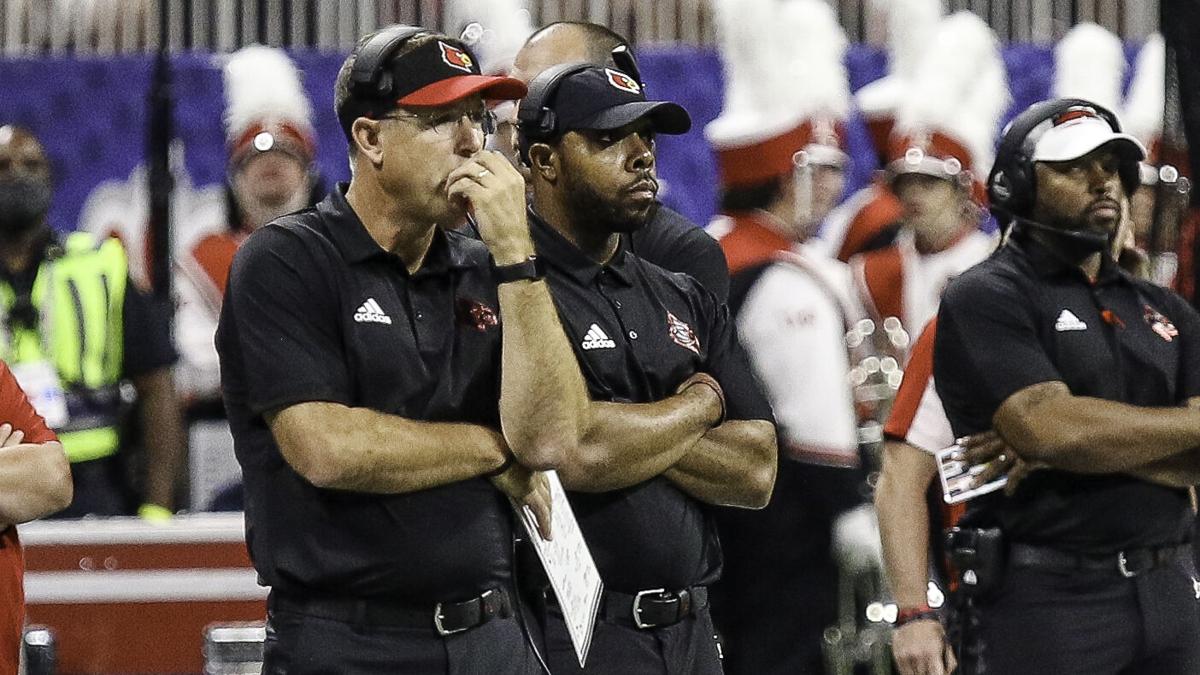 Scott Satterfield's Louisville team has lost three times in the past four games. 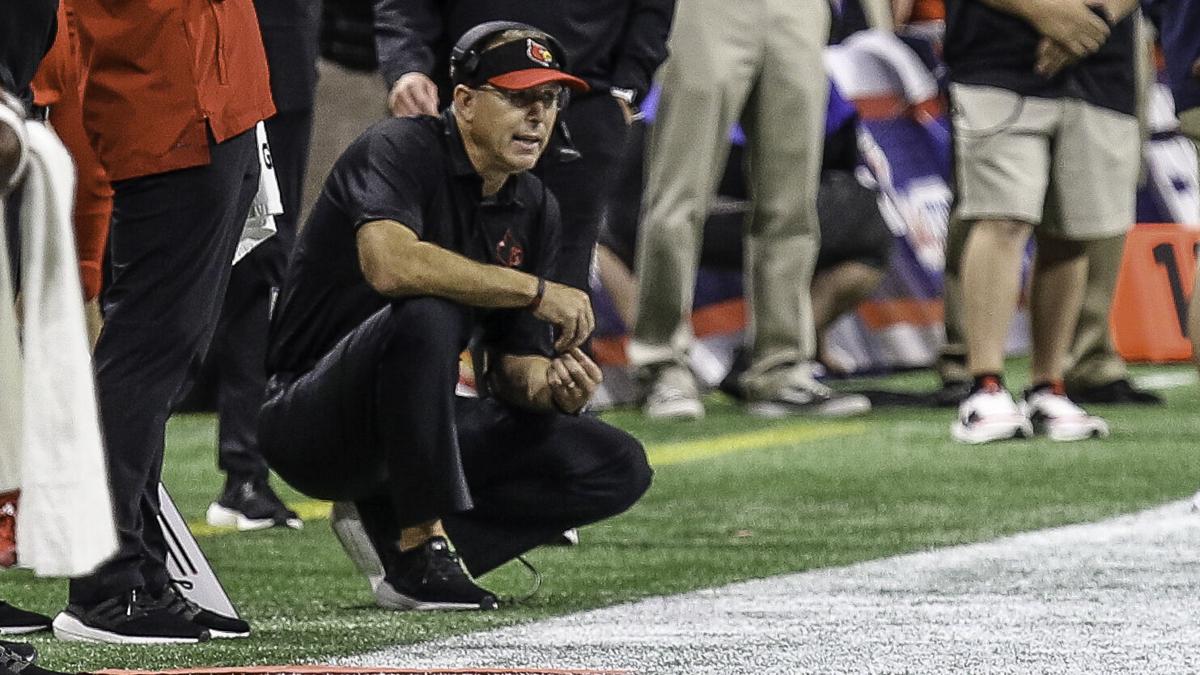 Scott Satterfield's Louisville team has lost three times in the past four games.

LOUISVILLE, Ky. (WDRB) – Air Force receiver Brandon Lewis is 5-foot-9 and 175 pounds, and doesn't look like the kind of guy who could make your secondary resemble a bunch of kids flailing around at recess. Unless, of course, your secondary plays for the University of Louisville.

A quick review of YouTube highlights shows broken ankles and shattered egos from a couple first-half touchdown catches by Lewis in Louisville's 31-28 loss in the First Responder Bowl in Dallas, defenders lunging at air and speeding by when the aspiring Air Force officer slammed on the brakes. The senior from San Diego, son of a naval officer and brother of three marines, sprinted to TD receptions of 64 and 61 yards (the third- and fourth-longest in Air Force history) on Tuesday afternoon.

Hum a few bars of 'Yakety Sax' and you'll capture the mood of those moments.

It's not that there's any shame in giving up big plays to Air Force, or to Lewis (who is averaging nearly 30 yards a catch after his big day Tuesday). The problem is that while the Louisville secondary is depleted, it shouldn’t look outmanned against an Air Force team that hadn't thrown the ball in 91 plays coming in.

When Air Force looks at your pass defense and licks its chops, I don't care who is missing, you've got a problem. An Air Force wide receiver is usually seen but not heard, blocking downfield. Lewis had run the ball 18 times coming into Tuesday's game, and had caught 16 passes. He caught 5 against Louisville.

Air Force threw for 252 yards on Tuesday, its second-highest total all season, and highest total against a Power 5 opponent in at least a dozen years. Louisville coach Scott Satterfield said that packing the box against an Air Force team that led the nation in rushing left some inexperienced players in the secondary one-on-one, and they lost some of those battles.

"When you do try to stop the run, you're going to be more one-on-one on the outside and they took advantage of that," Satterfield said. "We did not play good on the perimeter outside on those throws, but I want to give them credit. You know, No. 13 (Lewis) made some great plays, he's a fast runner. Playing man-to-man, you know, essentially our guys got to win and their guy won. And, you know, I think that was obviously a huge part of the game."

It happens. But that sounds a little bit like the kid who came home with four Ds and a C on his report card trying to tell his parents that he concentrated too much on one subject.

Regardless, at this point the fan base isn't happy. Their main consolation is that not many of them invested in the trip to Dallas to see the game in person. The main concern for Louisville athletics is that many may not invest the money to see them at home early next season.

It's tough enough to rebuild a program after a period of attrition. Doing it amid fan indifference or even anger is more difficult still.

Once again, Louisville found itself on the wrong end of a close game in which it did not make the key plays to win. And we're not talking about difficult plays. They missed a makable field goal. A couple of passes from Cunningham sailed long.

In three trips to the red zone, Louisville scored once. In its three red zone trips, Air Force scored three times. And when Louisville needed the ball back in the fourth quarter, it could not get it. The Cardinals had only 2:31 of possession in the final quarter.

The score was close, but Louisville never got close to having a chance to tie the score or win the game. Cunningham ran up the middle for a 22-yard touchdown with 2:57 left to pull the Cardinals within a field goal, but they could not recover the onside kick, and Air Force was able to run out the clock.

Lewis had a pair of big second-half receptions, one to convert a third down, and another converted a fourth.

"It was a team loss for us," Satterfield said. "It was all three phases. It wasn't just the touchdown passes. I mean, it was offensively for us not scoring we got down there. Twice. And you know, again, we do today the early in the game, we got to score touchdowns when we get down there."

Satterfield did not spare his own staff's performance. When the defense is struggling the offense has to pick up, and Louisville's misfired early. It had a chance to go up 7-0 after stopping Air Force on its opening drive, but a holding call in the red zone, then a subsequent missed field goal, cost the Cardinals.

"We were trying to probably throw too much early," Satterfield said. "Probably should have run it more early in the game because our offensive line was doing a really good job creating holes for our backs. You get hit up in there and Malik to run as well. So that was probably on the coaches early in the game."

Regardless, it's another close loss. And it's a theme that is wearing on the Louisville fan base.

"Four close losses, you know, and it comes down to one or two plays," Satterfield said. "You don't ever know when those plays are going to happen. And, you know, we're just good enough to be right there in those games. But we got to get over the top. We got to get over the hump. We've got to make more plays. It's making a kick, you know, here and there. It's knocking a ball down if I'm covering a guy one-on-one. Offensively, when you get an opportunity to make a play, you've got to make a play. You just never know what other players are going to happen. And we've been so close, you know, we're right there. I feel like this team can continue to grow and develop and get over the hump. We have to, obviously, and we've got a great nucleus of guys to make that happen."

Great or not, the clock now is ticking for Satterfield. People should remember, we've seen good defensive backs before get burned because they were young. We've seen good players at all positions improve over time. But it's difficult to build much excitement in the midst of those struggles, and when people don't see plays being made.

Satterfield is in a tight spot, and I don't know what he can say to improve it. In the end, only winning improves it. I do know, the messaging at the moment is growing old for fans, along with the losing.

Satterfield says some change is coming within the coaching staff. There are open holes to fill, and some administrative positions are being created. But in the end, a second blowout loss to Kentucky followed by a loss to a non-Power 5 bowl opponent isn’t going to do much to buy good will, or time. Satterfield said those moves will come next month. They will need to be good ones. His fourth season in Louisville will be decisive, one way or the other.

"We'll be addressing that over the next few weeks before we get back in January," he said. "You know, several different positions that we'll hire, you know, in all aspects really, and so we'll tackle that next two or three weeks, you know, and then, you know, we'll see what happens over this period. You never know, player-wise or coach-wise in this particular time of the year. This is the time where things happen in the coaching world. We've seen it. We continue to see it every day, you know, but we'll make adjustments and we'll roll with it. And like I said, whoever is coming back here in January, let's be ready to get this program rolling. That's the message."