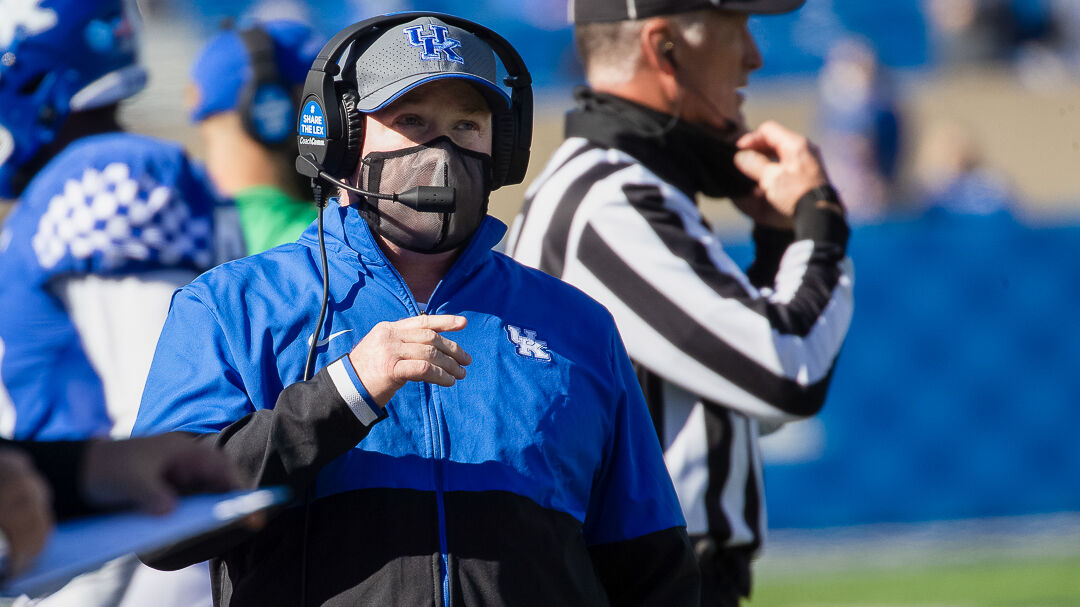 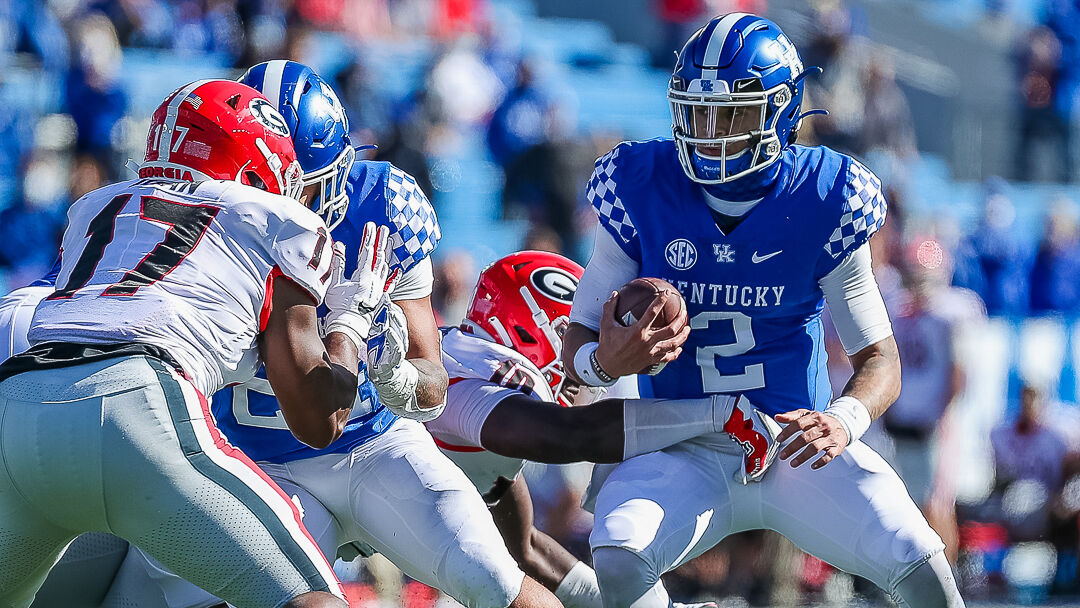 Kentucky QB Joey Gatewood had little success in the air against Georgia. 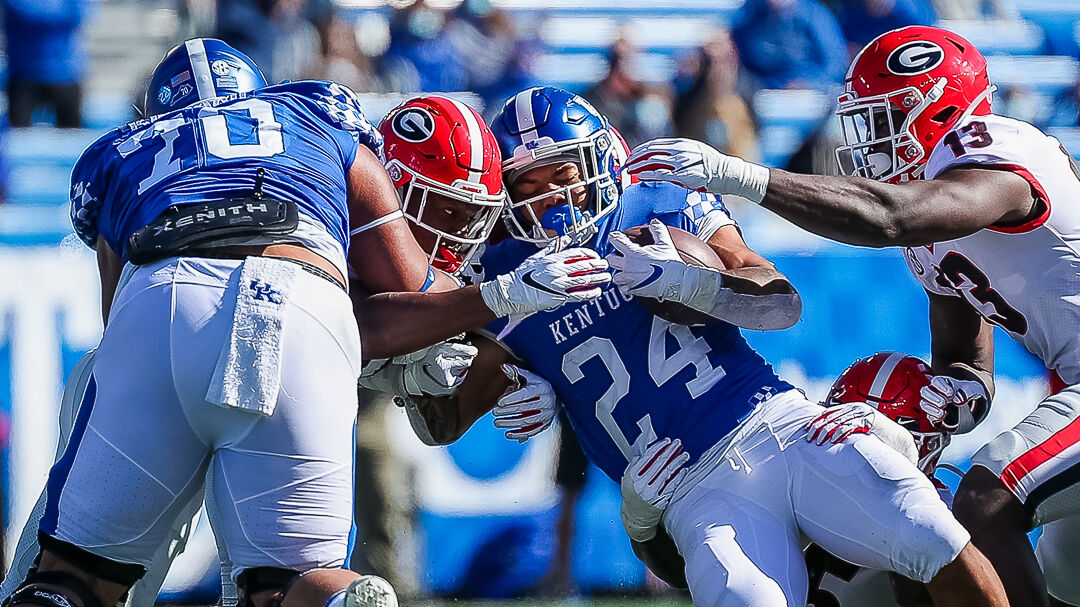 Kentucky running back Chris Rodriguez is brought down during the Wildcats 14-3 loss to Georgia.

Kentucky QB Joey Gatewood had little success in the air against Georgia.

Kentucky running back Chris Rodriguez is brought down during the Wildcats 14-3 loss to Georgia.

LOUISVILLE, Ky. (WDRB) – Kentucky may like its politics conservative — but not its play-calling. Watching the University of Kentucky lose to Georgia 14-3 on Saturday was roughly equivalent to watching a team take strike three with the bat on its shoulder.

You got the feeling that the UK offensive staff is the kind of group that goes to Top Golf to work on its short game.

There are a probably a lot of good reasons that Kentucky offensive coordinator Eddie Gran didn’t open the passing game up more against a very good Georgia defense. As head coach Mark Stoops pointed out, a lot of bad things can happen when you put the ball into the air in obvious passing situations against the Bulldogs.

Better to grind it out, get into the fourth quarter and have a chance to win.

That much, I can appreciate. And Kentucky did have that. They were right in the game in the fourth quarter.

But having gotten there, they didn’t seem to have any inclination to grab at that possibility. They stood at the craps table and never let go of the dice.

It’s not that they didn’t make any throws. Sophomore QB Joey Gatewood did get tossed under the bus a bit after his first college start.

Stoops insisted after the game that the plodding offense wasn’t by design.

“I agree with you,” he said, when asked about the need for more (or any) downfield passes. “I think — and we know that. We tried. Sometimes they were covered and they went to check downs, so it looks like a 3-yard gain when in fact we had something called down the field to try to hit some verticals, try to hit some slants, try to hit some big plays that they took away. So it's not like we didn't have those plays called. We did. We need to create them. We need to make some plays down the field, obviously, and we definitely were working at that today. It didn't always show up with the balls getting down there, getting down the field.”

And again: “I was sitting there on the sideline when it was getting late and we were — I was talking with Eddie and Darin (Hinshaw) on the phone,” Stoops said. “And Joey was told to look for certain routes. And he must have felt they were covered. I can't see exactly what was happening as far as, until we look at the film. But yeah, I agree. After I want to say one of the throws, one of their guys got hurt and we had an opportunity to talk to him and that's exactly what we talked to him about. We're saying, 'Fit one in there. Get the ball down the field and at least try — you got to force it at this point.' So, yes, we were trying, and I agree with you, I think it was difficult there. But again, they know that. They know those plays are coming as well and one of them they had an opportunity to pick for a touchdown and fortunately he dropped it."

It is here that I (reluctantly) recall something Bobby Petrino (forgive me for bringing him up) once told me this about play calling. “If I call a play but haven’t coached the players to make the plays, then it doesn’t matter how good the call is.”

There’s also the time-worn football tradition of giving the next guy down the bench a shot if you don’t like what you’re seeing from the guy in the game.

But Gatewood was in a difficult spot and doesn’t deserve to be roasted after a single game against one of the better defenses in the SEC.

What is more troubling to me is this nagging undertone that, "We at least came close." Tell me if I’m reading this wrong.

Stoops said this postgame: “I think you saw that late in the game in predictable pass (situations), how dangerous they can be. If you watch them this year (in those) they can overwhelm you and obviously turn the game or blow the game wide open with their defense with strip sacks, with interceptions for touchdowns, just creating havoc with their defense in predictable situations.”

So part of the explanation seems to be — did you see how scary Georgia is? You want our quarterbacks to throw the ball into that? What if we get strip-sacked? What if we throw a pick-6?

Absent from that little scenario is this — you’re losing anyway! Yes, 14-3 looks a lot better on the ESPN crawl, but you don’t get partial credit. You’re not trying to flatten the curve. You’re trying to win a football game.

The problem for Kentucky is this — it hasn’t produced in the passing game since the first game of the season. It wasn’t producing with Terry Wilson, who had all the experience you could want. It has good receivers. It has a good (though banged up) offensive line. Right now on offense, it appears to be less than the sum of its parts. It has failed to throw for 100 yards in three of its past four games, averaging 4.2 yards per attempt in that span.

Kentucky now gets some needed time to regroup. It needs to heal up some injuries, particularly on the offensive line. It’ll have time to work with Gatewood and get Wilson back up to speed.

The frustrating part about this for Kentucky is that Stoops has recruited well and put some talent into place on both sides of the ball. The offensive ineptitude is a head-scratcher. Struggles, you could understand. But this goes beyond struggles. Sometimes you feel as if Kentucky’s offense is set up to give the defense a chance to succeed more even than it is set up to win games. Of course, that is not the case. Let me state that again. That isn’t the case. But it felt that way Saturday.

Conservative is a good bet if you’re a politician in Kentucky. It won’t get you anywhere near as far if you’re a football coach.

Indiana reports 63 additional deaths, as it records most COVID-19 deaths in a single month