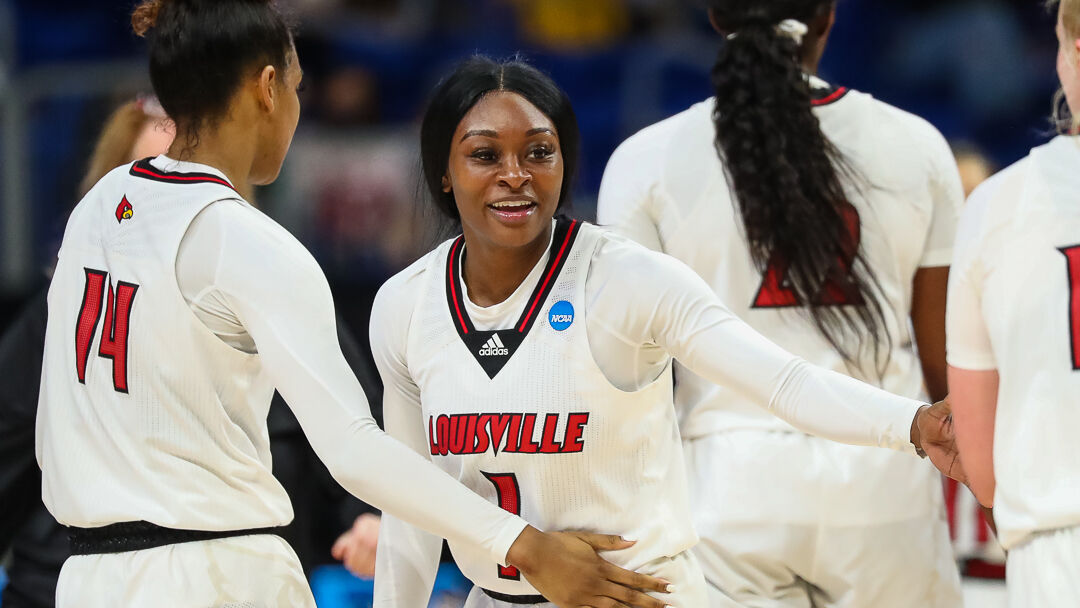 SAN ANTONIO, TX - MARCH 28: The Louisville Cardinals take on the Oregon Ducks in the Sweet Sixteen Round of the 2021 NCAA Women’s Basketball Tournament at Alamodome on March 28, 2021 in San Antonio, Texas. (Photo by C. Morgan Engel/Getty Images) 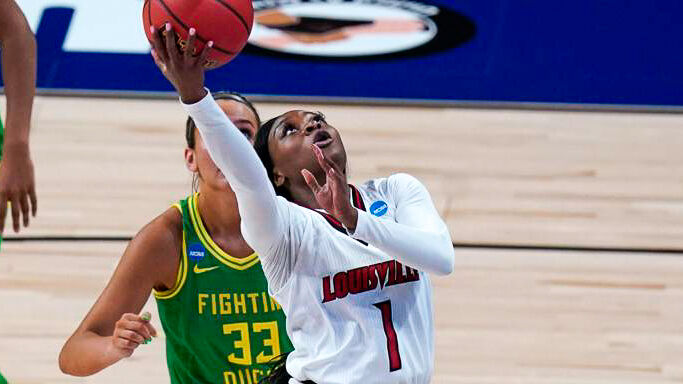 Louisville's Dana Evans goes up for a layup in the team's 60-42 NCAA Sweet 16 win over Oregon.

SAN ANTONIO, TX - MARCH 28: The Louisville Cardinals take on the Oregon Ducks in the Sweet Sixteen Round of the 2021 NCAA Women’s Basketball Tournament at Alamodome on March 28, 2021 in San Antonio, Texas. (Photo by C. Morgan Engel/Getty Images)

Louisville's Dana Evans goes up for a layup in the team's 60-42 NCAA Sweet 16 win over Oregon.

LOUISVILLE, Ky. (WDRB) -- There are moments that you don't get to see when you're not there, and in this year's COVID-sealed NCAA Women's Basketball Tournament environment, wouldn't get to see even if you were there.

Normally, at the NCAA Tournament, as a reporter you head straight for the locker room after the game. While the coach and some players talk in a news conference, you have access to the rest of the team back in the locker room.

I often like to follow the coach and whoever he takes to the news conference, listen to the beginning, then break off and head to the locker room.

It was on that walk on Sunday night in the Alamodome that Louisville coach Jeff Walz shared a moment with his All-American, Dana Evans.

She has been battling her way through a postseason shooting slump. She still had averaged 13 points per game in the NCAA Tournament, and her team was still standing. But she was taking a lot of shots to get to that number, and maybe was pressing a bit.

In the second quarter of Sunday's win, that all changed. She hit a short jumper after Elizabeth Balogun pulled down an offensive rebound and fed her, and then the floodgates opened. Over the final three quarters, Evans matched her career high with 29 points in a 60-42 win.

As they walked through the Alamodome corridor to their little Zoom news conference room, Walz talked to his senior.

"I told her on the walk here to the media room that I was really proud of her, especially with the way she handled things in the first half," Walz said. "I think that first period she was 0-for-4 from the field, 0-for-3 from three, and we're up 10-8. She took good shots. She didn't force anything. She let the game come to her. That's one of the things I kept trying to explain to her and tell her was, you've got to let the game come to you. When you do that, you're going to be able to get shots in rhythm. When she gets shots in rhythm, she's able to knock those down. I thought our team did a great job. We set some great screens for her. It was really, really exciting for her."

Walz wasn't the only one reaching out. Evans got a text from Asia Durr, unprompted, with pretty much the same advice on Saturday. Angel McCoughtry was Tweeting her support throughout Evans' performance.

"Asia, she's just a great person all around," Evans said. "She wants to see everyone do well. She sent me a text. She knew I've been struggling, not really playing like myself. She sent me a nice text just telling me to relax. Let the game come to me, not overthink it. She told me to do a lot of form shooting and just let the game come to me. I took her words and it worked."

Here's the impressive thing about Evans. Good night, bad night, whatever, you ask her a question about her game, and she's going to talk about someone else.

She was asked on Sunday night about a big three, NBA depth, she made to make the Louisville lead 13 and basically put the game away in the fourth quarter. She wanted to talk about the offensive rebound of her missed free throw -- by Mykasa Robinson -- that set the shot up.

"Well, I missed a free throw," she said. "Mykasa got the rebound, which is something she does a lot for this team. Then I was able to hit my second three. Without Mykasa getting that rebound, that wouldn't have happened. It starts with everything little thing that Mykasa does, whether it's diving on the floor for a ball, getting offensive rebounds. She just makes it happen for us, she gets us easy looks."

She often speaks of her faith, whether on social media or in news conferences, and she has done so after her games in the postseason this year. She was philosophical when asked about her recent offensive slump, and the timing of its ending on Sunday night.

"I knew it would end the at right time, when I needed it to," Evans said. "My teammates, they didn't need me to do what I did tonight the other games. Everybody has been stepping up. I think everything happens for a reason. My teammates were able to get their confidence and get going. Now that I feel like I'm back to my normal self, I feel like we're going to be just fine. . . . I think it was perfect timing. Like I said, I think God does everything for a reason. I will never question Him. I just keep believing and trusting Him, trusting in my coaches and teammates. We got this far because of our coaches and because of this team. I think we have a really talented team. Yeah, we still got some more games to play."

Walz said he mainly wanted to see Evans relax and enjoy the tournament. On Sunday, he felt like she did.

"She puts so much pressure on herself. She's always trying to prove to people that she's good," Walz said. "I just tried to tell her before we came into this tournament, you've got nothing else to prove. You're two-time ACC Player of the Year. You're a two-time All-American. I mean, I'd put her up there as Player of the Year in the country. I just said, enjoy it. This is your last go-around at this. It's one of the things I try to tell all my players. As coaches, this is my 14th year as a head coach, and these players, it's like when they're in high school, they can't wait to get to college. When they're in college, they can't wait to hopefully play professionally. I just keep telling them to enjoy every second of it because it goes by so fast. We all learned last year how quick it can all be taken away from us. I just told Dana, just enjoy this. Enjoy the experience. Enjoy the moment with your teammates. And the game will come to you. It did. She was really good tonight."

It seems as if Evans has been playing for Louisville forever. But because of last season's COVID cancellation she is only playing in her third NCAA Tournament. On Sunday, her 29-point performance moved her into a tie for No. 8 on the list of Louisville's all-time NCAA Tournament scorers.

And, with a date with No. 1 seed Stanford looming for a trip to the Final Four at 9 p.m. Tuesday, she isn't finished yet.

Soundtrack for Thunder Over Louisville announced

Against the Grain bringing craft brew, new menu to downtown