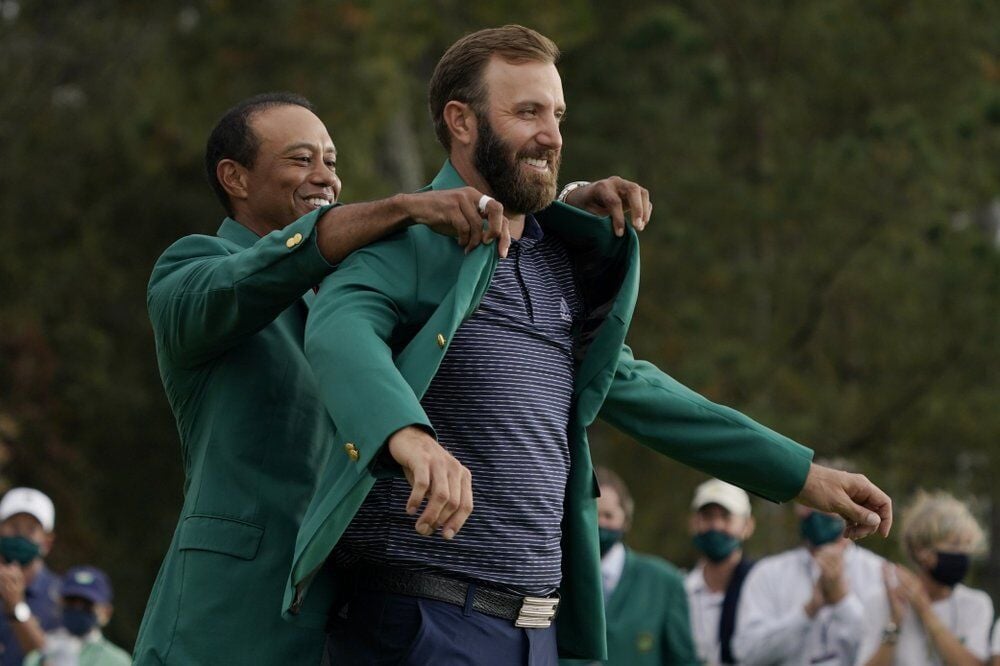 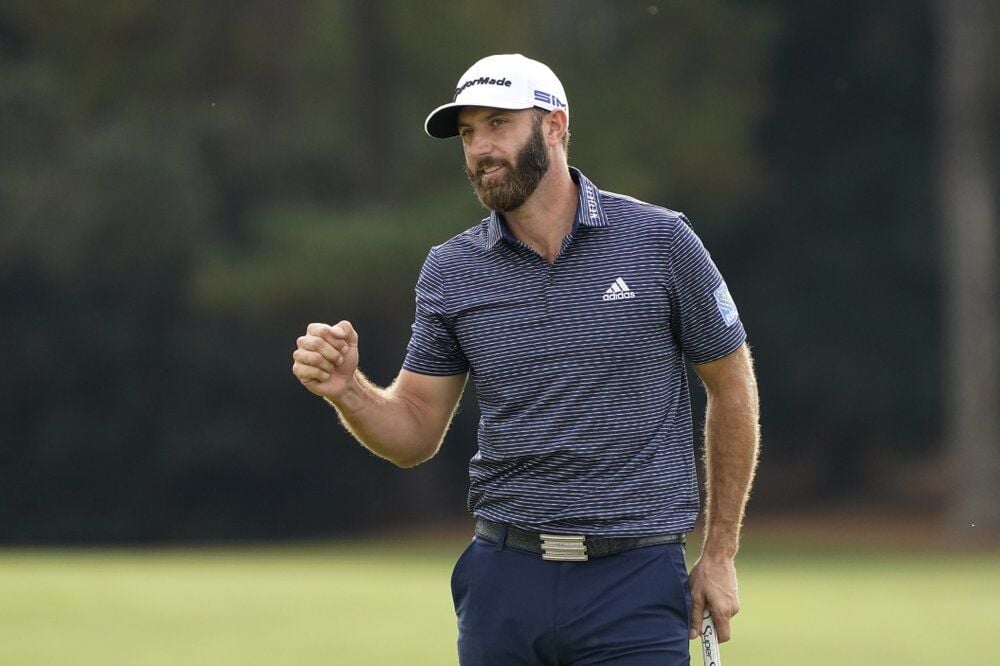 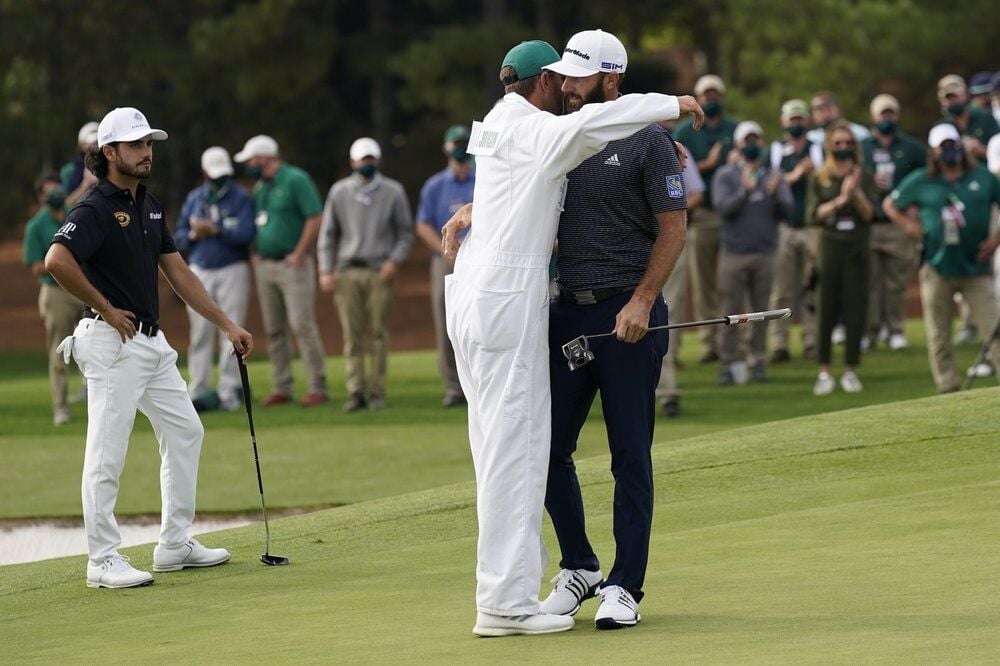 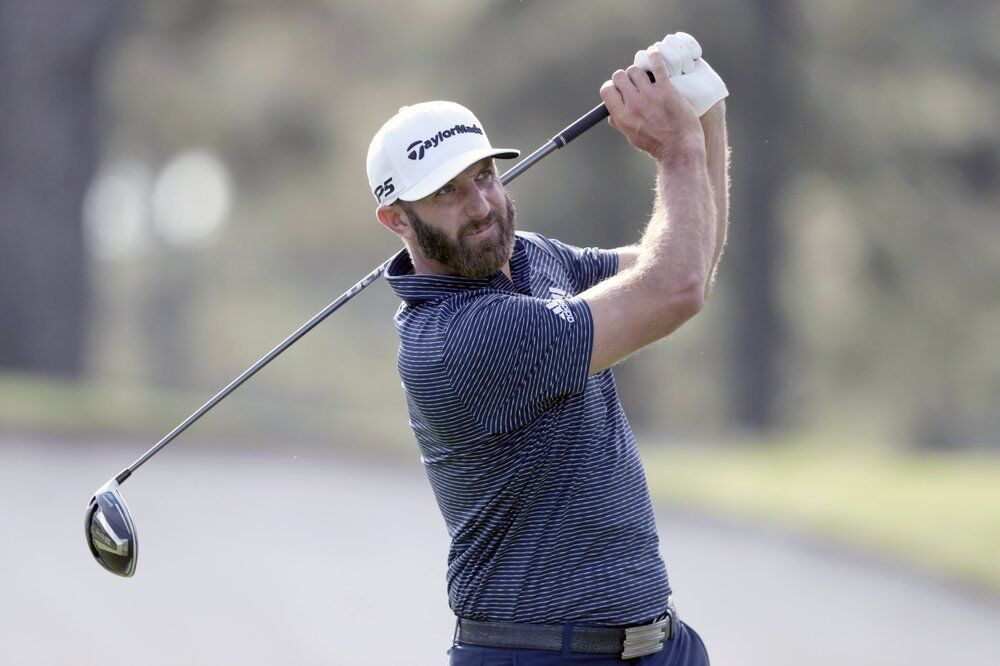 Dustin Johnson tees off on the third hole during the final round of the Masters golf tournament Sunday, Nov. 15, 2020, in Augusta, Ga. (Curtis Compton/Atlanta Journal-Constitution via AP) 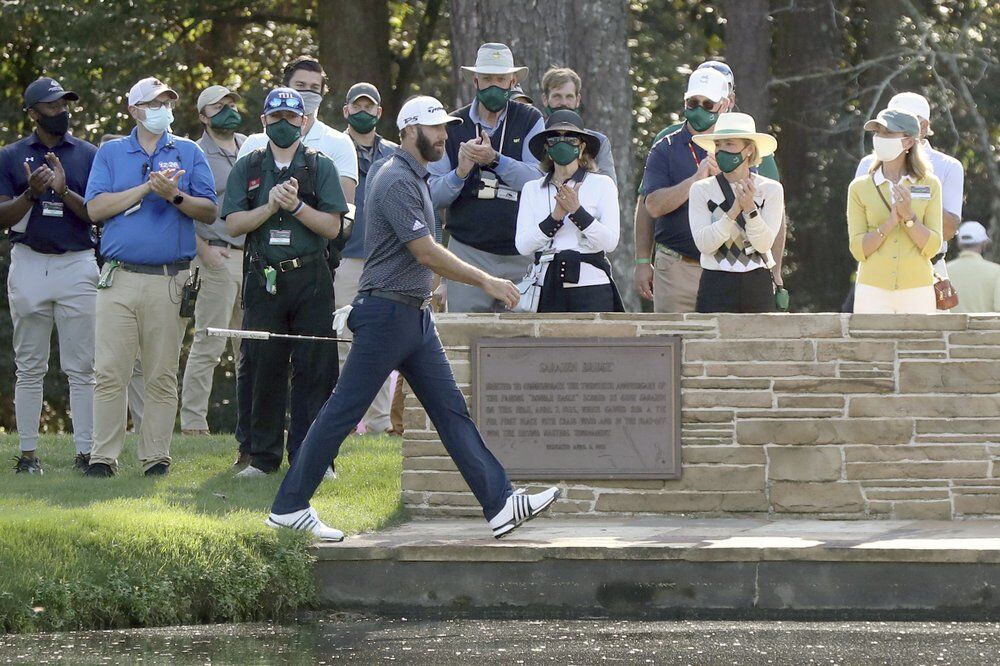 Dustin Johnson walks over the Sarazen Bridge on his way to the 15th green as spectators applaud during the final round of the Masters golf tournament Sunday, Nov. 15, 2020, in Augusta, Ga. (Curtis Compton/Atlanta Journal-Constitution via AP)

Dustin Johnson tees off on the third hole during the final round of the Masters golf tournament Sunday, Nov. 15, 2020, in Augusta, Ga. (Curtis Compton/Atlanta Journal-Constitution via AP)

Dustin Johnson walks over the Sarazen Bridge on his way to the 15th green as spectators applaud during the final round of the Masters golf tournament Sunday, Nov. 15, 2020, in Augusta, Ga. (Curtis Compton/Atlanta Journal-Constitution via AP)

AUGUSTA, Ga. (AP) — Nothing ever comes easily for Dustin Johnson in the majors, except for slipping into that Masters green jacket.

Johnson overcame a jittery start that conjured memories of past majors he failed to finish off. He turned that into a command performance, making sure this one-of-a-kind Masters with no fans also had no drama.

Johnson's five-shot victory was the largest at the Masters since Woods won by 12 in his record-breaking win in 1997. All that was missing were the roars for any of his pivotal putts early and his birdie putts on the back nine that put it away.

The Masters, postponed from April because of the COVID-19 pandemic, was forced to do without patrons for the first time. Johnson still received a warm reception coming up the 18th from club members and their wives, his partner, Paulina Gretzky, and a few champions.

Two-time champion Bubba Watson was there to congratulate him.

“I always dreamed of having one of those,” Johnson said as he went to sign his card. “Now I got one.”

Johnson’s four-shot lead was reduced to one after five holes, and then he quickly restored control. Cameron Smith and Sungjae Im each shot 69 and were the only ones who really had a chance.

Smith got quite the consolation. He became the first player in Masters history to post all four rounds in the 60s, and all it got him was a silver medal. Johnson became the 12th Masters champion to never trail after any round, and his closing 68 broke another record held by Woods — it was his 11th consecutive sub-par round at Augusta National.

No one had a better finish than defending champion Tiger Woods, but only after the five-time Masters champion posted the highest score of his career — three balls in Rae’s Creek for a 10 on the par-3 12th hole. He finished with five birdies over the last six holes to salvage a 76.

The betting favorite and biggest basher in golf, Bryson DeChambeau, couldn’t even beat 63-year-old Bernhard Langer, who shot 71 and wound up one shot ahead of the U.S. Open champion.

These were only sideshows on a quiet Sunday at Augusta National.

Johnson, the first No. 1 player in the world to win the Masters since Woods in 2002, was the main event. He won for the 25th time worldwide and his second major — he won the U.S. Open from four shots behind at Oakmont in 2016 — comes with some big perks. He can return for the rest of his life and will host the Masters Club dinner next April for champions.

But even a record score, and the widest margin of victory since Woods won by 12 in 1997, didn’t mean it was easy. This is Johnson, after all, who for all his talent has dealt with more than his share of misfortune, not all his own doing.

He was the 16th player to take at least a four-shot lead into the final round of the Masters, and only four had failed to win, most recently Rory McIlroy in 2011.

That lead was down to one shot after five holes.

From short of the bunker on the par-5 second, Johnson muffed his flop into the bunker and had to scramble for par at the easiest hole on the course Sunday. After he settled himself with a birdie on No. 3, he came up short of the green and took three putts for bogey, then found a fairway bunker off the fifth tee, had to lay up and made another bogey.

Im started with two birdies in three holes, and saved par with a fabulous flop over a bunker behind the fifth green. Suddenly, he was one shot behind. Ahead of them was Smith, suddenly two shots behind.

Just when it looked as though Johnson might he headed to a meltdown, it all changed on one hole.

Johnson’s tee shot to a pin on the top-right shelf at the par-3 sixth settled 6 feet away for birdie. Im chipped from just behind the green to 3 feet and missed the par putt. Johnson’s lead was back to three.

Then, with Johnson blocked by pine branches and having to punch low into a front bunker at No. 7, Im from the fairway sailed the green into a bunker, blasted out through the green and made bogey.

Smith was still within two shots when they made the turn, and the wind was stronger that it had been all week, but the Aussie could manage only one birdie, and by then it was too late.

Nothing is sweeter than that walk up the steep hill to the 18th green with a five-shot lead and a green jacket waiting. Except in this case, there was no one to cheer, hardly anyone to watch.

There were no roars this week. White and pink blooms of azaleas and dogwoods were replaced by gold and brown hues of Augusta in autumn. It really was a Masters unlike any other, except there was no mistaking that green jacket.

It’s a good fit for Johnson.