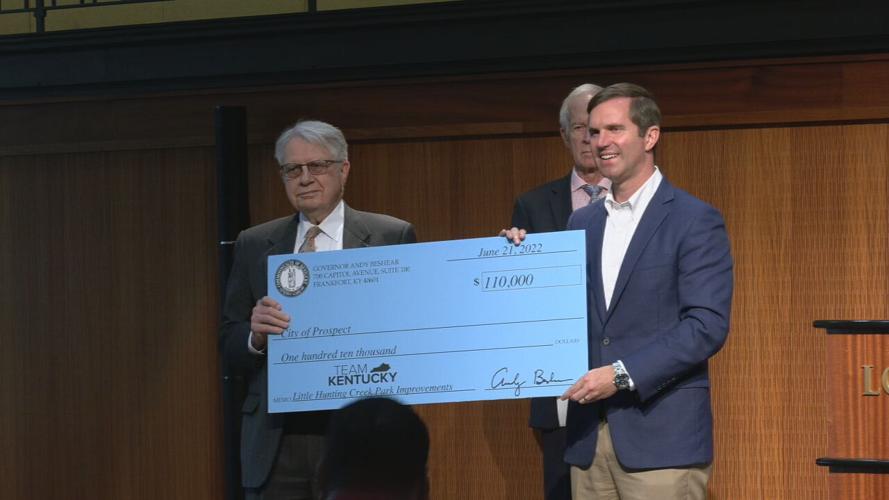 Mayor John Evans (left) and Kentucky Gov. Andy Beshear, as Beshear presents the city of Prospect with a check for $110,000 to improve Little Hunting Creek Park. 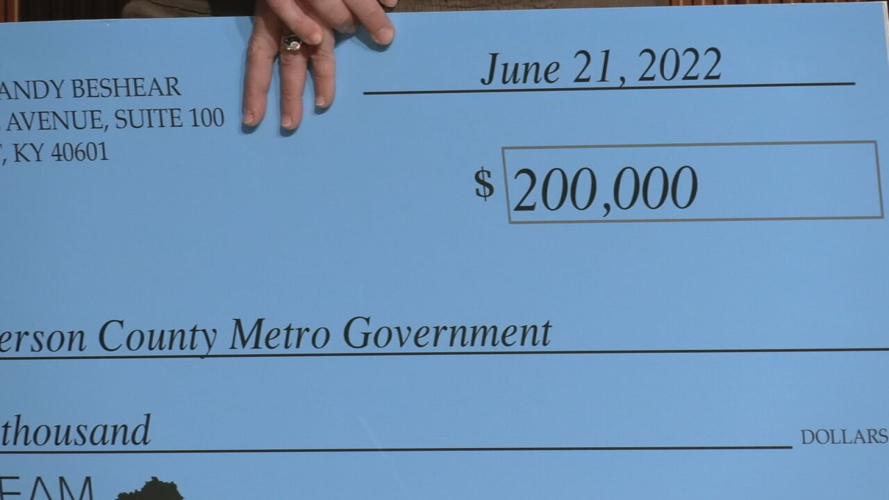 A check for $200,000 to Jefferson County for improvements at Jefferson Memorial Forest. The check was presented by Kentucky Gov. Andy Beshear on June 21, 2022.

More than $300,000 in grants will be used to improve 3 Jefferson County parks

The grants were awarded Tuesday morning inside Metro Hall. Kentucky Gov. Andy Beshear, along with the mayors of Louisville, Prospect and Middletown, gathered to celebrate the grants that will go toward improving parks in Jefferson County and making them more accessible for everyone.

Jefferson Memorial Forest -- specifically the Tom Wallace Lake portion -- will get $200,000 to install an ADA compliant path, along with a board walk, a charging station for cars and more. A complete list of improvements includes:

Little Hunting Creek Park in Prospect will get $110,000 to make a fully accessible green space with a pavilion, playground and walking trails.

"Little Hunting Creek Park is a grassy, beautiful acreage lying between our City Hall and the entrance to one of our neighborhoods, Fox Harbor," said Mayor John Evans, in a statement. "We are about to develop it into a park featuring walkways, lighting, benches, fountains, a children's playground, a pavilion for concerts, plays and other events, and an expanded parking lot next to City Hall. It looks like we will break ground quite soon. The playground will be 'community build,' meaning we are buying the equipment, but resident volunteers will assemble it."

Lastly Wetherby Park in Middletown received a $49,000 grant to add a playground and parking as well as benches and extended walking paths.

"This is a great example, governor, of how the state and suburban cities can work together," said Middletown Mayor J. Byron Chapman. Governor, the lifestyle that grant will support enhances quality of life as we talked about earlier and the youth of Middletown and the Commonwealth of Kentucky.

The grants for the parks are from the federally funded Land and Water Conservation Fund.

Gov. Beshear says these grants will greatly improve parks and attract visitors during a time when everyone wants to be outside their house more after the pandemic.

CRAWFORD | After yet another big trade, Racing's O'Connor says additions are coming