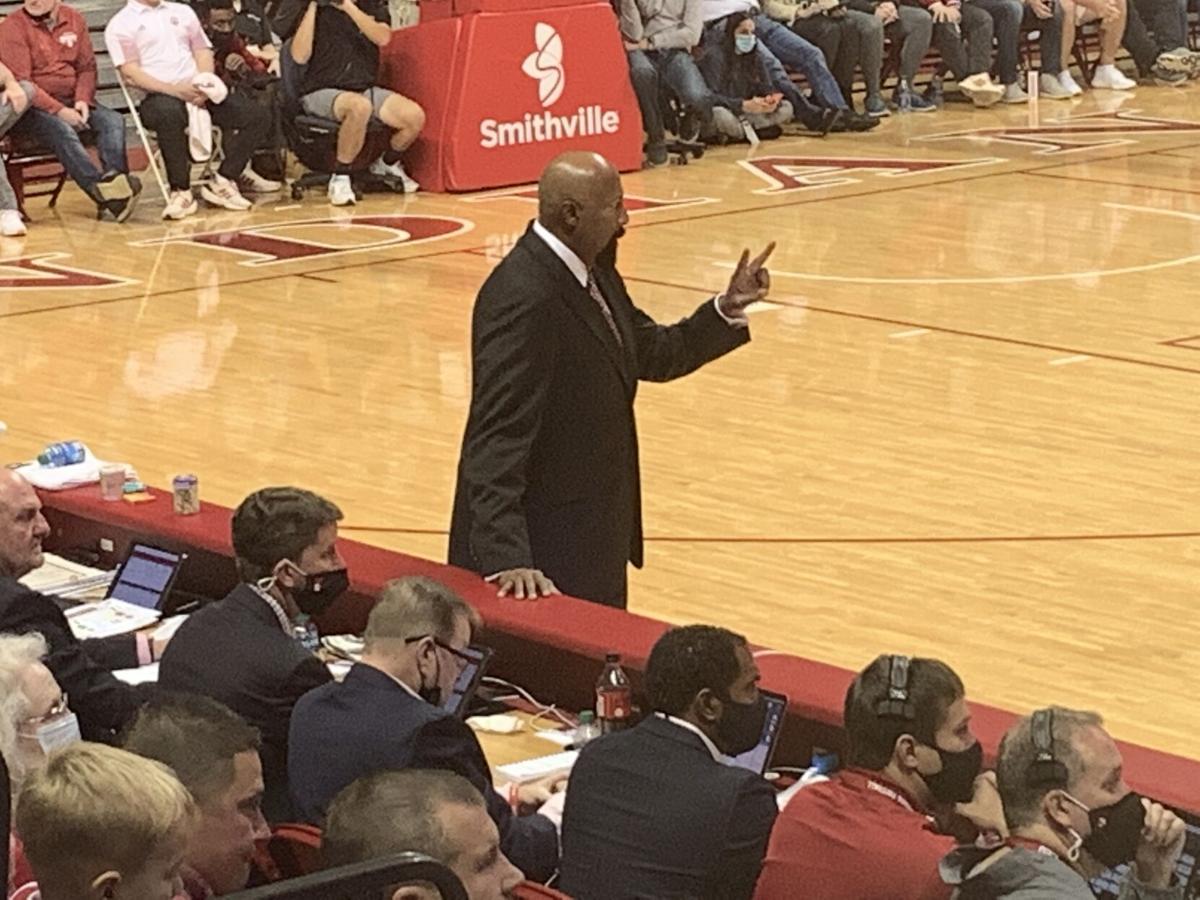 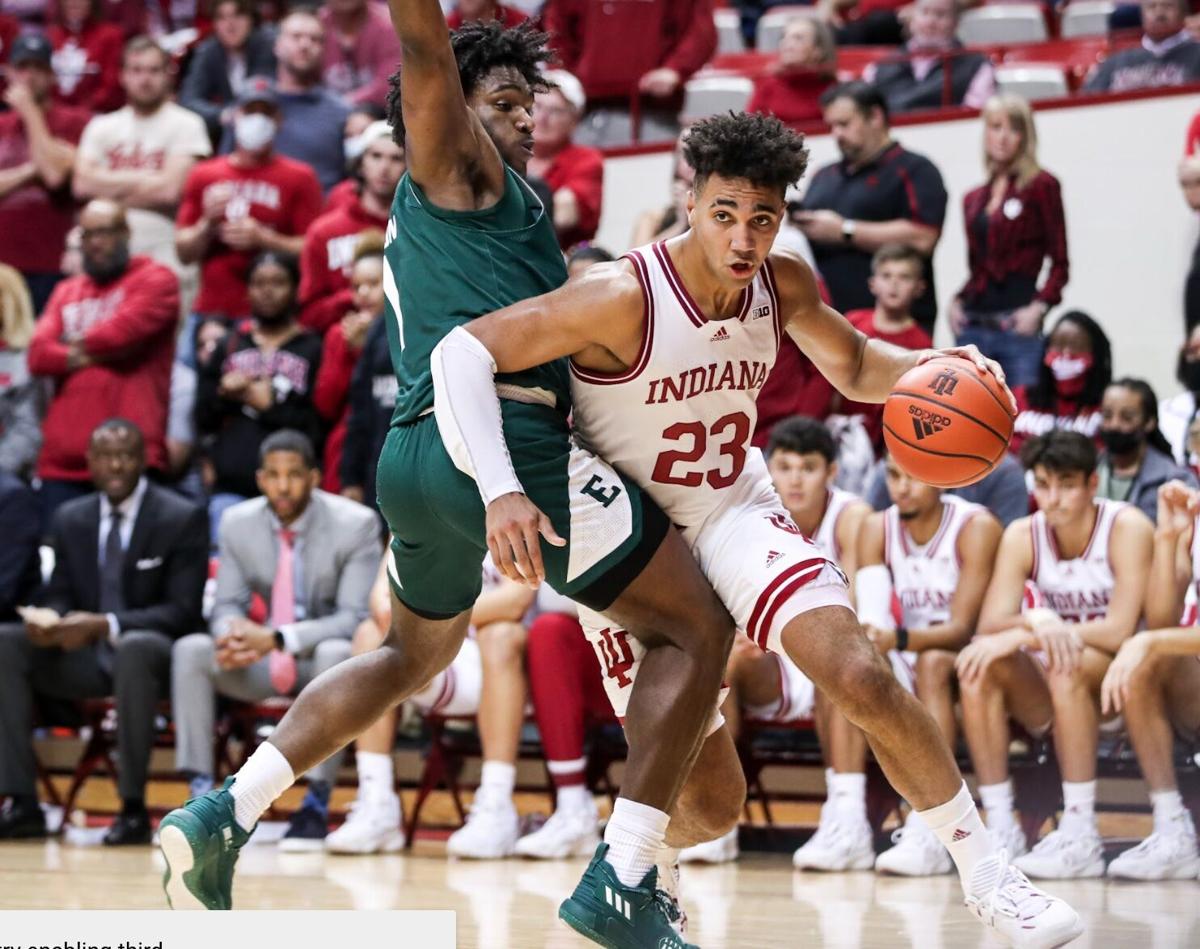 Ball State dropped 77 on the Hoosiers in Knight’s first game 50 years ago.

Nobody has forgotten the 90-69 uppercut Indiana State dropped on Archie Miller four years ago. The Sycamores marched into Simon Skjodt Assembly Hall and made 17 three-point field goals as Miller lost his IU debut.

It showed — and the defense was absolutely, positively necessary.

Indiana squeezed 11 consecutive missed field goals and three turnovers out of Eastern Michigan to start the game Tuesday night. The Hoosiers needed every bit of that first-half defense to scramble to a 68-62 victory in Woodson’s debut.

"In the first half we were up in them contesting every shot," Woodson said. "We got soft. We were comfortable with the lead. Things changed drastically. But I'm not disappointed. I liked the way we played in spurts.'

The Hoosiers needed every minute of that defensive effort because they wobbled on offense for most of the game and then wobbled on defense in the second half. They missed 20 of 24 three-point shots as well as eight of 20 free throws while squandering nearly every bit of a game they led 40-19 two minutes into the second half.

Trayce Jackson-Davis led Indiana with 21 points. Xavier Johnson, the point guard who transferred from Pittsburgh, scored 14, including a critical layup with 16 seconds left after Eastern Michigan cut IU’s lead to 64-62.

"We were up 20 and we just didn't step on their throats," Jackson-Davis said.

"We've still got work to do," said Johnson.

The primary work remains shooting the basketball. Indiana struggled during Miller's four uneven seasons as the head coach because the Hoosiers were consistently a below-average team shooting from distance.

Ugly shooting was a primary reason Miller was fired with three years and more than $10 million on his contract. Enter Woodson, who built his reputation coaching in the NBA and scoring 2,061 points while playing for Knight from 1976-80.

Indiana's uneven shooting continued against Eastern Michigan. Parker Stewart made the game's first basket from three. After Miller Kopp missed a three, Stewart made another. Within minutes, IU was ahead, 10-0.

But after making two of their first three from distance, they missed 19 of their next 21. Miller Kopp, Trey Galloway, Race Thompson, Tamar Bates and Jordan Geronimo went 0 for 12.

Here's the issue: Johnson said that Indiana shot the same percentage, 16.7 (4 of 24) in the team's last scrimmage on Sunday.

"We've got shooters," Johnson said. "We've just got to make the shots."

"We missed a lot of wide open threes," Woodson said. "Right now they just have to get confident and make them ... we've got to keep shooting them because it's part of the game. It's on me. I've got to get them better."

And IU must keep playing defense the way Indiana defended to open the game as the Hoosiers surged to a 10-0 edge and did not allow Eastern Michigan to score for nearly the first 7 1/2 minutes.

It was the fewest points allowed by an IU team in a coach’s debut since St. Joseph’s scored 62 against IU in Lou Watson’s first game on Dec. 1, 1965. Eastern Michigan made less than 27 percent of its 2-point field goal attempts.

The Hoosiers were choppy on offense. Too many quick three-point field goals without making the extra pass. Knight would not have approved that.

But Woodson pledged that he would bring a faster, aggressive style — and that’s what the Hoosiers attempted to deliver. Turnovers were not an issue. Indiana made only eight. Jackson-Davis (14) and Thompson (10) were strong on the glass, but Indiana only out-rebounded Eastern Michigan by one.

It was Noah Farrakhan, a transfer from East Carolina, who put the deepest furrow in Woodson's brow by scoring all 18 of his points in the second half, including three shots from distance.

Thompson steadied IU with a basket and then a free throw. Jackson-Davis made three free throws while Johnson had the layup and a free throw that allowed Woodson to finally exhale.

"If we build a defensive foundation, we'll be in every ball game and give ourselves a chance to win," Woodson said.

The Hoosiers return home to play Northern Illinois on Friday night before facing a more difficult challenge against St. John’s in Bloomington on Nov. 17.