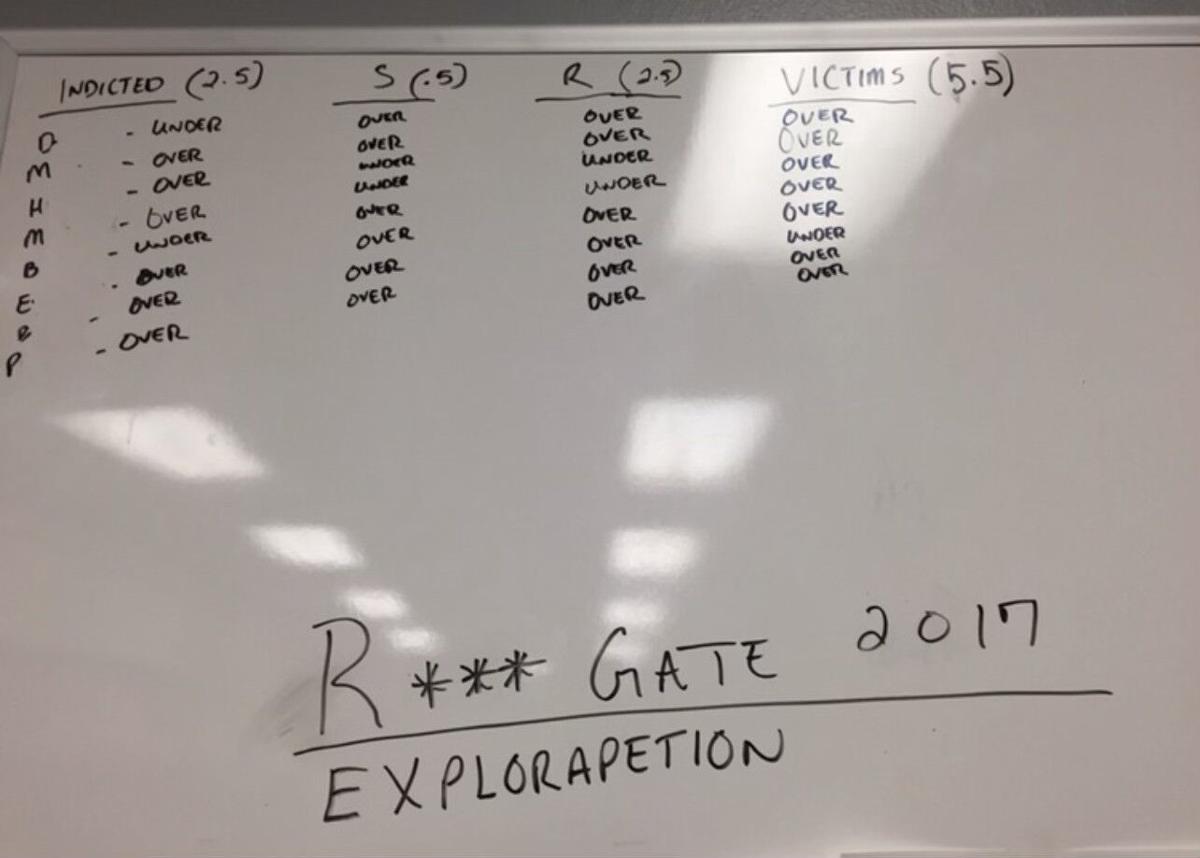 A photo of the whiteboard alleged to show betting odds on the Explorer scandal, obtained by WDRB news.

LOUISVILLE, Ky. (WDRB) -- A former advisor for the now-defunct Louisville Metro Police Explorer program is suing the city, claiming he was retaliated against, in part, for reporting sexual abuse by officers in the youth mentoring program.

Former Officer Paul Paris claims he was the first person to blow the whistle in 2013 on sexual abuse of minors by officers in the department but has suffered "tremendous consequences" as a result, according to the lawsuit filed last week.

The lawsuit, filed by attorney Sam Aguiar in Jefferson Circuit Court, claims the department and the city did not take take accountability for the sexual abuse, including allowing the program to continue for another four years after the initial allegations.

In addition, Paris said former Officer Kenneth Betts was allowed to resign and get hired at another department after police stopped an ongoing investigation into the allegations against him. Betts is currently serving 16 years in federal prison on child pornography and enticement charges. He also pleaded guilty to sodomy charges in state court.

Two other officers have been convicted of sexual abuse of a minor in the youth mentoring program.

Police and city officials are accused in seven federal lawsuits of concealing evidence of the conduct by intimidation, destruction of evidence, deletion of information and refusal to comply with the Kentucky Open Records Act, as well as conspiracy to cover up the wrongdoing.

The lawsuit filed by Paris also argues that dozens of former Explorer members had been "propositioned, molested, intimidated or assaulted by officers."

And while Mayor Greg Fischer's office denied knowing anything about the allegations until 2017, staffers were briefed "on the matter three years prior," according to the lawsuit.

The city and LMPD do not discuss pending litigation.

The suit alleges Paris was passed up for multiple assignments in spite of his qualifications for them. And Paris claims that following the incidents involving the Explorer program, he was made "guilty by association" within LMPD and passed over for specialty assignments "despite being the most qualified for the available positions."

In 2017, there was a whiteboard placed in an LMPD division headquarters which was titled "R***Gate" that wagered how many officers would be indicted and the possible number of charges of sodomy and rape each listed officer would face, according to the suit.

Paris, who was never charged, was one of the officers listed on the whiteboard.

"Despite this horrific depiction, Paul continued to do his job to the best of his ability," Aguiar wrote in the suit.

An independent review of the program commissioned in 2018 found that Paris was the first inside the department to report the potential sexual harassment and abuse to supervising officers.

At a community outing in July 2013, one of the youth explorers came to Paris with concerns that Betts — an advisor in the program — was making the explorer uncomfortable by sending shirtless photos of himself, the report found. Paris then advised the explorer to send a series of text messages to Betts to see how he would respond. Eventually, Betts responded to the youth with "I really want to make out," according to both the independent investigation and court documents.

According to the lawsuit, it was Paris' "reporting of the information he uncovered to multiple commanding officers, which set into motion the events which led to several validated incidents of sex abuse against minors by members of LMPD."

Betts was allowed to resign from the department in 2014. An investigation into LMPD's handling of allegations of sexual misconduct in the youth Explorer program found police made several "mistakes," including a failure to look into possible criminal conduct and determine if the abuse was widespread.

In the lawsuit, Paris — who is Black — also alleges racism within the department, claiming officers referred to Black females as "Quita" and Black male citizens as "Jay."

Paris also claims he was retaliated against after being shown locally and nationally hugging a protester on May 31, 2020, during the widespread demonstrations over the Breonna Taylor fatal police shooting. 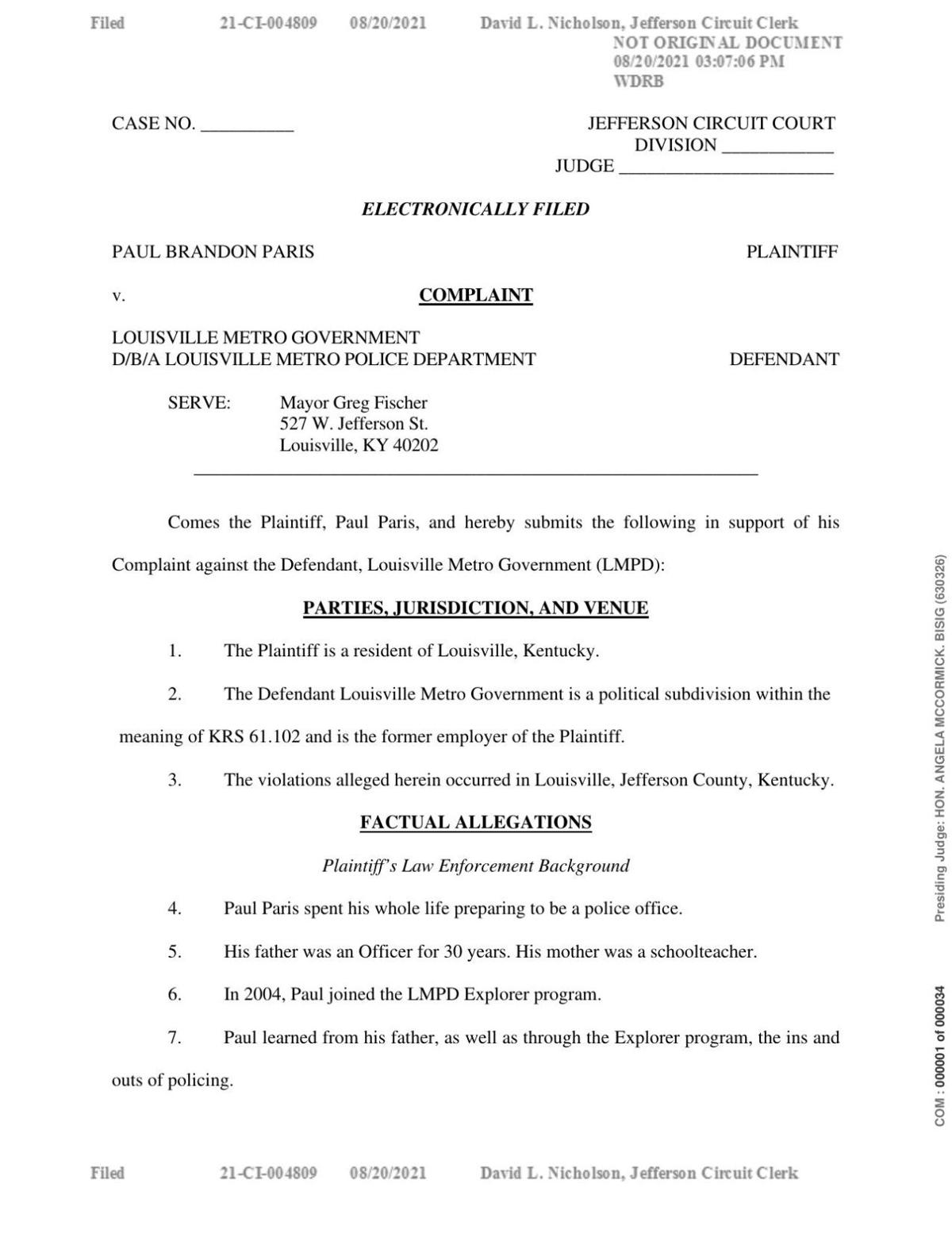 "The Chief who disciplined him was no longer in office," according to the suit. "And nobody explained to Paul what had changed between the time the incident was watched on video (of the pursuit) in February 2020 and the time the letter was sent to him in August 2020."

He resigned in September 2020, "tired of the environment LMPD had created for him," according to the suit.

But the lawsuit claims Paul he had trouble finding a job in law enforcement, because the department's investigation eventually concluded he would have been fired for the pursuit policy violation had he not resigned.

No one was hurt during the pursuit, and Paul claims he "potentially saved lives" while other officers involved in chases have ended with people being killed or injured.

"White officers have repeatedly engaged in police pursuits which have resulted in loss of life, damage to property, severe injuries and which were in violation of policies and law," according to the suit. "These Officers were not terminated for the pursuits and in most cases were not disciplined at all."

The lawsuit is seeking unspecified monetary damages and a jury trial.