Republican Attorney General Daniel Cameron had sought to block all of the governor's executive orders, including a statewide mask mandate, in a motion he filed Thursday in Boone County Circuit Court in northern Kentucky. Cameron also had intervened in a lawsuit in Scott County.

Earlier this week, Beshear asked the Supreme Court to nullify those rulings.

With all seven justices in agreement, the high court issued a stay on the lower court actions Friday afternoon. That lets the Beshear orders remain in effect for now.

"Given the need for a clear and consistent statewide public health policy and recognizing that the Kentucky legislature has expressly given the Governor broad executive powers in a public health emergency, the Court orders a stay of all orders of injunctive relief until such time as the various orders are properly before the Court with a full record of any evidence and pleadings considered by the lower courts," the Supreme Court's order says. 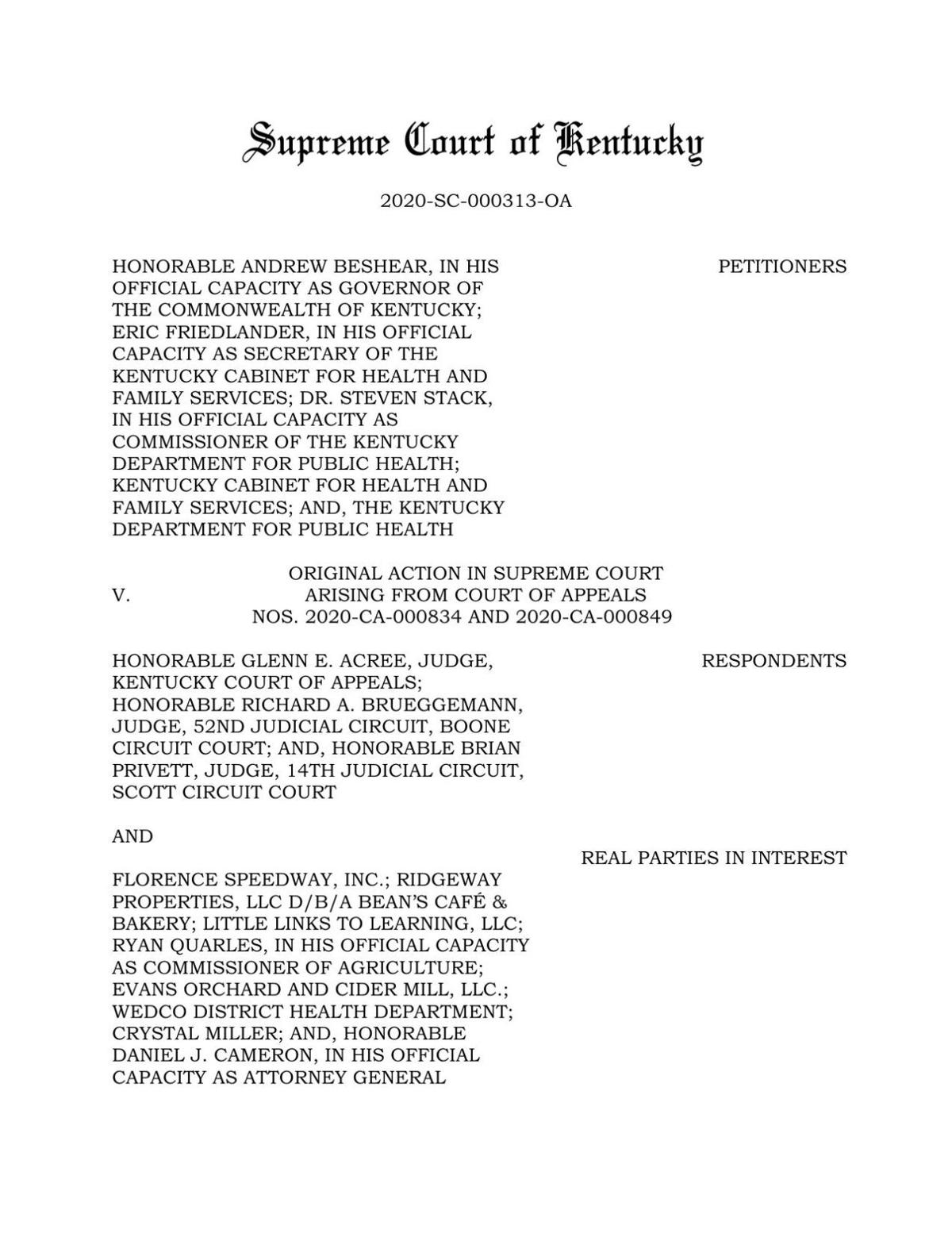 In perhaps most wide-ranging ramification, the high court action means day care centers must return to smaller class sizes -- no more than 10, as Beshear previously ordered. An earlier Boone County Circuit ruling allowed groups of up to 28 children.

Speaking in Frankfort, Beshear said he was "relieved" by the ruling.

If his restrictions had been scrapped, the governor said Kentucky would have lacked basic hygiene and safety requirements such as masks, social distancing and crowd-size restrictions as new cases increase. The state reported 531 new infections on Friday, the third highest in a single day since the pandemic began.

"My biggest fear was that we were going to have a period of time where we didn't have the tools we needed to fight this war, that we removed the ammunition from our troops and said, 'Good luck with the enemy,'" he said.

In a statement, Cameron said "we respect the Supreme Court’s decision to maintain these orders until the court can undertake its proceedings.

"Our goal in joining these cases is that the law is followed and the rights of Kentuckians are protected.  We look forward to having the Supreme Court take up these important issues in the coming days."

Cameron tweeted shortly after midnight that Boone County Circuit Judge Rick Brueggemann "indicated" he would sign an order halting all of Beshear's orders. Hours later, a Beshear spokeswoman said that was the administration's understanding as well.

No order has yet been entered. A Boone Circuit Clerk's employee told WDRB News she wasn't sure if it would be signed on Friday.

Cameron said on Twitter that a blocking the governor's orders would be "much-needed relief to Kentucky businesses that joined us in challenging the Governor's notion that he has absolute power apart from the law."

Beshear spokeswoman Crystal Staley said Friday morning that "[t]he lives of many Kentuckians are on the line," as Brueggemann prepared his order.

Amid an increase in weekly average of cases of COVID-19, Beshear last week required Kentuckians to wear face coverings in many public settings.

Even before then, however, a number of private businesses made masks mandatory for their customers. Those decisions would be unaffected by any change to Beshear's mask order.

But the state’s education system has relied on Beshear’s COVID-19 executive orders to help school districts plan for the upcoming school year in the midst of a global pandemic.

The Kentucky Department of Education cited one of Beshear’s initial executive orders in a June 24 memorandum informing superintendents to expect unlimited nontraditional instruction days and per-pupil funding flexibility for school districts in the 2020-21 school year.

Those relief measures were later codified by the Kentucky Board of Education in emergency regulations on July 10.

Kentucky's school systems could be "devastated" and forced to bring students back to classes so they can secure state funding, he said.

"I've stayed up the last two nights wondering what our school districts could do," Beshear said. "Could they make a real decision, or would they be so financially strapped they'd be forced to make one?"

Toni Konz Tatman, interim communications director for KDE, said because one of Beshear's executive orders suspended state laws regarding school funding, attendance and nontraditional instruction, the flexibility granted by recent actions "with overwhelming demand" will be invalidated if the governor's executive orders are nullified.

School districts are limited to 10 days of remote learning under law. KDE guidance has said school districts should prepare to transition to nontraditional instruction if there are COVID-19 outbreaks within their communities or individual schools.

State funding is regularly based on in-person attendance. If schools are forced to reopen completely for the 2020-21 school year, "low student attendance as a result of COVID-19 will negatively impact the funding our districts desperately need to carry out their work," Tatman said in a statement.

Kevin Brown, Kentucky's interim education commissioner, says he is "very concerned if any of the temporary flexibility afforded to our school districts is voided as a result of a ruling of the courts."

"Since we began facing the impact of the COVID-19 pandemic, the Kentucky Department of Education has continued to solicit feedback from school districts as to the relief required so that continued education and public health concerns can coexist as we approach the new school year," he said in a statement.

"During a global pandemic when the General Assembly is not in session, school districts must rely upon the emergency authority of the executive branch to ensure continuity, predictability and flexibility to protect the health, welfare and education of Kentucky’s students and school staff. We appreciate that the status quo is being maintained by the ruling of the Kentucky Supreme Court."

Eric Kennedy, director of advocacy for the Kentucky school Boards Association, believes those provisions will be safe even if the governor’s executive orders are overturned given the state education board's action.

“We believe there’s no immediate impact on those two issues of school operations because the regulation process is being used, and for many of the other aspects of things that have come down about COVID and school operations, much of that has been guidance from the department,” he said.

“That gives us some certainty that I don’t believe has been disrupted in any way or affected by these court rulings,” he said.

The Kentucky General Assembly passed a relief bill that included similar provisions for the 2019-20 school year as districts transitioned to nontraditional instruction at the Beshear's recommendation in March.

School workers could be affected in other ways if Beshear’s executive orders are nullified, such as expanded eligibility for workers’ compensation and unemployment insurance, Kennedy said.

“There are other issues that might be affected in this litigation, but the most important things that are really in front of school district leaders now would be those two issues of NTI days and funding calculations,” he said.

In Louisville, Hair 502 owner Catherine Stevens said she would have kept her salon's safety guidelines in place even if Beshear's orders had been overturned Friday.

“People could have it and not know it," she said of COVID-19. "I certainly wouldn’t want to get it, let alone if I were to get it and give it to someone else by not wearing a mask.”

She said stylists should continue to keep safe practices like wearing personal protective gear because they are in such close proximity to clients.

Stacy Roof, president and CEO of the Kentucky Restaurant Association, also said she had concerns about a sudden change in how restaurants operate.

"You can't just turn on a dime and say we're going to completely do something different than we've done for 4 or 5 months at this point in time," she said. "There are a lot of factors I would just urge restaurants to use caution."

Cameron, who had intervened in a lawsuit initially about COVID-19 restrictions on the Florence Speedway and a day care in Boone County, filed a motion Thursday in a local court there arguing that the governor’s actions statewide are “arbitrary,” exceed his authority under the law and violate the state constitution.

Among other things, Cameron alleges that Beshear failed to list the "precise emergency" facing Kentucky.

Beshear said Friday that lawsuit between the state's attorney general and the governor typically land in Franklin County Circuit Court.

"This was a case that started about a racetrack believing they should have a higher capacity. I get a lawsuit on that," he said. "We can argue back and forth. But at the end of the day, my hope is the end of that lawsuit -- if it changes capacity -- still has all the other rules, restrictions, etc., in place."

Beshear said that after Cameron intervened, the case morphed, with lawyers for the attorney general issuing subpoenas for the state's Labor Cabinet secretary about unemployment and questions about abortion for Dr. Michael Stack, the state's chief health officer.

"It's really bizarre. It's really unusual," the governor said. "But that creates a record for when it does go up on appeal. We're going to be able to point all of those different things out."