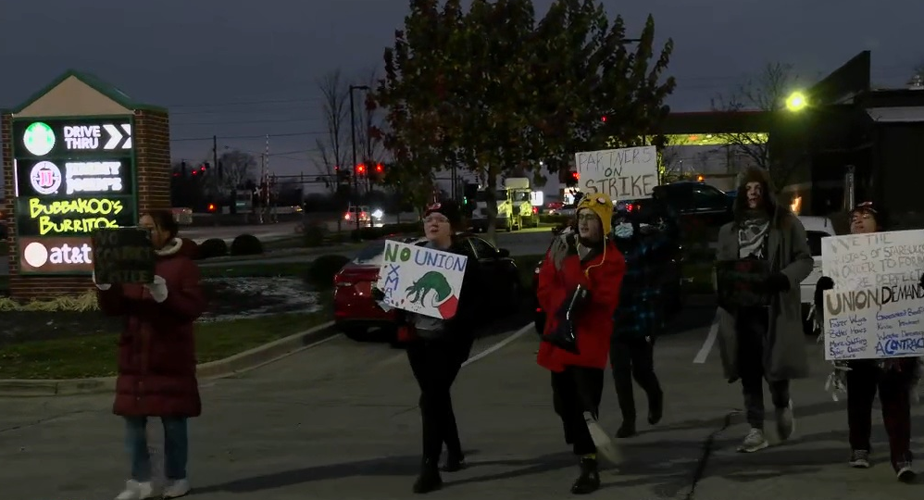 This image taken from video dated Nov. 17, 2022, shows Starbucks employees picketing at the Starbucks at 12911 Factory Lane in Louisville, Ky., protesting working conditions and calling for company officials to come to the bargaining table. (WDRB photo) 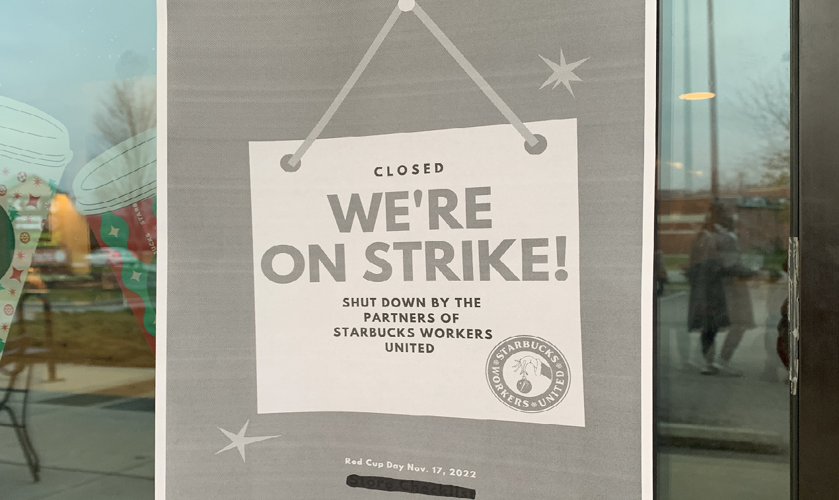 This image taken from video dated Nov. 17, 2022, shows  a "Closed" sign at the Starbucks at 12911 Factory Lane in Louisville, Ky. Workers there protesting working conditions and calling for company officials to come to the bargaining table. (WDRB photo) 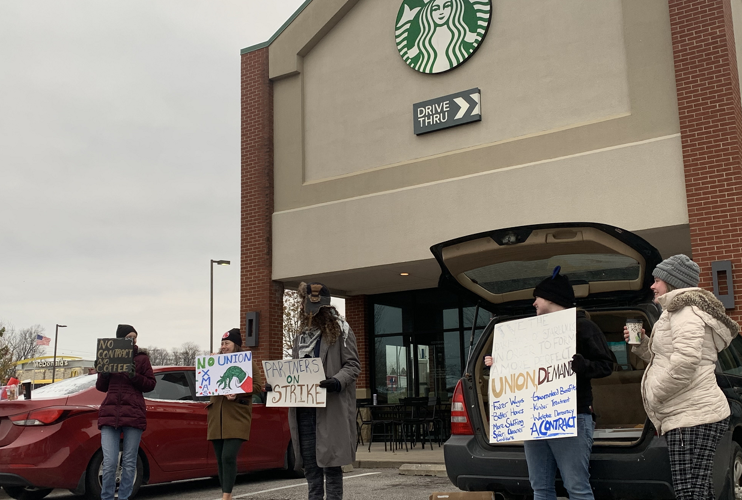 This image taken from video dated Nov. 17, 2022, shows Starbucks employees picketing at the Starbucks at 12911 Factory Lane in Louisville, Ky., protesting working conditions and calling for company officials to come to the bargaining table. (WDRB photo)

Starbucks customers in Louisville have mixed reaction to picketing workers

The employees decided to strike on Red Cup Day.

LOUISVILLE, Ky. (WDRB) -- Starbucks coffee drinkers  who showed up Thursday morning for a cup at the Factory Lane location were met by employees with megaphones and a message as local workers took part in a nationwide strike they're calling the "Red Cup Rebellion."

About a dozen workers with signs reading "No Contract No Coffee" and other messages formed a line at the Starbucks at 12911 Factory Lane off Old LaGrange Road near the Kentucky Truck Plant. A sign in the window reads: "CLOSED WE'RE ON STRIKE. Shut down by Starbucks Workers United."

Employees there said they're joining more than 100 stores nationwide participating in the strike. The strike coincides with Starbucks Red Cup Day, when the company provides customers' drinks in reusable red holiday cups with Starbucks branding.

"Today, we are out here protesting Starbucks on Red Cup Day because (we want) to get them where it hurts, get them with their money," Mollyn Lipowsky said. "Right now, we're protesting, because, despite already having the contract negotiations last month, within two minutes of us sitting down at the table, Starbucks had already walked out. So they didn't hear our demands, any of our pleas. And we think that's abhorrent."

Reaction has probably been mixed from those attempting to go through the drive through or buy a cup of coffee this morning.

The strike is in response to what the union is calling unfair labor practices. Union workers said stores are understaffed, workers are underpaid and endure inconsistent schedules, and the company overall disregards its employees.

Customers who arrived to find the closed store with a picket line Thursday had mixed reactions.

Another customer disagreed. "No, I won't support this because I think Starbucks offers lots of perks for people working.

Still others, like Elishia Durrett Johnson, were proud of the group for taking a stand. "Getting out and making sure that you are advocating for yourself, and that's the whole point here. I'm very proud of these young people."

Lipowsky says she's fighting not just for herself but for her Starbucks family.

At least 257 Starbucks stores have voted to unionize since late last year, according to the National Labor Relations Board. Fifty-seven stores have held votes where workers opted not to unionize.

Starbucks Workers United represents over 260 locations accounting for close to 7,000 workers in the country, according to a news release.

Stores in 25 states planned to take part in the labor action, according to Starbucks Workers United, the group organizing the effort. Some workers planned to picket all day while others planned shorter walkouts. The union said the goal is to shut the stores down during the walkouts.

The Seattle coffee giant has more than 9,000 company-owned stores in the U.S.

The union is now asking Starbucks to come to the bargaining table to restart negotiations.

We reached out to Starbucks for comment, and a Starbucks spokesperson told us they respect the protests and are willing to return to the bargaining table in good faith.

Below is the the company's official statement:

Employees at the Factory Lane location said they plan to continue the picket line until 9 p.m., the store's normal closing time.