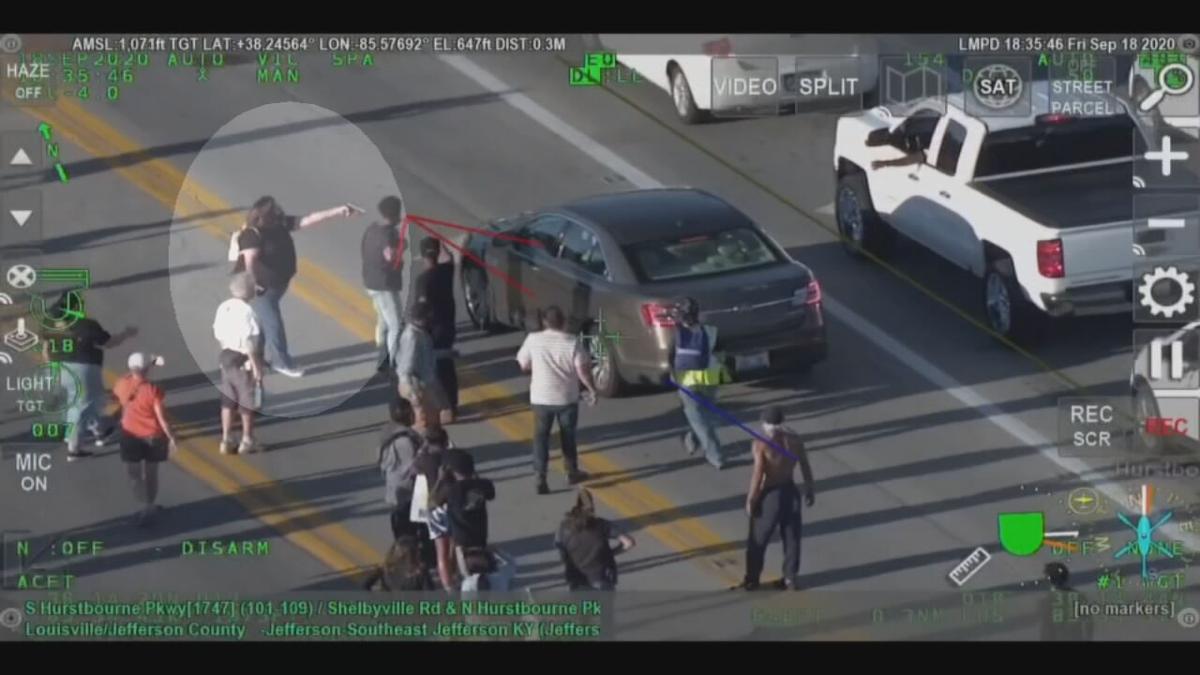 (Courtesy of video from the Louisville Metro Police Department) 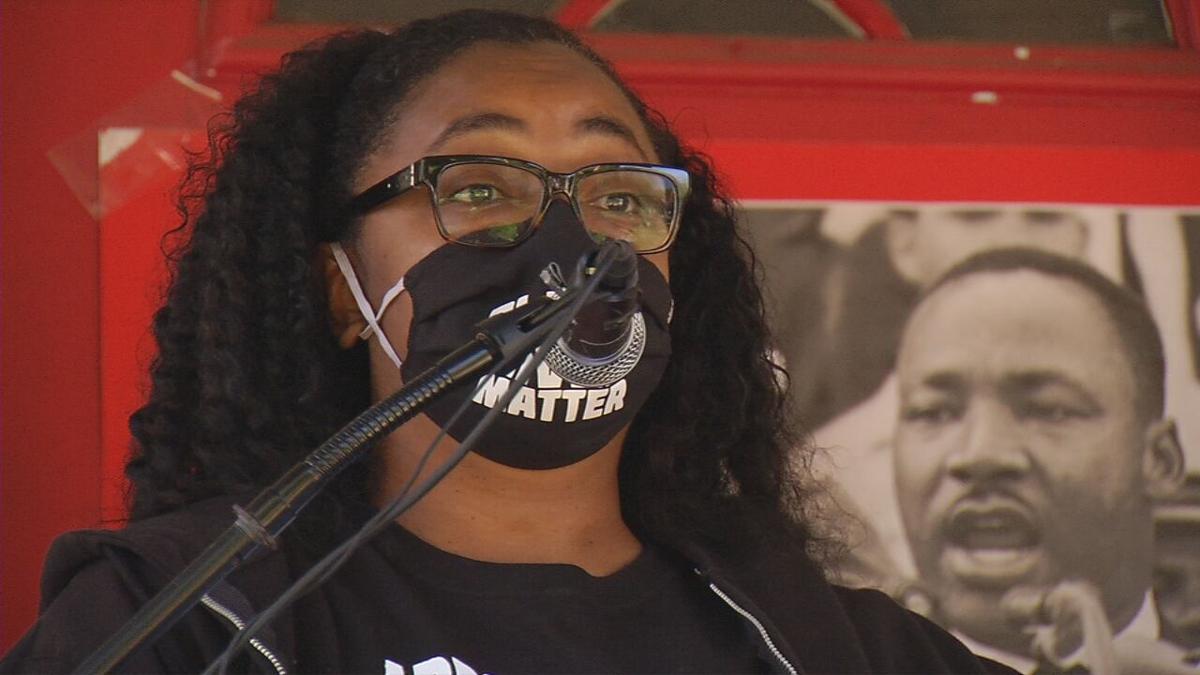 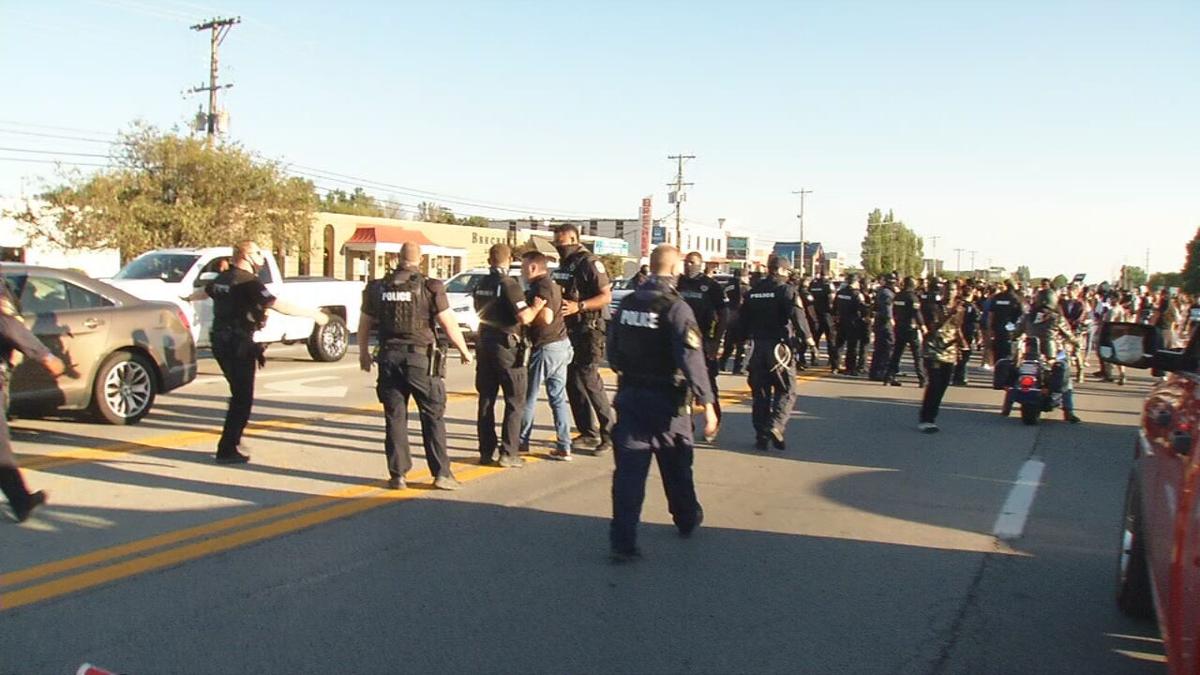 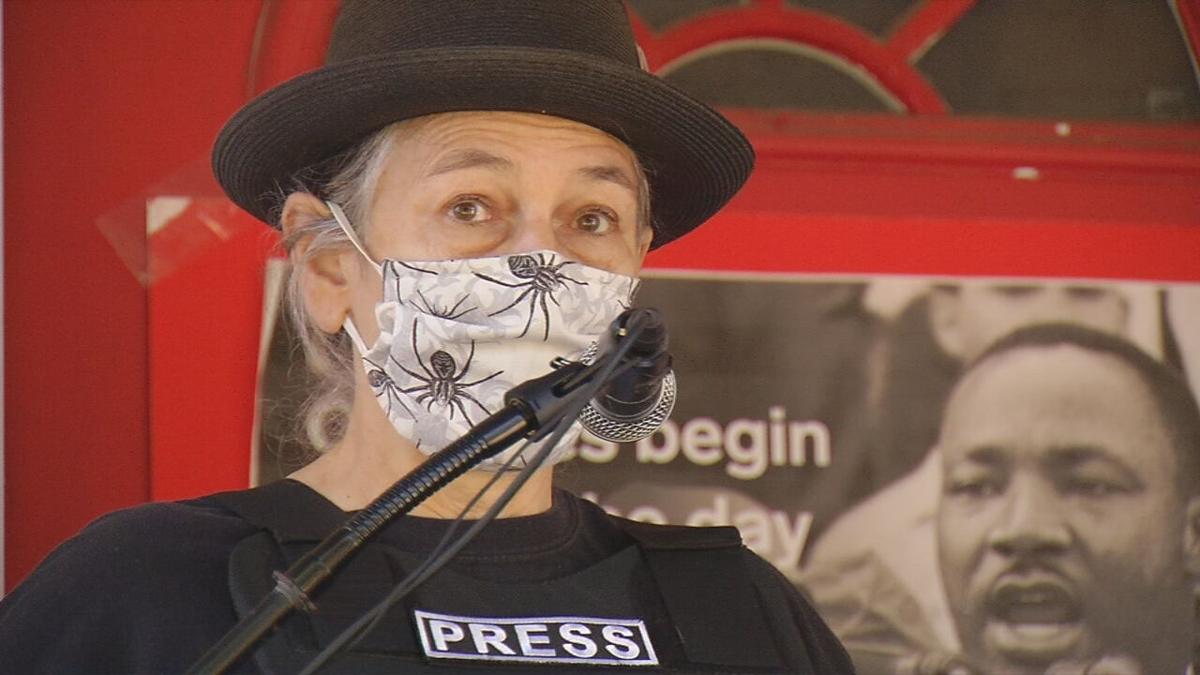 This story originally reported that Louisville Metro Police charged Robin Marie Crandal Ash with possession of a handgun by a convicted felon, as it appeared in the department's arrest report from Sept. 18, 2020.

Ash had her rights restored when she received a full pardon from former Kentucky Gov. Steve Beshear on Dec. 7, 2015, according to documents provided by Jefferson Commonwealth's Attorney Tom Wine.

LOUISVILLE, Ky. (WDRB) -- A woman was arrested for pointing a gun at a man driving down Hurstbourne Parkway during a protest march Friday evening, but individuals who were near the incident as it unfolded said the man in the car pointed a gun at demonstrators first.

Louisville Metro Police on Saturday released video footage from a police helicopter circling over the march that shows a woman, who has been identified as Robin Marie Crandal Ash, pointing a gun at the driver of a dark gray Ford Taurus. Ash is facing charges of wanton endangerment and criminal mischief, according to court records.

Police originally reported that Ash had been charged with possession of a handgun by a convicted felon, but she received a full pardon from former Kentucky Gov. Steve Beshear on Dec. 7, 2015, according to documents provided by Jefferson Commonwealth's Attorney Tom Wine in December.

On Sunday morning, protesters who attended the march came to Ash's defense, saying she pointed her gun at the man in self-defense after he pulled out a gun and pointed it at demonstrators near his car.

"This man, whose name I do not know, was allowed to leave the scene after he threatened dozens of protesters with his gun," said Tyra Walker, the co-chair of the Kentucky Alliance Against Racist and Political Repression.

"What do you do when somebody threatens you with a gun? You know, you run or you defend – fight or flight," added Sheri Wright, who filmed the march and posted video of the incident on her Facebook page. "So I’m not going to knock anyone who felt her life was threatened, because I certainly felt my life was threatened, as did everyone there."

LMPD’s helicopter video, which contains no audio, begins with a wide shot of protesters who had gathered for a rally at Kentucky Attorney General Daniel Cameron’s office marching down Hurstbourne Parkway. Moments later, the Ford Taurus heading the opposite direction as the march pulls into a turning lane and comes to a stop near protesters.

Several people approach the car before a woman walks over and pulls out a gun and points it at the driver. After walking away from the vehicle, the woman appears to hand the gun to someone walking next to her in the street.

The video shows more protesters gathering on the driver’s side of the Ford Taurus after the woman walks away. One person appears to kick the car while other protesters try to usher the crowd away from the vehicle and back into the march.

"Black leadership defused that situation," Wright said. "They once again buffered themselves in between protesters and this man who had a gun and was pointing it at everybody."

LMPD’s video shows the Ford Taurus drive a few feet down the road before coming to a stop again. The man exits the car as police gather around the vehicle and protesters continue to move forward.

In a statement, LMPD Sgt. Lamont Washington said the driver was not arrested because he was a victim in the incident.

"LMPD released the video to show the whole story," he said. "A still photo or single angle often doesn’t do that. No charges are expected of the driver whose name will not be released since he was the victim."

A WDRB News crew at Friday's march did not witness the initial exchange between protesters and the driver but captured video of LMPD officers walking the man to his vehicle before following the march down Hurstbourne Parkway.

During a new conference Sunday at the Kentucky Alliance, Wright said the man driving the car "tried to run over protesters." Her video shows the Ford Taurus drive closely past at least two people marching in the street before coming to a stop.

As Wright approaches the car, video shows the man behind the wheel pulling out a gun and pointing it at the demonstrators near his car. Ash is not seen approaching the car in Wright’s video, which is focused on the driver's window.

Wright follows the car as it moves a few feet down the road, and her video shows the man get out of the car and again point a gun at protesters as he inspects a dent in his vehicle. The man then gestures in the direction of police, who are seen moments later moving the crowd away from the vehicle.

Wright said the police "surrounded themselves around this man and his vehicle in a protective fashion."

"It seems very one-sided as far as where LMPD interjects itself into a conflict," Wright said. "From my observation, they want to protect the people who are opposed to the protesters against police brutality. I’ve seen this over and over and over again."