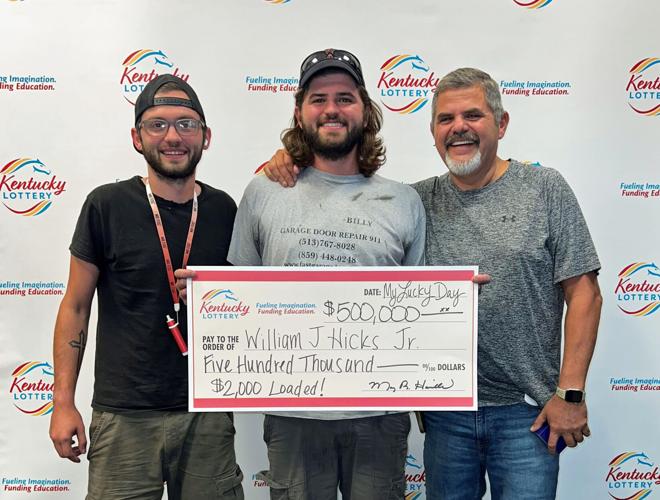 LOUISVILLE, Ky. (WDRB) -- A northern Kentucky family is a half-million dollars richer thanks to a scratch-off ticket.

William owns a garage door repair company where both of his sons work. The brothers ride to work together and stopped at a Speedway station in Alexandria on Friday morning. Each bought a scratch-off ticket.

“I’ll usually scratch one and he’ll scratch one,” William Jr. said. “Stephen suddenly tells me we’d won $500,000, but I figured he was looking at it wrong. We must have looked at it 40 times, and I asked to be pinched a few times,” he said.

The best part was calling their father with the news. “Dad, you’re not going to believe this. We’ve just won a half a million dollars,” William Jr. said. Their dad said his son spent several minutes trying to convince him of their good fortune.

Father and sons made the trip to the Kentucky Lottery headquarters in Louisville Friday afternoon. After taxes, they each received a check for $118,333.33.

Stephen told officials that he needed tires for his truck and the day before had bought just one because that was all he could afford. “Now, I’m going to buy a truck.”

William Jr. says he plans to pay off his mom’s mortgage and help his grandmother. As for the dad, he has been renting a farmhouse and is looking to buy the property.

The Speedway will receive a $5,000 bonus for selling the winning ticket.

BOZICH | How many runs are right number for Louisville QB Malik Cunningham?