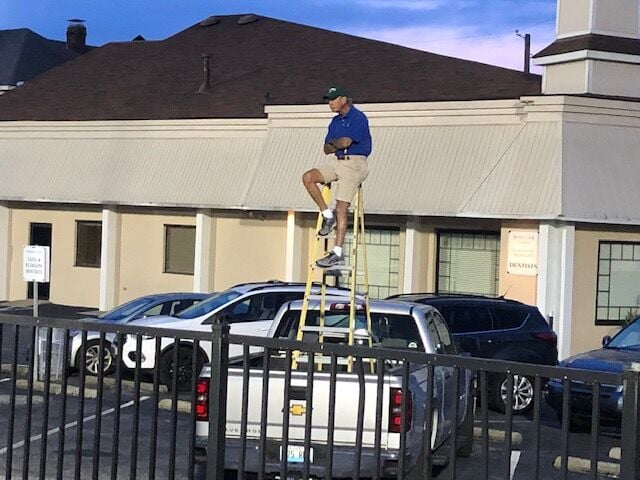 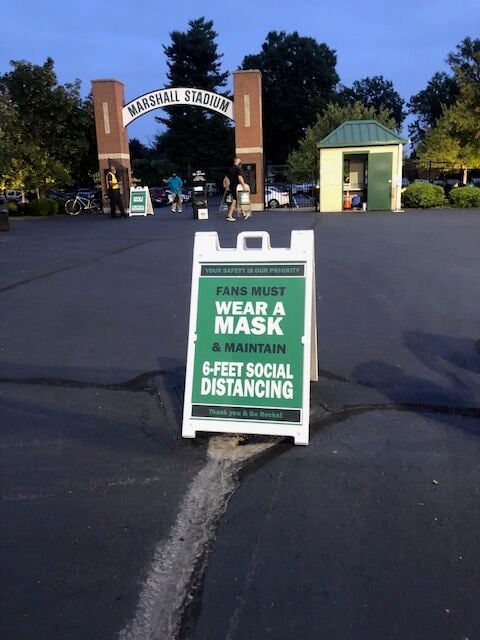 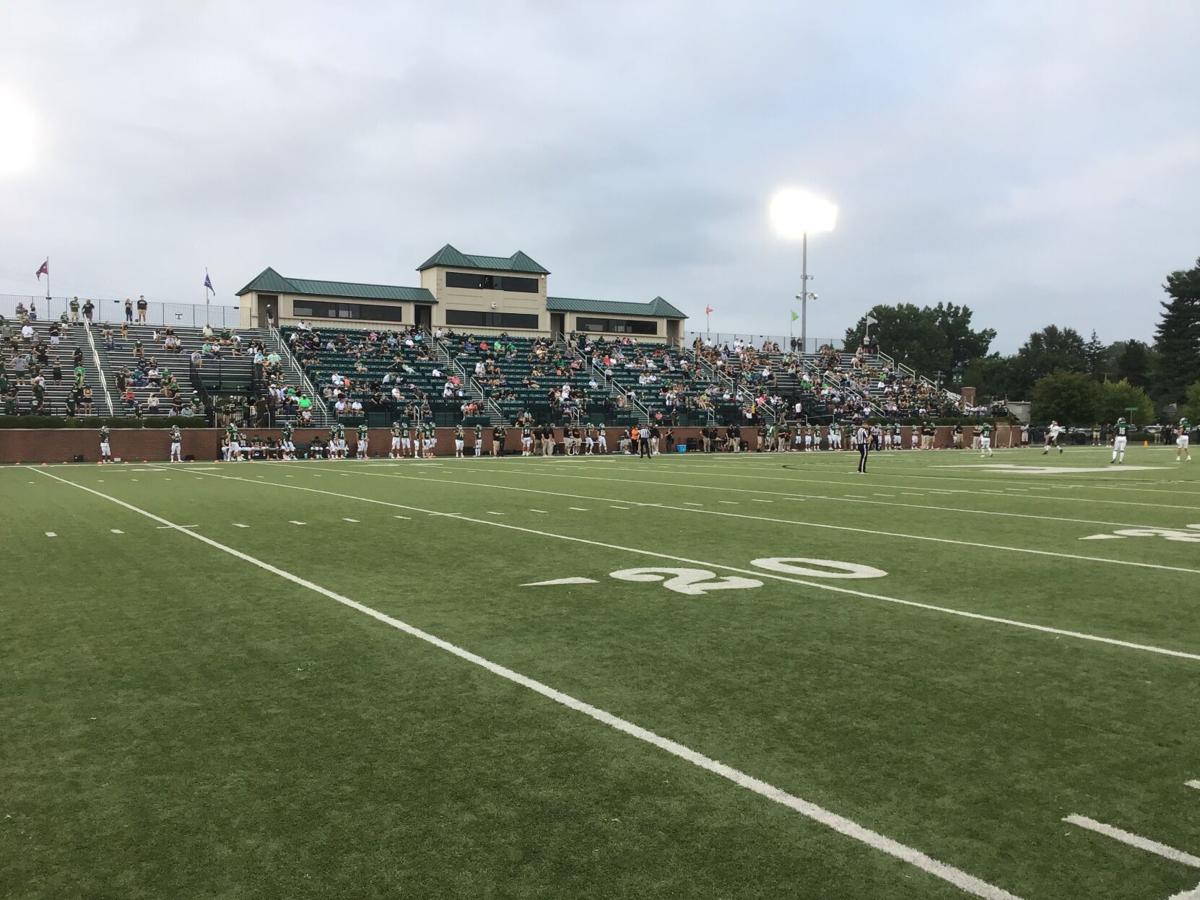 Instead of the usual 5,000 or so fans, Trinity limited the crowd to 1,200 Friday night. Rick Bozich photo. 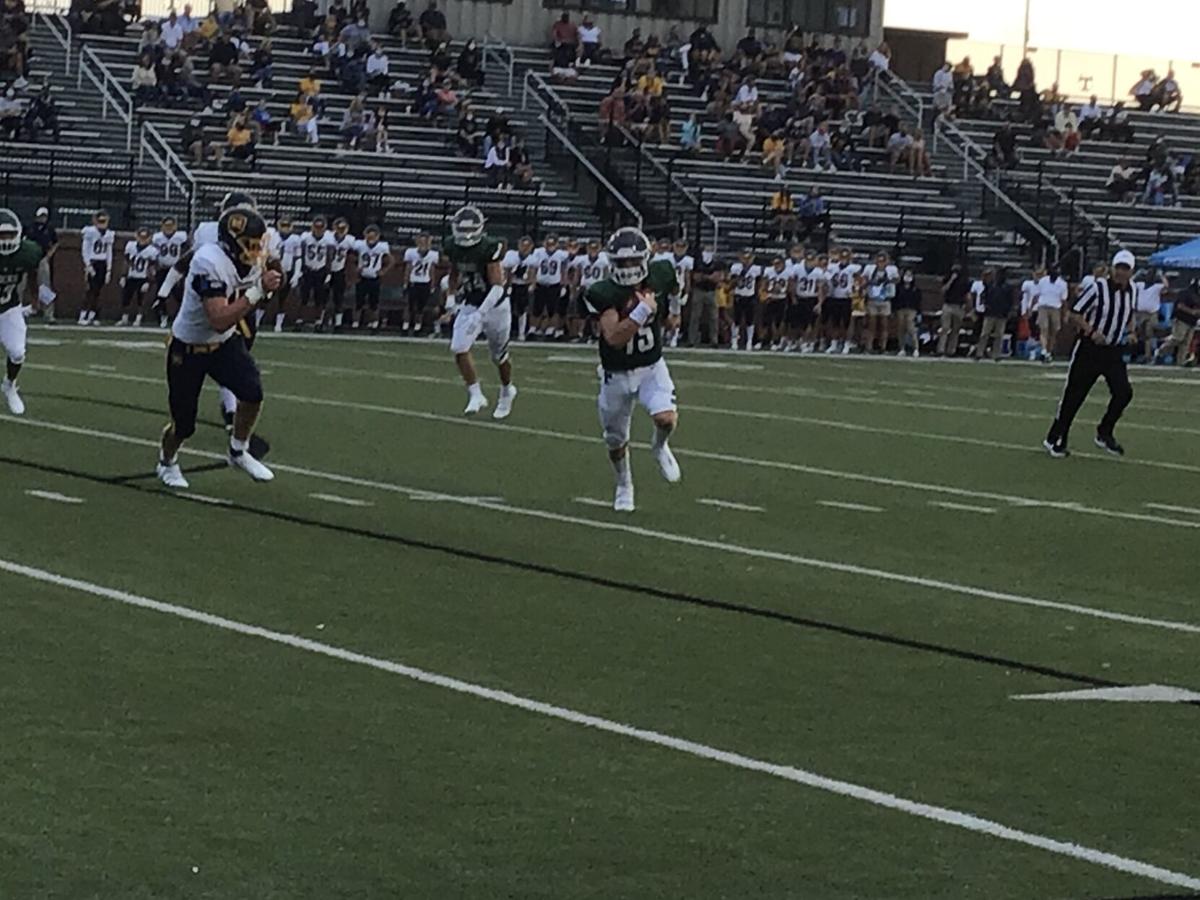 Trinity quarterback Nathan McElroy ran for a first down on the Shamrocks opening drive against Cincinnati Moeller. Rick Bozich photo. 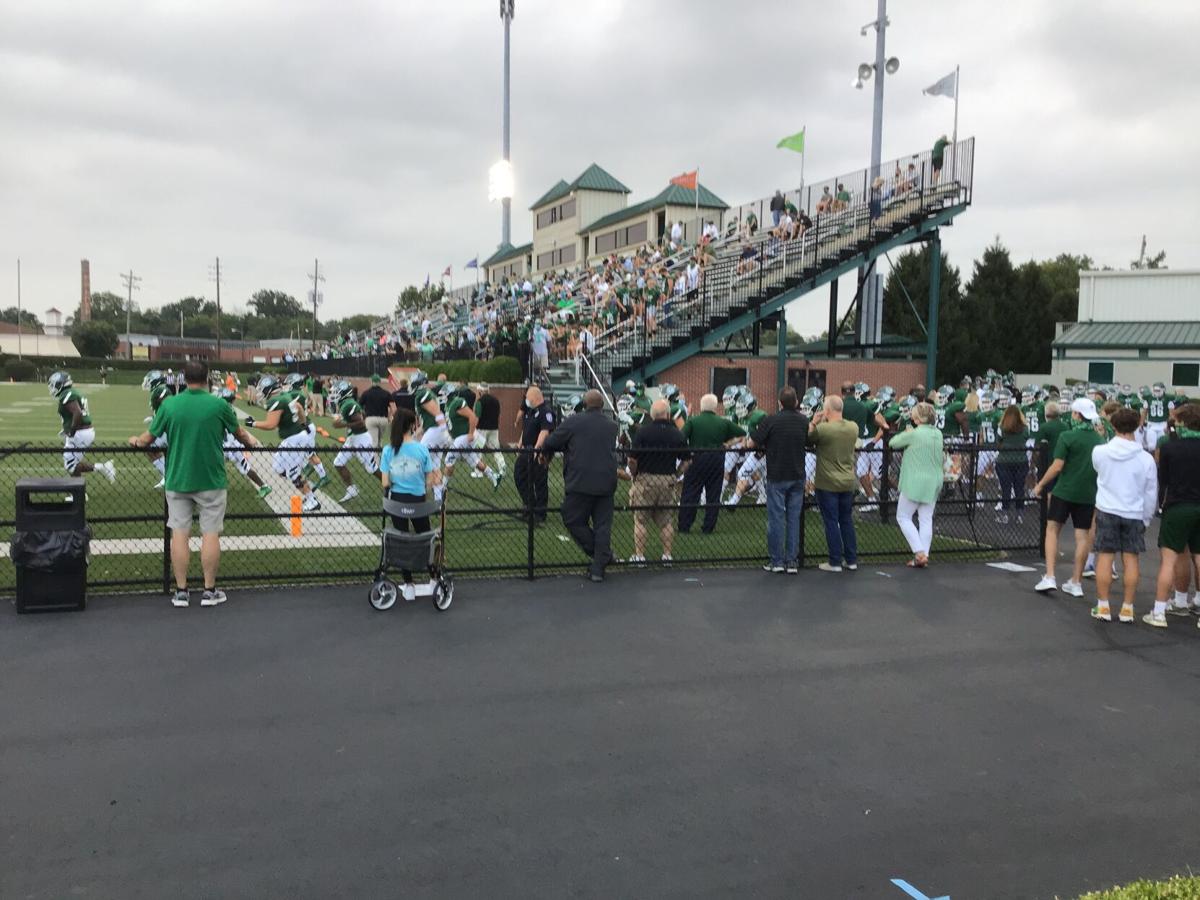 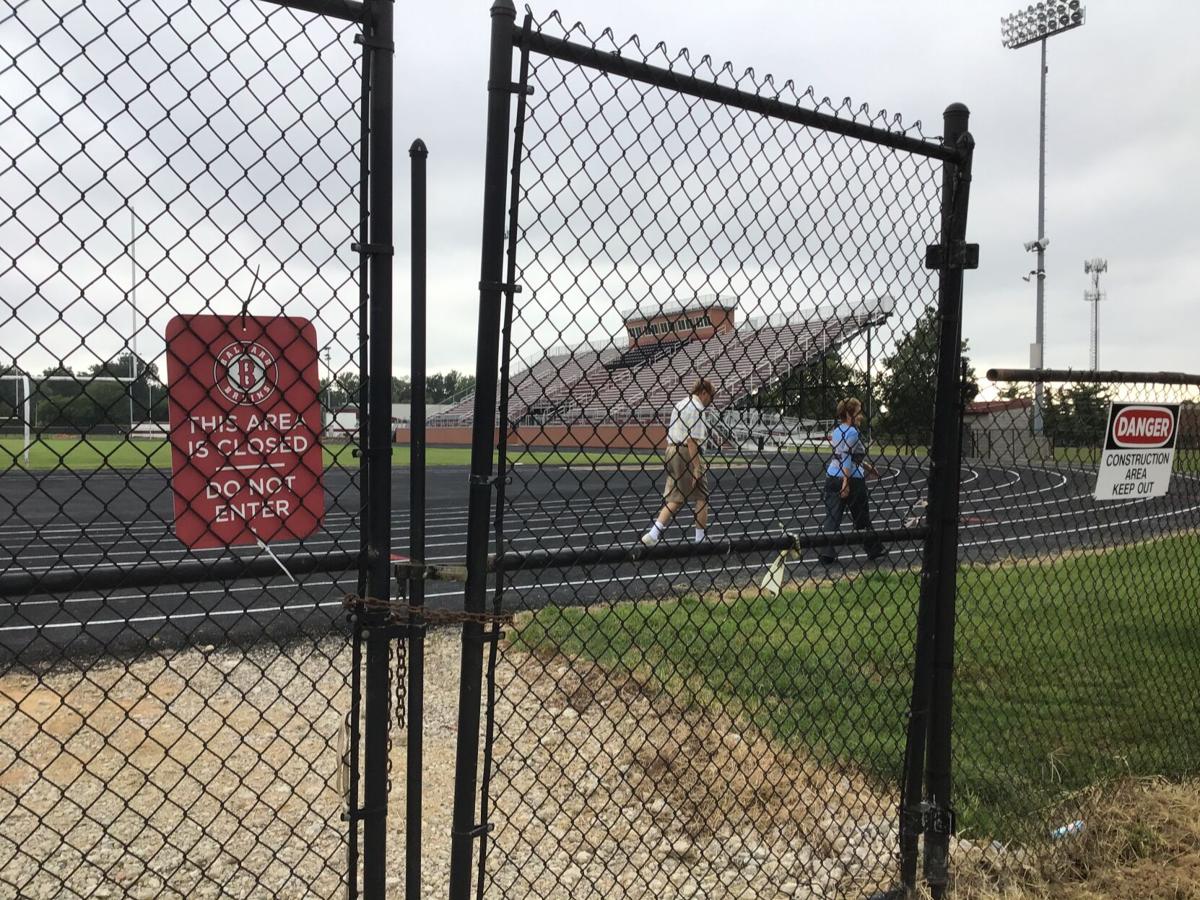 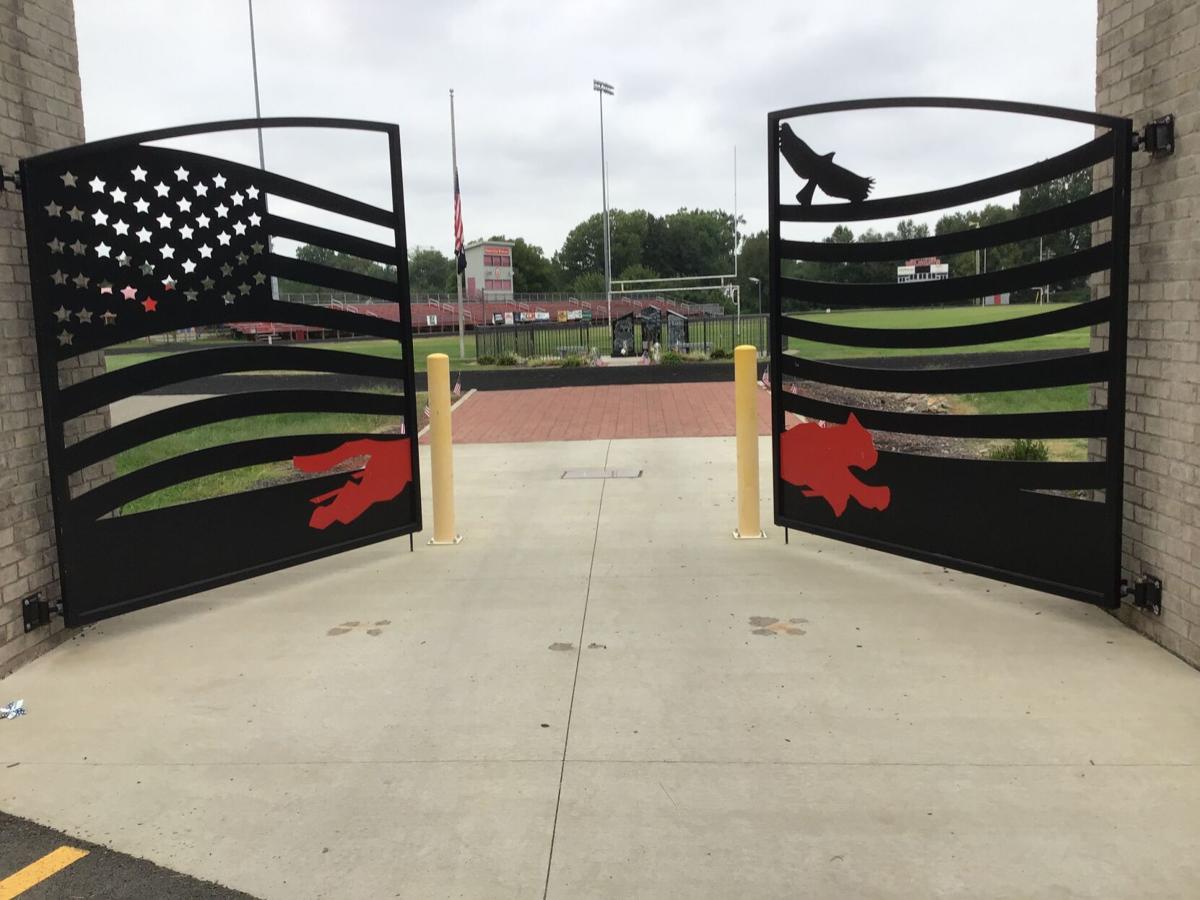 Instead of the usual 5,000 or so fans, Trinity limited the crowd to 1,200 Friday night. Rick Bozich photo.

Trinity quarterback Nathan McElroy ran for a first down on the Shamrocks opening drive against Cincinnati Moeller. Rick Bozich photo.

LOUISVILLE, Ky. (WDRB) — Denney Sheridan is 71 years old. He is retired from General Electric, where he worked as an engineer. Sheridan started following the football team at Trinity High School long before he graduated from the school in St. Matthews in 1968.

But Friday night, when Trinity opened its 2020 high school football season against Cincinnati Moeller at Marshall Stadium, Sheridan had a problem.

“I couldn’t get a ticket,” Sheridan said.

Instead of the usual 5,000 or so typically stuffed into the facility, the crowd was limited to 1,200 because of the novel corona virus.

Family members, students, staff members and some season ticket holders. Sheridan did not check any of those boxes.

But this is a fan who would obsess about watching the powerful Shamrocks even if they weren’t ranked the No. 15 team in America by MaxPreps.

There is photographical evidence with this column to prove that Sheridan increased the crowd to 1,201.

He placed a yellow, 8-foot aluminum step ladder in the back of his Silverado pick-up truck and drove to the parking lot outside the berm on the West side of the stadium Friday evening.

Wearing khaki shorts, a blue polo and his green Trinity baseball cap, Sheridan unfolded the ladder in the truck bed, secured it with a rope on both sides and climbed to the top step.

That’s where Sheridan sat for every snap of Trinity’s thunderous 44-7 win over Moeller.

One of the hard workers was Trinity quarterback Nathan McElroy, who completed 13 of 19 passes for 145 yards and two touchdowns, while also running for another.

McElroy and the rest of the Trinity offense was so crisp in its first-half execution that the Shamrocks led 37-0 with nearly 2 minutes to play in the second quarter, which meant the rest of the game was played with a running clock.

But after the game, when I showed McElroy a picture of the work Trinity’s 71-year-old Superfan put in so he could watch the Shamrocks play, McElroy celebrated as if he had thrown another touchdown pass.

“I don’t even know what to say about that,” McElroy said. “That’s incredible.”

So it went on a night when high school football returned — sort of — in Jefferson County.

I tossed that qualifier in because the Jefferson County Public Schools will not join the competition until next week. JCPS programs will scrimmage each other Saturday in front of only several hundred fans.

Before I drove to Trinity, I stopped at Ballard, where the refurbished stadium sat empty except for a couple walking laps on the track. Ditto for Waggener, where tiny American flags lined the walkway to the field as several joggers worked out.

How strange was the scene? Coaches were masked up on the sidelines. Hand sanitizer sat on training tables near water bottles.

After 48 minutes of knocking each other to the ground, the Trinity and Moeller players were reminded to leave the field without a post-game handshake line.

How strange has the preparation for this season been?

“I don’t think I’ve drawn up a football play since last season,” said Scott Carmony, the head coach at duPont Manual High School. “There’s a lot of other balls in the air.”

Example A: On Friday afternoon Carmony learned that he had to rework the bus manifest for the 2.8 mile trip his team will take to play at Central Saturday night.

Five buses will be required to get the 60 players to the scrimmage because of concerns about COVID-19.

“It’s been a long build-up to get to this point,” Carmony said. “Every kid on our team is excited about playing.”

Remember: Players started conditioning for this season in mid-June. They’ve only been blocking and tackling for several weeks.

For several months there was only running, weight-lifting, running, stretching, drills and more running.

There was one other thing: Genuine concern the season would be bumped into the winter or spring — or be canceled.

There were a thousand points when the Friday game could have pushed into the CANCELED pile. Moeller had to agree to juggle its schedule and bump the game back a week while playing it in Louisville instead of Cincinnati. That was a major concession, considering Ohio teams have been limited to six regular-season games.

The Louisville private schools decided to start on the first week approved by Kentucky Gov. Andy Beshear. But a string of positive tests could have shaken Trinity’s roster.

Trinity coach Bob Beatty considers himself “a science guy.” That explains why he said it was reasonable to consider it “strange” that the Shamrocks were playing football during a period when students were attending classes two days a week.

Like McElroy, Beatty had moments when he wondered if there would be any blocking and tackling this season.

“Right before we started workouts June 15 and the numbers with COVID kept going up I didn’t feel like we would have one at all,” Beatty said.

“Then things gradually started getting better.”

Things improved to the point where football was played Friday night with 1,200 fans in Marshall Stadium — and one 71-year-old Trinity High School Superfan sitting on an 8-foot yellow ladder in the bed of a pickup truck in the parking lot outside the field.

Next Friday, Trinity is scheduled to play Game No. 2 against Male High School. Will Denney Sheridan return to his spot outside the berm to watch his beloved Shamrocks?