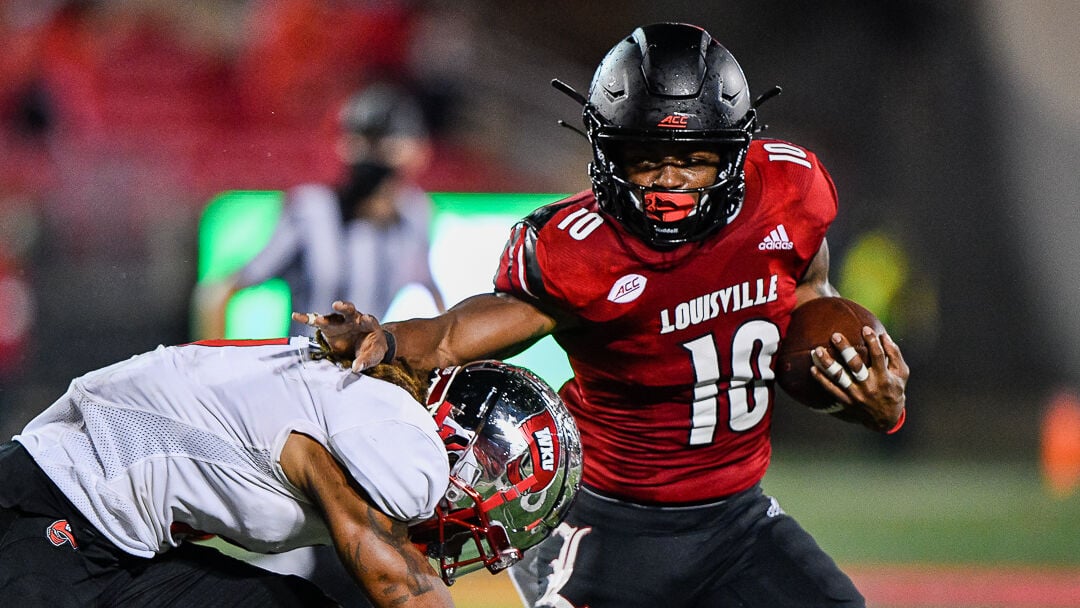 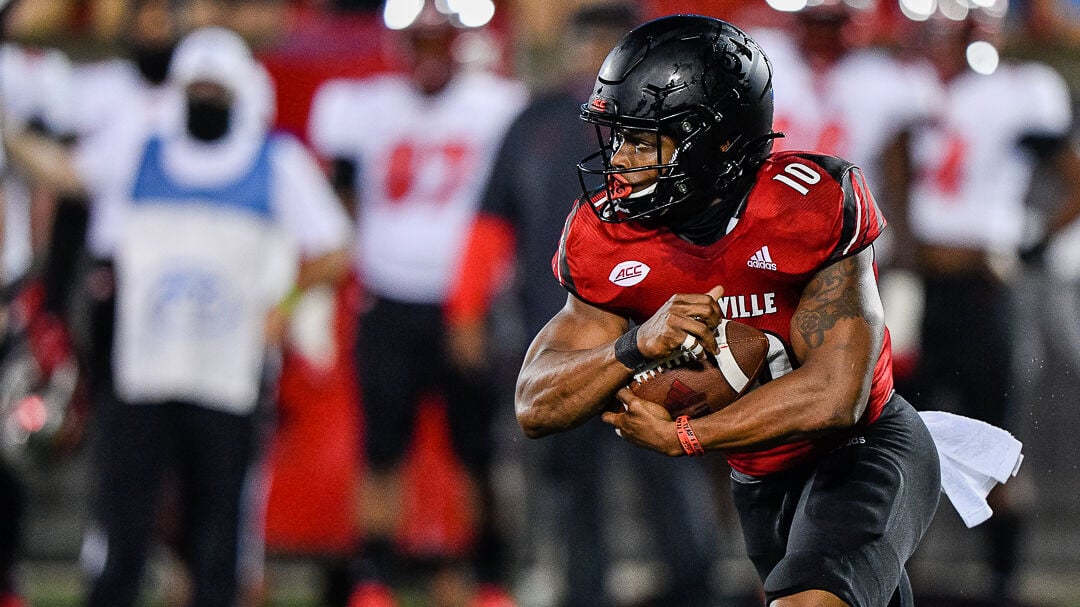 LOUISVILLE, Ky. (WDRB) – You can’t give away a touchdown on half of your punting attempts. That’s the kind of expert analysis to expect in the following paragraphs. The University of Louisville bat WKU 35-21 in the season-opener for both teams on Saturday.

In reality, this was a two-touchdown win that probably should’ve been a four-touchdown win. WKU’s TD drives were 1, 4 and 37 yards. When WKU got the ball in its own territory, it got nothing.

Unfortunately, the Louisville punting game on Saturday left you wondering if the Cards will be able to pin teams in their own territory very often. Regardless – let’s look at some takeaways from this game.

1). THE BIG PLAY IS BACK. Louisville was very much a big-play offense a season ago, and is again this season. Micale Cunningham completed 3 passes of longer than 40 yards. There were four plays of longer than 40, and they fueled 4 of Louisville’s 5 TD drives.

WKU had preseason All-American Tutu Atwell pretty well bracketed, but Cunningham has other weapons, like Dez Fitzpatrick and Braden Smith, whose 110-yard debut was the first 100-plus yard debut for a Louisville wideout since Deion Branch 20 years ago.

As a result of big plays, Louisville had four drives of 85 yards or longer. What the Cardinals still need to develop is a bit more punch in the short play department. The big play won’t always be there, and when they couldn’t hit downfield in the second half, the offense stalled at times.

The Cardinals also need to watch out for negative yardage plays. While Scott Satterfield is right, with its big-play ability this offense never feels as if it is behind the sticks, giving up the 10 tackles for loss against WKU on Saturday is too many, and it makes the play-calling more predictable.

In straight-ahead running situations, the absence of Mekhi Becton could be felt, though the Cardinals did begin to create some seams for Hassan Hall and Javian Hawkins as the game went on.

Expect opposing defenses to do more of the same against Louisville – stack the box against the run and look to put heavy pressure on Cunningham. The Cardinal offensive line did a good job of protecting him, and if it can do that, he should be able to make other teams pay.

2). ALL RIGHT, THE PUNTING. The first miscue was a simple mishandled snap. The second was a blocked punt. If not for those, we’re talking about a pretty complete performance for the Cardinals.

But because of them, we’re talking about an outright concern. In fact, the Cardinals went for a fourth down in the third quarter where they otherwise might’ve tried to pin WKU deep, and you wonder how much that had to do with the two botched punts.

“We’ve obviously got a lot of things to work on to get better,” he said.

3). MONTY MONTGOMERY. Remember his name. He’s not a starter at linebacker, but when inserted in passing situations, he adds a dimension to the Louisville defense. On Saturday, he had five tackles, four of them solo, three behind the line of scrimmage, including two sacks.

“Now Monty's a big play defense guy,” Satterfield said. “He’s not the tallest linebacker but he’s extremely explosive. He’s got probably the best bend on our defense. When rushing the passer, he can get about three feet off the ground, he’s running full speed and the tackles have a hard time blocking him. He did a tremendous job tonight. There was a big-time attacker for loss on a running back. He pressured the quarterback and sacked the quarterback two or three times. He had a really impactful game. We were really pleased to see that out of him. Dorian (Etheridge) and CJ (Avery) are our starting linebackers, but we have ways to get him in the game, we have packages to get him because he’s such a dynamic playmaker. I think he could really have a big year for us, particularly in the pass rush game.”

Etheridge led the team with 8 tackles and had 3.5 for loss, which ties him for the nation’s lead after one game.

4). DEFENSE, PART II. Louisville allowed only one third-down conversion after halftime and gave up just 182 yards in the first three quarters. As happened a year ago, the defense might’ve tired a bit late, likely a factor of depth. But it was as solid a full-game defensive performance against an experienced offense as Louisville has put up in some time.

The defense committed just one penalty in the game, a pass interference call in the third quarter, and glaring assignment errors were far fewer than in past seasons, all a function of a team that is comfortable in its scheme.

Louisville’s 10 tackles for loss matched the most it had in any game last season.

“I thought our defense came out and played outstandingly tonight,” Satterfield said. “We put them in a bad situation a few times and they played a great game. They did a great job on third down to get off the field, only gave up maybe a couple of the big chunk plays. It was just a really good effort.”

5). RUNNING GAME. It’s no secret, Satterfield wants to run the football. It is the offensive goal No. 1 and 1A. WKU came in determined to not let that happen. It packed the box, and did so with a defense that isn’t shabby. As Satterfield pointed out, a couple of those guys will hear their name called on NFL Draft Day, led by DeAngelo Malone.

Still, Louisville managed 144 rushing yards on 38 attempts. That’s a paltry 3.8 yards per attempt. Considering the Cardinals rushed for 114 yards on 11 carries in the second quarter, you realize that for three-quarters of Saturday’s game, they couldn’t establish much of anything on the ground.

The concern level on that is tough to gauge. Javian Hawkins found some running room in the second half and finished with 71 yards on 19 carries. Hassan Hall had 66 yards on 6 carries, aided by a 41-yarder.

The good news for Louisville is that when then run game was taken away, it had options to go to.

“We needed to be able to throw the ball tonight,” Satterfield said. “They were loading up the box to try and stop the run, which they did a good job of that. So we all we've always said if they take that away we have to throw it.

“I thought at times we did really good and other times (on the offensive line) we did not do good. We certainly have things we are going to have to work on. We need to get back and watch the film, there's no question about it. I thought for the most part they did a pretty good job of protecting in the pass game. In the run game, they were loading up the box. There's a lot of guys down there. We will have to see what we can do better. There's some things we can do better. I think, overall, I was pleased.”

'No Time to Die,' the new James Bond film, is delayed once again

'The Muppet Show' is coming to Disney+