LOUISVILLE, Ky. (WDRB) – Louisville Mayor Greg Fischer's office is expressing support for a Kentucky State Police investigation of a police shooting, despite the fact that the agency failed to release body camera footage of the shooting by a 72-hour deadline.

Mayor Fischer had previously said that police body camera footage of Sunday's fatal shooting by a Louisville officer in the city's Portland neighborhood should be publicly released by Wednesday night. But as of 10 p.m. Wednesday, that material had not been released.

The Louisville Metro Police Department has typically released video of shootings, and the officers who fired their weapons, within 24 hours. But, in a policy change, the investigation into the death of 49-year-old Brian Allen Thurman is being led by Kentucky State Police.

The departure from LMPD internal investigations was announced this summer in the wake of the fatal police shootings in Louisville of Breonna Taylor and David McAtee, purportedly to increase transparency and build back public trust of the heavily scrutinized department.

"We’re wanting an outside agency to investigate officer-involved shootings so that there is not an agency investigating itself," Fischer told reporters Tuesday. "That was one of the issues that came out of the Breonna Taylor tragedy."

But while the standard for LMPD is to release available body cam footage of a shooting within a day, Fischer said "we discussed that with KSP and originally they agreed to it, but then they said they were not going to be able to do it because of logistical challenges."

Fischer said the city and state police agreed, in the last month or so, on a 72-hour time frame to release the footage.

"It’s important that this body camera evidence is seen by the community so that they can understand what took place at any given tragedy such as this," Fischer said.

And on Tuesday evening, Fischer's spokeswoman, Jean Porter, further clarified in a statement that the city and state police signed a written agreement on Oct. 20 to give KSP the investigative power for LMPD shootings.

However, Porter said KSP "later advised" the agreement was mistakenly signed and needed more changes that were requested by the Kentucky Justice and Public Safety Cabinet, which oversees state police.

Porter said that agreement called for KSP to meet the city's standard of releasing police body cam within 24 hours of a shooting. But she added, KSP told the city that that timeline couldn't be met in this particular case.

Instead, Porter said, the state justice cabinet indicated the body camera video should be released within 72 hours of the time of the shooting.

Despite Porter's statement Tuesday night, KSP Commissioner Phillip Burnett, Jr., still made no promises of when footage would be released.

"We do not release video footage or specific details until it is safe to do so in the investigative process for witness and officer safety," he wrote in a statement Tuesday evening, which also said that the department can "generally" release such footage within the three-day time frame.

The move to have KSP investigate Louisville police shootings was met with some skepticism, given the state agency's own credibility and transparency issues the past few years.

"To use the term transparency when you are talking about state police is oxymoronic," First Amendment attorney Jon Fleischaker told WDRB News when the move was first announced in late July. "The state police has a history of doing things the way they want to do them, and at least their history in terms of open records and transparency is they don't care."

But others have praised KSP, with Hardin County Commonwealth’s Attorney Shane Young, who worked as a prosecutor in Louisville for a decade, saying the department's unit handling these police shooting is "the best of the best."

While he said he understands KSP "has had their issues," he said there is no better investigative agency in the state than the department’s Critical Incident Response Team, which will handle LMPD shootings.

"It’s exhaustive," Young said of KSP investigations of fatal shootings, saying troopers come in with a PowerPoint, answer questions and "don’t try to push me one way or the other.

"They are very non-biased," he said. "They just give you the facts. That’s what you need."

Attorney Steve Romines, who represents McAtee’s family in a civil lawsuit, said KSP is the "least transparent organization you can deal with," but the objective of bringing the outside agency is about more than how open the agency is with the public.

"I think the goal of it is to have a more unbiased investigation done," he said. "I don’t know if that’s accomplished here. But you can’t do any worse that what we saw in the (Breonna) Taylor case."

So far, there has been little said of what happened to Thurman, who was shot after officers pulled over a car that was reported as stolen around 10:30 p.m. Sunday in the area of 21st and Gilligan streets. Investigators have not said why police fired or why an officer officer was briefly hospitalized.

Early Monday, a KSP spokesman said it was department "policy not to release details of the investigation until vital witnesses have been interviewed and pertinent facts gathered."

In a statement Monday night, a KSP spokesman said body camera video is "generally" released within 72 hours, though there are exceptions, depending on the "complexity of the investigation."

On Tuesday evening, Burnett, the acting commissioner, released a statement saying the two departments exchanged drafts of "Memorandum of Understanding earlier this year that would govern the interaction between the two enforcement agencies" but it has not been signed.

KSP's critical incident response team is investigating the shooting and the department will follow "existing protocols that have been in place since 2017," he said.

Fischer said the city and state police reached an agreement governing investigations of officer shootings "about a month ago." Mayor Fischer's office released the initial agreement Tuesday night but KSP and LMPD are still making changes to it. 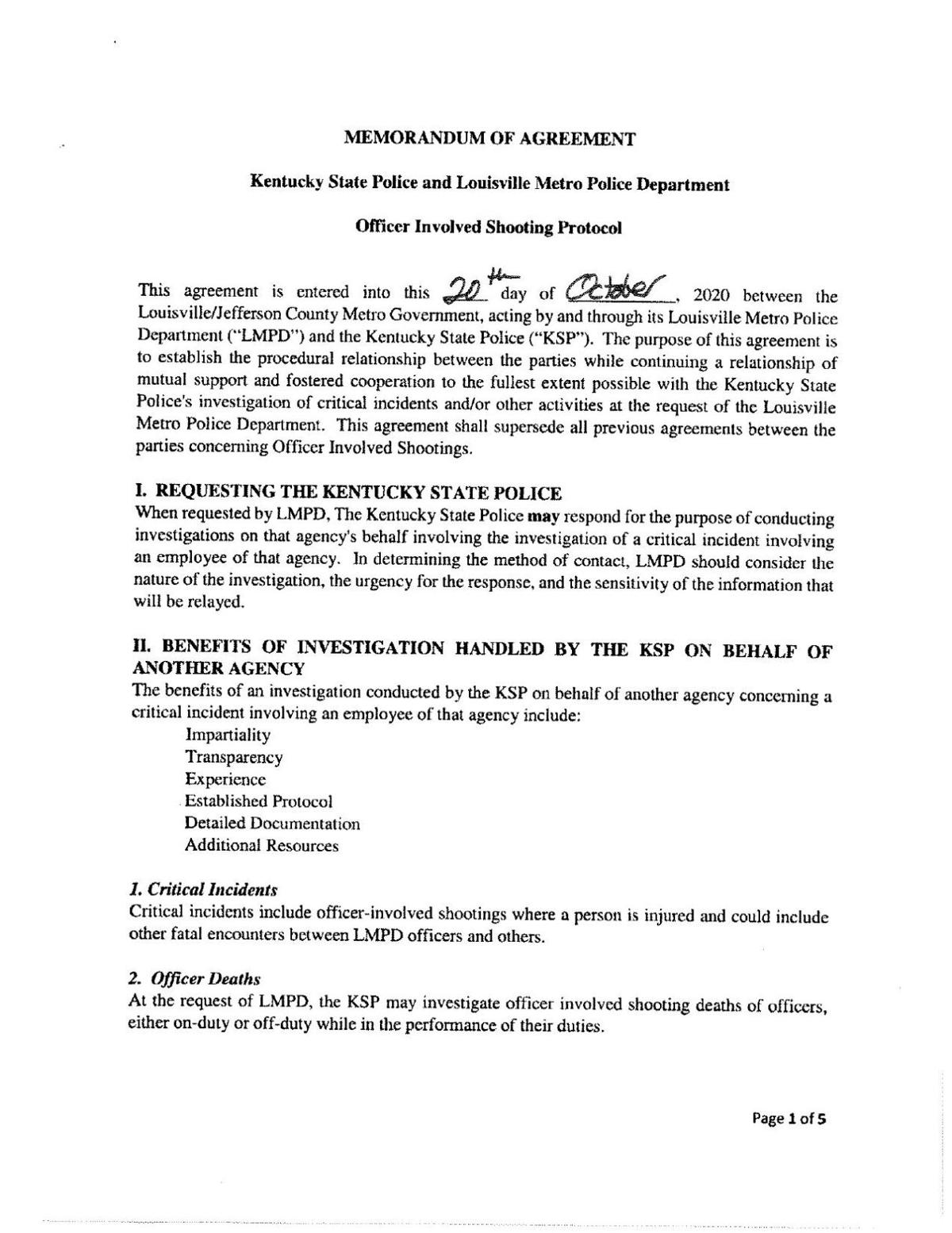 When a final agreement is reached, Burnett said in a statement that it will be released when it is signed by both departments.

The plan has been in the works since late July, as protests grew and the city came under nationwide scrutiny for the shootings of Taylor and McAtee.

Then-Police Chief Steve Conrad was fired after Fischer learned that police officers did not record body-camera footage of the fatal shooting McAtee, a black man, in western Louisville on June 1.

An LMPD officer involved in the March 13 raid of Taylor’s home failed to turn on his body camera before police shot her. The city has said other officers involved in the raid were part of a unit that does not typically wear body cams.

"Our priority is ensuring the public has confidence in the investigation, and that’s why we are pursuing an agreement with the State Police to investigate officer-involved shootings where someone is injured or killed," Fischer spokeswoman Jessica Wethington said July 27. "Transparency is a priority of the administration and releasing body cam footage will be at the top of our list as we continue to work through the details with the state."

And on Monday, interim Police Chief Yvette Gentry said "we agreed to place these investigations in the hands of another agency as one initiative on the path to restoring trust between LMPD and our community."

But attorneys and First Amendment experts in the state immediately questioned the potential of improving transparency by bringing in Kentucky State Police.

While he is skeptical of LMPD investigating itself, Fleischaker has said sending Metro Police cases to KSP could turn a wait for answers from months into years. He warns that wait could have the exact opposite effect on public trust that Fischer claims to be seeking.

And KSP regularly sues citizens and the media to shield public documents even after the agency is told to turn them over by the Kentucky Attorney General’s Office, which acts as a referee when citizens and news organizations challenge state agencies for access to records.

KSP repeatedly lock records up in court battles for years and then pay thousands in fines with taxpayer money for the violations it racks up.

The head of the department, Rodney Brewer, announced he would step down just days later.

Still, Metro Council President David James said bringing in an outside agency to investigate LMPD shooting is a "great idea," especially in the wake of the Taylor case, and KSP should be judged on the results moving forward.

"We have gotten used to seeing the body cam within 24 hours, but I think 72 hours is better than nothing," James said.

KSP is one of the largest police agencies in the Kentucky, with access to the state’s crime lab, he said, which could expedite investigations.

"Overall, I’m hoping it will be a good thing for community and will help with our credibility, but it’s the first case, so we’ll have to wait and see."

Late Wednesday night, as the 72-hour deadline neared, Mayor Fischer's office released a statement, noting that the KSP investigation is "revealing differences in policies and practices" between the ways state police and LMPD conduct investigations, "including the timing of the release of body camera video."

Despite these differences, Jean Porter, director of communications for Mayor Fischer, went on to express his confidence in the integrity of the KSP investigation.

The full text of Porter's statement is below:

"After the Breonna Taylor tragedy and in response to community concerns about LMPD investigating its own shootings, the city approached KSP to provide an independent review of future officer-involved critical incidents while longer term options could be developed. A preliminary agreement with KSP was reached. The November 22 officer-involved incident was the first since that agreement. The transition from having LMPD lead the investigation to KSP is revealing differences in policies and practices, including the timing of the release of body camera video. While we value the transparency of sharing video quickly, we also value the independent investigatory approach that KSP provides. We have entrusted this investigation to the KSP in whom we have the fullest confidence. Any further questions about the investigation should be directed to the Kentucky State Police."