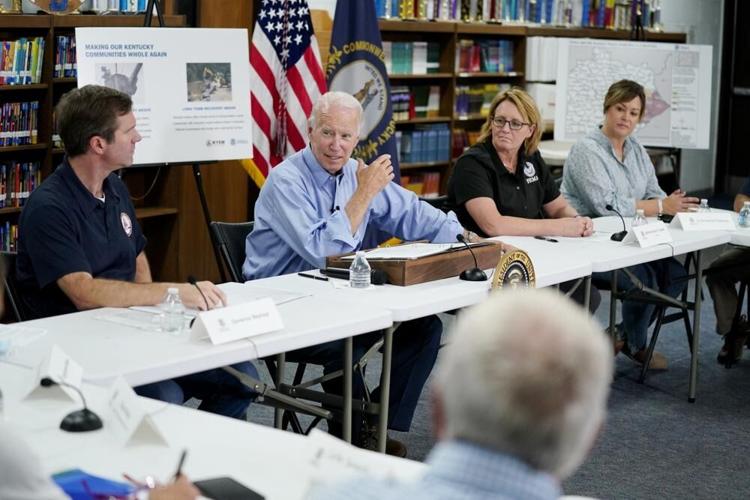 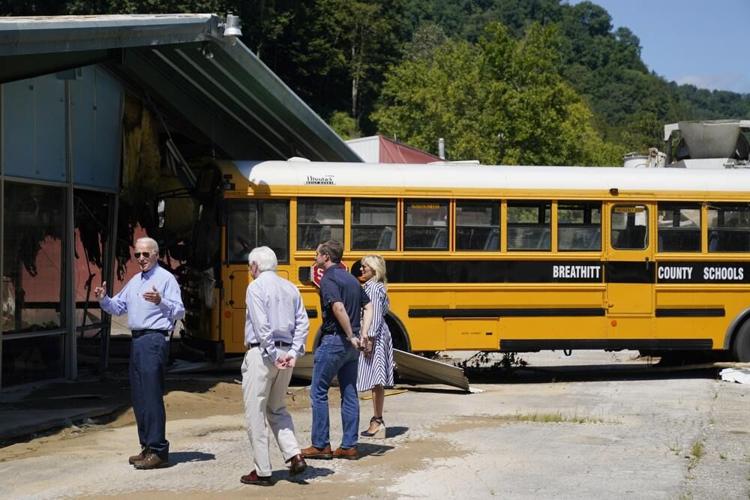 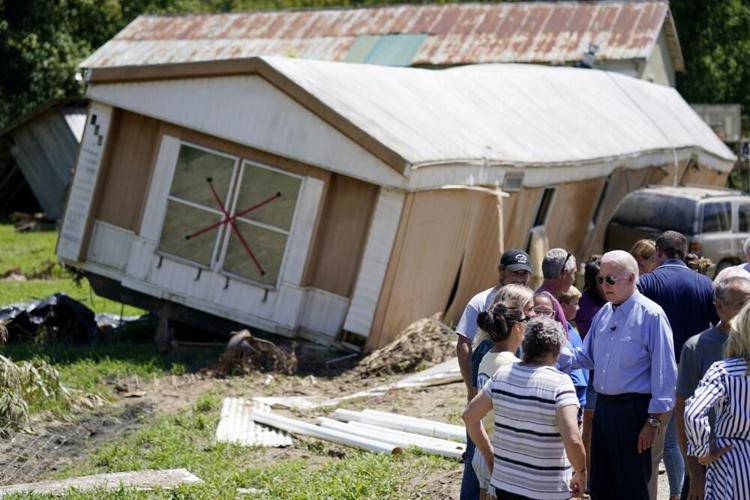 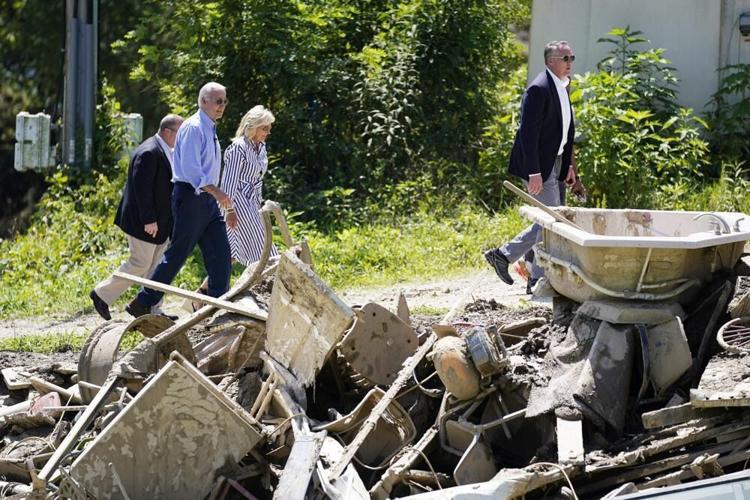 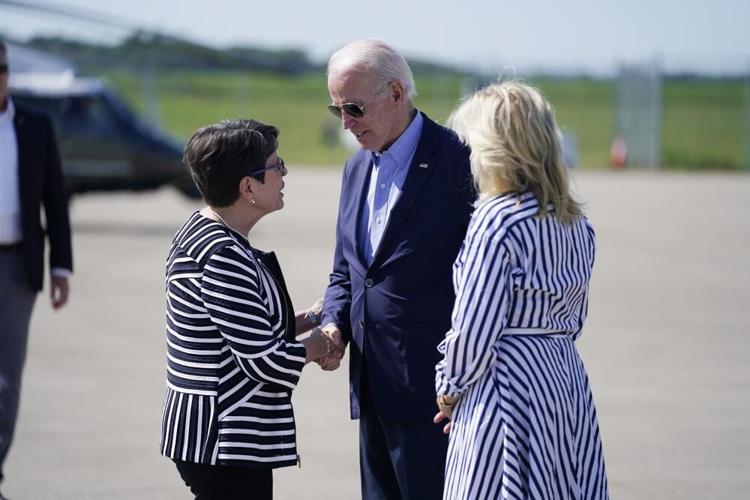 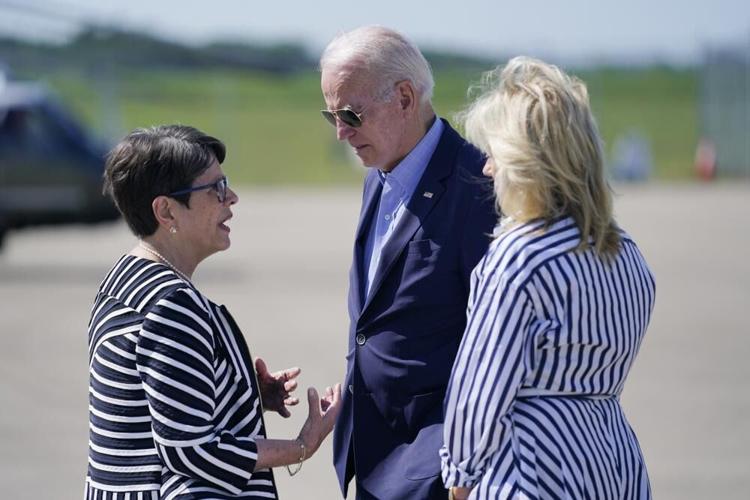 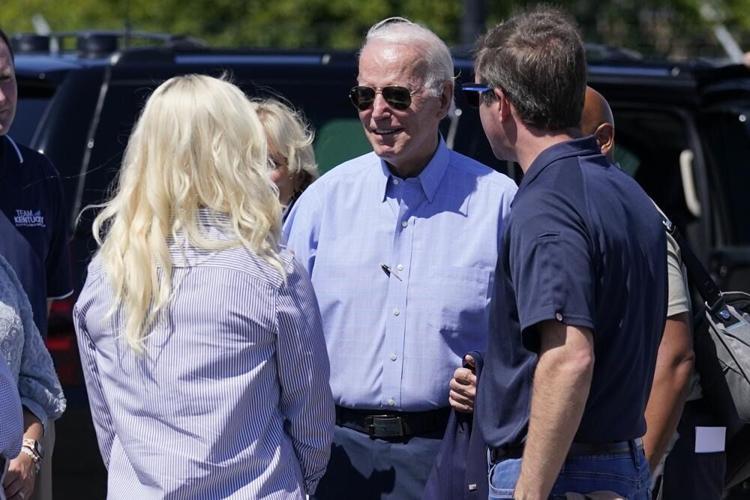 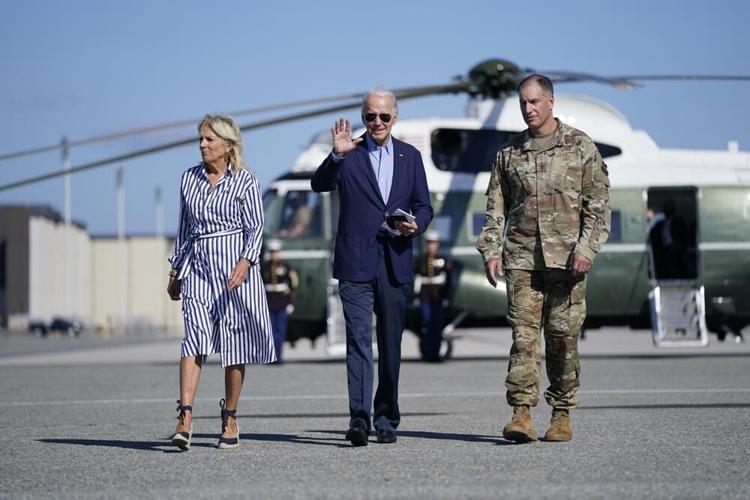 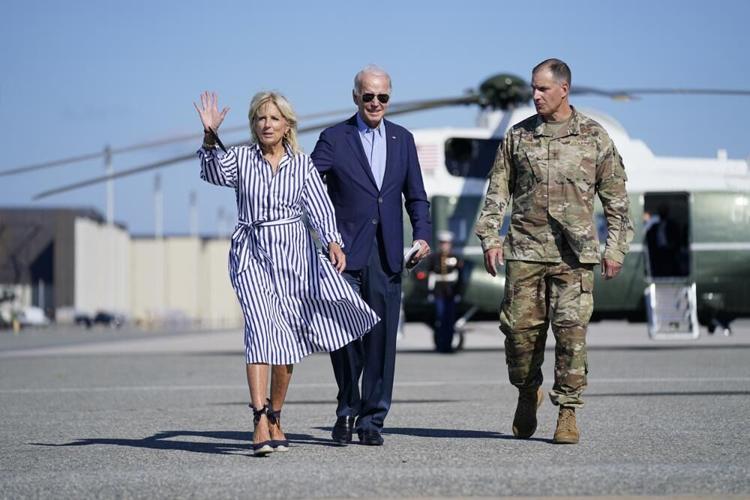 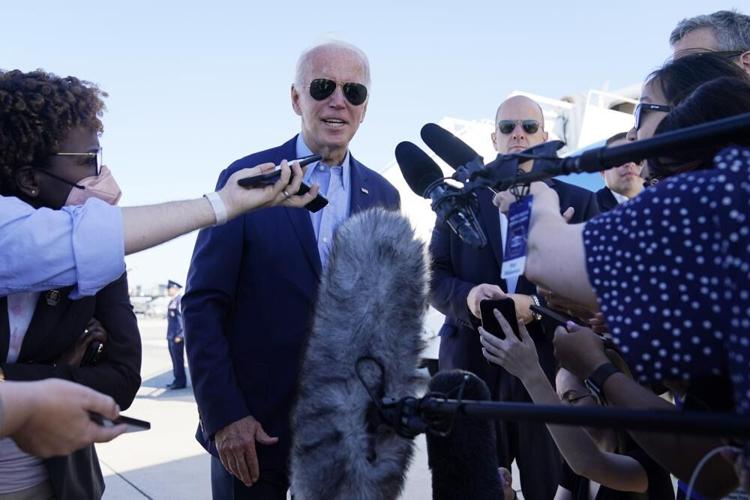 President Joe Biden speaks to the media before boarding Air Force One for a trip to Kentucky to view flood damage, Monday, Aug. 8, 2022, in Dover Air Force Base, Del. (AP Photo/Evan Vucci) 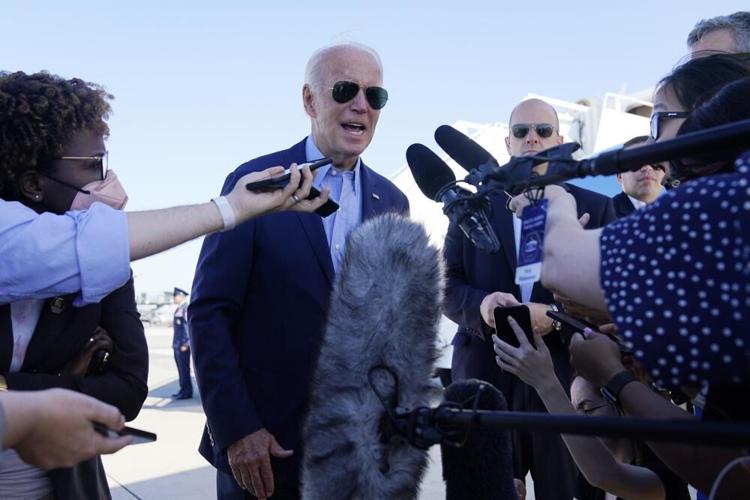 President Joe Biden speaks to the media before boarding Air Force One for a trip to Kentucky to view flood damage, Monday, Aug. 8, 2022, in Dover Air Force Base, Del. (AP Photo/Evan Vucci)

The president said the nation has an obligation to help all its people, declaring the federal government would provide support until residents were back on their feet.

LOUISVILLE, Ky. (WDRB) -- President Joe Biden and first lady Jill Biden on Monday witnessed the damage from deadly and devastating storms that have resulted in the worst flooding in Kentucky’s history, as they visited the state to meet with families and first responders.

At least 37 people have died since last month’s deluge, which dropped 8 to 10-1/2 inches of rain in only 48 hours. Gov. Andy Beshear told Biden that authorities expect to add at least one other death to the total. The National Weather Service said Sunday that flooding remains a threat, warning of more thunderstorms through Thursday.

The president said the nation has an obligation to help all its people, declaring the federal government would provide support until residents were back on their feet. Behind him as he spoke was a single-story house that the storm had dislodged and then left littered on the ground, tilted sideways.

President Joe Biden is in Eastern Ky right now to survey flood damages with Gov. Beshear. President Biden is expected to make remarks at 12:30. Thread for more on his visit @WDRBNews pic.twitter.com/VBsKgRBvO8

“We have the capacity to do this — it’s not like it’s beyond our control,” Biden said. “We’re staying until everybody’s back to where they were.”

In the summer heat and humidity, Biden’s button-down shirt was covered in sweat. Pacing with a microphone in his hand, he eschewed formal remarks as he pledged to return once the community was rebuilt.

“The bad news for you is I’m coming back, because I want to see it,” the president said.

The Bidens were greeted warmly by Beshear and his wife, Britainy, when they arrived in eastern Kentucky. They immediately drove to see devastation from the storms in Breathitt County, stopping at the site of where a school bus, carried by floodwaters, was crashed into a partially collapsed building.

Beshear said the flooding was “unlike anything we’ve ever seen” in the state and credited Biden with swiftly approving federal assistance.

He praised responders who “have moved heaven and earth to get where we are, what, about nine days from when this hit,” he said.

Attending a briefing on the flooding’s impact with first responders and recovery specialists at Marie Roberts Elementary School in Lost Creek, Biden told a delegation of Kentucky leaders that he would do whatever was necessary to help.

The president emphasized that politics have no place in disaster response, noting his frequent political battles with Senate Republican Leader Mitch McConnell of Kentucky. “We battle all the times on issues,” Biden said, but in helping Kentuckians rebuild, “we’re all one team.”

President Biden says he talked with victims of the flood who told him, ‘we Kentuckians don’t want to ask for too much.’ President Biden continues to say this is an American problem, we have an obligation to help. @WDRBNews pic.twitter.com/a5G190D5CU

Monday’s trip is Biden’s second to the state since taking office last year. He previously visited in December after tornadoes whipped through Kentucky, killing 77 people and leaving a trail of destruction.

Biden has expanded federal disaster assistance to Kentucky, ensuring the federal government will cover the full cost of debris removal and other emergency measures.

White House press secretary Karine Jean-Pierre said the Federal Emergency Management Agency has provided more than $3.1 million in relief funds, and hundreds of rescue personnel have been deployed to help.

“The floods in Kentucky and extreme weather all around the country are yet another reminder of the intensifying and accelerating impacts of climate change and the urgent need to invest in making our communities more resilient to it,” she said.

The flooding came just one month after Kentucky’s governor visited Mayfield to celebrate the completion of the first houses to be fully constructed since a tornado nearly wiped out the town. Three families were handed keys to their new homes that day, and the governor in his remarks hearkened back to a visit he had made in the immediate aftermath.

Now more disasters are testing the state. Beshear has been to eastern Kentucky as many times as weather permitted since the flooding began. He’s had daily news conferences that stretched to an hour in order to provide details and a full range of assistance for victims.

A Democrat, Beshear narrowly defeated a Republican incumbent in 2019, and he’s seeking a second term in 2023.

Polling has consistently shown him with strong approval ratings from Kentuckians. But several prominent Republicans have entered the governor’s race, taking turns pounding the governor for his aggressive pandemic response and trying to tie him to Biden and rising inflation.

Beshear comments frequently about the toll surging inflation is taking in eating at Kentuckians’ budgets. He has avoided blaming the president, instead pointing to the Russian invasion of Ukraine and supply chain bottlenecks as contributors to rising consumer costs.