LOUISVILLE, Ky. (WDRB) -- A federal judge in Covington ruled Thursday that Gov. Andy Beshear doesn't have the authority under state law to issue an executive order requiring masks be worn in Kentucky's schools.

A group of Catholic school parents in northern Kentucky sued the governor over his order, announced earlier this month in response to rising COVID-19 cases across Kentucky, especially among children.

"By virtue of the Governor’s likely unlawful issuance of Executive Order 2021-585, which requires plaintiffs, who are elementary school children, to wear masks at all times indoors while at school, plaintiffs face immediate harm to their emotional well-being and academic growth," Judge William Bertelsman wrote. "Such intangible and unquantifiable harm is irreparable because it cannot be measured or undone."

Crystal Staley, a spokeswoman for Beshear's office, said they've agreed with the plaintiffs to apply Bertelsman's ruling only to the Diocese of Covington and no other schools. The order does not supersede an emergency regulation requiring masks approved earlier this month by the Kentucky Board of Education, so it could only have effect on the state's private schools.

Staley said the ruling "could place thousands of Kentucky children at risk and undoubtedly expose them to the most dangerous version of COVID-19 we have ever seen.

"The court ruled without hearing from the Governor and with absolutely no consideration of the consequences of exposure and quarantine that we will see – especially at a time when we are nearly out of staffed hospital beds statewide. Nor was the court provided the Franklin Circuit Court’s injunction of the legislation at issue. We will pursue every avenue and option to ensure that we can protect Kentucky’s children." 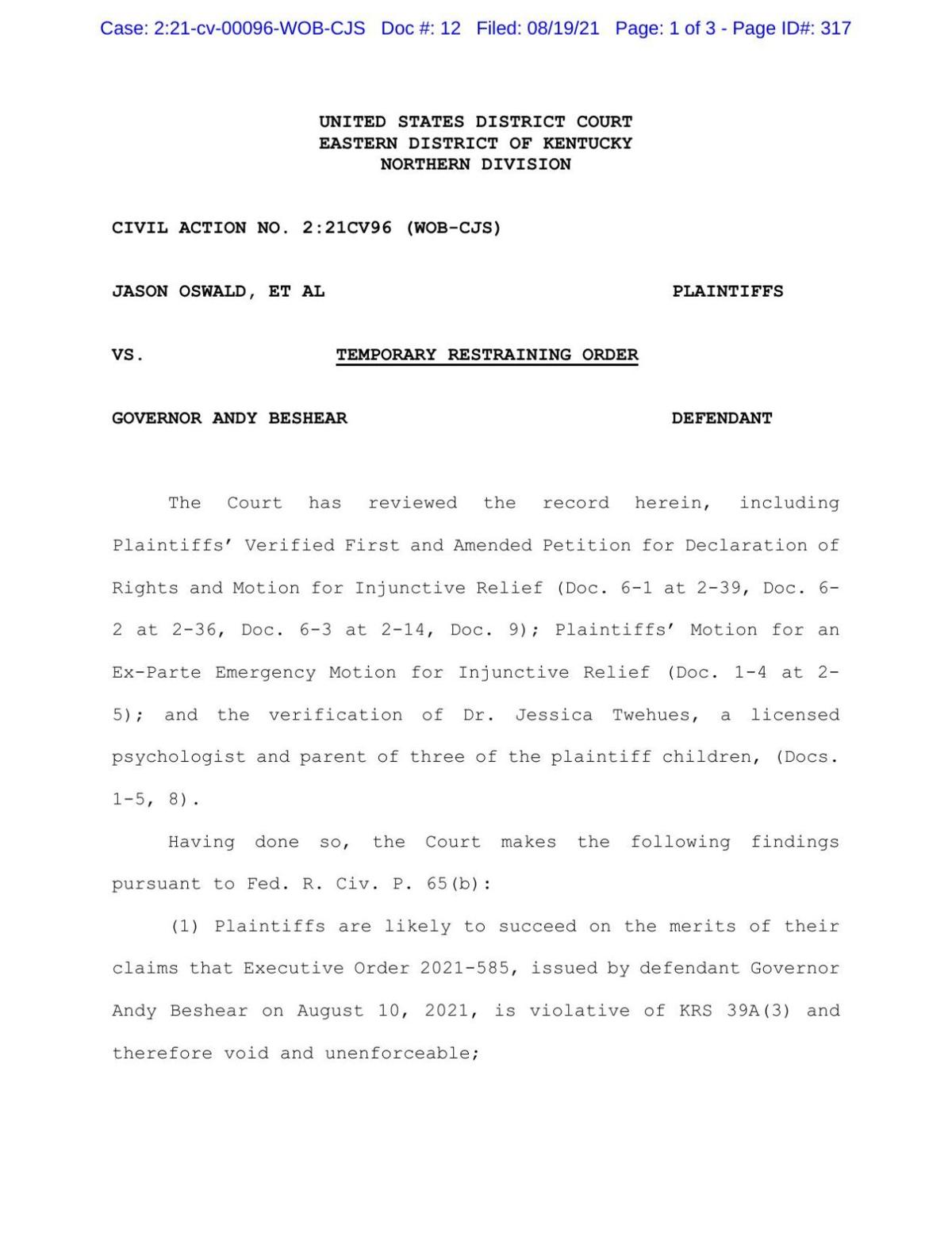 Bertelsman’s opinion said the governor’s Aug. 10 order declaring a state of emergency due to COVID-19 and a mandate for masks to be worn in all Kentucky K-12 schools violated state law that requires the General Assembly’s approval for such measures. He compared the situation to tyranny in his opinion.

"The Executive Branch cannot simply ignore laws passed by the duly-elected representatives of the citizens of the Commonwealth of Kentucky. Therein lies tyranny," Bertelsman wrote. "If the citizens dislike the laws passed, the remedy lies with them, at the polls. Therefore, having reviewed the record, the Court finds that plaintiffs’ emergency motion for a temporary restraining order is well taken."

Bertelsman set a hearing for 1 p.m. Tuesday in Covington to argue if the temporary restraining order should stay in effect.