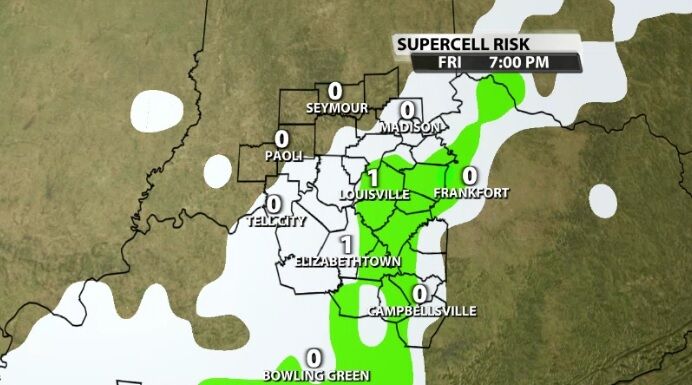 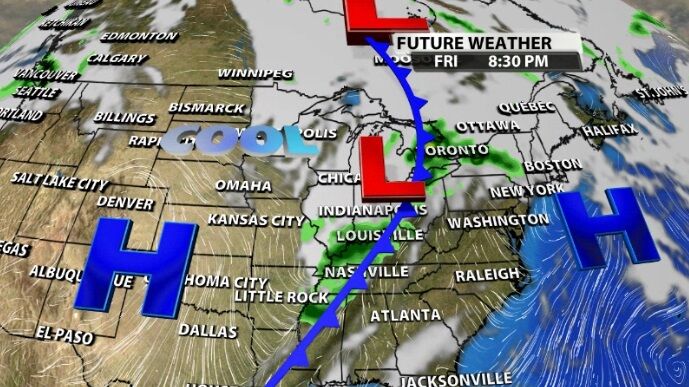 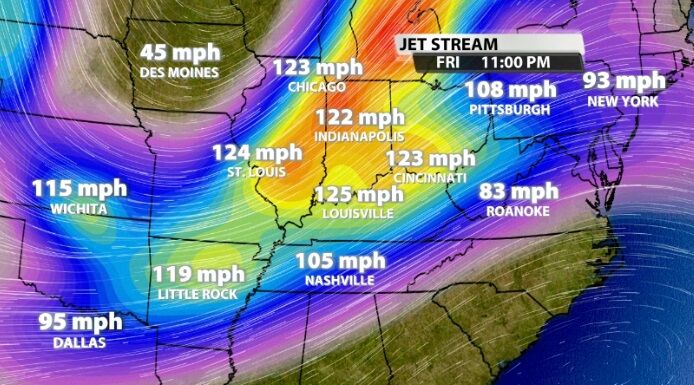 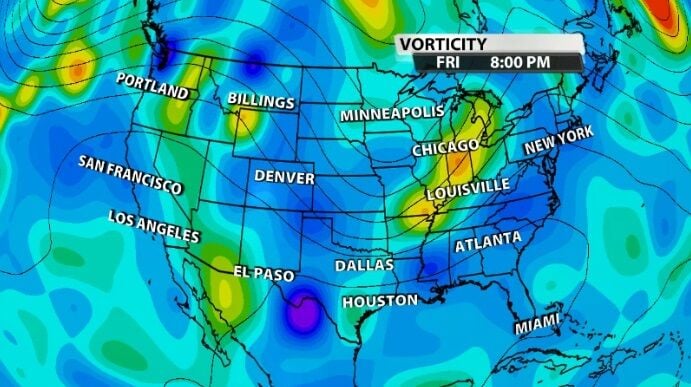 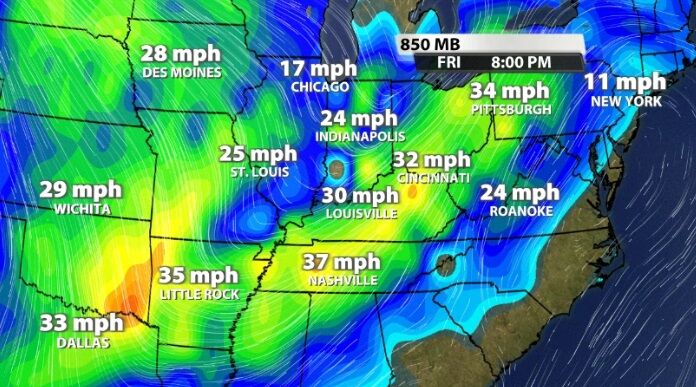 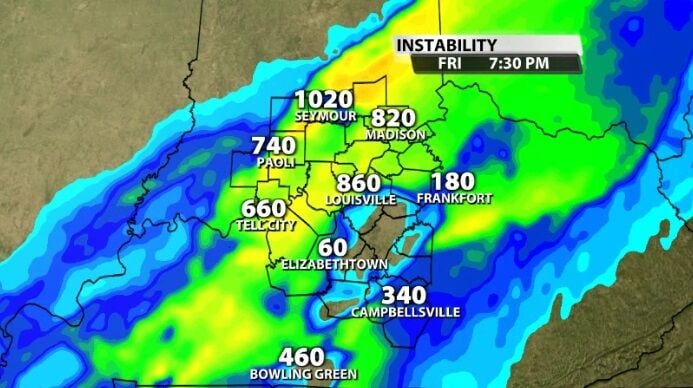 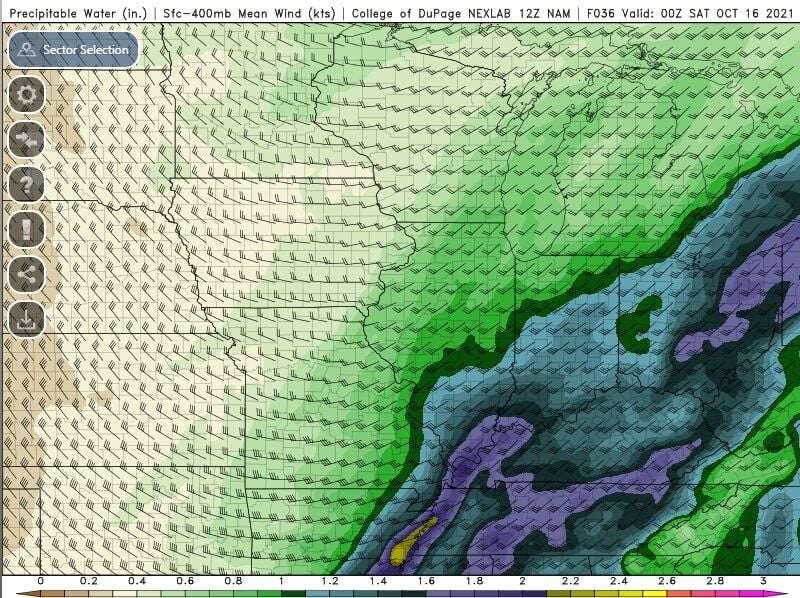 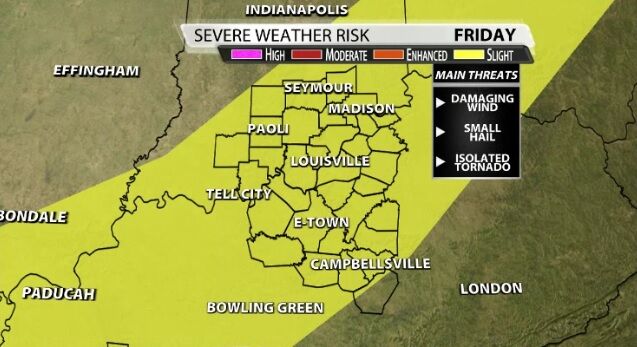 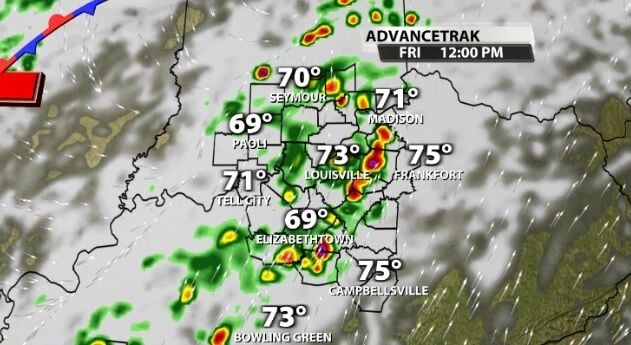 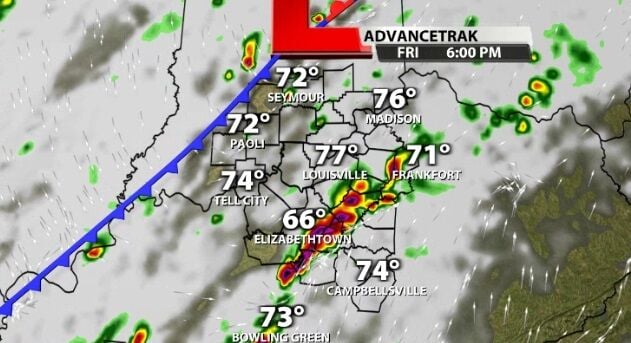 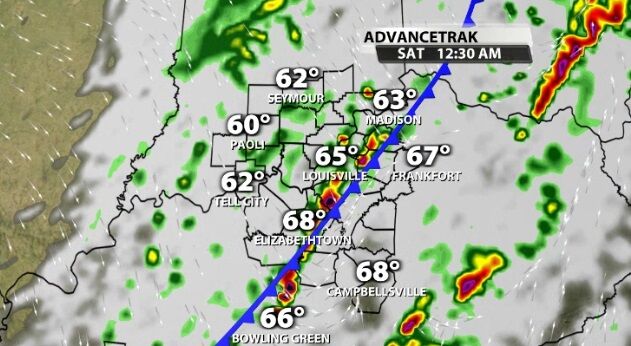 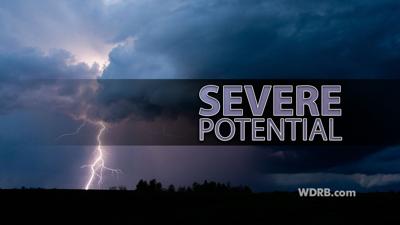 The Storm Prediction Center has added our area to a Slight Risk of severe storms Friday afternoon and evening. The yellow bubble represents level 2 out of 5, so this is not going to be the biggest storm threat you've ever seen. We might catch a few strong or even severe storms Friday night, so let's look at what is setting up.

At the surface a cold front is swinging through our area. Think of this cold front as a wall between two different kinds of air: warm, humid air on this front side (where we are now) and cooler, drier air on the other side (which we will feel this weekend). But that is only one factor in play here.

The latest runs of the more short-range models (which usually handle these systems better) are hinting the low that is farther to the south in the image above may do something funky with our wind. It's not showing up in every run of all the short-range CAMs (convective allowing models), but this is something to watch for in the new runs tonight, especially in the NAM. If that low slides through western Kentucky into southwestern Indiana, it may be able to "back" our wind here. If that happens, our wind profile turns and changes speed as you go higher up in the sky. That is wind shear; when the surface wind is backed and you have decent wind shear through the atmosphere, you can get some tornadoes. The backed wind means you can get rotating columns of air in the atmosphere and the shear means you can tilt those more vertically to get a tornado. This is the trickiest part of this whole forecast, so it's not a guarantee we will see things spin. However, as we were digging through the data this afternoon making our forecast, we saw something in the sounding that caught our attention. This pattern is called VBV or Veer Back Veer. Basically it means that the wind is moving in such a way at the lowest levels to create horizontal rotating tubes, but then the wind moves in the exact opposite direction inhibiting that rotation. On a hodograph it looks like sharper cuts instead of a smoother curve that would suggest more tornadic potential. This wind signature in the lower and middle levels would allow for some rotation, but would hinder tornado development. All that to say, we can't rule out the possibility of isolated tornadoes in this setup, but it is not the main threat tomorrow.

Ok let's get back to our regular analysis of the atmosphere. We start in the upper-most level where we watch for weather factors. Here we find the jet stream. The two things worth noting in the image above are the trough (the U shape in the white wind lines just west of us) and the jet streak (an area of stronger wind embedded within the overall flow pattern). The jet streak on this side of the trough means the wind is diverging in this upper level; above our heads the air is moving out faster than it's moving in.

Moving down toward the middle levels we are looking at vorticity. While this doesn't connect directly to tornadoes, this does look at spin in the mid-levels. It also helps us see where there is likely some vertical movement in the atmosphere instead of just horizontal movement. The bright colors over our area and just west of here in the image above lined up next to darker colors just east of us mean we will see positive vorticity advection,

Next up (or down I guess) is the low level jet. When we tell you "wind is the main threat," this is often why. The numbers don't look crazy strong here, but there are some hints that a shortwave may increase the wind speed in this level earlier in the day on Friday prompting some weaker storms through the late morning and early afternoon.

There's a good amount of water available here, so when you see one of these storms expect heavy rain to come with it. The map above shows precipitable water in the atmosphere - how much water is available to fall as rain. This is *NOT* a forecast of rain totals, they don't mean the same thing, but it shows that we have a lot of moisture in play.

Instability is there but not great. That's the map you see above. With limited CAPE, we would not expect significant hail from this so that's a pretty low threat. This event will be mainly driven by wind.

When you see the storms come through, they will mostly form up into some sort of line. However, it is possible we could see some stronger cells embedded within that line pattern. That's what the supercell composite map above shows you. That could turn this more into a QLCS type event - quasi-linear convective system, meaning "sort of a line but also some cells" storm system. That overall structure (line vs. cells) also contributes to what threats may be possible.

While we do expect to see some showers and weaker storms earlier in the day, the window for the stronger (potentially severe) storms will be 6 PM - 2 AM. Any later than that, we have run out of energy from daytime heating and the front has moved far enough along to significantly drop the chance for storms.

Temper your expectations. While we do expect some strong storms, many of you will not get warnings from these storms. Thunder and lightning with heavy rain are likely. Damaging wind gusts are the main threat in the stronger storms.