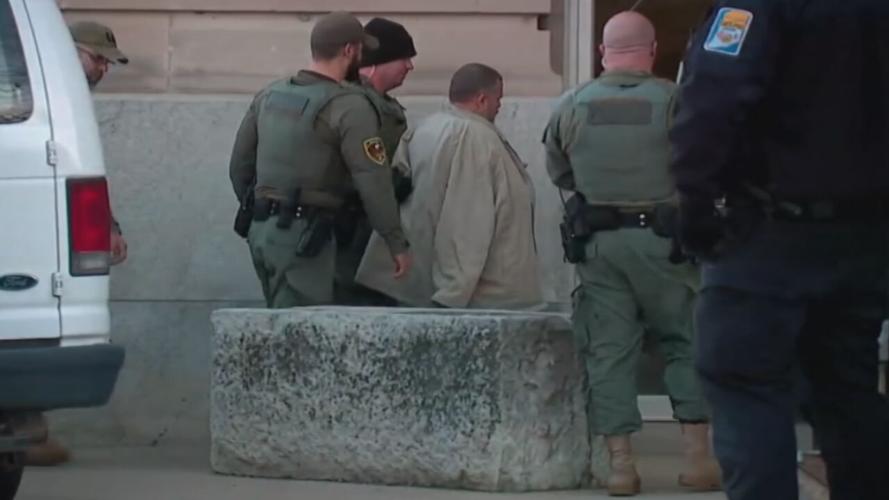 This image taken from video dated Nov. 22, 2022, shows Richard Allen being led into the Carroll County courthouse with his arms and legs shackled. (FOX59) 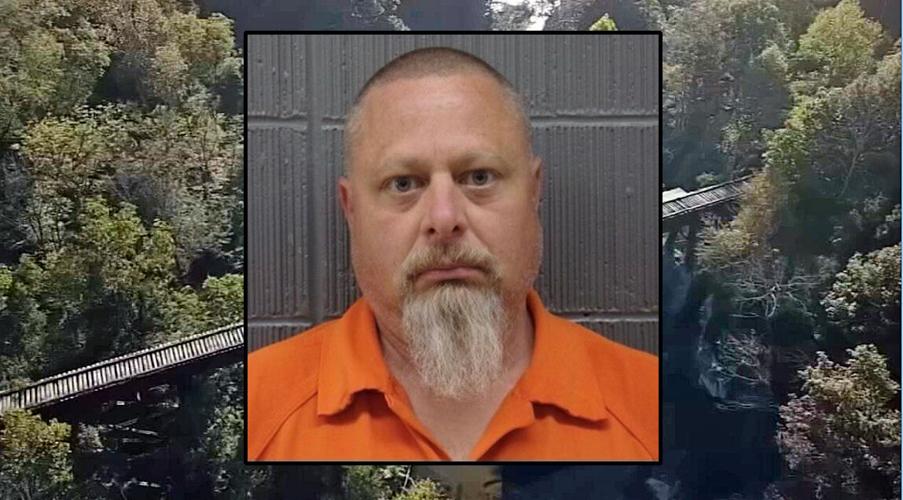 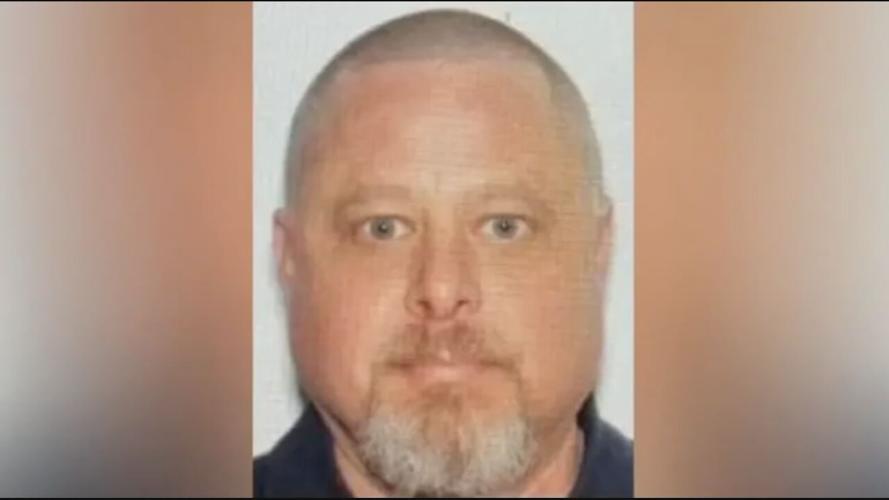 This undated booking photo shows Richard Allen, the man charged with killing two teens who disappeared while walking on a trail in Delphi, Ind., on Feb. 13, 2017. (Indiana State Police)

Investigators say two crucial pieces of evidence tie Richard Allen to the Feb. 2017 murders of two teenage girls in Delphi, Indiana: Allen's handgun and an unspent .40 caliber round found near one of the bodies.

LOUISVILLE, Ky. (WDRB) -- Investigators say two crucial pieces of evidence tie Richard Allen to the Feb. 2017 murders of two teenage girls in Delphi, Indiana: Allen's handgun and an unspent .40 caliber round found near one of the bodies.

That information was unveiled in redacted court documents released Tuesday afternoon that shed significant new details on the case.

Allen was arrested on Oct. 31 for the murders of 14-year-old Liberty "Libby" German and 13-year-old Abigail "Abby" Williams. The two girls went walking in the woods in Delphi, Indiana, on Feb. 13, 2017, when they went missing. Their bodies were discovered the next day, on Feb. 14, in the woods, just northeast of the Monon High Bridge in Carroll County, Indiana.

The Oct. 31 arrest of Allen raised a slew of questions about the case, many of which could not be answered because the probable cause affidavit -- the legal document that explains the evidence pointing to Allen -- had remained sealed.

According to investigators, police believe Williams and German were dropped off across from the Mears Farm at 1:49 p.m. on Feb. 13 -- that's near an entrance to the trails.

Police were able to obtain a video taken on one of the teens' mobile devices at about 2:13 p.m. in which the girls encounter a man just southeast of the Monon High Bridge.

According to the video, that man was wearing a dark jacket and jeans.

As he walks toward them, one of the girls says the word "gun." Near the end of the video, the man gives an order to the girls, saying, "Guys, down the hill."

According to the probable cause affidavit, the girls' bodies were found the next day. Investigators also found other items of interest, including an unspent .40 caliber round two feet away from one of the bodies, as well as items of clothing belonging to both of the teens in the nearby Deer Creek.

Court documents reveal other new details. Police interviewed three juveniles who said they were on the Monon High Bridge Trail that same afternoon and encountered a man they describe as, "kind of creepy." They said he was wearing, "like, blue jeans, a, like, really light blue jacket and he -- his hair -- was gray, maybe a little brown. And he did not really show his face."

One of the juveniles said she said "Hi" to the man as they passed, but he just glared at them. She said he was all in black and had something covering his mouth.

According to court documents, two people -- a man and a woman -- reported seeing what they described as an oddly parked vehicle at the Child Protective Services building, near the bridge, on Feb. 13 -- the day the girls went into the woods. The woman said the vehicle was oddly parked because it was backed in near the building. The man gave a similar report, adding that it looked like it was parked in such as way so as to intentionally conceal the license plate.

Police also spoke to a woman who said she was driving eastbound on 300 North on Feb. 13. According to the affidavit, she said she saw a man walking,  wearing a blue colored jacket and blue jeans who was muddy and bloody.

"She further stated that it appeared he had gotten into a fight," the affidavit states.

An officer identified Allen as someone who was on the trail that day and interviewed him back in 2017. That officer provided a brief summary of that interview:

"Mr. Allen was on the trail between 1330-1530. He parked at the old Farm Bureau building and walked to the New Freedom Bridge. While at the Freedom Bridge, he saw three females. He noted one was taller and had brown or black hair. He did not remember description nor did he speak with them. He walked from the Freedom Bridge to the High Bridge. He did not see anybody, although he stated he was watching a stock ticker on his phone as he walked. He stated there were more vehicles parked at the High Bridge trailhead, however, did not pay attention to them. He did not take any photos or video."

Investigators discovered that Allen owned a 2016 Ford Focus that was similar to the description of the vehicle witnesses say was oddly parked at the Child Protective Services building.

But according to court documents, investigators began to piece the case together just last month, when they interviewed Allen again. He told them he was wearing blue jeans and a blue or black jacket with a hood -- and may have had some kind of head covering. He denied seeing anyone other than the three juvenile girls just east of the Freedom Bridge.

Both he and his wife told investigators that he owned weapons.

That same day, on Oct. 13, 2022, investigators executed a search warrant at Allen's Delphi home. According to court documents, they seized, among other things, jackets, boots, knives and firearms, including a .40 caliber Sig Sauer pistol.

That latter item proved to be of crucial significance, according to court documents.

Investigators say the Indiana State Police Laboratory performed an analysis of the pistol.

In short, the lab found that the round had been inside Allen's gun.

Investigators confronted Allen with this evidence when he voluntarily showed up for an interview on Oct. 26.

"He spoke with investigators and stated that he never allowed anyone to use or borrow the Sig Sauer Model P226 firearm," the affidavit states. "When asked about the unspent bullet, he did not have an explanation of why the bullet was found between the bodies of Victim 1 and Victim 2. He again admitted that he was on the trail but denied knowing Victim 1 or Victim 2 and denied any involvement in their murders."

The affidavit goes on to state that, based on the evidence, investigators believe Allen is the killer.

"Carroll County Sheriff's Department Detective [NAME REDACTED] has been part of the investigation since it started in 2017," the affidavit states. "He has had an opportunity to review and examine evidence gathered in this investigation. Detective [NAME REDACTED], along with other investigators, believe the evidence gathered shows Richard Allen is the male subject seen on the video from Victim 2's phone who forced the victims down the hill. Further, that the victims were forced down the hill by Richard Allen and lead [sic] to the location where they were murdered."

Police believe Allen was the one the three unnamed juveniles encountered at the bridge. They believe it was his vehicle that was "oddly parked" near the Child Services Building. And they believe the woman who saw a man walking along 300 North on Feb. 13 was seeing Allen, who was muddy and bloody after the murders.

The redacted probable cause affidavit is below: 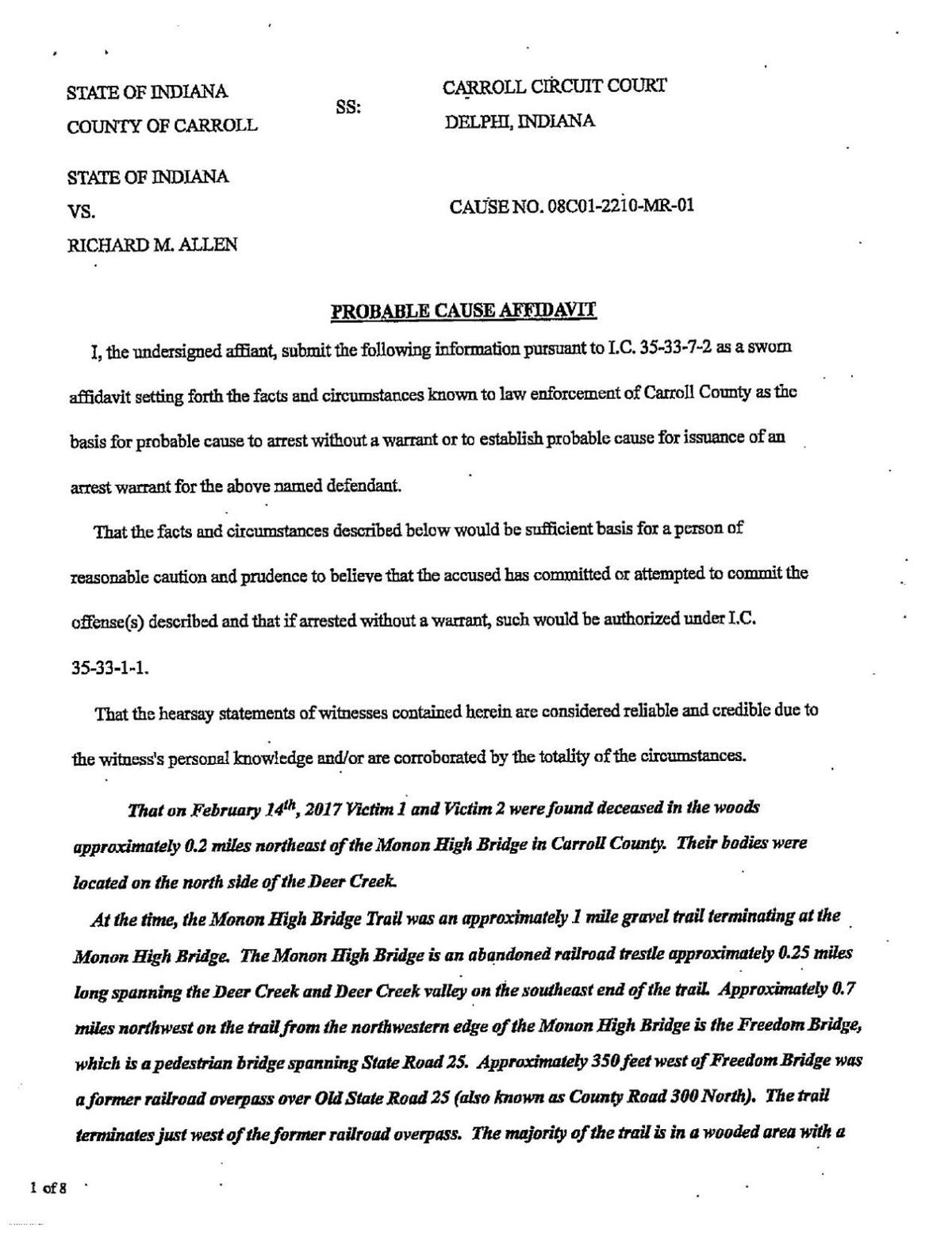